Living in Lincolnshire days in the mountains (particularly The Highlands) are few and far between and as a result I spend hours pouring over maps, guide books and this website planning the next trip. With time booked off work at the end of July the intention was to have a few days north of the Border to get Tower Ridge and the In Pin off the "bucket list". I was just a little apprehensive about how my knee would cope following surgery at Easter!
Leaving home on Friday morning the weather forecast for the next few days looked reasonable but unfortunately the traffic wasn't! Why is it that the authorities seem to store up road works for busy holiday weekends? After nearly 8 hours in the car we arrived at Fort William with the campsite bathed in evening sunshine allowing the tent to be pitched and tea cooked in the dry. Always a bonus!
Saturday 25th July
Saturday morning dawned fine and with MWIS forecasting a decent day but with a risk of showers later we set off from the campsite in Glen Nevis to join the crowds climbing the "tourist route" It was a relief to fork left onto the path toward the CIC Hut which we had to ourselves. Good progress was made in sunshine with a good view of the days objective: 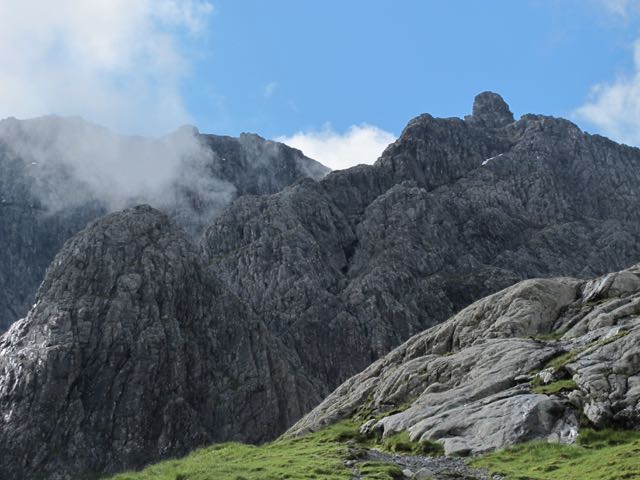 The original intention was to climb the Douglas Boulder direct but it all looked rather wet so we decided to wimp out and skirt round and climb up to the Boulder Gap. Unfortunately, I thought the gully was on the west side of the ridge, big mistake! What ensued was a horrible wet, slimy and loose struggle, and on arrival at the gap I realised the error of my ways, we should have gone round to the east! Anyway no harm done although a lesson learnt, memorise the route or take the guidebook

Climbing out of the gap is polished but straightforward and we didn't feel the need to get out the rope. On arrival the crest of the ridge was in sunshine with fabulous straightforward scrambling toward the Little Tower and great views back to the top of the Douglas Boulder, Allt a'Mhuilinn, Carn Mor Dearg and on up the ridge toward the Little Tower: 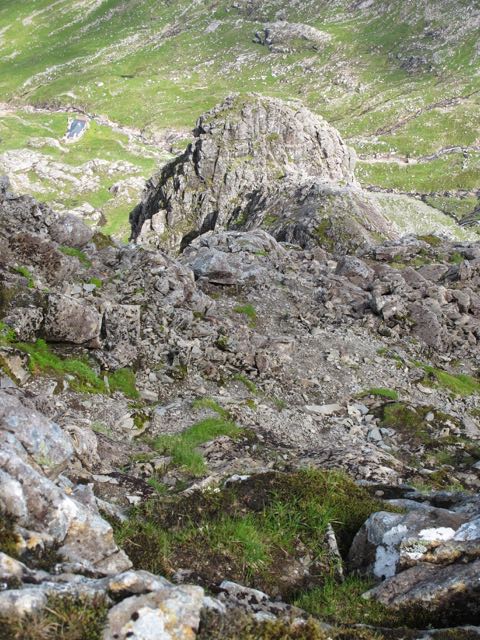 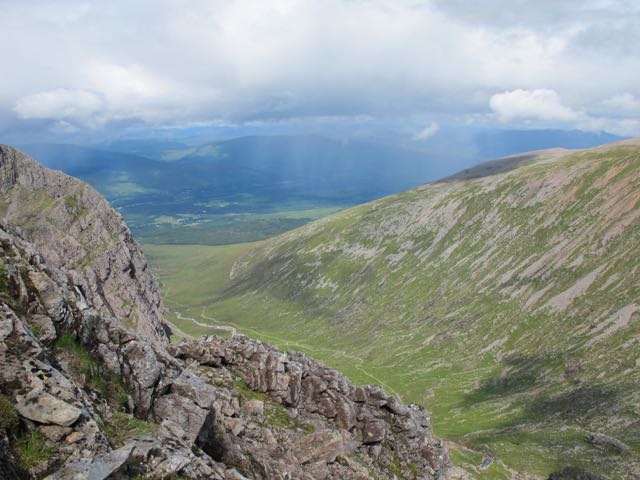 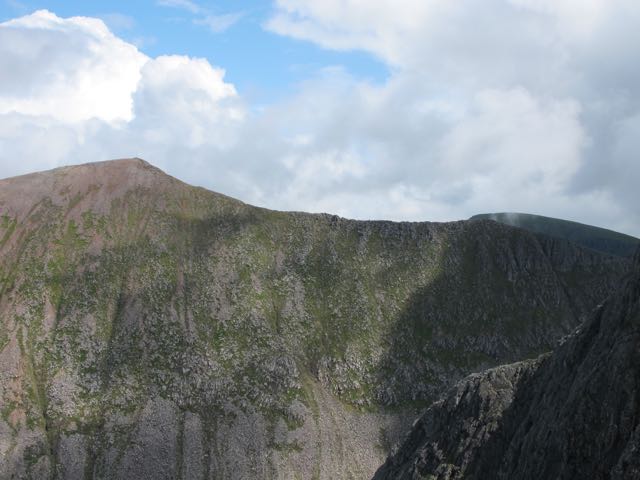 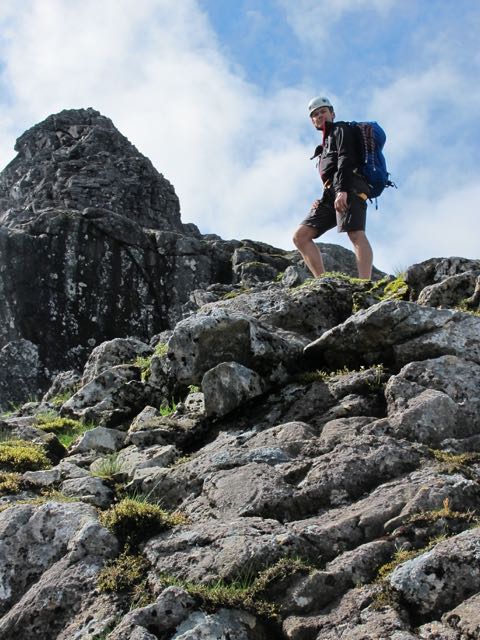 At the base of the Little Tower and with the rock wet following a squally shower we decided that the rope would be prudent. I suspect that we might have got a bit off route (felt harder than Diff) although a few old, but sound, pegs provided confidence.
From the top of the Little Tower you get the first real view of the Great Tower - it looks very steep and rather intimidating. Don't be tempted to skirt round to the right (we were!) but follow the crampon scratches and scramble up rock steps until the Eastern Traverse is reached - you can't miss it. The "cave pitch" is awkward rather than difficult particularly with a rucksack - definitely contortionist territory.
Unfortunately, the promised showers arrived and we reached the top of the Great Tower rather bedraggled. There were glimpses of the summit plateau through the cloud and it was apparent that we had an audience. Tower Gap certainly didn't dissapoint, not for the faint hearted or suffers of vertigo

but once past it is a simple scramble to the summit plateau where we were greeted by a very tame Snow Bunting.
In my opinion Tower Ridge is definitely deserving of its "classic" reputation as one of the very best mountaineering days out in the UK. Whilst not particularly difficult, it is long and certainly a climb rather than a scramble. That being said, it is definitely a route to aspire to and well worth the effort.
Sunday 26th July
With the first objective completed the tent was packed and we headed for Skye. At Sligachan we pitched the tent again to let it dry out. Is there a better view from a campsite? 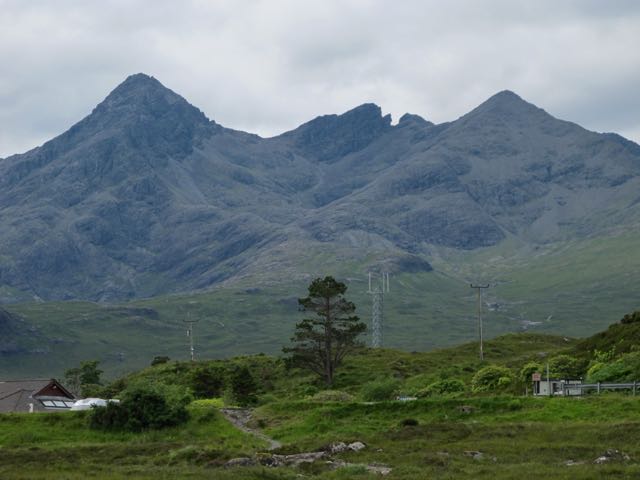 The weather did not look particularly promising but we set off for an afternoon in the Red Cuillin. After a rather unpromising and boggy start the north ridge of Sron a'Bhealain led to the delightful saddle of Druim na Ruaige with views south to Marsco and Bla Bheinn: 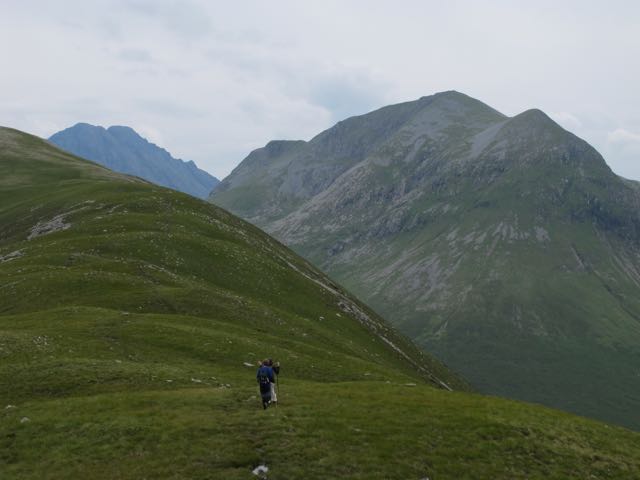 A steep pull led to the summit of Beinn Dearg Mheadhonach, with views to the next objective Beinn Dearg Mhor with Glamaig behind: 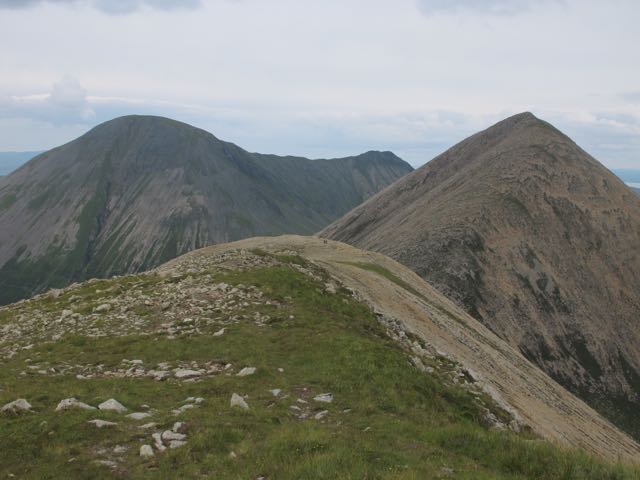 The summit of Beinn Dearg Mhor was unexpectedly fine with great views to Bla Bheinn and Soay to the south, Loch Ainort and Scalpay to the east and Glamaig and Storr to the north: 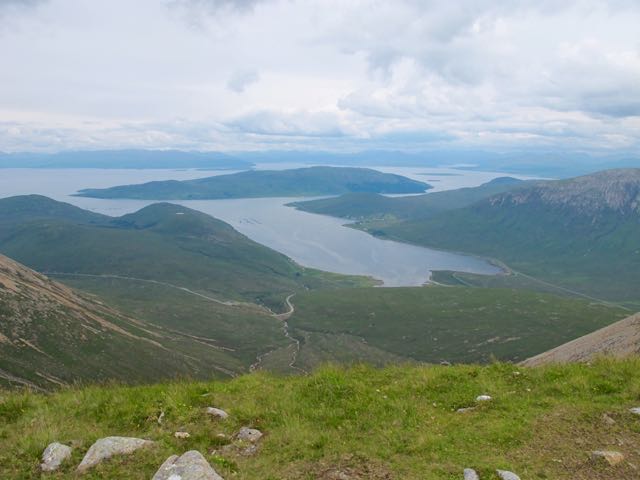 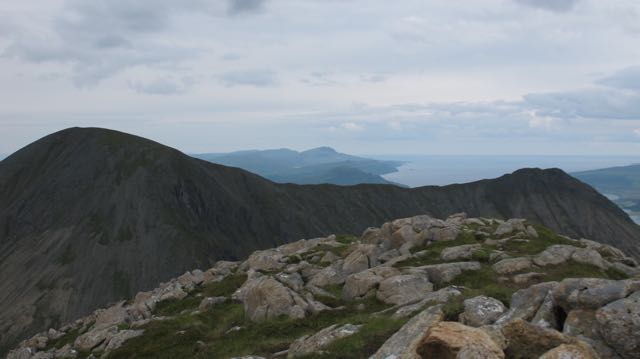 However, all seems overshadowed by the main Cuillin Ridge to the west. This panorama from Sgurr Alasdair to Sgurr nan Gillean looks better to me in black and white: 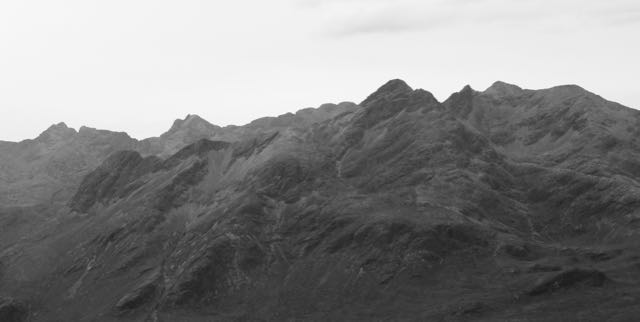 A steep descent down scree slopes to the north soon led to the Coire na Sgairde and back to Sligachan.
I have looked up to the Red Hills before but this is the first time I have walked them having previously succumbed to the draw of the main Cuillin Ridge and Munro's. However, I can well recommend spending some precious time on Skye amongst these rewarding hills.
A look back to the afternoons walk from the campsite: 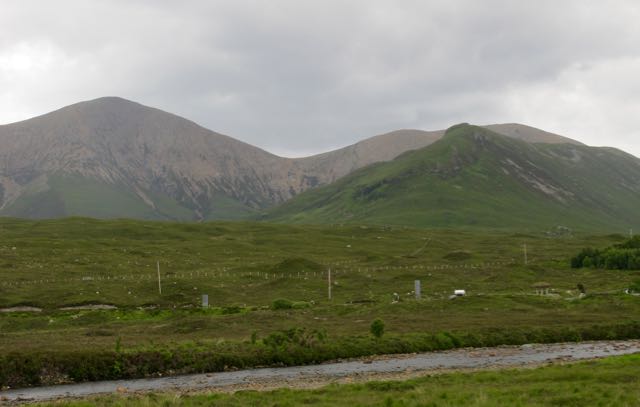 Monday 27th July
Our final objective for the week was the In Pin and we decided to approach by way of Bealach Coire na Banachdaich. It was a wet night but the rain had stopped by the time we reached The Memorial Hut in Glen Brittle although it was a grey day with the summits in cloud. The ascent route turned out to be a good choice with a clear path branching off the main Coire Lagan path just after Eas Mor climbing steadily with the Banachdaich Gully and Window Butress clearly visible ahead and good views back to Glen Brittle. 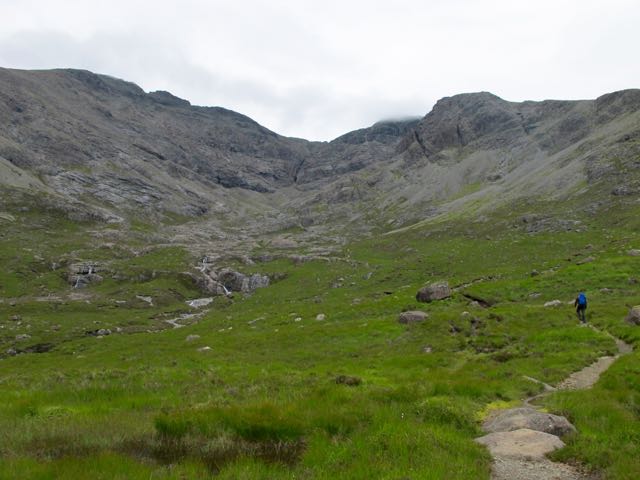 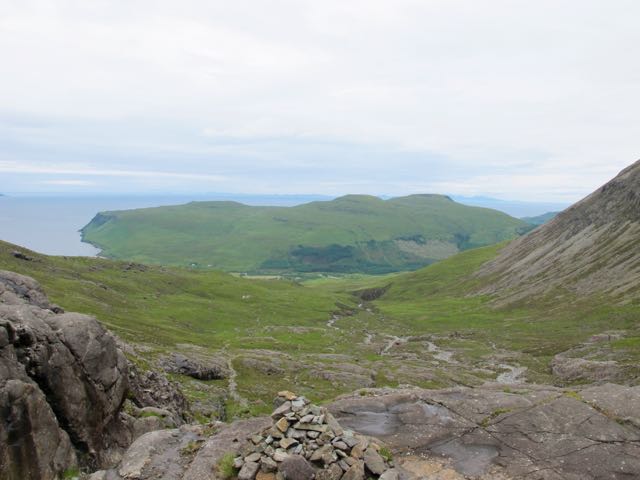 The scrambling in the upper part of the coire is straightforward with the route well marked by cairns and we reached the bealach in about 2 hours from the car. The final pull up to Sgurr Dearg was a bit of a slog not helped by the fact that by this time we were in swirling mist. Once at the summit the west face of the Pinnacle loomed out of the cloud, a truly impressive sight! 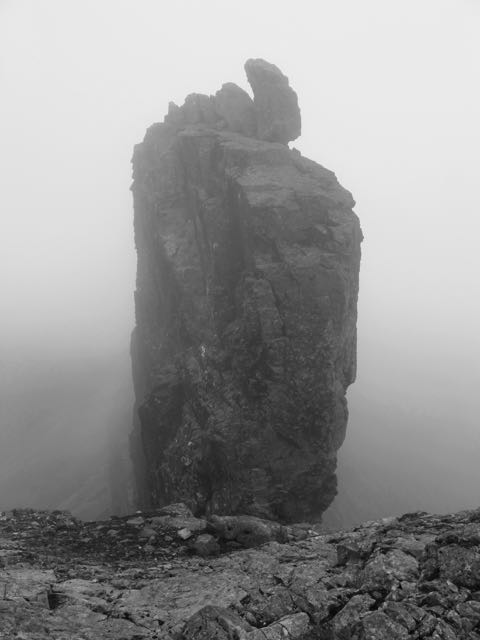 We climbed down to the bottom of the East Ridge where two other guys were about to start the climb. The route itself lives up to its reputation as the scariest moderate in the world - the exposure is sensational and I was surprised at the amount of loose, or at least wobbly, rock. We climbed quickly as it was cold, windy and a bit wet and two pitches later we were at the summit with fleeting glimpses into Harta Corrie through the cloud. Whilst I have a dislike of abseiling, the chain around the Bolster Stone makes the descent secure and easy to set up and we were soon back down at the bottom of the west face with the final objective of the week completed.
We descended via the SW Ridge over Sgurr Dearg Beag the initial scrambling on the crest of the ridge is good fun and once we dropped below the cloud we enjoyed views to Rum and the Hebrides. 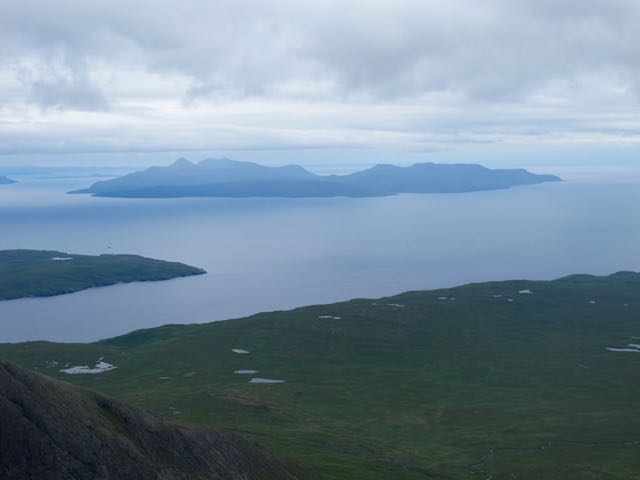 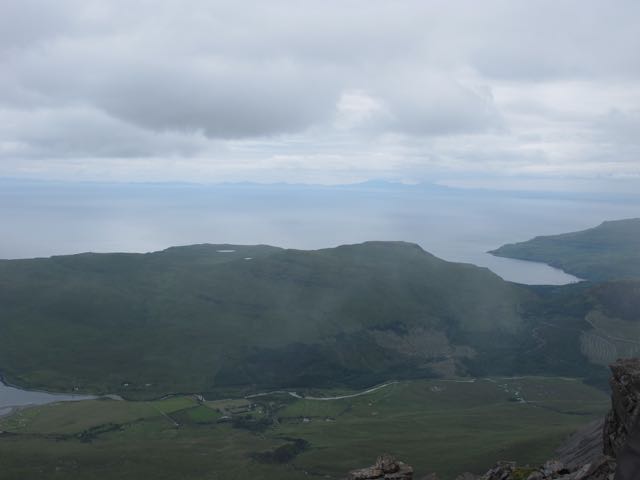 The final descent from Sron Dearg is tiresome steep scree, we definitely chose the right way to climb up in the morning. The day was capped off watching a Golden Eagle soaring over Glen Brittle what fantastic birds they are!
In all three very good days with both major objectives achieved and the knee still more or less intact! Now starts the job of planning for the next trip - Tower Ridge next winter?

...and it's my big wish and hope to catch an Golden Eagle by camera

Outstanding stuff! I was especially impressed with your ascent of Tower Ridge.

Hello,
As an alternative to the grotty gully on the West side ( never been in there)

I did once reach the top of the DB, as a start to the continuing up the ridge, by way of the SW Ridge of DB which was about Moderate.
The East side gully to the gap is pleasant way to reach the start of the Ridge proper.

dav2930 wrote:Outstanding stuff! I was especially impressed with your ascent of Tower Ridge.

Didn't find the rock too bad when it was wet but there is an awkward sloping slab just below the Little Tower that is a bit slippery. If doing solo I suggest that you would want a couple of grades headroom for the Tower Gap - not a recommended place to slip!

An excellent trip that on some of the best hills in Scotland, not usually seen in one report!