Picked out the Clais Fhearnaig circuit for today, was feeling I had made the wrong choice when I was traveling up because Lochnagar looked beautiful! But no doggy sitter fore retired-doggy today so no long walks, as it was I really enjoyed the walk I had chosen!

I started not long after 7am and having read previous reports about the bridge being out I took the turning to the left just after the parking area and headed uphill. It was a good choice because not far along the trail was this sign saying that the bridge had been destroyed (though no mention of this on the noticeboard!) 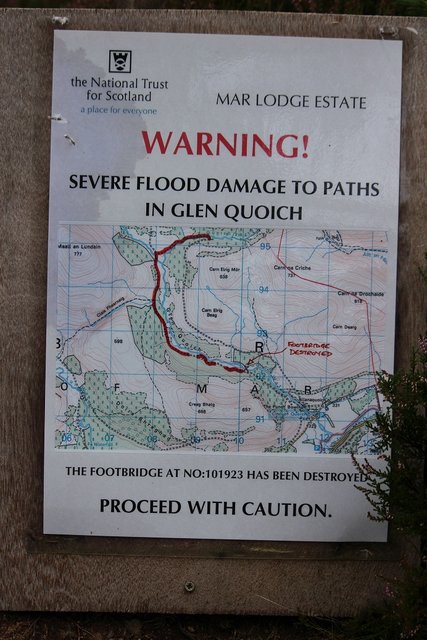 Warning notice partway up the route

The notice also had marked areas of severe damage to the path, but I was there so I continued on regardless and for the most part the path was fine until we reached a section where the river split creating an island in the middle. There were gouges in the track and a bit further along the track had gone completely. There was a narrow trail at the side that people were using to get round, it did the job though wouldn't fancy it in icy or snowy conditions. 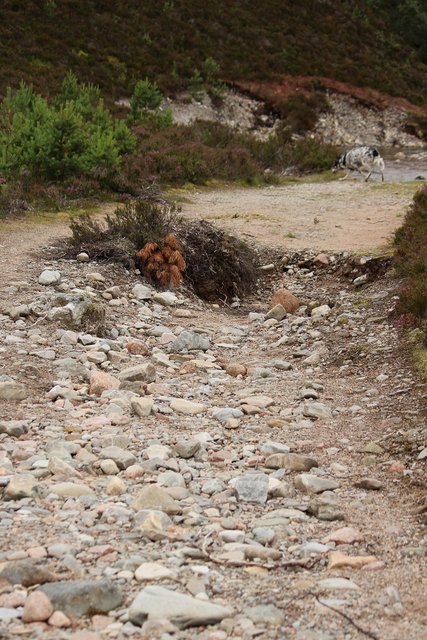 Gouges in the path 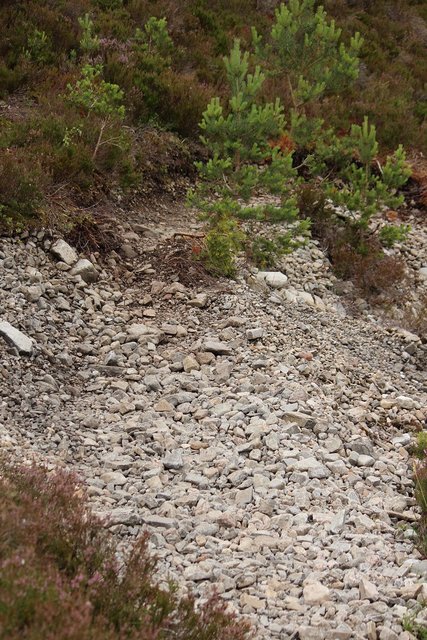 This is where the path goes round the side, it is stony at first and then boggy on the other side The end of the track on the other side, just gone completely!

Made it round with no problems and continued on. In all honesty, the rest of the track to where the turn off is seemed fine to me it was only that section I found to have severe damage. There were nice views up and down the glen, though I must admit I by far preferred the views looking back so may be one reason why I may consider doing this walk backwards next time (there is another reason later on)! 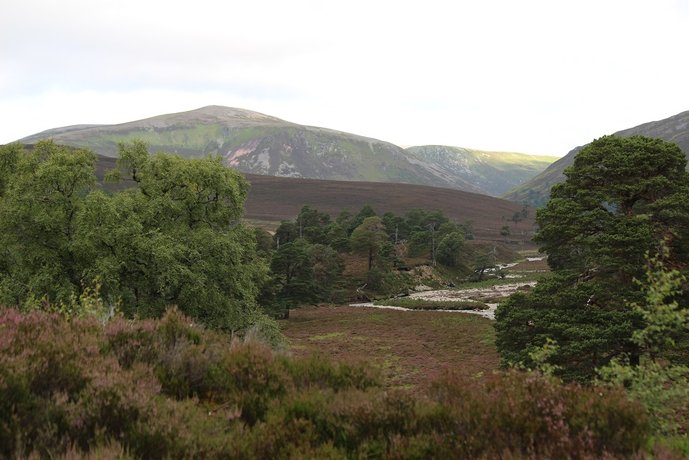 We came across a mysterious arrow pointing to the left along a wide trail...which we ignored because it wasn't our turning our turning was just a bit further along. The trail crossed over the top of a burn with pipes diverting the water underneath and just passed that a rock marked where we were to turn off to head across to the Glen Lui. 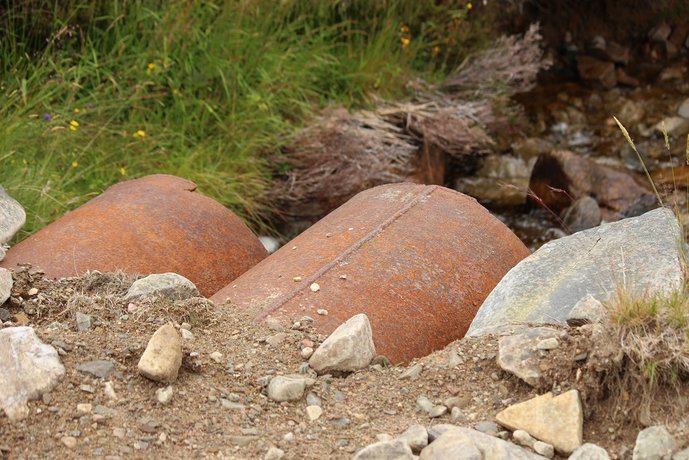 Pipes under the road The upward trail was boggy for the first section but was drier higher up and we soon had the lochan in sight, which meant Millie started running well ahead of me to get to the water as quickly as possible. 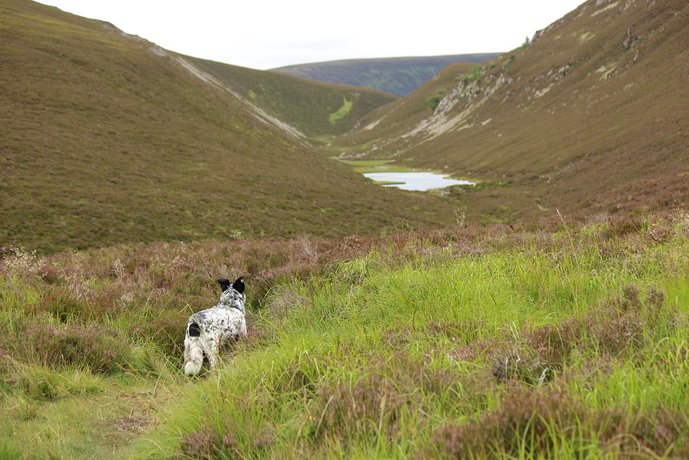 There was a nice pebbly bit of beach as we approached the lochan and I stopped to take a break (if throwing a dog toy in the water countless times counts as taking a break that is...) before continuing on. The path was easy to follow through the cleft and it didn't seem to take long before we were descending down into Glen Lui. I even decided to take a different photo on the way down! 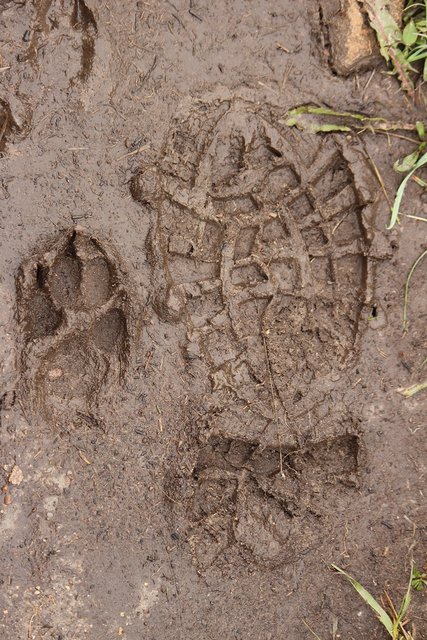 Millie's pawprint and my bootprint

In Glen Lui, I felt the best views were behind me! 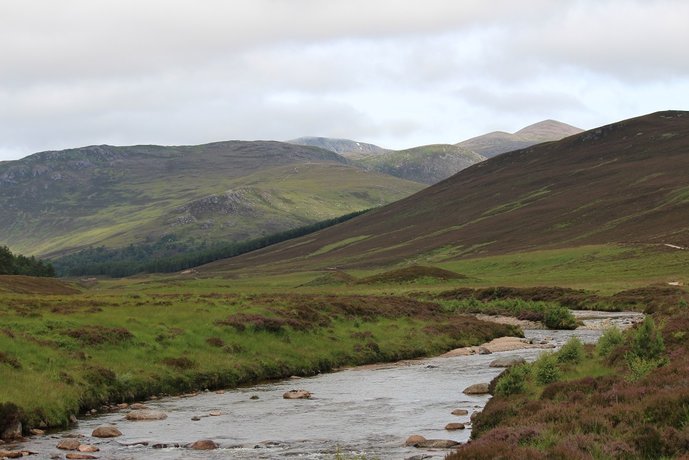 We reached what I guess is described as a black bridge in the WH route, though it is now red just to confuse everyone! 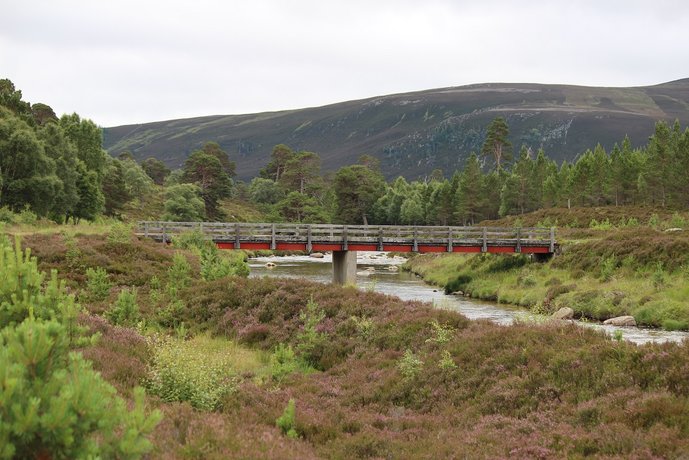 Of course, I stupidly decided to switch to my wide angle lens for the views, and didn't really get anything I was overly impressed with, and didn't bother changing my lens back and of course look what was on the path right ahead of me! 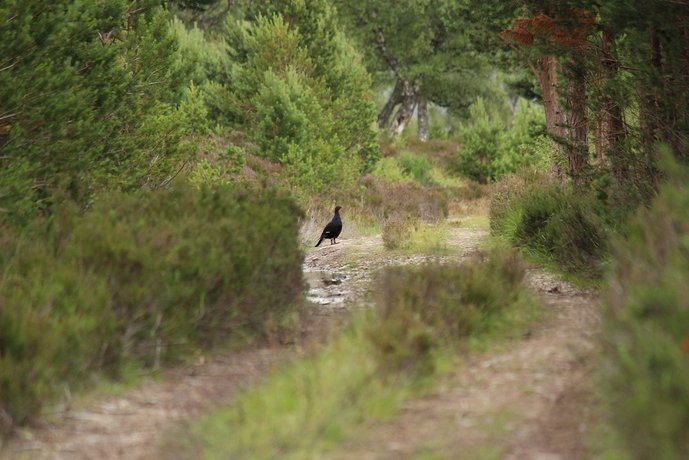 He sat there while I changed my lenses round and let me get a couple of photos before he decided he had enough of standing on the road and flew off! Note to self - views stay in place, wildlife will run/fly off!

We kept following the path sticking to the lower fork where it split and soon had the river in sight ahead of us. This is where my route alters from the WH route...see, I detest walking on the road and I had noticed on the map a trail led almost all the way back to the outward route. I had looked up at the hill and seen tracks heading up it, and it all suggested that it may well be possible to avoid the road this way...so at the crossroads instead of continuing straight down I took the left turning to go across the hillside high above the road. 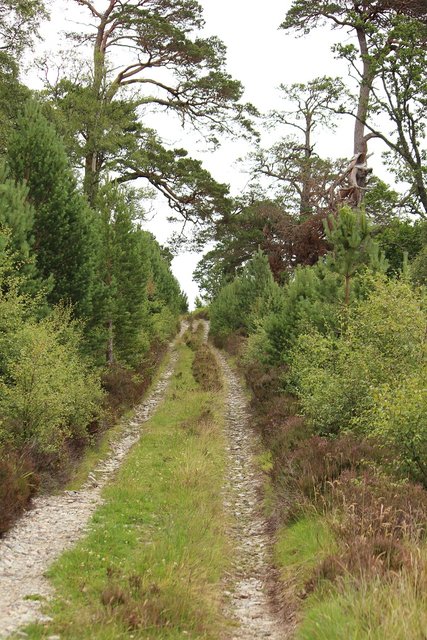 I certainly found the trail pleasant enough to start with. There were good views from up there and a couple of noisy young buzzards for company. We followed the trail along passing another downward path which I could - and considered - taking to go down to the road but I decided to continue to investigate this route. It was around about this point I realised the date - from the hills on the other side of the river I heard shooting start up. Fortunately Millie isn't too bad with the bangs from guns now so after an initial reaction she soon ignored the noise.

Even this way, the best views seemed to be behind us! 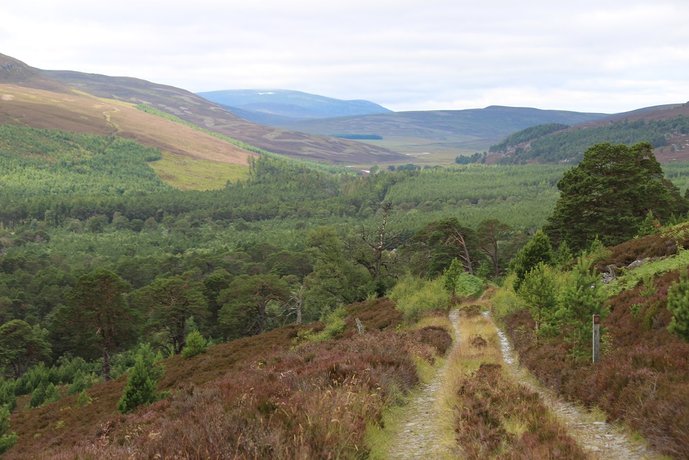 The track became more grassy and ended by a sort-of fence structure with a narrower path around it (a wider track headed uphill), but still easy to follow and led all the way to a big thingy (do you like my technical terms for it?) 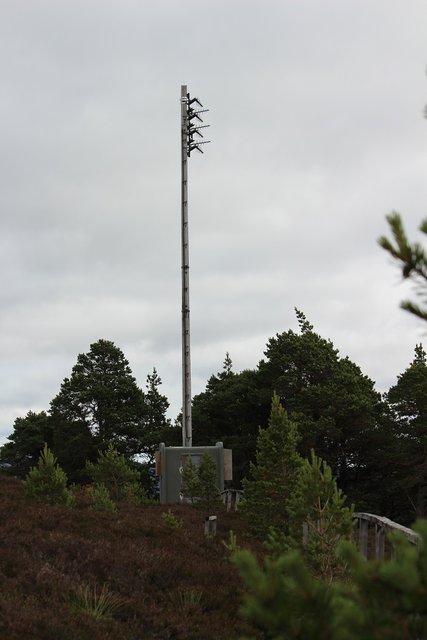 At this point I could see where Quoich Water met the Dee so I knew I wasn't far from where I started so I went to the big thingy and looked around, there was a patch of woodland behind it and I seemed to make out a faint trail (though possibly imagined!) and followed it downhill. Now, this is where it would probably have been much easier to do this in reverse because while it is easy to look up and see a track, it isn't so easy spotting a track coming down! I kept finding various tracks that led to nothing and ended up descending down through the heather sometimes finding a track sometimes not, the track I wanted was actually further to the right of me but I couldn't see that until I was looking back up at it. Still, it wasn't difficult to descend down this way even when not on a track and Millie led the way. She actually seemed to be enjoying this section of off-trail walking a lot!

The main trails were easy to spot and we headed for one of these to follow to the main track and back down the hill to the car. Really fun walk and something a bit different for me as I don't tend to do walks without a clear track to follow! Might have only been a short section of pathless stuff...with the car and clear paths ahead in view...but it is a start, right? Though call me a coward if you like, I do think I will be sticking mostly to good paths! 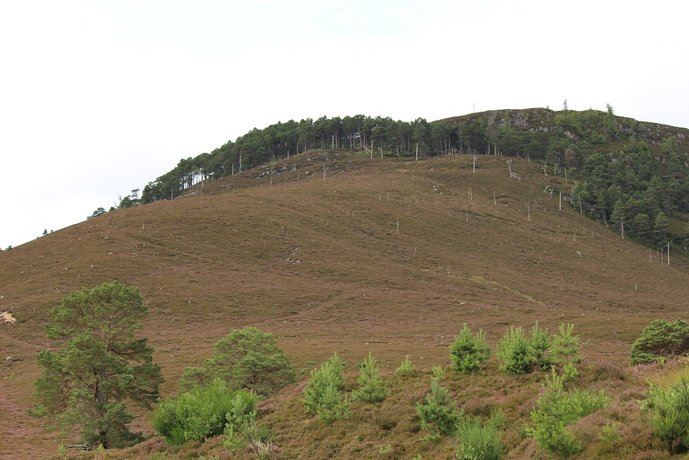