I thought I'd make this one live as it's a slightly more unusual route in the popular Coniston area.

I'd secured a half day off work and with the brilliant forecast thought it would be daft not to head out and as I rarely get to the lakes anymore this looked as good a chance as any.

With warnings of traffic on the A590 I opted to take the main route through Windermere, Ambleside and Coniston. This proved to be a mistake with traffic very heavy and leaving me dreaming of the quietness of the Pennines!

Eventually I arrived in Torver just shy of 3pm with the sun baking down. It's an easy wander on a good track up to Goats Water from there (passing hoards of people heading down the Old Man and destined for Coniston on the way). 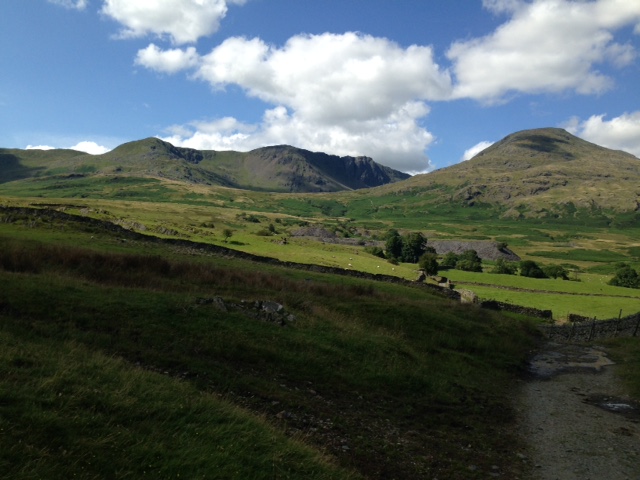 Dow Crag and Coniston Old Man from the Torver route 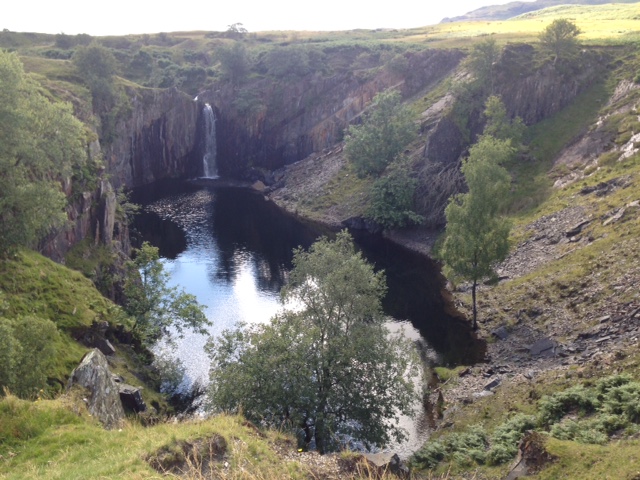 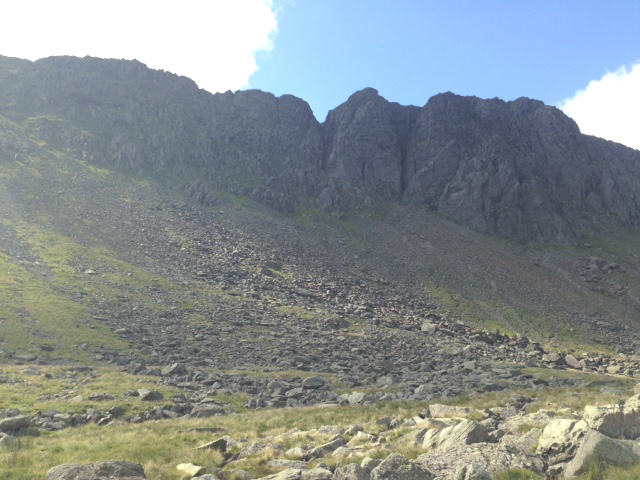 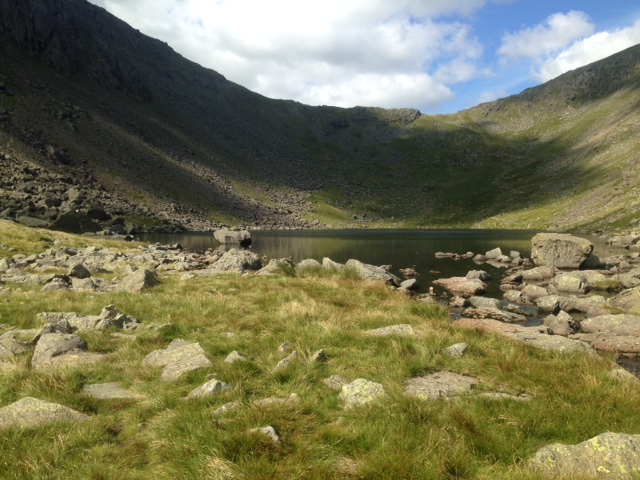 From Goats Water I followed steep scree and boulder paths right to the foot of the main crag of Dow Crag. From here the South Rake made itself obvious - a narrow gulley of rock angling across the main crag and perfectly usable for walkers (although I did see a few geared up climbers using it as descent route).

The rake itself is probably a cross between the two more famous rakes in Lakeland - similar to Jack's Rake with less hands on scrambling, but loose underfoot like Lord's Rake.

Making sure you have good holds is vital as a lot of the rock's can easily come loose but the progress is quick and the scenery is incredible (with various rock climbs to the right throughout). 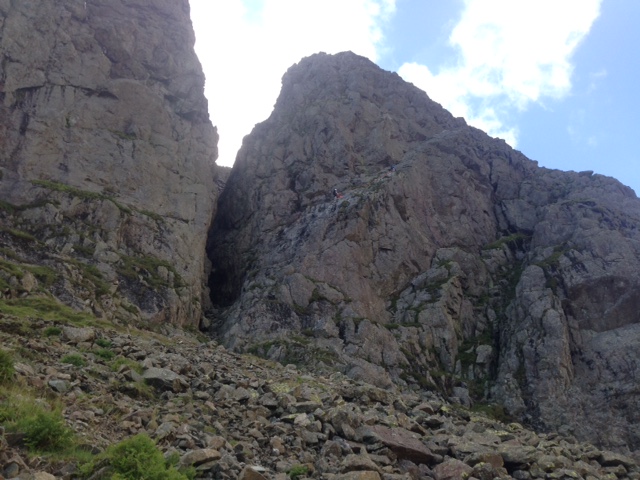 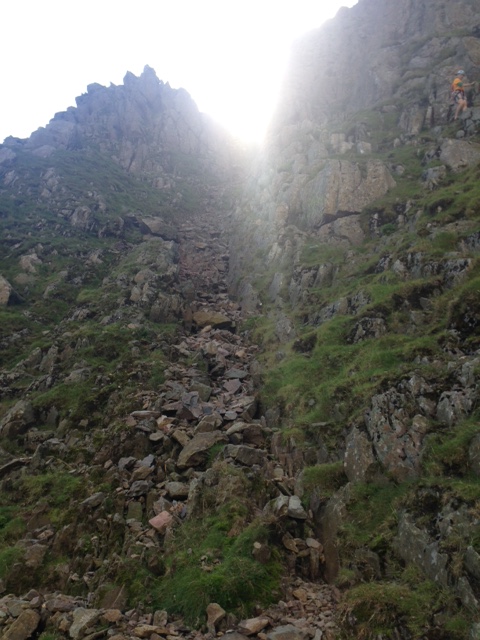 South Rake with dramatic sunlight near the top 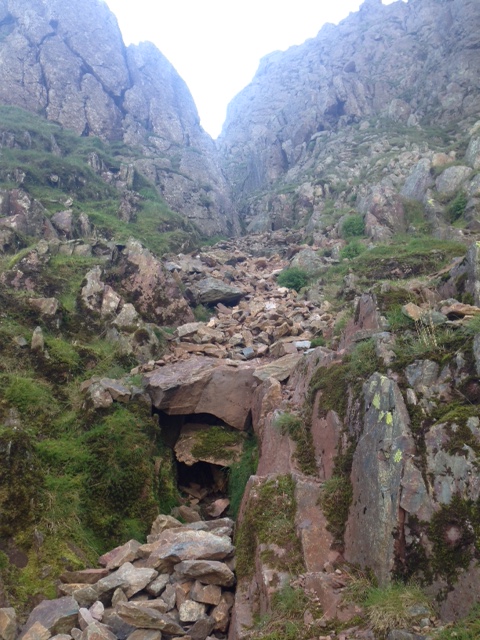 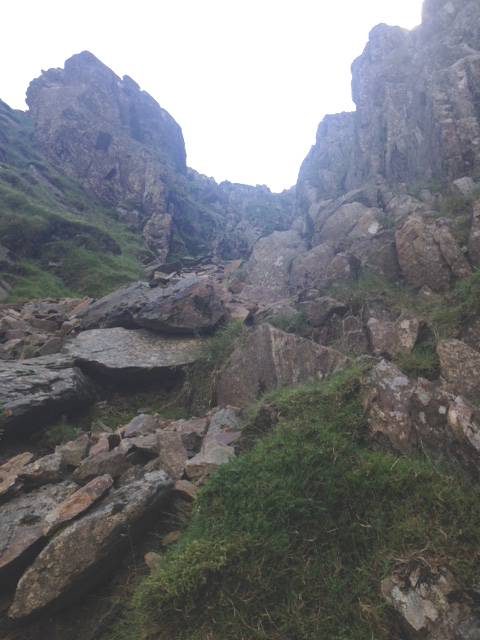 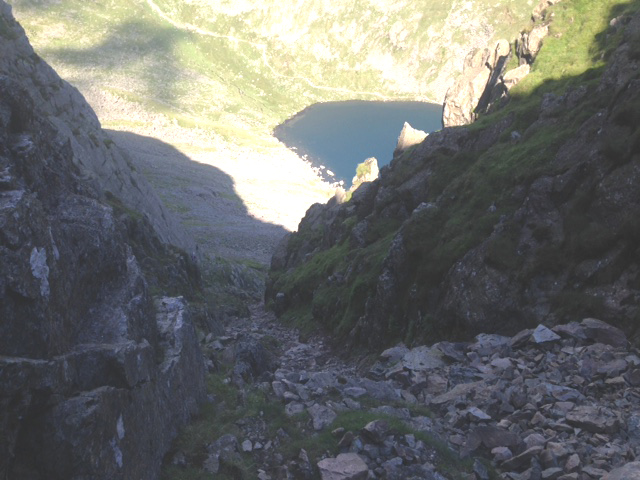 Looking back down the Rake

I eventually came out just to the left of the summit and it's an easy scramble over boulders to the summit.

From here it's a very easy walk over a gentle ridge to the summits of Buck Pike, Brown Pike, across the Walna Scar road and then over to the outlying fells of Walna Scar, White Maiden and White Pike. 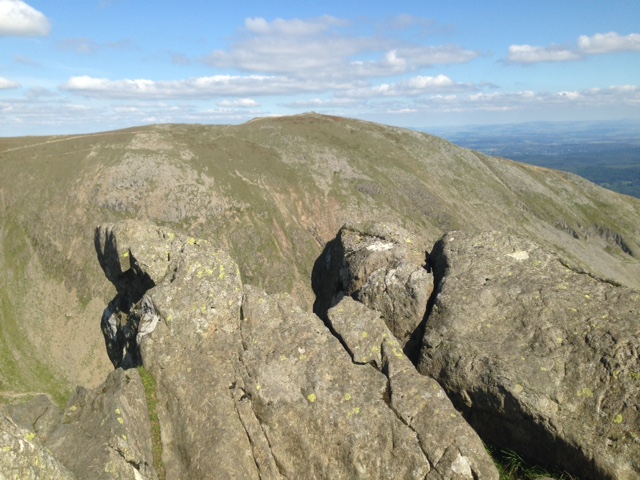 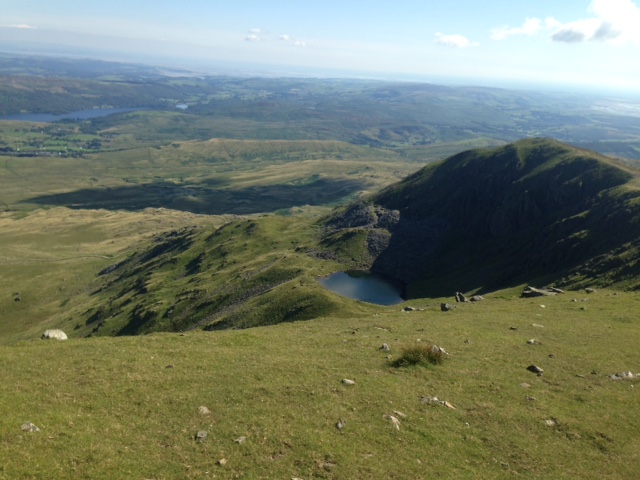 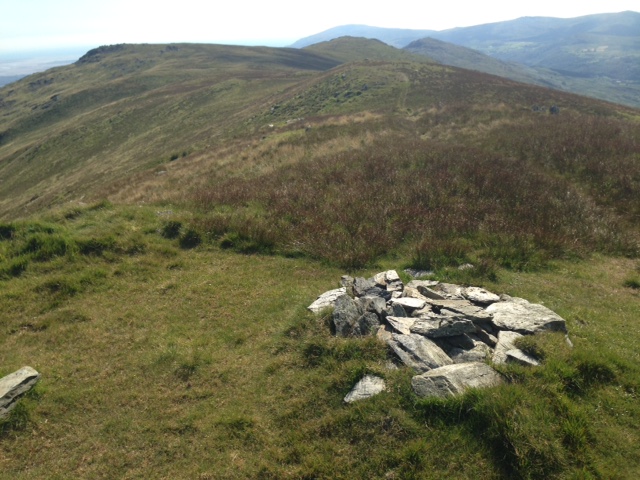 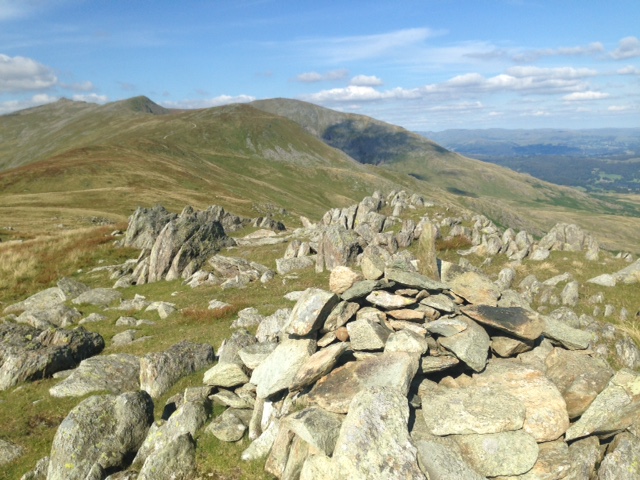 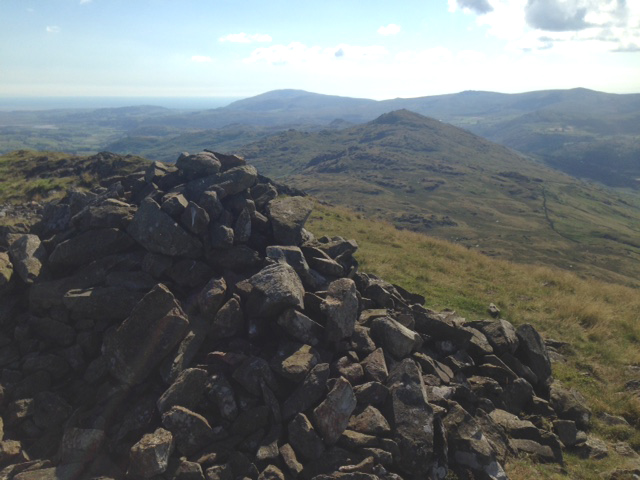 The ridge ends pretty abruptly at White Pike but I was keen to continue to the next outlying fell of Caw.

Caw is the pointy fell that always takes the eye on the drive to Eskdale and it looks superb from the Duddon Valley. I'd always been keen to climb it and it was one of my main two objectives today (along with the South Rake).

Getting there involved a steep descent to the Walna Scar Quarries and then an often boggy, often rocky, undulating walk over Pikes to the grand summit and Trig Point. 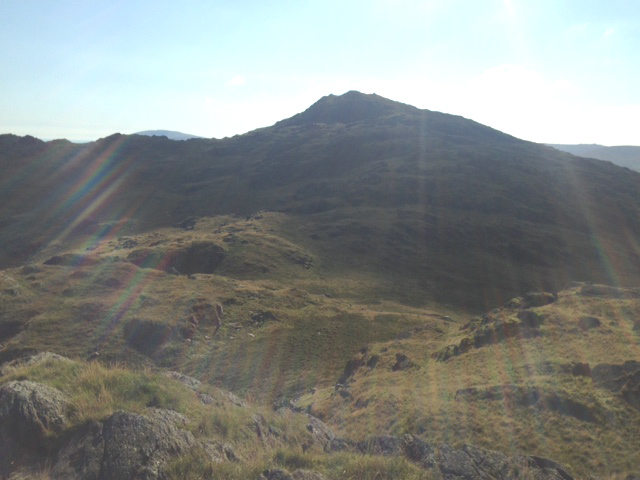 The Duddon Valley and higher fells from Caw Summit

The descent to the good bridleway besides the River Lickle from Caw (over Tail Crag) is not obvious and is in parts rough, boggy and steep.

Once the valley path is reached it's a pleasant walk back to the road at Stephenson Ground. 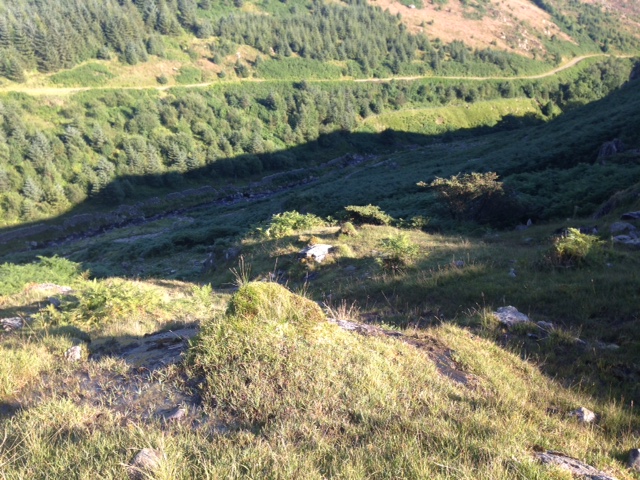 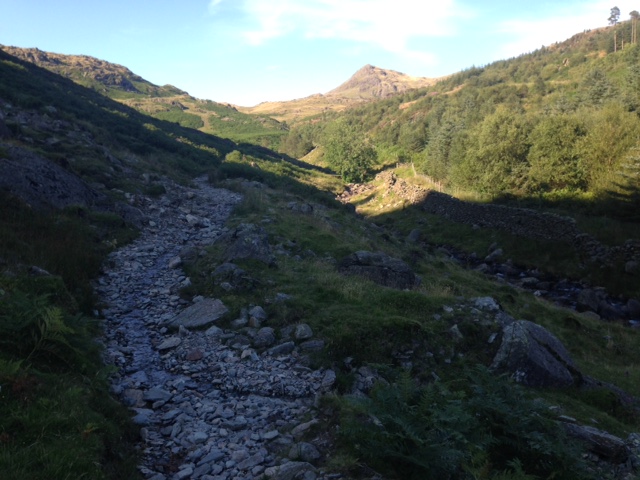 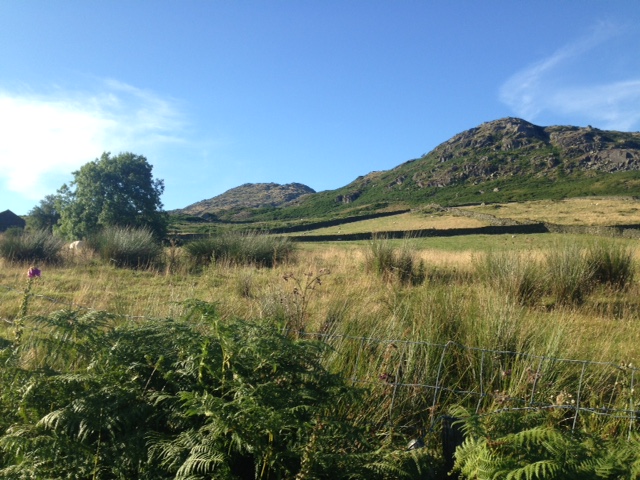 Tail Crag and Caw from the road

Getting back to Torver from here was not straightforward. I had to enter the forest of Broughton Moor and closely follow the map to keep on the right of way.

This involved using some narrow and overgrown forest paths and some better established forest roads as well as a bit more uphill before hitting the road just before the A593 which I followed back into Torver. 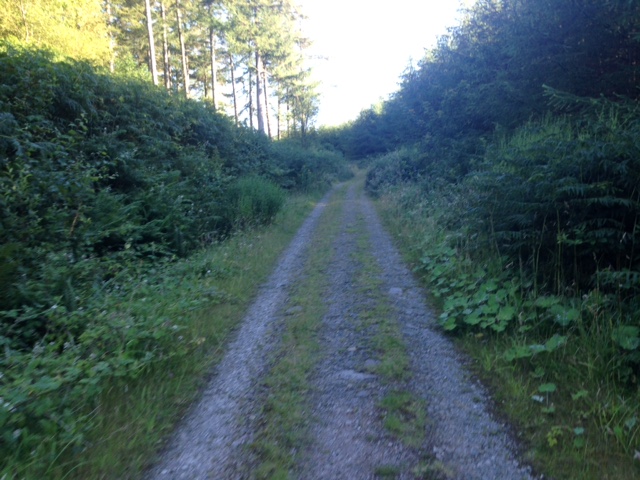 A good route - especially for anybody keen to add the immaculate Caw to the Coniston Fells.

It was a worthwhile reminder to me that the busy parts of the Lakes still have much to offer, especially on the fells themselves (although perhaps I may stick to outside the summer hols for the Ambleside, Langdale, Coniston areas).

Ooo yes, one of the finest crags in England is Dow, and definitely one of my favourites. Another good way up it for the scrambler is Easy Terrace - much more hands-on than SR. Never been up Caw! Looks good, must do it sometime soon. Nice report.

over some of the ground that I hope to cover in the next few months. Thanks for the tips on conditions.

Cracking report on my favourite Wainwright.

Lovely looking hike with some nice little scrambles along the way, what more could a man want