Always wanted to do Ben Loyal, it has such lovely name. I wonder who named it and what it meant to them. Like all mountains I am sure there are many special memories stored away up there!

So we set off with our detailed Pouchers map

, starting from the car park in Ribigil. From here Ben Loyal looks magnificent, I have heard it is a subject of many paintings, and so easy to see why. Instead of heading straight up to Sgor Chaonasaid as the drawing suggests, we took more gentle line up underneath An Caisteal, following an obvious track, it seemed like a easier way up to us. The path leads down a road and through a really nice old farm before bringing you out here with an even better view. I was surprised how lush and green it was up in Sutherland, the beautiful weather was the icing on the cake. Ben Loyal seemed very close and looked rather easy from here. Past the farm, getting closer

Along the path we met a huge patch of bog cotton, I have always loved it but normally only ever seen the odd bit here and there. This cotton was so thick, fluffy and perfect, really the kind of stuff you would want to fill your pillow with! Bog cotton waving in the breeze

As the path continued we past more colourful wild flowers, so nice to see. At one point the grass was just full of orchids. We continued along this track which began to peter out in places and get a bit damp underfoot but it was easy to see where we were heading. Only problem was Ben Loyal didn't really seem to be getting any closer..... We came upon a picturesque river and small patch of trees, it was easy enough to cross with poles and boots. Alistair was in trainers and decided to wade. A family of stonechats lived here we saw them on the way up and down, their calls really do sound like stones being hit together. Great name! The river and the mountain

Finally we had reached lower slopes and began climbing up through the bracken, path still easy to follow. We climbed up the glen along side Ben Loyal and it wasn't long before we found ourselves on more of a moor land. Following the natural line of the glen seemed easier than heading straight up the steep slope below Sgor Chaonasaid, and Im glad we opted for the former. Round the side of Ben Loyal on higher ground Plane crash 1943, Handley-Page Hampden Bomber which had been looking for another missing aircraft. One survivor rescued by a shepherd and a doctor from Ribigill.

The track did seem like it might just lead out the otherside of the glen at one point, but eventually it took a gentle climb up the hill, then a steeper one! A little tired, hot and bothered Finally we reached to top of the slope, only to find ourselves on a wide plateau below the summit plateau. I couldn't quite believe how many hidden depths this hill had to it, having looked so small and easy from the start. From here a lovely bank lead up to the summit of An Casteil which was now in view.......as we would later find out this quaint little bank & rocky outcrop were also deceivingly small looking from where we were.
Totally exhausted it was time for an early stop on the 'lunch rock' as we named it. Seemed from a few banana skins about the place that we were not the first to be beaten, beautiful spot though. Stopping for a much needed lunch break before the final climb Dwarf cornel (not Bunchberry), the white petals are not the flower, they are modified leaves.....apparently! Half way up the last leg, hard going and further than it looked from lunch rock Finally up on top, a lush green meadow as far as the eye can see

It was great being up on the plateau and finally on flatter ground. I don't remember ever seeing the top of a mountain so green before, it was quite amazing and as a result felt more like a meadow than a mountain top. We decided to head in the direction of An Caisteal first. We walked around underneath the rocky outcrop and took a peek round the corner, at this point the mist had started coming down making it seem quite atmospheric. Round the corner the meadow quickly vanished with an unexpected huge curved ridge and impressive corrie in its place. The path here was a little too exposed for my liking so I hurried back round the corner to the safety of the meadow again.
The path going up to the summit of An Caisteal despite having seemed quite steep, was fine even for me. I couldn't believe how the little rock outcrop we had seen from below was now more like a huge rock fortress. This it seemed was just another trick of Ben Loyal. Stepping carefully off the summit Coming off the summit, view across the top

We then headed north along the top to explore the other end and the summit of Sgor Chaonasid. The ground was so soft under foot, and once the mist cleared we were incredibly lucky with beautiful views out across to the northern coast line. Interesting pattern of grass and moss Looking out to Tongue estuary View across to the north We descended back down the same way we had come up with no difficulties except very sore feet!!

Defiantly a tough Corbett, but a really wonderful day in a beautiful part of Scotland. We felt so lucky to have enjoyed it with the sun shining too. I hope I will be back up there again one day, until then I will have my memories here if I feel the need to nip back from time to time.

Lovely pics and walk, one which I have passed so many times with work, you cannot help be captivated by this mountain, thank you for posting

Thank you glad you liked them, it is a great mountain! I wish my work would take me up there!

I did manage to get up Ben Hope between work jobs one year, and had a superb afternoon but the opportunity hasn't been there since, but I'll keep the rucksack in the car just in case

More than just a summit to be reached. Loyal is a very fine hill to visit and rewarding with the plant life to see.
Is the name you give to what I have known, and probably most of us, as dwarf cornel, bunchberry, a US name for the plant? .....but a very good name for it when you see the way that the berries are set,

haha, yes I think you are right - dwarf cornell it is. I just googled it as didn't know what it was and that was what came up. Now you mention it though, it does sound very American

Great mountain. It's not just a green hill to climb, it's a playground for adults

So many tops, rocks and boulders to visit and scramble over... One of the rocks has a shape of an old witch

I think I recognize your "lunch rock", though my picture was taken from a different angle... Must be the very same boulder 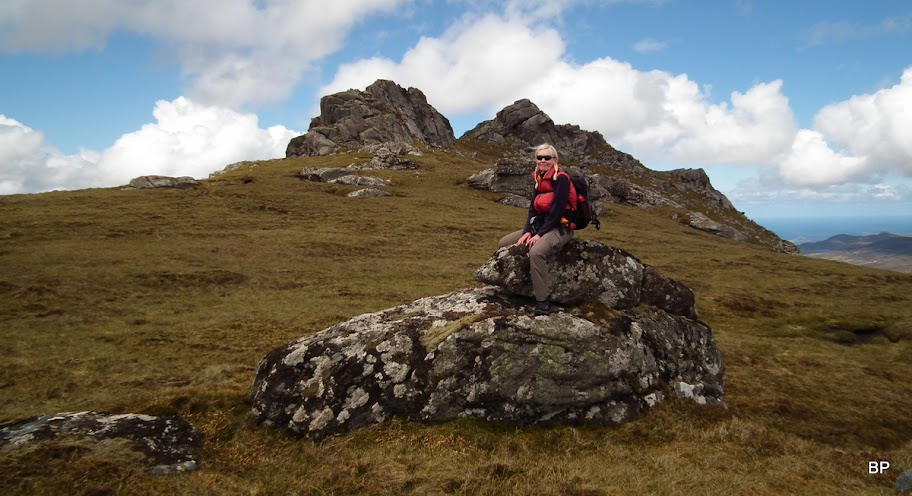 You write very well and interesting to have the flowers and plants noted and named along the way. Some great pictures too, especially looking to sea and with the bog cotton and sea pink.
Special hill for us as it probably partly led to us getting married. Well, in a roundabout way!

BlackPanther wrote:Great mountain. It's not just a green hill to climb, it's a playground for adults

So many tops, rocks and boulders to visit and scramble over... One of the rocks has a shape of an old witch

I think I recognize your "lunch rock", though my picture was taken from a different angle... Must be the very same boulder

I like the idea of it being a playground for adults, so true, it surprises you round every corner! I like your picture of lunch rock too, it was perfectly placed there by someone/something

litljortindan wrote:You write very well and interesting to have the flowers and plants noted and named along the way. Some great pictures too, especially looking to sea and with the bog cotton and sea pink.
Special hill for us as it probably partly led to us getting married. Well, in a roundabout way!

Thank you! When I'm feeling energetic I love taking pictures of all the small things on the hills too

Making an effort to get to know the plants and flowers, so each time I see a different one I am trying to learn the name.
Lovely that you have some special memories from Ben Loyal, intriguing