Route description: Sgor Mor circular, from the Linn of Dee

In Coylumbridge for two weeks holiday. Elder son wanted to walk the Lairig Ghru and I wanted to cover Sgor Mor and Creag Mhor so a plan was hatched. I would drive round to Linn of Dee then walk to Glenmore via Glen Derry and the two corbetts after which I’d either get the bus down or a lift. The next day the two of us would walk the Lairig Ghru from Coylumbridge to Linn of Dee to get back to the car. Only thing we needed was some good weather..........


CMB 29jul2015 GlenDerry activelog truncated500.gpx Open full screen  NB: Walkhighlands is not responsible for the accuracy of gpx files in users posts
Set off early from the Linn of Dee car park towards White Bridge. Rather dull and cloudy - wasn’t long before the rain started and had to stop to put on the waterproofs.

White Bridge in the gloom

Turned and headed NW then more directly north after reaching a stream.

The rain became somewhat heavier up to the summit.

Little chance of it clearing so headed east towards Sgor Dubh. Could then see occasionally down towards Derry Lodge.

Stayed west of the crags and right of the trees - had a rather steep descent down to Luibeg.

Looked on the map as though there was a bridge over Lui Water but turned out not to be the case. Headed upstream a bit to find a shallower area to cross as I couldn’t be bothered taking off my boots - turned out OK. Then walked round to cross over the new footbridge.

It was then just a case of following the track up Glen Derry. Great at the start but it did start to break up and become boulder and boggy further north.

It was raining much of the time so didn’t see much on the way past. Got to the River Avon and could see the refuge hut. 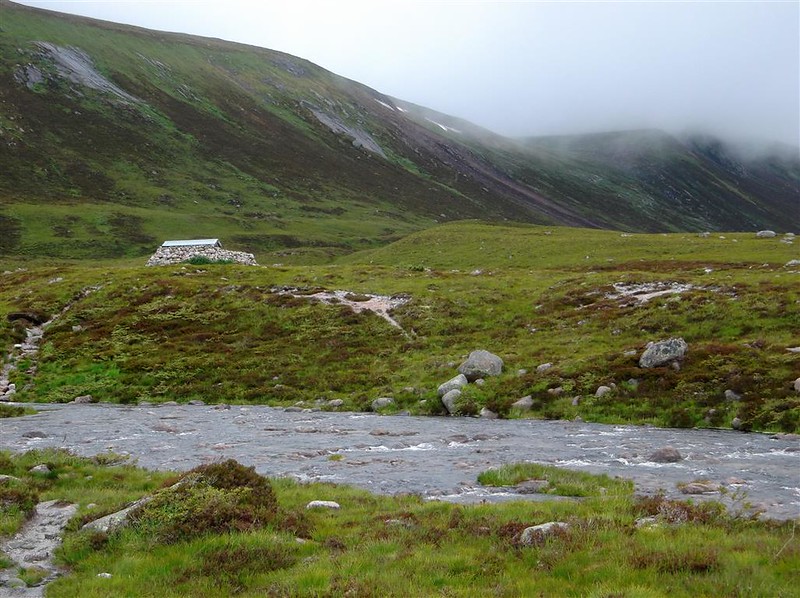 The water was too high to cross by the “stepping stones” so it was off with the boots and socks and on with the flip flops.

Crossed the water and headed to the hut to change back into my boots. There was another walker in the hut having a break from the weather and was just about to head off - he was on a multi day camping trip round the Cairngorms.

Stopped inside to change into my boots and have some lunch - it’s a great improvement on the previous shelter.

After lunch, headed up by the Allt Dearg before branching off NE towards Creag Mhor.

Relatively easy walk up towards the summit.

Then set off NW down to the track which leads past Bynack More towards Ryvoan and Glenmore.

Followed the track until it reached Ryvoan Pass then turned left - past the green loch and through Glenmore. Got to the road just a little too late for the Cairngorm - Aviemore bus at 1612hrs. No phone signal so walked to the call box and phoned my wife who drove up to pick me up. Back down to Coylumbridge for dinner.


CMB 30jul2015 LairigGhru activelog truncated 500.gpx Open full screen  NB: Walkhighlands is not responsible for the accuracy of gpx files in users posts
Not as early a start as the previous day. Weather forecast was reasonable but turned out somewhat better in Aviemore than up on the Lairig Ghru. Walked round to the Coylumbridge caravan park then set off up the track.

Nice walk through the trees then on to the Cairngorm Club footbridge. Have a photo on the PC taken on 3 Aug 2012 of it being painted.

Along the track which runs close to the Allt Druidh and up to Piccadilly when we turned south and the path narrows.

Stopped to put on waterproofs as the weather was turning bad. A group of five including three dressed in military style clothes passed us - we met up again with them when they stopped briefly for food.

The path becomes more rocky and boggy further up and then partially disappears in the various boulder fields. Not so nice in the wet weather. Steep sides to the left and right as well.

Got past the boulders and cold see the Pools of Dee in the distance. The Devil’s Point was also making an appearance.

Views starting to become a bit clearer as the rain abated. 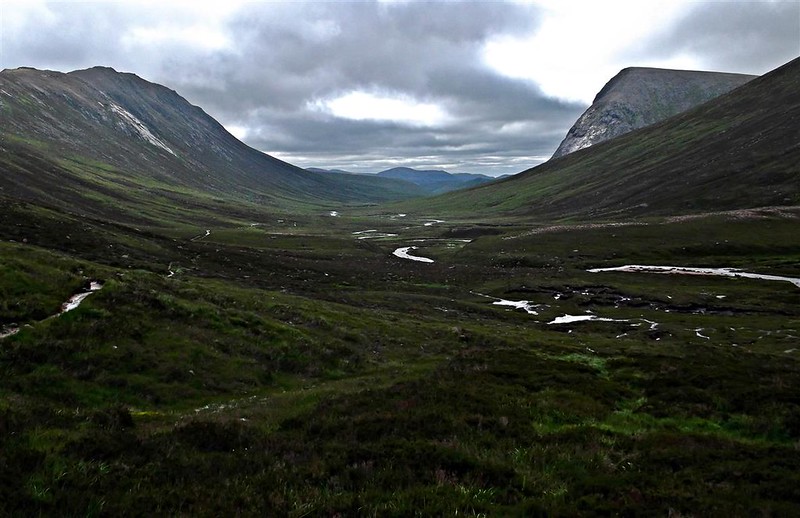 Then we followed the path round to the Luibeg Burn. Too much water to cross so tracked back to cross by the bridge. Then on to Derry Lodge via the new bridge.

Nice walk back to the car form there - weather had improved quite a lot and we removed the waterproofs.

Got changed and drove back to Aviemore. Stopped at Smiffy’s to pick up suppers for all of us (big queue as usual) then back to Coylumbridge. Good day despite the rain.

Magical stuff and quite incredible walking all that distance in only two days. Something really special about the Cairngorms, as your photos show.

It's nice that you managed to walk the Ghru with your son, maybe he's now got the bug. I can see you doing a second round of the Munros with him this time.

Enjoyed your report, thanks for posting

That is a great tour of those walks well captured. Been on bits of both so interesting to see what's round the next corner.

The last mile to the Fords of Avon is a bit slow going - rough and wet.

I was hoping to do Linn of Dee to Tomintoul this summer but still haven't got round to it.

Great walkabout that one

. Would love to do that walk.

RiverSong wrote:I can see you doing a second round of the Munros with him this time.

) - maybe they'll get back into it in years to come - cheers