Wyvis was canned last summer when I was up this way in favour of Little Wyvis, on account of the fact that I was still feeling the effects of the previous day and the 15+ hour epic on the Beinn Dearg hills. This time round, it was pencilled in for the Sunday option on the way back down the road after the Aultguish meet. I still had my doubts, given that I would hopefully have done 5 consecutive big days by the time Sunday rolled round, and when you factor in the ever present threat from the legendary WH meet "bug"!

In any case, the forecast wasn't looking too hot for the Sunday, but with the Saturday looking not too shonky, and GillC, John (Tomsie) and Alan (Scotjamie) all planning Wyvis, I plumped for this too. The other option would have been the three central Fannaichs which, after my outing yesterday on the eastern four, would have completed the range. Hindsight is a marvellous thing and fortunately I did not pursue that option as by the time the four of us got back to the bunkhouse from Wyvis, the group that had set off for the central/western Fannaichs had already bailed out and returned ahead of us on account of severe wind. See - I told you that bug could be a real issue at these meets!

When I came across from the rooms to the kitchen area that morning, I had been a bit surprised and alarmed to see a police car parked by the door and two police officers in the kitchen. There was also, suffice to say, an assortment of about a dozen or so motley looking WH members sitting having breakfast amongst the debris of the previous evening. I am amazed our number plates were not noted and none of us were pulled over and breathalysed later that day or on our respective journeys home on Sunday! It turns out that they were simply attending a road traffic accident involving a Tesco lorry which had come off the road, and they had popped in for a brew!

Anyway, to the walk itself. The car park was rammed (as we suspected it would be) given that a chap was finishing a 100 day Munro round that day on Wyvis. Gill and Polly had met him and his wee dog on Thursday on Klibreck so she knew there was going to be a big group accompanying him today.

By all accounts this hill is never the quietest, being like the Ben Lomond of the North, and today was no exception, even without the added numbers involved in the 100 day compleation. The midge was also out in force as we got ready and headed off through the trees, but once clear of the plantation and onto the well trodden path up An Cabar, the wind got up and the wee buggers were dispersed. As I knew would be the case, it wasn't the most glamorous or interesting of hills, especially after some of the routes of the previous four days, but it was just what the doctor ordered for today and, apart from 20 minutes or so around the summit when it clagged in, the day was clear with good views. Clag down on the long broad ridge The summit party was just coming to a close as we reached the trig point and shelter cairn, with a number of empty champagne bottles being stowed away in backpacks. Then they all cleared off - something we said? I would tend to point the finger of suspicion at Mr Ross! Tail end of the champagne reception

We enjoyed 10 minutes or so at the summit taking photos, just the four of us, before a couple turned up and we set off, the clag now cleared, to retrace our steps back to the car. And then there were four! Alan, Gill and John with the Cromarty and Moray Firths and the Black Isle in the background Alan and Gill doing some photography North west towards Lochs Fannich and Glascarnoch, with Fionn Bheinn, the main Fannaichs group and An Teallach all prominent Across Coire na Feola to the Black Isle

Then it only remained to return to Aultguish to drink beer, have a shower, eat in the pub and prepare for Alan's eagerly awaited quiz! Clag lifted on the ridge back to An Cabar 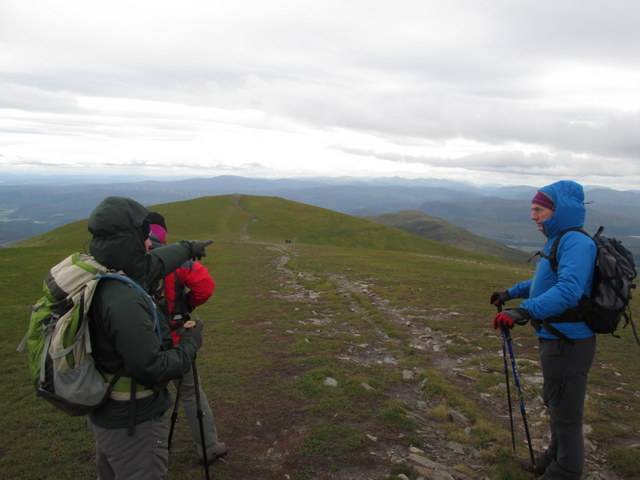 Snowy! I can see the pub from 'ere! Posing with John and Gill (as yet oblivious to the fate awaiting them that evening back at the bunkhouse!) Glas Leathad Mor from An Cabar I see a pint before me! I would tend to point the finger of suspicion at Mr Ross!


I would ALWAYS point the finger of suspicion at Mr Ross!!!!

Glad you had a great time on Wyvis Graeme especially in such wonderful company and Alan.

Smashing report Graeme and a fab day indeed, Nice pace and good company,,and yes,,we were still in blissful ignorance at that point.

Good day and nice to get out with yourself and Alan

Hope we ( GillC ) can make the next one just as enjoyable for everyone.

Get the two least interesting ones written up first then

. Good to see you at the meet, and doesn't seem like a bad day out either. I should've gone for a short walk at least.

I'm rather glad the police were lenient on Sunday too when I passed them directing traffic at Belladrum. If they'd stopped me I doubt they would've needed a breathalyser; just having me open the window of the car would've released sufficient fumes to make them suspicious

Graeme D wrote:As I knew would be the case, it wasn't the most glamorous or interesting of hills, especially after some of the routes of the previous four days, but it was just what the doctor ordered for today and, apart from 20 minutes or so around the summit when it clagged in, the day was clear with good views.

Difficult hill for 'Southerners' to get around to, this. I never managed to get up it before I moved up here, as it always seemed a bit uninspiring compared to wherever I was going/coming back from. Of course now it's one of my most accessible high hills (closest Munro, certainly), so I've been up it a number of times. It has some fore interesting aspects on the eastern side, but not without a long walk and some rough ground. Handy weather forecaster too, as I can see it from the house, work and most places in between.

pollyh33 wrote:I would tend to point the finger of suspicion at Mr Ross!


I would AL.WAYS point the finger of suspicion at Mr Ross!!!!

Glad you had a great time on Wyvis Graeme especially in such wonderful company and Alan.

Oi!! Just found this WR, and the defamatory remarks which are not only harsh, but (only possibly) fair.

If I remember correctly, Mr D, this photo shows you about to put on black lycra arm stockings!!