Debated whether to start from the car park north of Achlean on the east of the River Feshie or the parking area on the west of the river on the edge of Inshriach Forest. The former is shorter but a little trickier at the start - opted for the latter as I’d be starting around dawn.


CMB 7aug2015 GlenFeshie4 activelog.gpx Open full screen  NB: Walkhighlands is not responsible for the accuracy of gpx files in users posts
The road is tarmac until just after the bridge at Balnascriten when it’s rough for a short way before returning to tarmac. Signage indicating it’s a private road not long after this. Easy cycle down the glen past the ruined bridge at Carnachuin (pile of building materials beside it). Private road to Glenfeshie Lodge so turned off left where the tarmac stops and becomes a much rougher track.

Nice views back up the glen 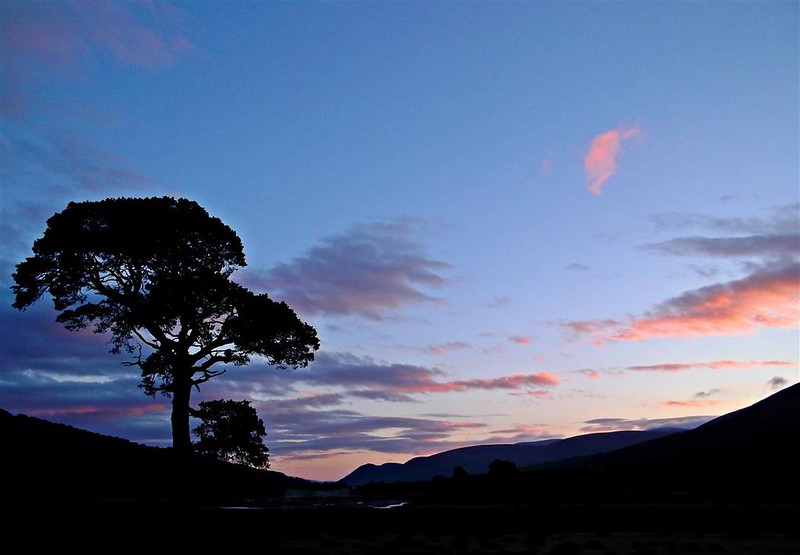 The track splits further down so took the right fork and cycled past some horses in the field. Then starts to climb up through Slochd Mor and past Lochan an t-Sluic. Found the track surface quite loose which made cycling the uphill sections even harder than usual - had to stop and walk a few times. Also hadn’t done much cycling recently so was a bit out of practice.

After the ascent past the lochan the track levels out and I came to the split in the track - right to Carn Mor Dearg and left to Leathad an Taobhain. Turned left.

Steep to start with going south then levels off after turning east. Then more uphill sections - again a bit of stopping and pushing the bike.

Cycled over to the wee cairn on Meall an Uilt Chreagaich

Then cycled part of the way down towards the Allt an Creagach but decided to stop as the track was rapidly deteriorating. Hid the bike a bit off the track and changed from cycling shoes into walking boots. Set off towards the Allt.

Ruin beside the Allt

East towards the upper reaches of the Feshie

Short break before heading off SE towards Beinn Bhreac. I had read that this would be a boggy walk through many peat hags and it certainly lived up to it. Ended up veering quite far off the straight line trying to find a way round the peat hags en route.......and thinking all the time that I had to return the same way.....

Beinn Bhreac did look rather a long way off but I just plodded on. Spotted a small, brownish animal running away in the distance - thought it was a fox but was moving more like a cat - it disappeared quickly though.

Weather was rather dull and grey for much of the way with a little rain now and again so didn’t bother with more photos.

Got to the summit

Stopped for a break and some food but it didn’t want to clear up much. Started back to retrace my steps.

Looked a long way back

Tried different routes on the way back to see if I could get round the various peat hags any better than before. Didn’t seem to make a lot of difference though.

The it started to clear up as forecast

Back at the bike I changed from boots into cycling shoes - a little uphill at first to the top of Meall an Uilt Chreagaich then mostly downhill. Had to be careful on the steeper sections as the track surface was very loose.

Almost back at the track split

Steep climb uphill - again had to get off and push quite a bit. Possibly six in half a dozen as to whether it would be better leaving the bike at the foot of the hill.

I decided to leave Carn Dearg Mor to the last so cycled past the start of its track and downhill towards the trees. Stopped when the good track ended marked on the 1:25,000 as Cnapan na Cuilce. Locked the bike to a tree and changed into walking boots. Then set off NW down a rather boggy 4x4 track before starting up towards Meall an Dubh-chada.

On towards Meallach Mhor - more peat hags to be negotiated

Arrived at the summit

Another break - weather improving all the time. Then set off back towards the bike. Kept the boots on which made cycling a bit tricky on SPD pedals - had to walk a bit.

Got to the start of the Carn Dearg Mor track. Left the bike in the heather to the side of the main track and set off up the hillside.

Didn’t take long to get to the summit

Short break before heading back down towards the bike.

Changed back into cycling shoes for the cycle back to the car.

Horses in the field close to the Feshie

Back at the car, got changed and headed back to Coylumbridge. Had been a long day with weather not quite as good as forecast but can’t complain. Bit of a hassle changing between cycling shoes and walking boots but probably worth it. Could’ve done without all the peat hags though......

I see you've been taking it easy on your hols

I read the other report yesterday, didn't have time to respond. Nice to see you dragging the offspring along.

That looks a nice cycle and walk. Always find cycling out a great buzz. On the topic of cycling...I did the Strathaven 50 this morning, nearly killed me

You not fancy one of these events, I know you like a cycle?

An interesting way into the great emptiness to reach Beinn Bhreac.

..my own way to get to Bhreac was a double topping out on Beinn Dearg.
Have been by bike roughly in your area a couple of times using bikes. On an old touring bike out from Kingussie in 1980, left it on the flats above Feshie Lodge, to get to Carn an Fhidleir and An Sgarsach with a return over upper Geldie and down the Feshie to regain the bike. Later in the days of early off road bikes I had the use of a M Fox bike to reach your ruined building then an uphill push to Leathad an Taobhain. On that occasion I just kept going on the Minigaig trail down to Bruar Lodge. Tilt, Geldie and return via the Feshie. The ruined building....hasn't changed much in over twenty years.

Looked like a tough walk
We loved our bike hike in this area a few weeks ago, can't really remember the hills (mostly uninspiring) but love the remoteness of the area and Glen Feshie is stunning

Some good photos there a' bhalaich

That's a serious day's walking and cycling in a remote area. But not featureless - moraines, hare, cairns, lochans.

I recall a trip report in a book of someone doing a high level ski from Fort William to Glen Avon and this area, specifically Gaick, being the toughest.

Having seen your route to BB I'm glad I did it on foot from Calvine - a long long way but easier underfoot conditions.

Nice to see you producing some epics again, I read some of your back catalogue and can't believe some of the distances

Only 65km? You are slacking.