Cairngorm Via Fiacaill ridge and beyond.

Cairngorm Via Fiacaill ridge and beyond.

our route.gpx Open full screen  NB: Walkhighlands is not responsible for the accuracy of gpx files in users posts
We had planned a slightly different route if the conditions were in our favour. We decided on a later start on Saturday to try and avoid the forecasted high winds.
We did not fancy the Fiacaill ridge if it was too blustery... alas my timing once again was not the best. The wind at times was brutal, at times I was moving crab like along the top of the ridge adamant that I would crest the ridge all the way, I did my best but was beat on several parts. The bypass path was a better option for a few of the trickier parts. Soon all the difficulties were behind us and the summit of Cairngorm was within sight
Coire Raibert would be our route that would lead to Loch Avon and the bonnie views of Stacan Dubha and the beautiful looking shelter stone.
We climbed Beinn Meadheoin from Loch Etchachan and then on to Derry Cairngorm. Unfortunately we added 1km or so onto our route to Derry Cairngorm as we took the path for longer than we had anticipated. From DC summit we headed back to the saddle before dropping down to the Hutchison memorial Hut, following the burn as we went. The hut was very busy so we opted for the tent that night. It rained solid from 4am until 9pm, again we never got going until 11pm.
Beinn a Chraorainn would be next. We climbed this Munro from the Lairig an Laoigh then dropped off the North side and down to the fords of Avon Refuge, unfortunately we failed to cross the swollen burn at the stepping stones and gave in after several tries. We now headed for Loch Avon and the Saddle, this would be our access on to Cairngorm for our 2nd ascent of our trip, finally we headed down the tourist route to the main parking area and the comfort of the van. 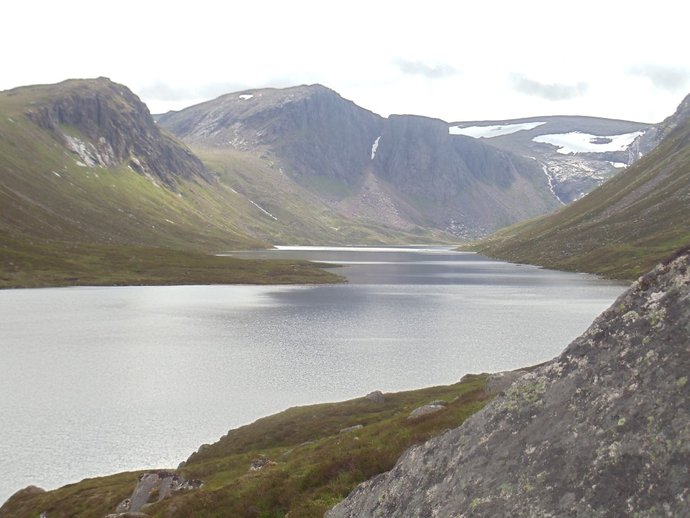 Re: Cairngorm Via Fiacaill ridge and beyond.

Nice to see the crew out and about, and getting wet! Is that a new friend for Wilson? Not done this ridge, but will one day