The Big Buachaille and the Wee Corbie Over the Road

The Big Buachaille and the Wee Corbie Over the Road


Having done Buachaille Etive Beag last year in clag I was determined to wait for a good day to do BEM and today was definitely that day. View from the roadside I hope the weather holds - this could be a brilliant day

All the tops seemed to be clear of cloud, the sun was out and it was fairly warm with only a gentle breeze blowing. I walked down and over the bridge then round the side of Lagangarbh hut before heading straight for the hill and taking the right turn at a fork in the path.

The gradient is increasing on a good path heading in to the coire. As I look up it's hard to see where the path will actually top out on the ridge but for now it's just a case of plodding on, ever more steeply.

There was one guy arrived in the lay by and I can see him down below me, apart from that all I can see now is the odd tiny dot moving along the road, complete silence, wonderful.

On the upper slopes I arrived at a couple of points where I needed to just be a bit more careful with my footing before arriving at the final scree slope to the ridge. It wasn't difficult but at the same time it was a good feeling to be at the top and suddenly the views to the south opened up in front of me. 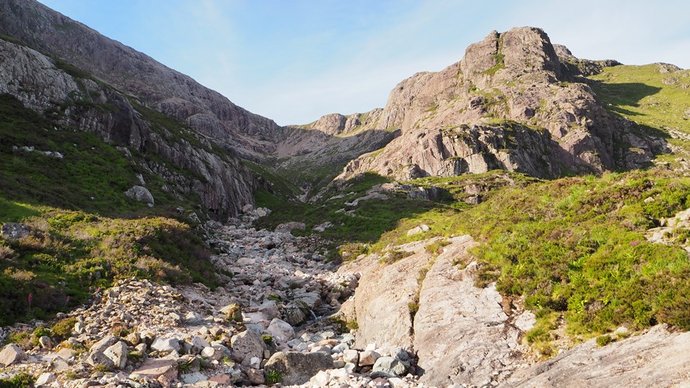 Views opening up to the north Up and up and up 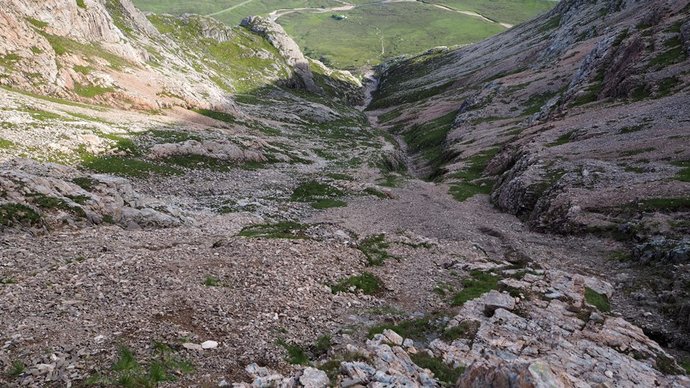 The view back down Turning left there is now an easy climb up to the top of Stob Dearg and along to the far end for the best views. As someone who grew up using slide film and due to the expense, only taking the shot when it was right, it's very unusual for that control to leave me even now in the digital days but today I'm just pointing and shooting at everything - just incredible. A good day to be on the ben After 15 minutes at the top I drag myself away and head back down the wide ridge. A quick hello to the guy behind me and it's on to Stob na Doire along the flattish ridge before the straight forward climb to the top. 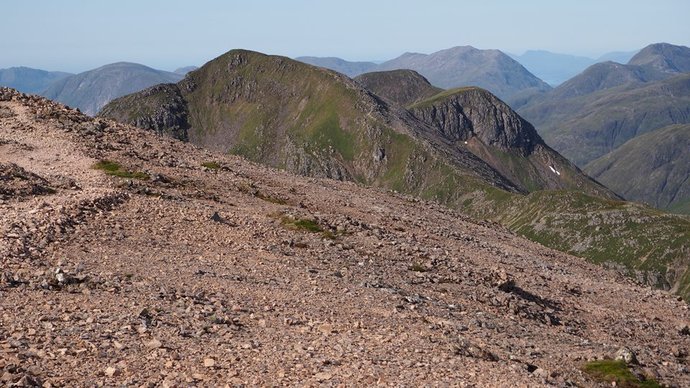 Todays walk in front of me Looking back to Stob Dearg

In perfect visibility I can see why WH give a warning about the route off this top in poor conditions, not a factor today. Navigation apart (in poor conditions) the drop off Stob na Doire is straight forward and I can now see my exit path that will take me down and off the ridge. 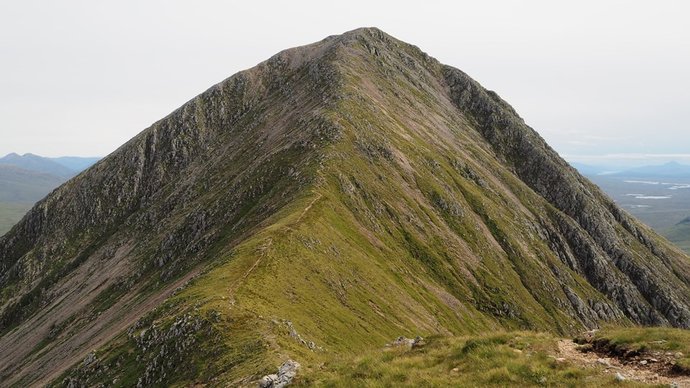 Looking back to Stob na Doire Stob na Doire with Stob Dearg in the background

It only takes a few minutes to top Stob Coire Altruim, as I look along the last part of the ridge to Stob na Brioge I find myself looking for the hidden drop and reascent, but there isn't one

. So it's a very straight forward walk along to the 2nd Munro of the day and the fantastic views looking down Loch Etive. 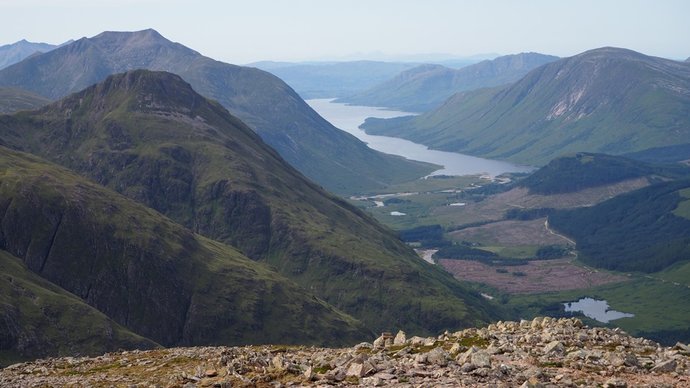 The views all the way along the ridge are just fantastic, every top is clear of cloud and it's just amazing to see (also a bit scary as I realise I've hardly climbed any of them

Finally, I dragged myself away from Stob na Brioge and headed back to the foot of Stob na Diore to pick up the path down off the ridge. Start of the path down

The path is good and the minor scrambly bits are fine as the rocks are all bone dry. Looking down I can see that the low level path heading for Loch Etive is fairly busy and when I get down to it I'm met by a mother and her teenage daughter who want to know if it is OK to head up to the ridge. After a quick glance at their footwear I tell them they should be OK but at the first point when they have to do a little gentle scramble to decide then if they are comfortable with that, if they are, continue to the top and turn right along the path to Stob na Brioge and return by the same route - they head off.

The walk through the glen with BEB on my left and and BEM on my right is enjoyable and the hills look really dramatic. Nearer the road this hill comes in to view in front of me and I can't take my eyes off it. Back beside the car in just under 5 hours, it's just after 1pm and too early to head for home on a day like this so I carry on down the WHW and after a gate (the wrong gate as it turns out as I walked 100 yards too far on the WHW), strike off around the hill to pick up the broad ridge. As I missed the correct gate I contour the hill a good bit higher up than the fence line so have to walk through some rough ground with hidden boulders under the fairly low level ferns.

After ten minutes I saw three dead tree stumps and that rung a bell with a report Rod did on this hill so I worked my way over to them and picked up a feint path for probably a couple of hundred yards before deciding just to leave it behind and start the climb.

Without a path and on a fairly steep climb the legs were starting to feel it. I knew from the views I had had of this hill during the day that there would be a steep climb then a longer easier gradient on a sort of whale back ridge so I knew I was in for some initial hard work but it would get easier higher up. My route was probably a bit all over the place but it tended to be closer to the road side as I wanted to get the views to the bigger hills I had just climbed. The extra effort was worth it for this view alone

After the steep part of the hill was behind me there was a bit more of the boggy stuff, nothing difficult, just a bit of meandering and bog hopping before the summit came in to view. The last part of the climb should have been pretty easy but with jelly legs setting in it took me a bit longer than normal before arriving at the top. 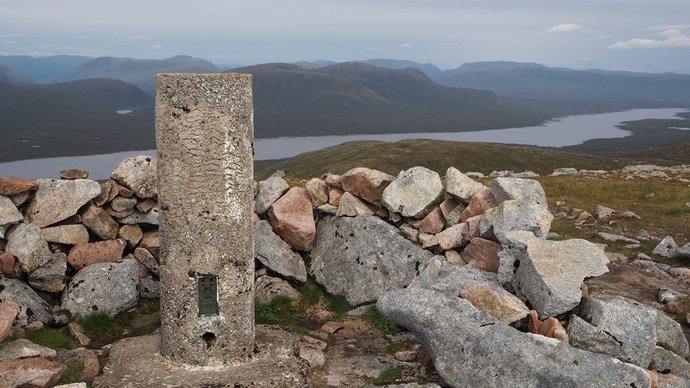 This is just a great viewpoint and would be a good hill to do in isolation - I'd love to come back here later in the year to see the hills with their winter coats on.

For the route down I went for the opposite side of the wide ridge (away from the road) and this seemed to be a bit drier although I still managed to disturb a few frogs. 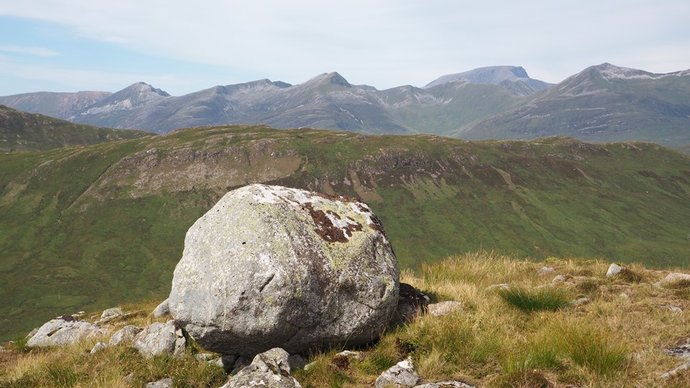 Back down on the lower slopes I found the path that runs parallel with the fence and followed it back to the WHW. It's a bit muddy, I made it to within 50 yards of the WHW before slipping and falling in to the mud

On the WHW I walked with a guy along to the Devil's Staircase, he was telling me that he had had fabulous weather all the way so far - I didn't ask him if he wanted to know the forecast for the next day (not good).

My final act as tour guide was to help two French ladies to find the path to Loch Etive, with my duties over I was back at the car.

What a brilliant day

My best walking day this year and to be honest, hard to remember many (if any) better days.

The extra Corbett added on an extra 600m of climbing and took about 2hrs 40 minutes to complete but I'm really glad I did it - the views were terrific.

Good report and some good pics , looked like a decent day.

hopper68 wrote:Good report and some good pics , looked like a decent day.

Thanks hpper68 - was a great day (we don't seem to have had many recently).

What a lovely M/C combo! Interesting to see Chrulaiste without snow. It is really worth doing it in white - on a good day the north face of Big Bookil really steals the show. Imagine that panorama of the Ben and Mamores in winter cover... I was lucky to see it, so worth the long drive from Inverness!

Big Bookil was our 5th wedding anniversary mountain... Stob Dearg was busy like a supermarket on Saturday afternoon

BlackPanther wrote:What a lovely M/C combo! Interesting to see Chrulaiste without snow. It is really worth doing it in white - on a good day the north face of Big Bookil really steals the show. Imagine that panorama of the Ben and Mamores in winter cover... I was lucky to see it, so worth the long drive from Inverness!

Big Bookil was our 5th wedding anniversary mountain... Stob Dearg was busy like a supermarket on Saturday afternoon

Hi BP - I do fancy going back to the Corbett in winter for the views - can imagine they would be stunning.

I was 1st in to the layby, by the time I got back to the car there were no spaces to be had anywhere and that was on a Tuesday.

Were you a member of Forfar? Great course.

Crieff, Dunkeld, Caerphilly, Coventry Hearsall, Leicestershire, Murrayshall and back to Dunkeld. Only ever played Forfar once and that was in the Grampian Boys which probably ages me somewhat