Decided to take retired doggy (Fly) out with us for a walk today which meant something short and simple. Having found a cafe that allows dogs in Torphins we decided to head to nearby Tarland so we could stop off at the cafe on the way back. It was easy enough to park in Tarland and the notice board directed us where to go across the humped bridge and then follow the signpost along a grassy track that followed the road. View from the start of the walk, love the golden fields at this time of the year! 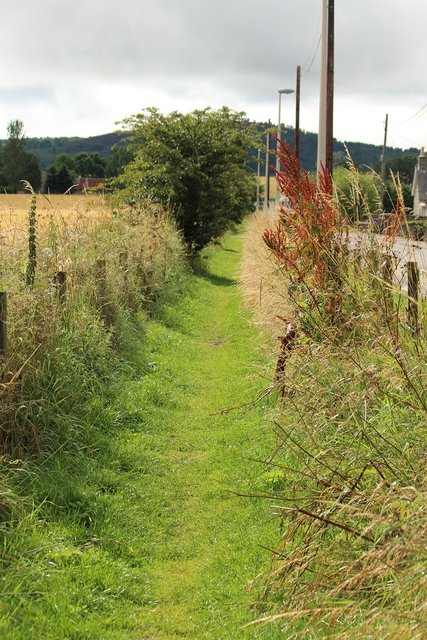 Grassy track alongside the road

The track led around the field giving nice view back down to Tarland. Before passing around a house and between fields of grazing until reaching the road. We crossed the road passing through a gate on the other side following a grassy track up to another gate. There were signs that cows had been in the field recently though I didn't see any there, needless to say I hurried through this bit! The other side of the gate there was a good gravel path, there is no marker directing to the stone circle where the path splits, but the rest of the path descends downhill looking if it goes back to the road so at the fork we just went uphill to reach the stone circle. There was no one else here and no sign that livestock are ever in this bit (which is enclosed) so I let the dogs off lead for a bit of a run about and for a bit of posing as well! Posing on one of the stones

After they'd enjoyed a bit of a play, it was back on the lead to continue the walk. Again there is no markers here but at the back of the stones there is a grass path that leads to a gate and across the field we could see another gate. I could also see cows though and I am not very comfortable crossing fields of cows! I did eventually notice there was a fence between me and the cows and so we crossed to the gate and went through to the other side, though I was a bit disturbed to find an old stone wall was all that was between us and the dreaded moo-moos! The path led downhill a bit through some ferns, though it was hard to see there was a path there at all! Path down through ferns

This led round the edge of the cows field to a spot where the wall was not going to stop anything from getting across. The marker directed me into the cows field... I could see the other marker on the other side... The cowards way round

We made it round to the other marker without any issues with the cows and continued following the path passed the house and onto a dirt road. From there there were regular markers and we followed the road until the markers directed us onto a path that led around another field. After the wheat field was another field of cows though happily there was a fence between me and the cows, I'm fine when there is a nice fence to keep us separate! The path led down through a small patch of woodland to the main road. We passed through the gate, across the road and through a gate on the other side to bring us into the main woodland area. 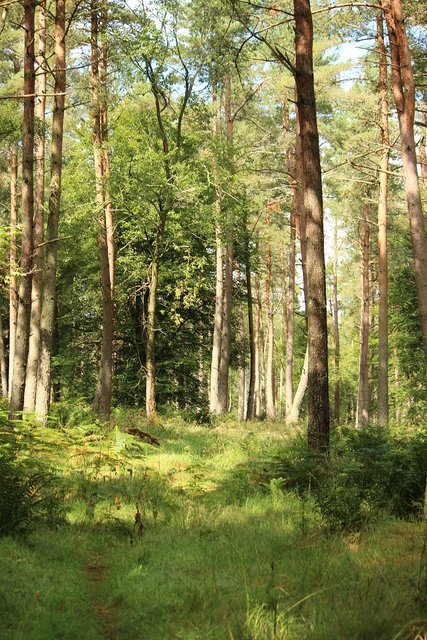 It was then a case of following the track through the woods, was a bit muddy at times but there were regular markers to direct the right way and this track led us all the way back to Tarland where we followed the road back to find the car.

In the route description on the website it mentions a locked gate, but we didn't come across any locked gates on the route. There is new fencing along part of the woodland trail to prevent cattle wandering off into the woods when they are being moved between fields.

Overall, a decent enough walk for taking retired doggy on to give her a nice change of scenery from her usual walks, though due to the cows this is probably not one I will be in a hurry to do again!