Ben Chonzie is a Munro and if you want to walk all of the Munros you have to walk it...I hadn't heard that much positive feedback about this hill so this was going to be a by the numbers walk for the tick.

My girlfriend had had her first taste of proper hill walking with a beautiful sunny afternoon jaunt up the steep slopes of Ben Vorlich (loch Lomond) she wanted to have another try. Today would be a real representation of hill walking in Scotland...

We left Glasgow very early in the morning and made our way up the motorway untroubled and we found our way to Crieff and then 'The Famous Grouse Experience' this made Samantha excited because she works for that lot. The road from there and onwards is narrow and gets rougher as you get closer to the Dam but there is a good amount of parking space but that didn't mater because we were the only car here.

We got ready and started making our way across the dam to the start of the walk proper. We had elected to walk Ben Chonzie via Carn Chois because, you know, that's a hill walking thing to do right? Loch Turret with Ben Chonzie away over there The only car in the car park

There's an old 4x4 track but it was pretty wet, a result of a few straight days of rain. We made our way along the road and turned off the road at a point that looked fairly easy to make an assent. The grass was wet but the walking was easy enough but I was puffing away. The wind was pretty strong and once we got to a sheltered spot we stopped to have some breakfast, we hadn't been walking long but we hadn't had anything to eat.

Once we had done eating there was a last little push and we found ourselves on some fairly flat ground but we couldn't see a thing, the clag was thicker than a Hill Billy but not much we could do about so we set off top hunting. The first cairn we found was a little stone one, we couldn't see anything in terms of views but in the gloom there was some movement, we could make it was a bird on the ground. At first we thought it's a Grouse but as it turned to offer it's profile the shape and beak were all wrong. We didn't know what it was, later research revealed it to be a Golden Polver.
A few minutes later we were standing on Carn Chois and took a few snaps. Getting down the rocky slope from Carn Chois was bit of a challenge, the rocks are loose, slippery and not really big enough to rock hop properly. Luckily that doesn't last very long but as soon as you come off the rocks you are straight into a wide boggy area. Sticking to the path through the bog was pretty tough but there is plenty of opportunities to stick to higher ground but there's lot of leaping and jumping here. Interestingly there were a ton of wild Strawberries everywhere, they look more like raspberries.
As soon as you get onto the slope of Meall na Seide the path is a lot better for walking and you get up to the cairn in no time. Across the bog to Meall na Seide

From Meall na Seide we just followed the path it starts off pretty good then you end up going across some boggy ground before you find yourself on a flat grassy section where you follow the old fence posts. The clag was still thick, so not being able to see what you are walking towards makes you lose the sense of distance, it felt like we were walking forever. There was quick break in the clouds and there away to our right was the summit of Ben Chonzie. We decided to cut the across the hill to shorten the amount of walking but for the odds of a few minutes it was pretty pointless.
The MWIS report said there was only a 20% chance of a cloud free Munro in the area and for the whole walk thus far it was looking like we'd not be getting the views but as we got onto the summit the cloud parted and we were lucky enough to get a view or 2. Approaching the summit of Ben Chonzie

The wind was brutal but as it happens there is a big stone shelter a the summit, I guess somebody knew we were coming

We sat in there out of the worst of the wind and enjoyed our lunch. I decided to eat everything I had because next target was Auchanfree Hill and a visit to Choinneachain Hill. 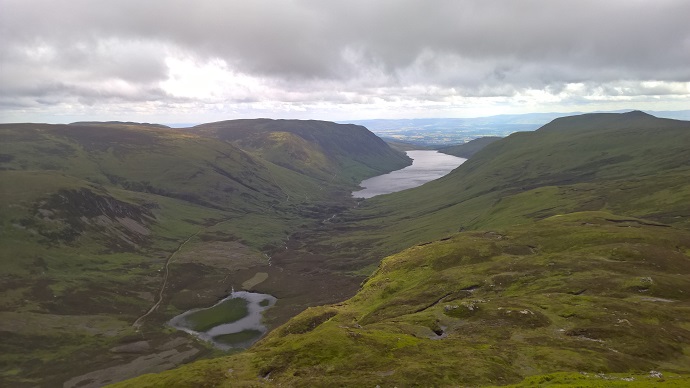 We made our way down to the side of Ben Chonzie towards to the bealach. Getting down was fine but from the bealach to the road was the most challenging part of the whole walk. The path down was poor, boggy and not much fun to walk but there was a lots of wee frogs to entertain me. I also spotted what I thought was a newt but it was far to big. It was a lizard, beautiful thing, before I got my phone out of my pocket it was gone, the wee bugger. It was clear the missus was finding the going tough now, we had a long walk, lots of assent, plenty of bog, strong winds and rain. It turns out she had gotten her feet wet at the very start of the walk and was suffering for it now, I asked he if she wanted to do the Corbett. I could tell by the lack of a clear answer what her feelings on the matter were so I took the decision for her...we won't be climbing up Auchanfree Hill. There is a road that's not on the map that would have taken us right up, it looked pretty new or at least redone anyway. It was a pity to come all that way to miss out on the Corbett but hey, there will be another time.

The road along the loch is in good condition but the rain came on really hard now and didn't relent for the whole rest of the walk. The car park was further away than we though and it took well over an hour to get back to the car. The road is crossed by 3 burns that were running strong from the rain but it's not that difficult to cross them.

Once back to the car park it was clear that we were no longer there alone. There was at least 10+ cars there now which made getting changed rather awkward

The girlfriend's feet were is pretty bad condition, she looked like she had double the amount of skin on them. I felt bad for her. The boots she had on went into the first bin we seen

I actually enjoyed the walk, it wasn't as bad as I though it was going to be. We touched a few different hill tops and got some good walking done, Ben Chonzie might not be the most exciting hill I've walked but is not the worst and I would like to return and do it on a nice clear day.