A nice day out in the Black Mountains. I'd climbed all the other Hewitts in this group last year and wanted to climb these three remaining from the west. The day started out soggy and overcast. Making my way up Mynydd Llysiau I was soon in cloud. Though the views were non-existent at this stage, the conditions were actually quite pleasant as it was already humid and I knew it would become unbearably hot if the sun broke through. 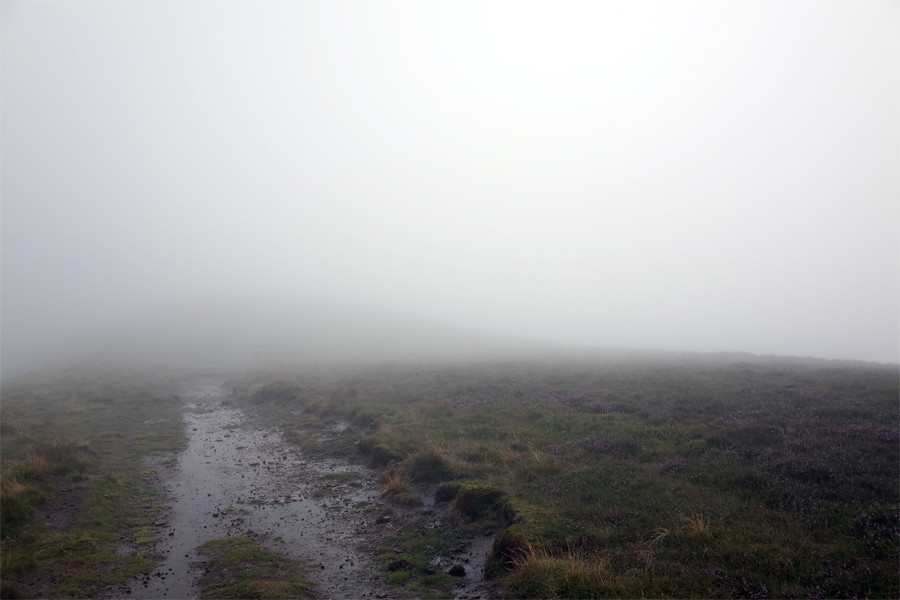 
The summit of Mynydd Llsyiau is marked by a tiny cluster of stones - hardly a proper cairn. The route south is easy if a little boggy and I spotted some wild ponies on my way to Pen Allt-Mawr. The climb up to that top is the steepest part of the day and adds some interest to an otherwise fairly flat walk. 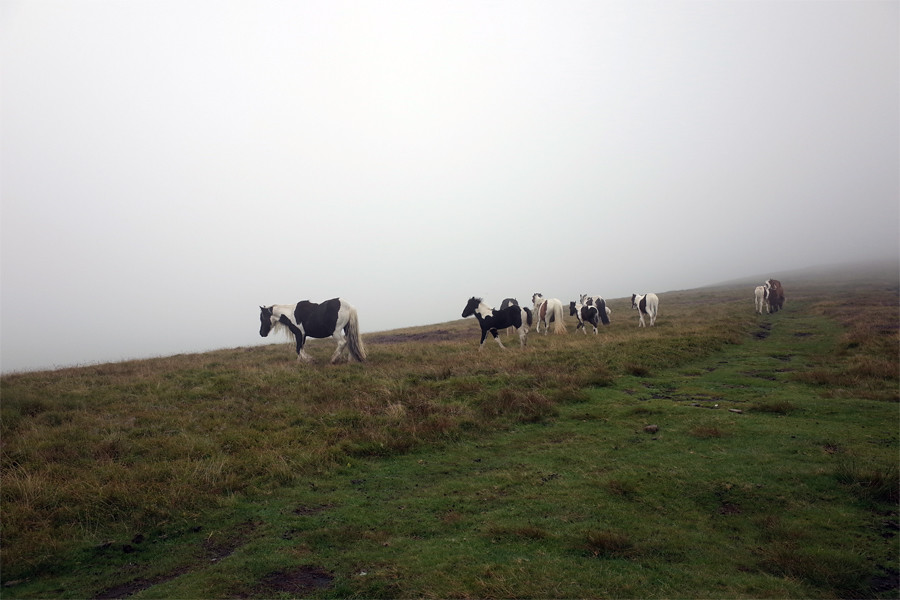 
Striking out west to Pen Gloch-y-pibwr I was able to see (and hear!) some twenty thousand people camped out in the grounds of the Glanusk estate for the Green Man Festival as the clouds started to clear and the sun broke through. It was surreal to see such a large concentration of people. These hills seem less frequented than their more famous neighbours further to the west and so far on the hill I'd not seen a soul all day. 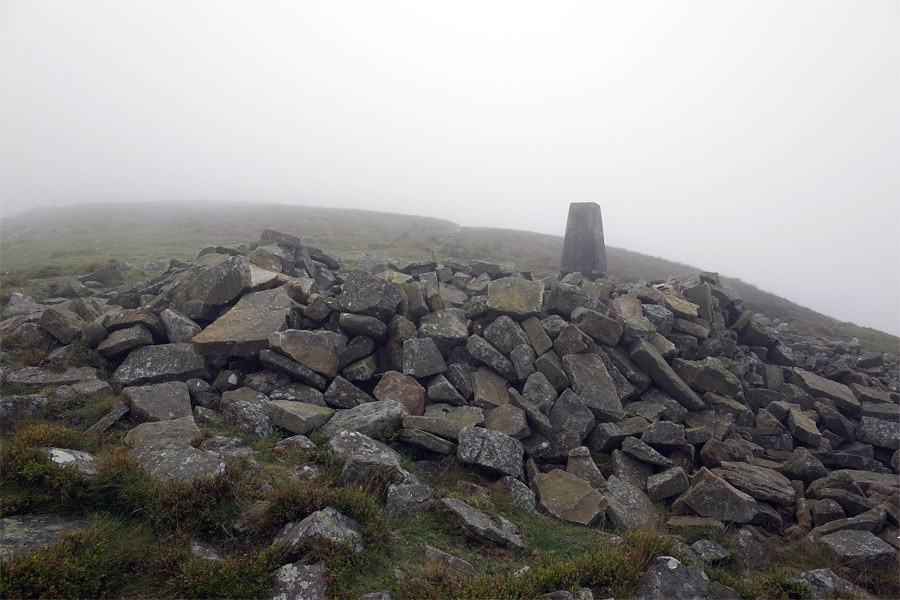 
Descending Pen Cerrig-calch I encountered quite a few festival goers walking up the hill to escape the crowds. By now the sun was really blazing and the last part of the walk, which skirts the hillside along the Brecon way was actually the toughest part of the day. My legs were already tired and this path undulates a fair bit before providing access back down to the valley. While the temperature by now was blazing hot the path was still wet and muddy and I very much needed my gaiters and boots. But goretex gaiters on such a steaming hot day made for unpleasant going. Belatedly applying suncream to my neck and arms it just was a waste of time as I was so covered in sweat it just wiped off. I had to ration out my last sips of the 1litre of water I carried (not enough for such a hot day) and I was glad to have left some more water in the car. 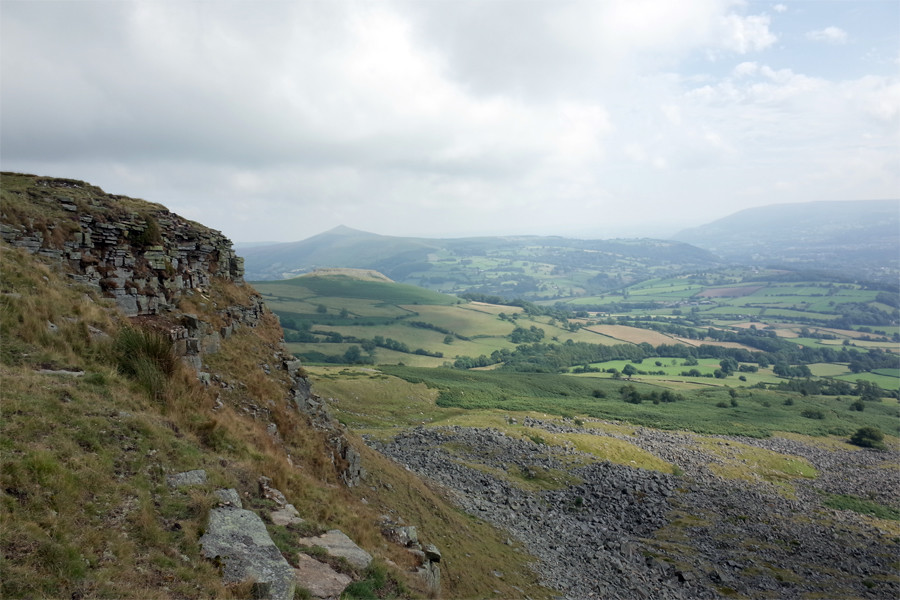 
All in all though a good day out. I was in two minds whether to do this walk amidst continuing worries over my hill fitness but I'm glad I went ahead. The Black Mountains really do feel quite wild and remote and I look forward to returning to them in the winter time. 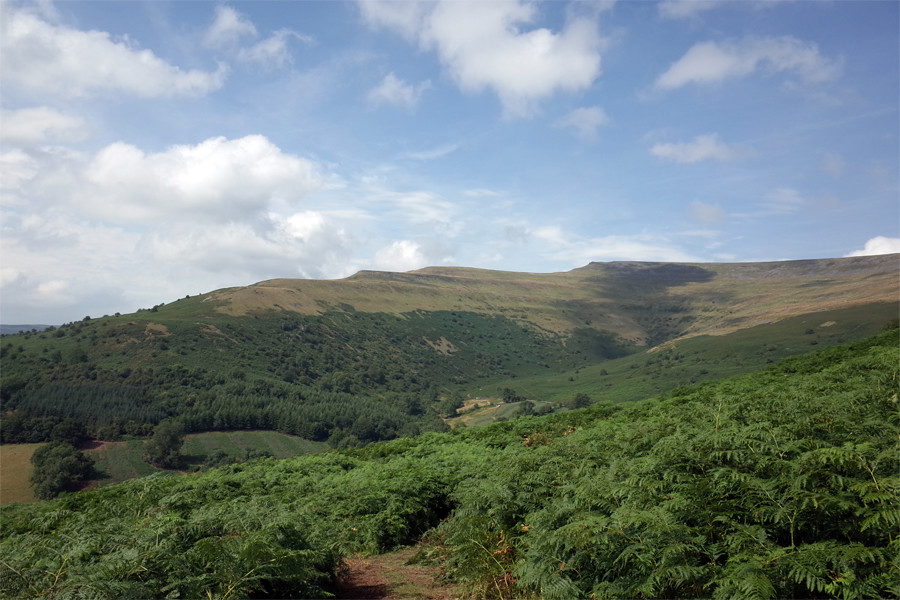 cwmdu_22_aug.GPX Open full screen  NB: Walkhighlands is not responsible for the accuracy of gpx files in users posts

Good stuff Riverman, your fitness must be returning but taking 1-litre of water for such a long drag with the sun beating down on you was a bit of a gamble, I take a litre to go to the end of the street

Those festival goers must be a different breed nowadays, when I was a lad hiking up a nearby hill would have been the last thing on my mind during a drunken festival weekend

Some familiar sights there from my trip a couple of years ago, when I slept on the summit of Pen Cerrig-calch. The Black Mountains are a fantastic area and I suspect I will return some day to my nearest mountains.

Glad you had a good outing. Take care.