MWIS reckoned 20% chance of cloud free Munros early AM and 70% by late morning onwards in the West Highlands so a bit of weather chasing took me to Arrochar for an 8.45am start from the large car park at Succoth (£1 for the day).

Surprisingly, I was able to take my time getting ready with the dreaded midge leaving me alone for once.

Crossing over the main road and entering the woods I saw an indistinct path heading off to my right within ten yards so took this and headed uphill through the woods. The path was muddy and overgrown but of more concern was the fact it didn't seem to be heading straight up the hill and was tending to contour back towards Arrochar. Eventually I got to the point where I was surrounded by ferns with no obvious way out so decided to retrace my steps back to the main track - 20 minutes wasted.

Back on the main track and thirty yards further on I saw the correct track so took it whilst still cursing myself for my earlier mistake. The initial climb through the woods was quite hard going, a bit damp, steep, fairly relentless and very warm with no breeze - a lot of stops on this first part. Looking over towards Arrochar

I was glad to get out of the woods and on to open land where I picked up a gentle breeze. Looking down to Arrochar Beinn Narnian feels like it has a series of giant steps. Steep climbs then a bit of flat to get your breath back then away it goes again. I like the way the views slowly open up, initially, along Loch Long, then Loch Lomond and Ben Lomond followed by The Cobbler then when reaching the top the views to the north appear and the route to Beinn Ime and the path down and over to The Cobbler. Looking down on the track with Loch Lomond & Ben Lomond behind The final part of the climb to the summit looks difficult, in amongst the rock faces there is no obvious sign of a path but there is and it's a straight forward climb to the top. The final climb to the top Taking a breather before another, final, climb to the top And this is another one My wasted twenty minutes at the start of the walk is forgotten now, the views from the top both near and far are brilliant. I didn't check to see which was the actual top but the track took me past all the cairns and as usual I touched them all. Now I can see Beinn Ime (closer than I expected) as well as the path that would take me up the back of The Cobbler. Looking down Loch Long (again) from the top of Beinn Narnain

A couple of photos taken I head off towards Beinn Ime, hopefully the clag will lift off the top by the time I get there. Looking over to Beinn Ime from the descent of Beinn Narnain

Things are a bit damp down at the bealach but a bit of careful meandering and a bit of hopping and jumping and the feet don't get that wet.

A good part of the lower climb up Beinn Ime is wet and muddy but like the bealach it is possible to find a way round most of it. It's also a much easier gradient and I'm able to do this climb without stopping (unlike Beinn Narnain where I had countless short breaks). 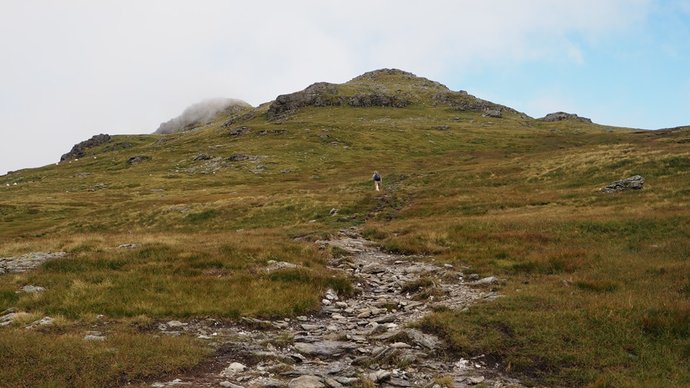 Upper part of the climb getting drier now The final climb with 3 people at the top

At the top the clag is off the summit but it was swirling around and the views to the north were fairly limited. Loch Fyne in the distance

I spent ten minutes at the top taking in the views and chatting to a guy from Edinburgh who was heading off to do Narnain. Back down the same route on Ime I'm now focusing on The Cobbler. Route up The Cobbler

As I clear the gate at the bealach and head towards The Cobbler it's noticeable that there are a lot more people about now. A group of 8 start the steep climb ahead of me but as they separate out they are all quick to let me past and surprisingly again I climb the hill without stopping. The initial climb is on a well constructed path with steps on a steep ascent followed by a bit of a flatish contour round the hill before picking up the main track for the final short climb to the top. It's a Tuesday - there are people everywhere

I knew this was a popular hill but it feels strange to come off two relatively quiet Munros only to find the Corbett fairly crowded.

At the top I put the camera gear away in the rucksack and left it in sight before making the final short rocky scramble to the top. Things were just a bit busy for my liking, I could see a group of 20+ approaching the top so I headed back down and over to the top which is closest to Narnain which turned out to be a really good view point (and only one other person who was on his way down). I took the main path off the hill and was a bit surprised how rocky and awkward it was so it was a fairly slow descent and I was glad to reach the main path running through the glen. On a decent path now I was able to speed up, passing the Narnain boulders on the way down. At one point there was a siren sounding which made me wonder if during the 6 odd hours I had been out in the hills we had gone to war

Once back in the trees the path drops quite steeply and then there are a series of zig zags before coming out at the car park again. Despite the beginning, a really enjoyable day and three great hills although I wouldn't fancy doing The Cobbler at the weekend (it felt a bit like Ben Lomond - only a bit lower).

Looks like the next time I will be in this part of the country it will be Beinn Bhuidhe or some of the nearby Corbetts. For an area I had never walked in a couple of months ago it really has grown on me and each visit has been really enjoyable.

I done this walk (different order) as my first of the year and it killed me lol. I sat at the top of the Cobbler for 40 minutes, not a soul in sight

teaandpies wrote:I done this walk (different order) as my first of the year and it killed me lol. I sat at the top of the Cobbler for 40 minutes, not a soul in sight

Was it four in the morning when you were on top of the Cobbler (hard to imagine any other time when it would be empty for 40 minutes)???

Didn't know about Beinn Luibhean - just checked the map, I do now.

teaandpies wrote:I done this walk (different order) as my first of the year and it killed me lol. I sat at the top of the Cobbler for 40 minutes, not a soul in sight

Was it four in the morning when you were on top of the Cobbler (hard to imagine any other time when it would be empty for 40 minutes)???

Didn't know about Beinn Luibhean - just checked the map, I do now.

A beautiful midweek morning. I was on the Cobbler for 40 minutes totally alone. I did pass people as I was coming down so must have hit the sweet spot in the morning

Great pictures Gordie. I am weighing up the option of doing Ime (and Luibhean!!!) next Friday evening.

Great to have clag free Munros in this fickly summer

I haven't yet done the cobbler, but remember the great views from Beinn Ime and especially the fun path and scrambly bit of Beinn Narnain

Graeme D wrote:Great pictures Gordie. I am weighing up the option of doing Ime (and Luibhean!!!) next Friday evening.

I hope you get a wonderful evening next Friday for both Ime and Luibhean (!!!!!!)

I myself shall return to do Luibhean shortly (as I'm starting to feel guilty about missing it out).

ancancha wrote:Great to have clag free Munros in this fickly summer

I haven't yet done the cobbler, but remember the great views from Beinn Ime and especially the fun path and scrambly bit of Beinn Narnain

The three hills are a lot closer together than I was expecting, great views from all of them although I missed the views to the north from Ime.

Only downer on the day was a lorry and a bus meeting on a bad corner on Loch Lomond side which meant a delay of about half an hour getting home while they tried to manoeuvre past each other.