Knoydart day 2 - the Med comes to the Highlands

Knoydart day 2 - the Med comes to the Highlands


Sgurr Choire Coinneachan.gpx Open full screen  NB: Walkhighlands is not responsible for the accuracy of gpx files in users posts
Thankfully the wind had increased overnight and the midges of the previous evening were all cleared away. Despite some rain on the tent earlier in the morning, I was pleased to open the door at 8am to sunshine and some considerable heat

Inverie Bay in the morning: 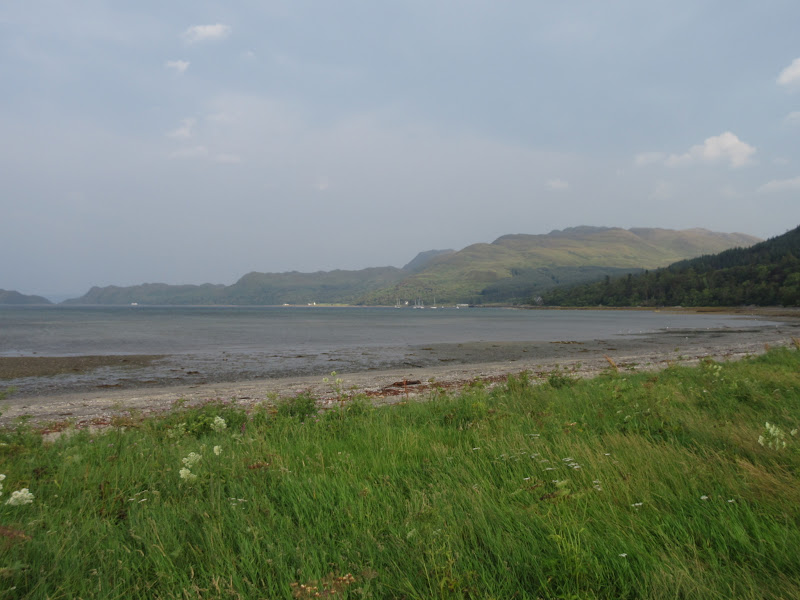 Alan was off to catch the first ferry back to Mallaig, as he had some bothying planned before returning to Wales. Between his relaxed approach to the trip (a Ladhar Bheinn summit camp was doomed from the point it was suggested about a month ago) and my bagging gene taking control, we didn't actually walk anywhere together, but it was great to have some company and a few beers both evenings. Not to mention camping out on the west of the peninsula on Friday evening - something that wouldn't have occurred to me had I been on my own. 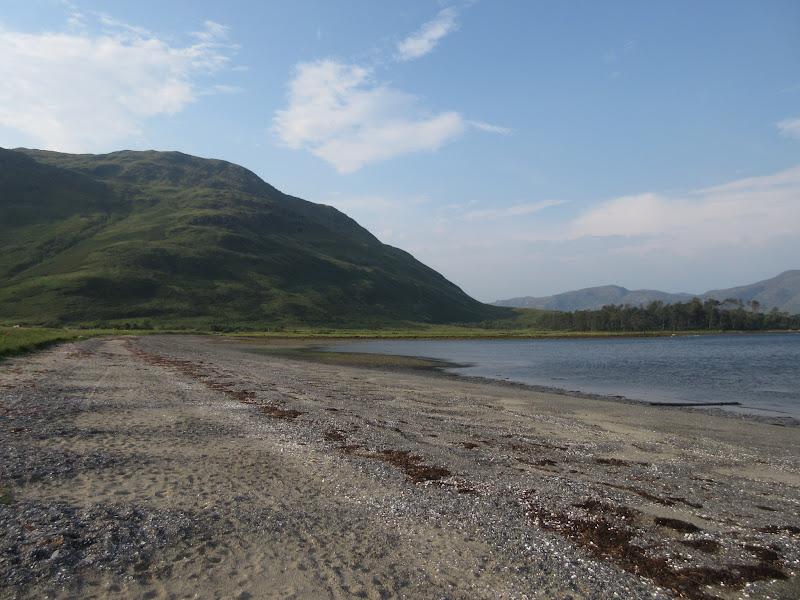 I was on my way to Sgurr Coire Choinnichean by 9:30am and I didn't need to be on the ferry until 2pm. No need to rush then

. I headed up next to the burn behind the campsite, which is the main water supply for Inverie. The obvious way from where I was standing was the eastern bank, and there was a faint path through the shoulder high bracken. It was wet and brutal though! Turns out there is an easier way on the western bank which starts further back in the village. Oh well - it didn't take me too long to get onto the ridge and a more pleasant gradient, plus the path which came up from Inverie itself.

Sgurr Coire Choinnichean from the campsite: 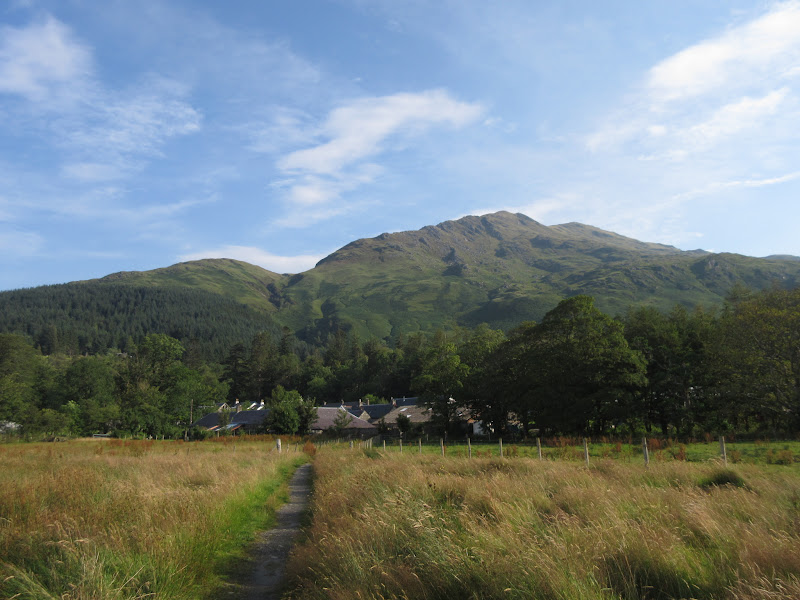 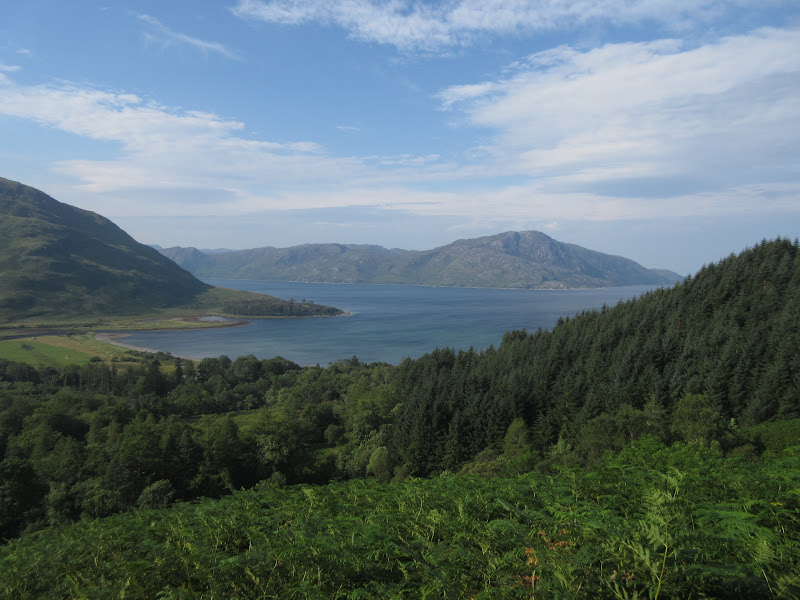 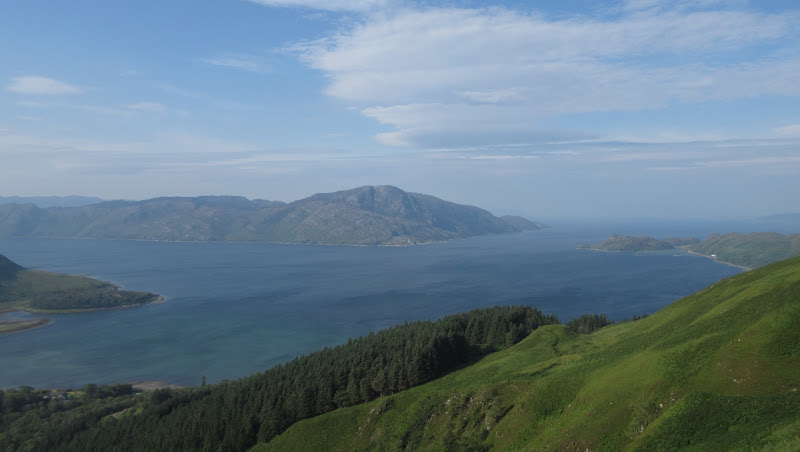 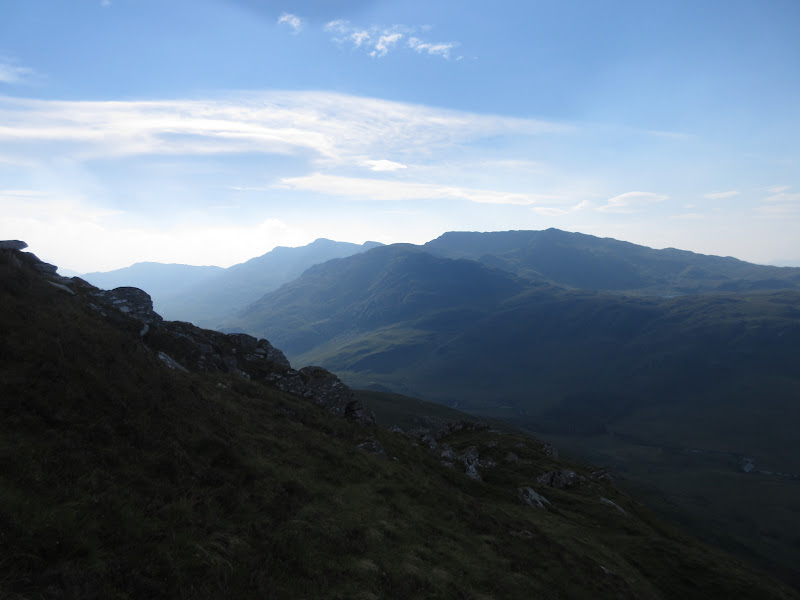 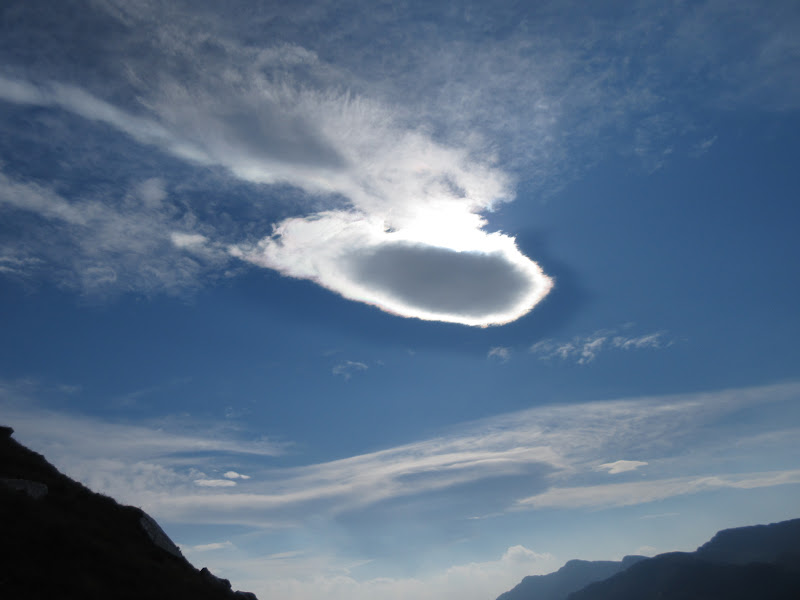 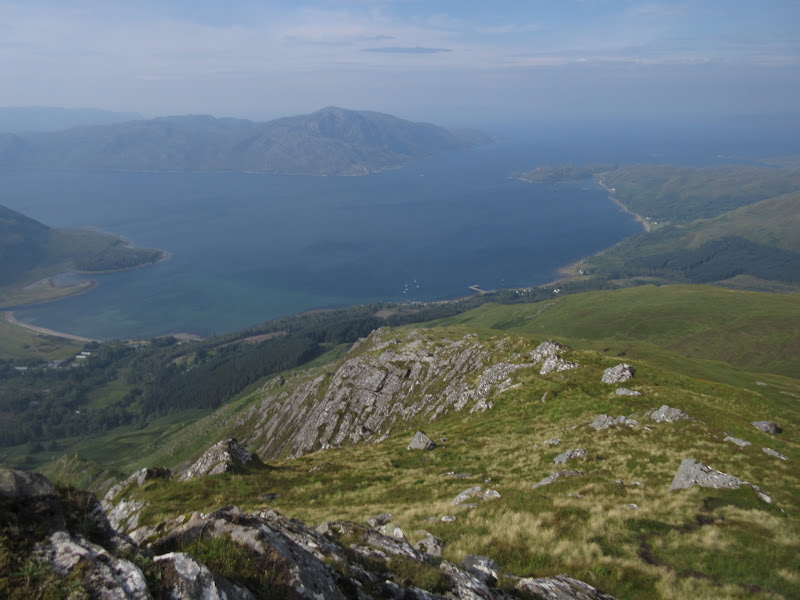 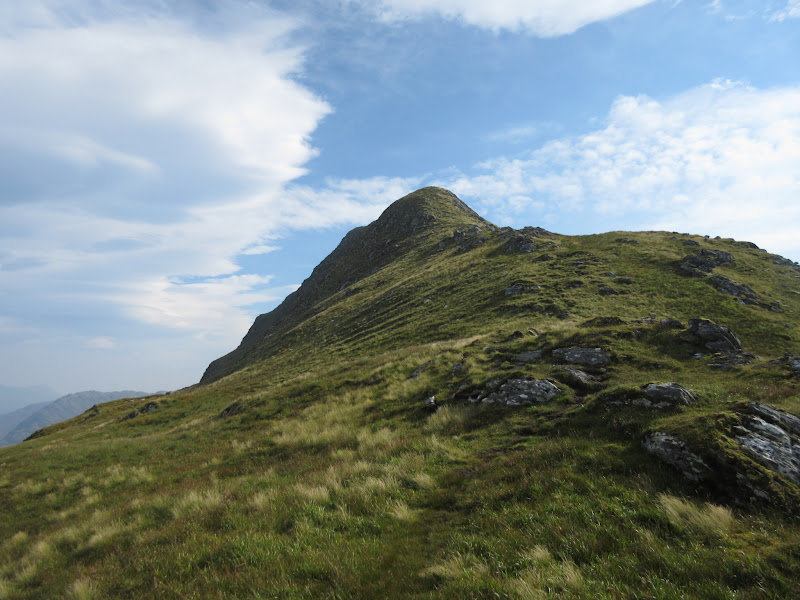 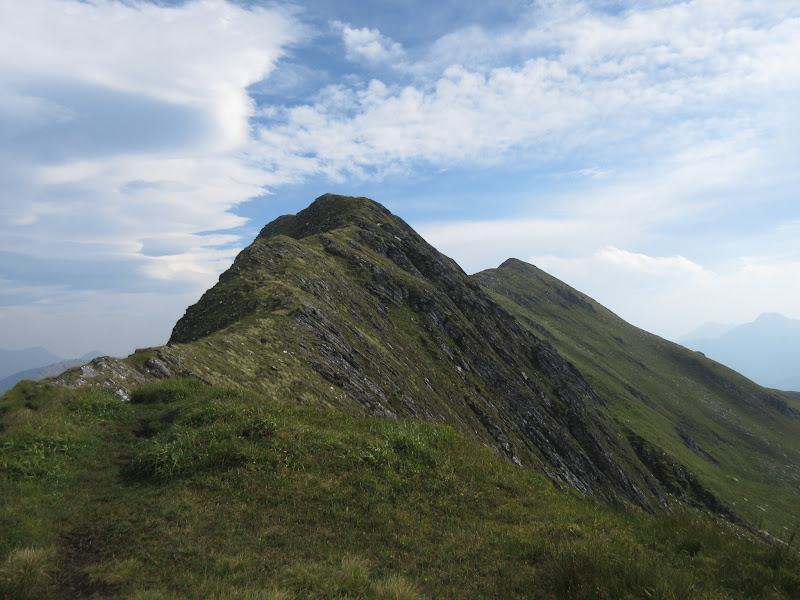 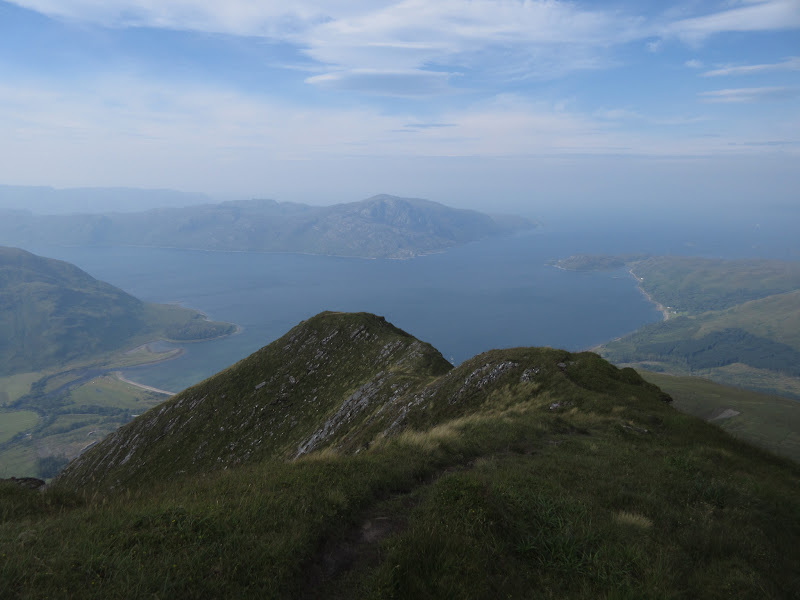 I had a stop at the summit out of the wind. The easiest way back seemed to be a descent of the southern slopes to Gleann an Dubh-Lochain from a point between the two summits.

Meall Buidhe with Sgurr na Ciche poking out behind: 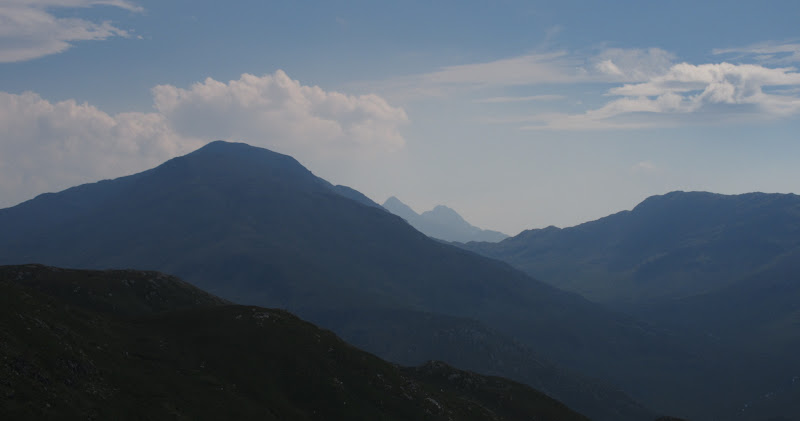 This is the route I took down, which again got rather rough and bracken-strewn in the lower reaches. Then a quick stroll back to the tent where I took my time packing up in the sunshine. I had thought to have some coffee and cake in the café opposite the Knoydart Foundation shop but it was shut when I got there. The Old Forge, however was open, so I thought it would be rude not to have a pint. I was able to enjoy this in the Med-like temperatures outside before wandering round to the quay for a Balearic boat ride back to Mallaig. I bet people don't say that often! 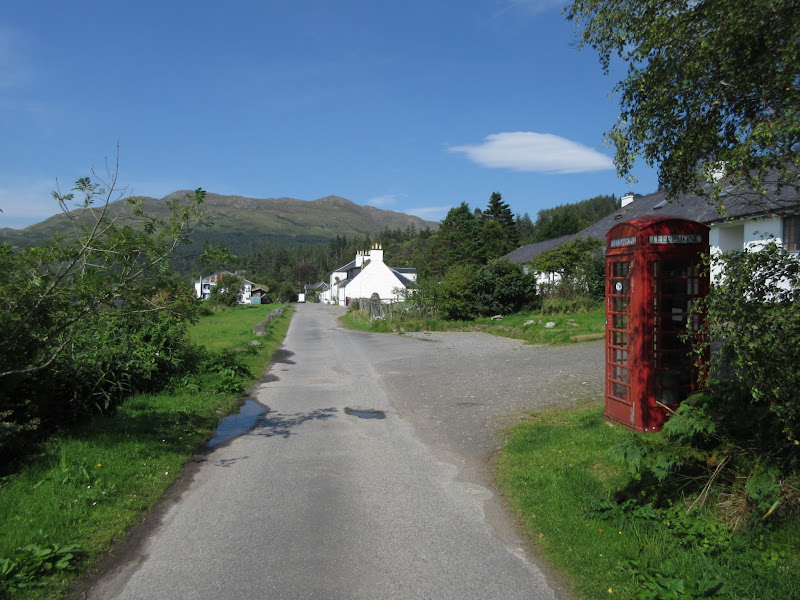 …for a nice pint at the Old Forge: 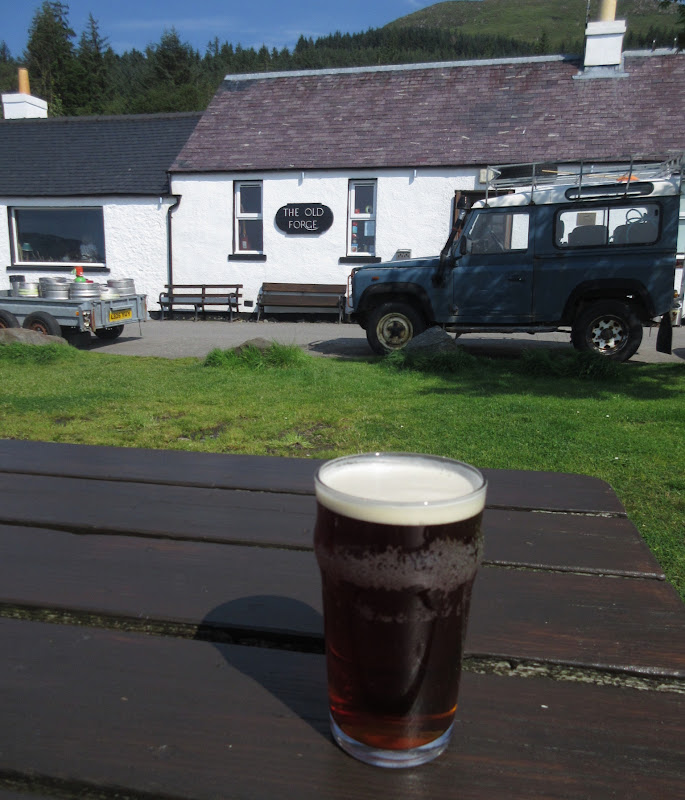 Ripples on the bay: 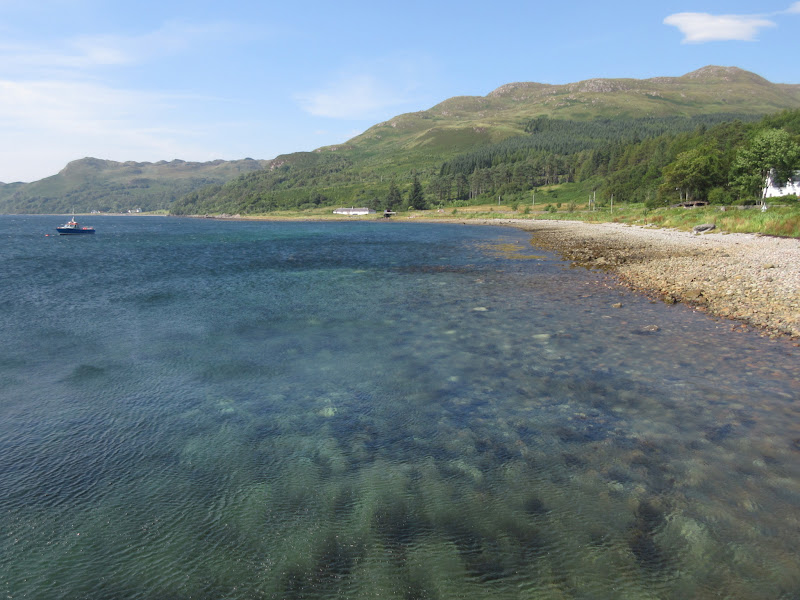 Much as I would have liked to stay longer, this was the latest ferry that would allow me to get the 6:15pm last bus back from Fort William to Inverness. Before that though, a lovely boat trip to Mallaig, a relaxing 90 minutes having lunch and ice-cream on the harbour front, a spectacular train journey back to Fort William and a quick pint in the Nevisport bar. Not a bad way to round off a weekend 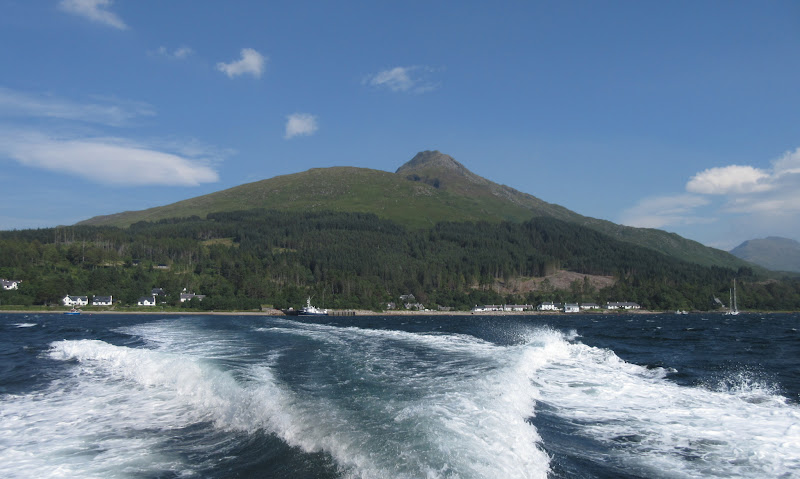 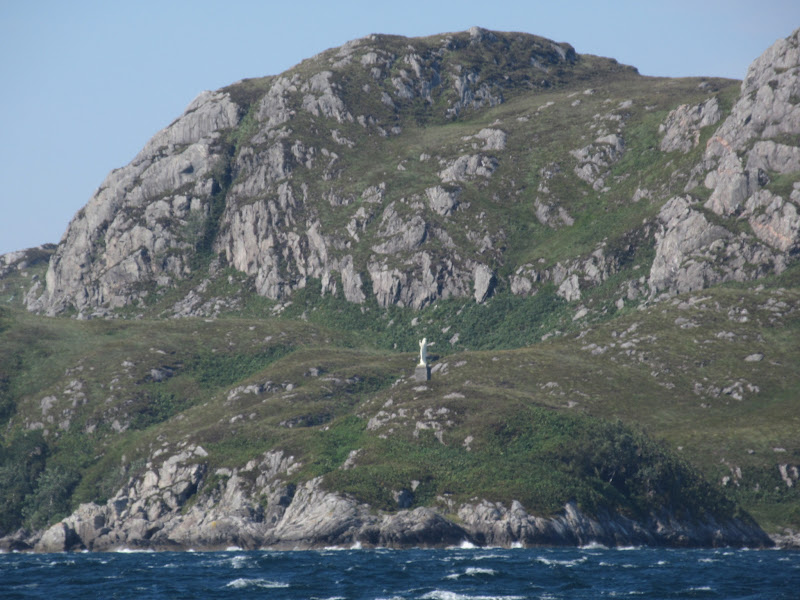 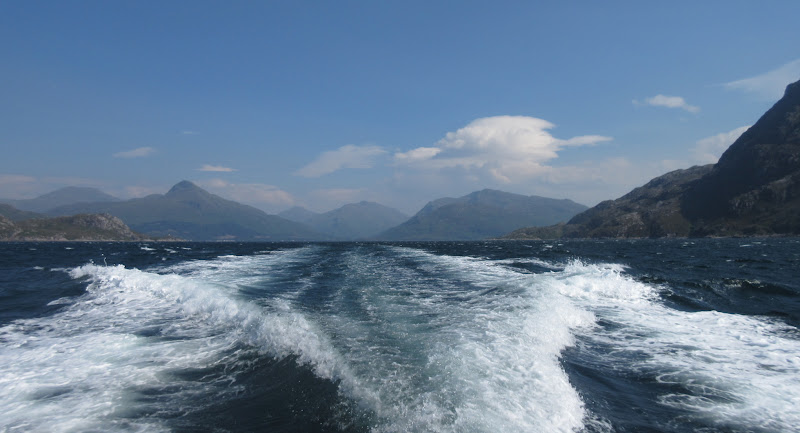 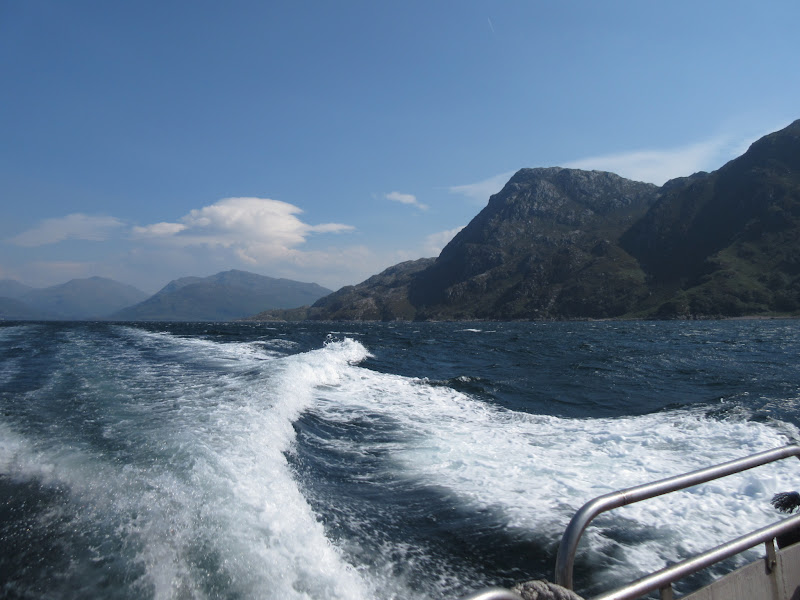 Mallaig harbour and the ferry: 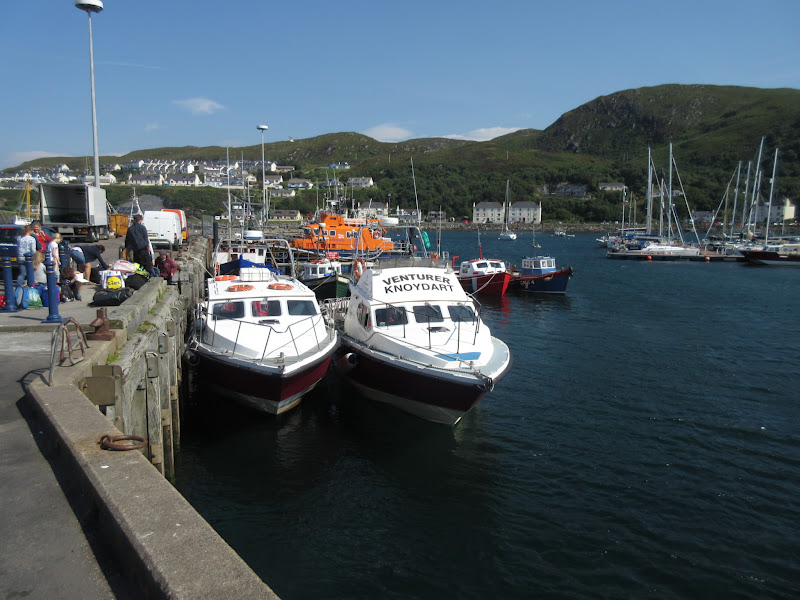 Cheers to Alan for putting out the invite for this trip, as I probably wouldn't have done it otherwise. The need to organise travel a few days in advance coupled with the desire to get decent weather there would have had me endlessly pushing it back for another time. As it was, we pretty much hit the weather jackpot (as far as this summer goes at least).

Re: Knoydart day 2 - the Med comes to the Highlands

What a cracker of the day! Lets hope summer will stay a bit longer

Still have to have a pint at the old Forge

Re: Knoydart day 2 - the Med comes to the Highlands