After a hectic week away at a music summer school, a restful Sunday might have been a good idea - but there haven't been any days this summer when my free time and dry weather in the North have matched up, and there won't be many more when they can. So my one concession to sense was to get up to get the 9am bus from Glasgow, in the hope that I'd make the 6pm rather than the 8.15pm bus home.

It feels a bit of a waste to go up that way and not take the train, but a Sunday was all I had, and the trains don't play very nicely then. So I did get the nice twisty north of Loch Lomond, and a definite feeling of retracing WHW steps, before being deposited outside the Bridge of Orchy hotel.

I remember this part of the world as a very rivery place - 'the glens where your great rivers run', according to the song I had stuck in my head for two or three days of the WHW -so I went down to visit the bridge before heading for the hills. Beinn Dorain is a landmark, but by Bridge of Orchy the classic view of it is past, and after heading up the hill to the station and under the railway line the path heads straight for the gap between the two hills. It's a nice path although a bit stony, rising up beside a deep winding stream valley. Once into the corrie it all got a bit soggy underfoot, and there was a bit of hunting around for the best path, but after a while the path led over to the burn, where I had my elevenses although it was after 12, and then more drily up the other side.

It was an impressive place otherwise, with cliffs towering up on both sides and a beautiful thin line of waterfall coming down on the Beinn an Dothaidh side. 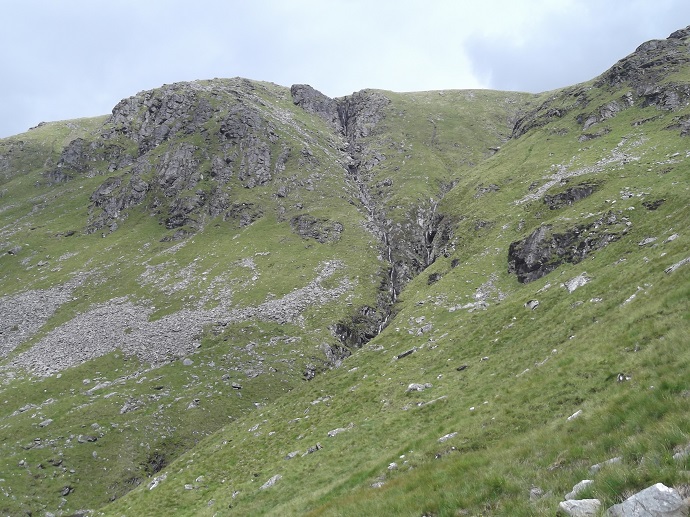 The climb out of the main corrie was even more stony, the kind of stones that seem to have just been dumped there to make things difficult, rather than coming from the ground, but it led up into a little upper corrie, up above the level of the cliffs, and then out to the bealach, where there was a tiny pool, and the first view of Loch Lyon. Pool at the bealach

The stream running down the valley on the other side seemed to clearly run into Loch Lyon, but when I looked at the map afterwards it actually curls back on itself to come round the hills and into the Orchy. It's a very curvy landscape here. 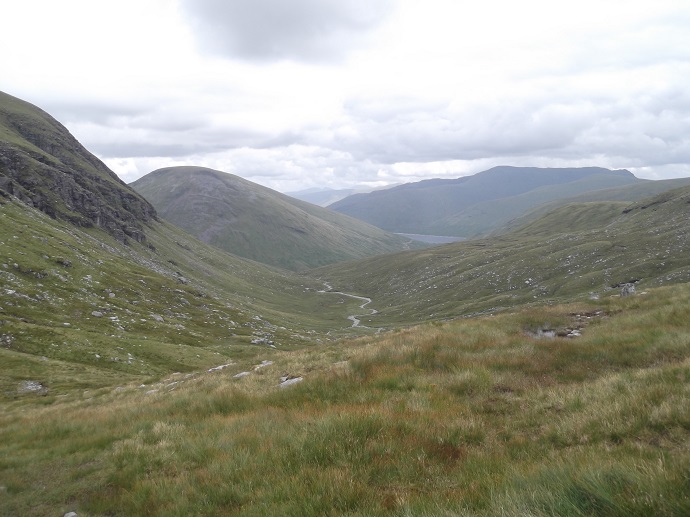 There was supposed to be a clear path running along to Beinn Dorain, but I must have been looking in the wrong places, because I kept finding bits of unclear path instead. I went up a great slab kind of place, all sloping rock and perched boulders, and over some bumpy bits, to come out on flatter place by another little lochan. From here I was definitely on a clear path, but I was surprised after a while that it was never rising up to the top of the ridge, where I thought it should be - sometimes it even seemed to be going down. After a while it did start to cut up the hillside for a bit, but then went along again - but it was clearly a well used path and must go somewhere, and where else was there to go. Just when I was really starting to wonder if I'd ever get to this ridge, I found that I was at the end of the hill, facing Beinn Odhar across the railway line. I was also much closer to the summit than I had realised, as the path turned back on itself and led straight to it. Presumably I'd found the bypass path which I was meant to be ignoring - but if so I'd ignored the main path so successfully I'd never seen it! It made for a nice out and back loop, though, so was a good mistake - I'm never so keen on going over the same thing twice.

The summit had good views south - all the hills around Crianlarich - as well as west along Loch Lyon into Perthshire - a nice middle of things feeling with mountains all around. I didn't hang about on the summit, because I could see now that there was a lovely clear ridge path along to Carn Sassunach, and I thought I'd get along there before eating my lunch.

(I did feel a bit guilty about it, because I know I've come across the idea that if you don't linger at summits you're a Bad Person who shouldn't be allowed on the hills - but I still seem to have a walker's concept of a tour past various points, rather than a climber's one of reaching the top and coming down again. Summits can be very nice, but they're not everything.) Anyway, I liked Carn Sassunach just as much as a viewpoint and it was a nice lunchspot (even if it was nearly 3) - and it had a better cairn to sit against. Looking back to the main summit I ended up with the feeling that I must have been making a meal of the way up - almost two hours from the bealach to the summit, just over an hour down again, and it all seemed much simpler. It was easier to follow the main path down, but I could see why I’d lost it, and also why some of the choices it made further down had seemed a bit unlikely on the way up. 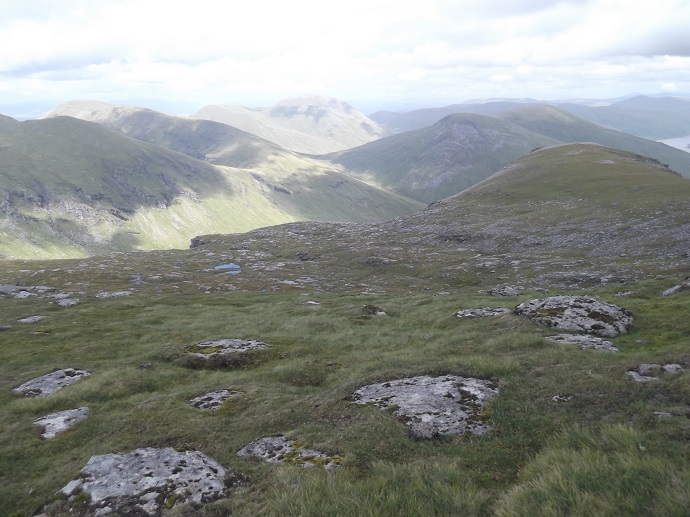 Back at the bealach it was just after 4 - I’d taken 3 hours for the first hill, and it didn’t seem like I was going to get up Beinn an Dothaidh and back in an hour to get the bus, but on the other hand it was daft to have climbed two thirds of a hill and not finish it, on a nice day, and if I missed the bus I’d get a nice rest at the Bridge of Orchy hotel anyway.

Beinn an Dothaidh was a different, at least from this side, less rock and more grassy slopes. There was a clear path for a bit, then a rocky bit which couldn’t decide whether it was actually a stream, then just an arc of slopes with no particular path. I got a bit mixed up in wet bits trying to find the best line, then found a path again which brought me out between two possible summits far sooner than I'd expected.

With so many hills around here just springing straight from the earth, I was a bit surprised that these two didn't, with Beinn Achaladair definitely joined on as part of a ridge. I tried the lower southern summit first, which had a beautiful mountain view south, and an even better one (to me) of Rannoch moor through the gap between the main summit and Beinn Achaladair. I made it to the main summit about 4:30, surprised at just how easy it had been. I was also surprised by just how nice a day it had turned out - the forecast had been cold with light cloud, but there had been a lot of sun, and it was warm whenever the sun was out although quite cold in the shade and wind. The real summit had even better mountain views, but it was still Rannoch moor - half land and half water, half light and half shadow - which really took my breath away. It was now looking again like I might have a chance for this bus, and although I know it's a shame to rush a hill I did want the not too late night. I don't seem to have taken any photos on the way down - I must have been too busy just descending. I did try following the path down from the top but just ended up losing the lower part, so I have no idea if they ever meet or not.

It was quite a quick descent all the same, and I was back at the bealach a few minutes after 5, and kind of committed to the attempt - I wouldn't have minded too much having no chance, but I didn't want to wander down and find I'd just missed the bus. So there was no dithering allowed on the way down - but I was only retracing my steps, and I did come out on the road a few minutes before the bus came along. (I then spent so long in Glasgow dithering about where to go for dinner that I didn't really get home any earlier than I would have done by having dinner at Bridge of Orchy and getting the later bus, but that's another story!)


BeinnDorain.gpx Open full screen  NB: Walkhighlands is not responsible for the accuracy of gpx files in users posts