Hello fellow walkers. This is my first post. I'll try to keep it brief.

Had only a few days up in Braemar and wanted to see as many of the Cairngorms tops as possible. Devised a plan, based on mrssanta's report of '3 days 6 hills…' (thanks!), but condensed into one day.


our_route.gpx Open full screen  NB: Walkhighlands is not responsible for the accuracy of gpx files in users posts
This is what transpired…

0500: Up, faffed about. Ate jam slathered butteries and drank tea - breakfast of champions - while listening to Braemar's best and only radio station.

0615: Arrived Linn of Dee car park. Ticket machine shattered the peace of the forest while dispensing my ticket (sorry car sleepers). Who designed these machines?? Zinc Oxided my heels and toes to hell (2 month old boots still giving me jip).

0630: Set off, battle speed (not running, just walking with purpose). Pursued by midges (more to follow).

0800: Arrived at ford at foot of Carn a' Mhaim (didn't want to waste time heading up to Luibeg Bridge and then back south). Made the mistake of stopping to look for the optimum crossing point. Midges gathered en masse and attacked. I took a lot of hits but I took a lot of them out too. They just… they just kept coming though. I ain't goin' back there, not never…

0900: Corrour Bothy. Passed a jolly, bobbled-hatted, naked man performing his morning ablutions in the Dee. Small penis. It was cold, I'll give him that. Several tents pitched, it being Sat morning I guess. Didn't stop. To the Devil's Point!

0930: Scrambling up rubbish excuse for a path to the south side of Allt a'Choire Odhair, midges take revenge. Clever girls (and boys). They knew my hands were out of action. All the way to the bloody top too. No wind. Carnage. Lesson: don't copy the people in front of you (four guys ahead of me chose this path and I was a sheep). The map indicates a path which splits, one section heading up the north side of the stream. Apparently this is better, less scrambley.

0945: Sat on top of the Devil's Point (Adam Watson says this name is a euphemism for the Devil's Penis). Amused and chuffed. Sky clearing. Chat with two guys about weather and how to get a space in Corrour Bothy, German style (get there early and roll out your sleeping bag before going out climbing). I thought bothies were for emergencies anyway?

0950: Great views over to Stob Coire an t-Saighdeir. Cracking on.

1100: Cairn Toul. Views, looking either way along the ridge - just can't express it. Can someone express it? Surely poets have seen this stuff. The scale of it all is quite overwhelming, especially when you're there on your own. Photos don't do it justice either, especially not my ones. An inquisitive little fellow joins me for a snack, the first non-midge wildlife I've encountered that day. He's sporting some trendy yellow and red bird anklets. For upholding the standards of fashion even in this wilderness, I reward him with half an oatcake. Practical hat on. I'd calculated that if I wanted to reach Braeriach, smell the roses a bit, with enough time to get back down for Monadh Mòr and Beinn Bhrotain and be back home for a reasonable hour, I'd need to get across to Braeriach by 1330 at the latest. The only thing stopping me would be the overwhelming need to stop and look back and take photos of that ridge: 1300: Braeriach. Claggy. A couple of sorry looking huddles of people sit around eating pieces, like extras from The Road.

Now, I'm not comparing myself to Jesus, let's get that straight. All I'm saying is why did the clouds part when I arrived?

Double, bloody, waow. What must this be like on a cloudless day let alone a mixed day like that? I think I would cry or vomit or faint or something. Some kind of psychosomatic reaction.

Anyway. Ate my pieces. Drank my drink. Consulted my navigational instruments. Plan was to head via those cairns that dot the west side of the plateau via the Wells of Dee, from where I would also quaff.

1315: Heading off Braeriach, the summit is engulfed again by clag. I'll let you decide, but I think twice is enough to prove that it's no coincidence.

Passing by the Wells of Dee, I see this: Any ideas? A north point I thought for disorientated peeps, but I'm pretty sure it was pointing westish. Or is it some kind of devil's trident… Had I gone too far with my heretical thoughts...

Exact timings from now on are a bit hazy. 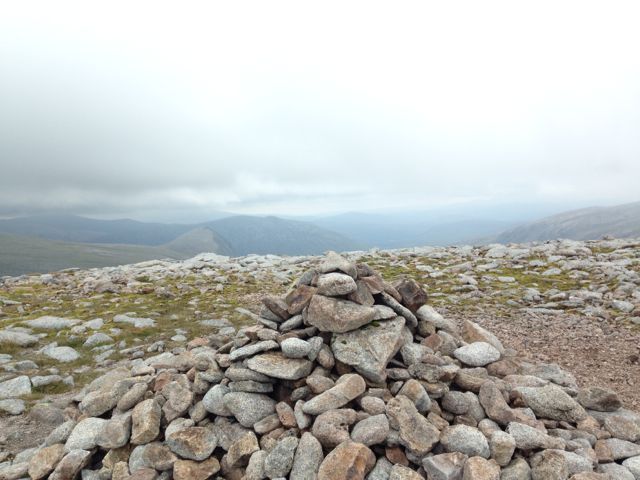 Getting off that mountain was fun - tired, poor visibility, slow moving due to boulder fields.

Can't remember if it was Carn Cloich-mhuillin or Carn Fiaclach I popped up on the way down, but one has excellent views, a nice wee cairn and some very ergonomically positioned/shaped boulders.

1800: Reach the path that runs along the south side of the Dee. Extremely hard to find and stay on the path/paths which come southeast off Carn Fiaclach. Knackered. Throbbing feet. I thought I could actually hear them throbbing. Also swore that I hallucinated White Bridge several times. Tired people, this is what to look out for: 1800-1940: Pursued relentlessly by midges from White Bridge to Linn of Dee. Forced to jog some of this in, which is a shame as I wanted to have a closer look at the abandoned townships that dot the glen here. One hell of a final walk though, never-ending.

Final time for the day: 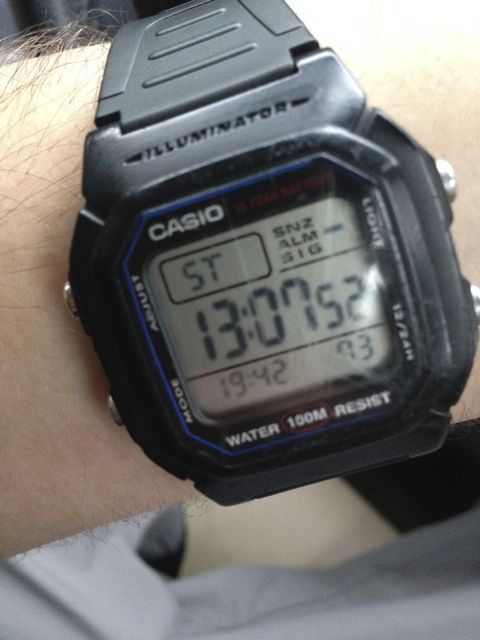 Give me blue skies and zero midges, that'd be a perfect day. As it was, I was pretty chuffed.

The Road is a great film.

So I've been told. Maybe I should check it out

Phew! But you know what? I didn't even look, just added it for dramatic effect. Whoever you are, apologies - I'm sure you have an average sized penis. Anyway...

This was a hard slog and at just over 13 hours, not perhaps as enjoyable as if I'd dawdled a bit more. The walk in and out were real killers.

Is it much easier/shorter from the north? Haven't looked into it. I still have Cairn Gorm, Bynack More and Beinn Mheadhoin to get from the north.