The plan had been set, both Chalky & Stuart had there goal in mind "Nevis" may only ever climb one so if it's to be done then they may as well tackle the biggest, I also enlisted my mate Scott & his son Marcus..... As per the norm it would be another early start, meeting in Callendar @ 04:00, well that was the plan just need to get Scott a watch for the nxt climb

We decided the route would be from the North Face car park, at least that way they get to see "The Real Nevis" the dark Grey rocky cliffs that stop you in your tracks & make you reach for your camera.... daring you to keep going. We made good time and had boots on the ground just after 06:15, the initial walk up through the forest is pretty steep but the path is good so the going was pretty fair, a stop at the bench gave the guys time to have a quick drink and take in their first views of the Majestic North Face. The plan was to move up towards the CIC hut then swing a right crossing the river and making our way up to the half way Lochan. The weather reports had shown pretty good weather with clear spells that would last until midday then things were to change bringing in cloud, rain and high winds. We were on a timescale trying to beat the weather forecast however things were looking pretty good, clear blue skies giving the perfect view allowing plenty of photo time. 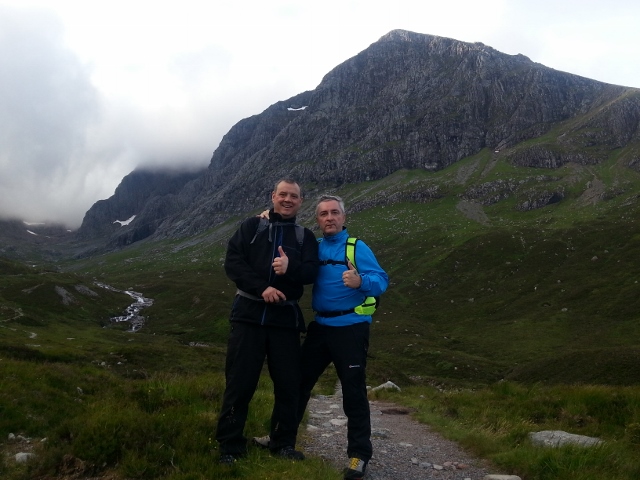 The further up the track we went we could see the mist starting to swirl on the summit making it look like something from a Hammer Horror movie. This only made it more spectacular.
We worked our way up the track, the craic was good and the weather was holding up so so far all was good. We swung of the track and crossed the river working our way back up the flank heading towards the half way Lochan, a quick stop and again time to take on some much needed refreshments. As we neared the Lochan you could see some wild campers who had pitched the tents at the waters edge, wild camping something on the to do list "Summit Camp" Scott & Marcus En Route Up From The River

We were now on the Mountain track and would work our way up through the Zig Zags until the summit was within our grasp, It was a busier day now, we had had the route to ourselves until we hit the Mountain track and then the bodies started to appear. So far up we stopped off for another break, not sure if this was really needed or just a chance for Chalky to drop 40lbs of weight from his rucksack

i.e his flask, He likes his T but when we saw the size of his flask we thought he was opening his own T room. Myself & Andy had mentioned that Snowdon had a coffee room at the topso Chalky obviously saw an opening We worked our way up and eventually hit some snow, this resulted in a mini snowball fight and some more pics while we watched others trying to negotiate the snow slide. The summit was now in sight and the final push commenced, Chalky was moving much lighter now that he had sold all his Tea, The snowball fight had ended before any real injuries were had and we were now starving and looking forward to a bite at the top. After reaching the summit we did the normal routine stuff, pics on the trig point, in the hut and hanging from all the ledge bits for photos to make your partners cringe lol 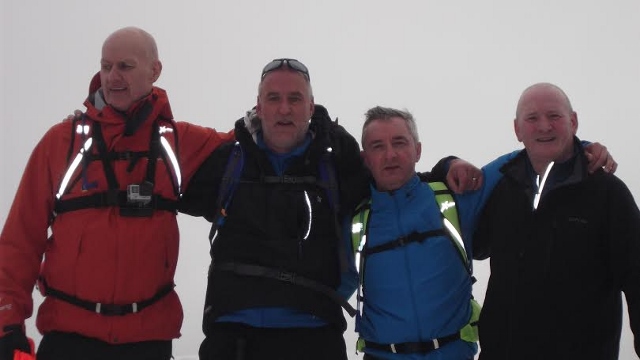 We hung around at the top for a while, we managed to get into the hut where we sat and had some food, all the time watching the skies above, so far the weather had been on our side, it was now late afternoon and the predicted storm had not yet appeared. Not wanting to risk it or push our luck we decided to make our way down. This was just as eventful as the route up as at one point we passed a hen party on there ascent where Chalky worked his way down them all giving out his finest kiss

I thought it was only the bride to be that got the kiss, Chalky was obviously feeling generous.
In no time we had passed the halfway Lochan again and both myself & Andy forged our way ahead to find a better place for all to cross the river, we managed this and got to the other side in time to set up the Camera and the GoPro just incase any of the team fell in on the crossing

Stuart arrived next and shouted ((((Andy)))) catch my sun glasses so that I don't lose them, he through them and Andy forgot how to work his hands palming them into the water like a good volley ball player Stuart Looking For His Sun Glasses

Marcus arrived next and his attempt at the crossing was nothing short of a stroll..... cold water was good on the feet
as for his Dad (Scott) well there's always one We arrived back at the car park in good time and the weather had been on our side all day, couldn't have asked for better, it even cleared for a bit on the summit to allow spectacular views all around, we pointed out the CMD & Arete which Me/Andy had done on an earlier climb on Nevis and I'm sure Marcus was planning a go before to long.
Our name "MunroMadMen" came about due to the group myself & Andy started climbing with what seems like ages ago however through time they have all fell away leaving us two to continue the name, now looks like we may have a good squad back again, Chalky & Stuart have already been out since and have been buying non stop (Mountain Equip) Marcus has been out a few times prior to and since our Nevis climb and Scott has already been in touch looking to do more climbs, things are looking pretty good for the "Mountain Men" a great day out with some good guys and brilliant craic.......