On Sunday morning it was another early start. Breakfasted and ready with the tents packed away we were on the road and heading to the Linn of Dee by 8am, a little later than planned, for my first bothy stay! With a stop for supplies in Perth, we got to the Linn of Dee car park by 12pm and, after organising all our gear which included tents in case the bothy was busy (and not forgetting some wine!), set off on the long walk in to the Corrour bothy. We felt we’d made the right call with the sun shining - although there were a few showers and the wind felt quite strong on the open path at times. Walk in to Corrour bothy Finally the bothy is in sight

By 3.30pm we were at the bothy and met the only other person who would use the bothy that night. Not wanting to waste a moment of the weekend, we ditched our stuff and set off to climb the three Munros behind the bothy; the Devils Point, Cairn Toul, and Sgor an Lochain Uaine. We were slightly distracted as we started the walk as the Mountain Rescue guys were out having a practice, dropping a flare, and landing near the bothy – nice to see them around. As the route description said it could be, the high corrie was blocked by snow, so out came the ice axes again for the ascent! It covered a much larger section than we had seen the previous day on the Buachaille, but it was relatively short-lived and we were soon on the wide bealach above the corrie which was more like a river, the ground was so flooded. On the way the path behind the bothy covered in snow

From the start of the ascent of Devil’s Peak I knew I was in trouble. I was off my game, my energy levels had tanked – I had doubts that I’d be up for the pull up the next two munros. The weather also got pretty miserable with cloud closing in and rain that became sleet that became hail as the wind got stronger. A voice inside my head was shouting ‘Seriously?! Its May!’ at the weather. The rest of the walk was probably the biggest mental challenge I’ve had in the hills, but luckily for me I was with a top notch company and their support got me round, making sure I got my summit pictures in and in good enough spirits to start talking about the next day’s walk as well! The boulderfield to the summit of Cairn Toul was challenging in the conditions but thankfully the terrain to Sgor an Lochain Uaine was easier going as promised. On the way back, I was feeling pretty wiped and was having real trouble taking a bearing which has really shown me how difficult simple things can be when you’ve run out of steam! We made our way back to the bealach below Sgor an Lochain Uaine, and contoured round Cairn Toul rather than ascend again. Back at the wide bealach above the bothy we now had to descend in the snow – plenty of pictures were taken for maximum dramatic effect and little impromptu ice axe arrest practice was had! Back at the bothy and I don’t think I’ve ever been happier to finish a walk. We got the dinner on and our new bothy mate joined us for some celebratory wine! The banter and storytelling went on for as long as we could keep our eyes open, but even ghost stories of the grey man of Ben MacDui couldn’t keep me awake. I usually don’t sleep well in unfamiliar places, but not that night! Far too soon I was waking up, ready to do it all again! 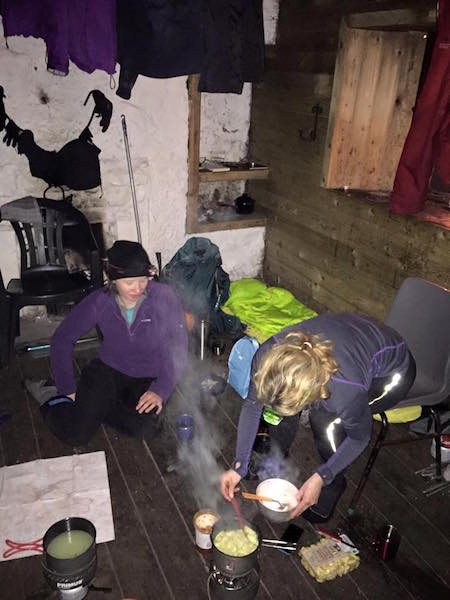 Dinner on the bothy

Another early start and we were organising our gear again. Lunches packed, water bottles filled, bags rearranged, and remaining kit in a corner of the bothy to be picked up on our way back. We set out starting along the Lairig Ghru and then following the Allt Clach nan Taillear route up to Ben Macdui. It was another beautiful sunny day in the Cairngorms. On the ascent we had great views over to the three munros we’d climbed only the evening before. Happily I was on better form. There’s more bouldery terrain to cross en route to the summit but this was easier going in nicer conditions, although still windy. I’m becoming more of a fan of boulders on the way up, still not big on them on the way down though! On the final ascent to the summit, the cloud closed in, and we walked on a bearing that took us to an old ruin, where we ditched the bags and made the short walk to the summit for another photo op. The vast expanse of the Ben Macdui plateau is an eerie place in clag, and a bearing was needed even for the short walk back to the ruin, which was now completely hidden, to collect our packs. Once we sheltered at the ruin, re-fuelled and had a quick cuppa, we walked back on a bearing to the top of the Allt Clach nan Taillear. We toyed with the idea of adding Cairn a’Mhaim but time was short so instead we retraced our steps back down to the Lairig Ghru and on to the bothy. As sods law would have it not long after leaving the summit it cleared again! The silver lining being that the weather was excellent on the long walk back to the car at the Linn of Dee. Tired feet made three hours feel like three days and as we got back to the car I was very nearly crawling! A quick rest and the sheer relief of putting trainers on and it was back in the car, driving to Edinburgh to drop the girls at the airport and then back up to Dundee to collapse in a heap. It was a challenging weekend, full of the happy kind of exhaustion that comes from big walks in good company! Where to next then?

Good job on doing an evening ascent. After a long drive and a long walk in, that's tough going.

And those angles! Bloody hell. Not a winter walker, so that looks terrifying to me.

Sheltered in the same ruins on top of Ben Macdui on the way to the summit and similarly couldn't find them on my way off. I'm sure someone moved it...

Great report! This sounds like such a fun trip!

Nice to see how you are enjoying the mountains

Have you just posted these this week? Great memories!! I'm about to write up our latest Cairngorms adventure - just a couple of weeks late! Great reports as usual

tombombadilio wrote:And those angles! Bloody hell. Not a winter walker, so that looks terrifying to me.

It wasn't as bad as it looks! Just being creative with the camera!

edinburgh36 wrote:Have you just posted these this week?

Yup - after our last Cairngorm and CMD trip it seemed a real shame to miss this one out! It's just taken me a really long time to get all my thoughts in order for this one! Still feel like it was a bit an epic