Some Donald-bothering in the Moffat Hills

Some Donald-bothering in the Moffat Hills


This was one of those hill days when the longer-range www.mwis.org.uk forecast looked promising, but then deteriorated rapidly at the last minute

... that rotten Atlantic Jetstream being to blame again, no doubt

. The Borders looked the best of a bad lot, so I thought I'd give the Munros a rest this time, and go for a day of Donald-bothering in the Moffat hills instead. The classic round of Loch Skeen, taking in the Corbett White Coomb plus two other Donalds, looked like a scenic option not far from Glasgow, so I decided to give that a go.

our_route.gpx Open full screen  NB: Walkhighlands is not responsible for the accuracy of gpx files in users posts
I didn't get a particularly early start however, and it was almost half ten before I got to the Grey Mare's Tail NTS car park. At least it wasn't raining yet! From the back of the car park, an excellent path (thanks once again to those NTS volunteers

!) rises up the side of Bran Law, becoming a stone staircase in its steeper sections, and giving tremendous views of the famous Grey Mare's Tail waterfall as it ascends. The distraction of the waterfall made the height gain remarkably painless, and soon enough the path started to level off along the east side of the Tail Burn, in a pleasant area of glacial drumlins just south of Loch Skeen. A wee bit further up, and Loch Skeen came suddenly into view - a real moment of revelation. Here's a pano shot: White Coomb over on the far left; the steep SE ridge of Firthybrig Head in the middle; and Lochcraig Head looking impressively craggy to the right at the head of the loch.

I followed the path for a couple of hundred metres round the east shore of the loch, then headed off-piste through the heather to follow a line of fencing that heads off north onto the eastern shoulder of Lochcraig Head. The fence definitely takes the easiest line up, but all the same it was difficult terrain at first, with a mixture of bog and tussocky heather. Once through the boggy bit, however, there was a fine view back down over the loch: A bit higher up, there was a nice vista over the hills out to the east: It's amazing what a difference a mere 20 metres or so can make to a view. From Lochcraig Head's summit cairn, the southern tip of Loch Skeen is only just visible. Walk just 20 metres south from the Donald to the edge of its southern crags, however, and this classic vista of Loch Skeen appears To make a bit more of a walk, I'd decided to take in the outlying Donald Top of Nickies Knowe, plus a third Donald in the area, Molls Cleuch Dod, which is again an outlier a bit further round the loop. Nickies Knowe was next up: it's the lump at the end of Lochcraig Head's north ridge. There was a handy line of fencing that I just followed all the way over. It proved to be a fairly scenic wee hill, with a good view over Talla Reservoir from its rather bijou cairn. I also got a good look at my next target, Molls Cleuch Dod. Sadly, history has not recorded exactly who Nickie and Moll were. Two keen Donald-bagging lassies of the eighteenth century, perhaps

?
Anyway, it was off back along the fence to Lochcraig Head, and then down westwards across the boggy bealach with Firthybrig Head. There was another pleasing view down over Loch Skeen from here. From here I detoured again, northwestwards this time, to take in Molls Cleuch Dod. This rounded Donald turns out to have two cairns, a big one beside the fence, and a smaller one a bit further east which I suspect marks the true summit. I made sure to visit both, and then stopped for lunch at the wee cairn. From here, I headed back to Firthybrig Head and then on southwest over the minor rise of Donald's Cleuch Head, which despite its name is strangely enough neither a Donald nor even a Donald Top

. There is an option of detouring from here to take in yet another Donald Top, which rather optimistically calls itself 'Great Hill'. Well, fair fa' its honest sonsie face and all that, but as my granny used to say, 'Self-praise is no honour', and I found it hard to enthuse. Particularly since it had started to rain quite heavily at this point ...So I decided to leave my life unenriched by Great Hill's charms, and plodded on southwards to Firthhope Rig, another Donald Top. There was an interesting view from its wee cairn to the craggy hills at the south-east end of the Hart Fell range. On the way across, I got a better look at those craggy southwestern outliers of Hart Fell, Raven Craig and Saddle Yoke. The low boggy area to the north-east of Saddle Yoke is rather pleasingly named 'Rotten Bottom' on the OS Landranger map It didn't take much longer to get up to White Coomb's sizeable summit cairn. The best views were probably back east to Lochcraig Head: From here I headed down southwest to take in one last Donald Top, the oddly named Carrifran Gans (answers on a postcard, anyone At this late stage in the day, the sun finally had the cheek to come out for ten minutes

. Here's the view back to White Coomb, this time bathed in sunlight: 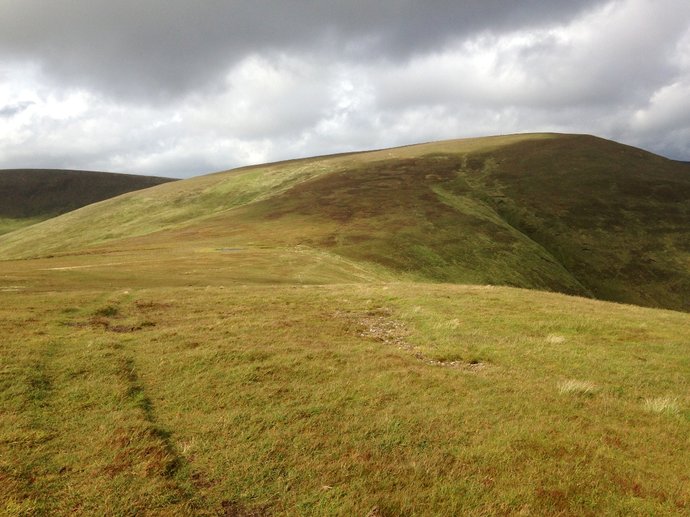 A view from Carrifran Gans' cairn: The descent route from here goes down Carrifran Gans' rollicking east ridge, following an ATV track right the way down to meet a forest track at the boundary of the conifers. The end of the track is at the middle of the three breaks in the trees visible in this photo (the leftwards one is the course of the burn that runs down from the Carrifran Gans / White Coomb bealach; the rightwards one is a forest ride that could be used as an alternative descent route). Anyway, I rollicked down the ridge for a bit until it started to steepen just before the forestry, then plodded down through the Christmas trees for what seemed an unfeasibly long time, before finally coming back out onto the A708. The only disadvantage of this route is that it then left me with a bit of a road walk back to the car park, but thankfully it didn't take too long

. All in all, a very scenic day's walking in these southern hills

Re: Some Donald-bothering in the Moffat Hills

Aye, that looks like a fine round indeed. I must make a point of bothering some more Donalds this coming winter!