After a good walk over the three Creag Meagaidh hills with no ill effects on my laughably rubbish knees, I was determined to get out again this weekend, with a bit of a free pass and a less-than-terrible weather forecast through the week.

Saturday's original plan was to head north to Sgor Gaoith and Mullach Clach a'Bhlair, however the forecast for the area took a nosedive, and the thought of plodding a few wet miles across the featureless Moine Mhor to get no views at all off Sgor Gaoithe didn't really fill me with any enthusiasm, so i gladly swerved this plan and shot a sunrise at Lunan Bay instead before spending the day dossing around and watching my football coupons fall apart before my eyes.

A much better forecast for Sunday, and as i couldn't really be a*sed spending 2-3 hours on a Sunday morning on the A9, I decided to head southish to Loch Earn for Ben Vorlich and Stuc a'Chroin, a couple of fairly easy to get to hills that i've somehow avoided until now. Still electing to leave home at a ridiculously early 5am, I got to Loch Earn's south shore at about 6:30am.

Learning from last weekend's faff versus midge disaster, I was ready to go almost immediately. The walk in is fairly easy, heading back over the burn and up towards Ardvorlich House, before turning left and starting to gain height through the woods towards the upper moor. The next field contained a massive number of fairly disgruntled sheep, clearly displeased that I was interrupting their eating of grass. However despite the smell created by wet sheep and all manner of animal droppings, the views back were slowly improving. Back down to Loch Earn

Once beyond the flock of future woollen products the track passes over a couple of stiles and the wood eventually throws you out at the Ardvorlich Hydro Scheme. Across the footbridge there's a great big boulder that I contemplated resting at for about 20 seconds until i was beset by midges. Moving swiftly on, there's a mostly fine path that heads through the moor, before eventually arriving at Sgiath nan Tarmachan, where good height is gained and the views again opened out. From here the ascent steepens and soon headed into the clag. Occasionally the imposing shape of Ben Vorlich could be seen looming through the mist. The final slopes are a steep, scree/boulder type affair. However, I made reasonable time up this and soon made the summit ridge, with it's Trig, massive old fence post and cairn along the way. The views from here are sensational. After a couple of slices of Soreen and a bogging Oat so Simple cereal bar, I debated the merits of heading back down, as the weather was crap, I had no views and my knee would inevitably be sore. Against that, however was my frankly misplaced faith that the clag would lift, the annoyance at my own laziness that rubbering SaC would bring and the fact that it was only about 10am. So i headed off down Vorlich's south ridge following a fairly obvious path, which degenerated to a quagmire at the first bealach, before improving up the rockier Creag Chasain.

It was now decision time. I didn't fancy trying The Prow, when i a) couldn't see it, and b) had slipped on greasy rocks on the way round. I therefore cut across the exit path (more on this joyous experience later), before crossing a stream and heading up the steep scree to the west of the prow. This was a bit of a slog, but i soon made the claggy summit area before plodding my way up to the summit cairn. Touched that then headed off to another nearby cairn to wolf down more Soreen and unpleasant cereal bar. Needless to say, the clag showed no signs of lifting. Didn't hang about long and said a quick hello to the only other walker I'd seen all day as he made his way to the top. I wasn't really fancying the descent as steep scree is really not fun. 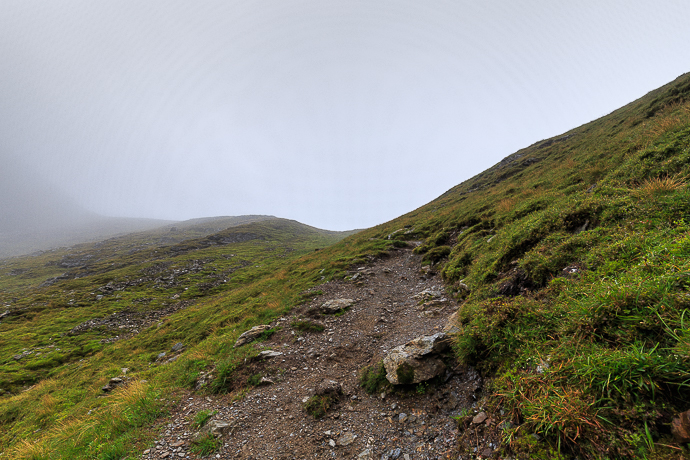 The scree path off SaC After a time consuming descent, I then followed what must be the boggiest path in christendom. A path so bad, it was surely pinched from Fionn Bheinn. My enjoyment of this bogtrot was hardly improved by the sight of both summits clearing SaC and "the prow" almost clear The path then swings round NE and gradually makes it's way towards the proper outward path. This stretch was an infuriating exercise in staying upright on a soaking wet side slope and i was absolutely delighted when it was over. All the remained was a quick walk back down the outward route to the car. The views were far better this time, with the Lawers Hills in view now also and some nice dramatic light and cloud. Loch Earn and the Lawers Range I got back to the car after about 6.5 hours, which was a fairly reasonable time, considering photo stops and time spent negotiating the atrocious bog trot from SaC to Sgiath nan Tarmachan. I'd certainly return to Vorlich, the views must be tremendous.

The only real downside to this area was the state of Loch Earn's south shore. Most passing places were parked in by overnight campers and the debris and rubbish left was ridiculous, the highlight being a stack of five disposable BBQs left sitting three feet from a bin. It's a real shame to see such a lovely area in a state like that.

Re: A Claggy Loch Earn Duo

Nice report JP. I seem to recall I found these two quite tough when I did them, particularly the return from SaC

Shame for you that the weather improved as you were returning off the two of them.

I was actually over in Glen Artney this afternoon, picking off the two northern Donalds. Had great views across to these two

Pulses of rain and cloud seemed to be hitting them throughout the afternoon. Thankfully I just got a few spits and spots on my hills......................unfortunately I got the peat hags of all peat hags too, which might actually make Fionn Bheinn seem like a tarmacked road

Re: A Claggy Loch Earn Duo

PeteR wrote:Nice report JP. I seem to recall I found these two quite tough when I did them, particularly the return from SaC

Shame for you that the weather improved as you were returning off the two of them.

I was actually over in Glen Artney this afternoon, picking off the two northern Donalds. Had great views across to these two

Pulses of rain and cloud seemed to be hitting them throughout the afternoon. Thankfully I just got a few spits and spots on my hills......................unfortunately I got the peat hags of all peat hags too, which might actually make Fionn Bheinn seem like a tarmacked road

Is that even possible?

The rain didn't come to much, not much more than a couple of spells of drizzle. Certainly not enough to motivate me to go to the faff of putting on waterproof trousers!