At the age of eleven some mates and I signed up for a week long school trip to Clachtoll campsite in North West Scotland. I payed my deposit and was all set! A few weeks before departure and much to my dismay, they all changed their minds, leaving me to endure this fate alone :/ The only compensation for this was that windsurfing was on the itinerary and therefore I supposed it would still be worth it.

I remember being reluctantly forced out of my damp tent every morning at 6am by a fog horn, huge washing up sessions in the freezing cold and trying to find a few accepting people to hang out with for the week.
However, I also remember the enchanting road down to the village, white sandy beaches, sitting on a cliff above the bay and learning that where we sat was once miles under the sea, abseiling down a waterfall into a cave at Inchnadamph and...............one atmospheric stormy evening gazing out to sea by the Stoerlight house where we heard the story of a large drug smuggling operation in which half a ton of Columbian cocaine, worth £100million, was smuggled into Ullapool on a fishing boat earlier that same year - 1994.
Looking back it was a pretty great holiday which filled me with enthusiasm for Scotland and wild places. I have always wanted to go back and rediscover this part of Assynt.

In March this year we were typically disorganized with no plans for our week off and on top of this I had some 'big life decisions' to make - never fun! On a last minute whim we hired a discounted cottage in NW Scotland and two days later we were off. Looking at the map, I spotted Clachtoll campsite and then realized that our cottage was less than two miles down the road. It must have been fate!
I hoped that my memories had not set me up for disappointment all these the years. We arrived in the dark and woke to the magical place I remembered.

Despite the time of year we fancied at least one mountain day & Alistair had his eye on Quinag and Suilven.
I knew of them well. But I got a bit terrified after reading about the steep descents and scrambles, especially with the added prospect of snow and ice. So we decided to leave those bad boys for another day!
As a compromise Cul Mor looked good and there wasn't really anything to put me off this one. Except that we couldn't see the mountains from our cottage, so Spring conditions were a bit of an unknown quantity.

The day came and we were up and out the door by 6am to make the most of the precious light. I felt pretty apprehensive when we saw Cul Mor before us covered in snow, but even despite this it was a beautiful sight. As we got further up the hill the mist was blowing in and out making visibility poor. I always look out for human foot prints, but I did not see any.
Instead we saw these large prints running ahead of us for a quite a long way. I started imagining that they might belong to a panther or something equally ridiculous.............memories of the prowling 'beast of bodmin' ran in and out of my mind! It was a bit eerie.
Now with rational thought I assume they were mountain hares. But here next to Alistairs boot (size 15) you can appreciate that they were quite big!! Never did see the owner, though I have a feeling they saw us Big foot print eerie as the mist came in and out Looking up at the route towards the first summit, the boulder field can be seen at the top

The day began clearing up and it was an obvious line up towards the first summit. The slope was a bit intimidating to me as not used to walking on snow. I relied on Alistairs assurances that I could do it to inch my way up towards the boulder field. My main worry was that there would be more difficult ground further up. Trepidation and uncertainty, NO happy

On reaching the boulder field I felt more secure, especially because the boulders were very large. It was quite hard going due to their size and the snow

I don't think it was hard or dangerous but being on snow made me feel Less confident. We made it to the top and I was very chuffed with this. Especially as from here I could see that it was a wide, flat and unintimidating plateau, not to mention beautiful! Walking along with a spring in my step Alistair looking out along the plateau 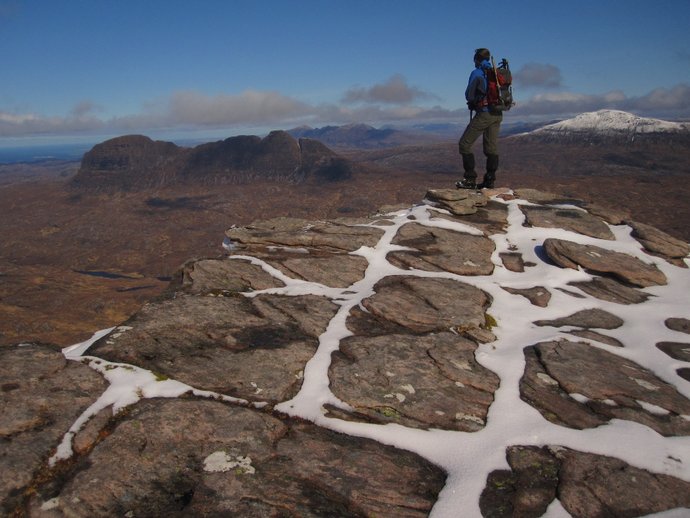 A trellis pattern up high Not a bad rest stop Looking back at where we had walked from Lots of lochs and lochans

Following a view stop we wondered out across the undisturbed snow towards the summit of Creag nan Calman. Here I stopped for lunch on a large boulder in the col above the descent route and Alistair went up to the summit. By this point I had had enough adrenaline for one day, so I sat and admired the beauty of the place. Two bright white snow buntings (the first I have ever seen) came down for a fleeting nosy. They were clearly scouting after crumbs and I tried to entice them back, but maybe my sarnie wasn't to their taste. Setting off towards the pyramidal summit of Creag nan Calman. The path down from the col was nice and easy. Back down amid the spring colours, knockan crag in the background Over 420 million years of history on the side of the road!

Cul Mor has opened my eyes to the adventure and beauty of Winter/Spring walking and increased my confidence a 'tiny' bit more.
Report is a bit late coming but as I am resting my ankle it was a good time to get round it. If anyone is interested in doing a winter walk up in this part of Scotland then this is a relatively straightforward one and you will be rewarded with really spectacular views and perhaps a snow bunting wearing its winter coat.

Definately my favourite Corbett so far, but then that is not saying much

Lovely report and a fine area too.

Thank for the memories!!

That got the appetite chomping for winter. For me this has to be my favourite area, it is breathtaking. Wonderful photos, few more months...cant wait

Nice report! Great wee hill, isn't it? We often spend New Year in Ullapool and have done it several times in winter, but have never had as nice a day as you did!

I think the footprints probably are a mountain hare, and they just look big because of the way the snow has cracked around them. You can definitely make out claw marks, though, so the only other likely candidate is a fox.

Glad the pics brought back some nice memories larry groo

We saw a lot of wildlife when we were there including an otter in the sea.

It is an amazing place, think it has just over taken Wester Ross as my favourite too now Spiderweb! Definately looking forward more winter walks on days like this!

Great place for new years, hopefully you will get a brilliant day this year! Think your right about hare, fox I hadn;'t thought of, that is interesting

Beautiful. I so love this part of the world, and return as often as I can, but have never seen it in winter garb. I've been there in winter a few times, but it was always just wet and grey!

Great report and fantastic photos. Have done it twice, and it is a true gem of a wee mountain!

This was the one non grey day we had that week

Did not really expect snow at end of March, and some of the hills had none at all which was odd. Hope you find some next time

Definitely a gem, especially because it was easy to go up in winter like this. Where as a lot of the others around there would be pretty terrifying in snow I think

Bean wrote:This was the one non grey day we had that week

Did not really expect snow at end of March, and some of the hills had none at all which was odd. Hope you find some next time

Definitely a gem, especially because it was easy to go up in winter like this. Where as a lot of the others around there would be pretty terrifying in snow I think

To be honest, I think March is arguably one of the month you're most likely to find snow in recent years! Though not so much in the Assynt area.

I can't moan too much, my last couple of trips (spring) have had wonderful weather (some days!).