42 people think this report is great. Register or Login free to be able to rate and comment on reports (as well as access 1:25000 mapping).


This journey started some 37 years ago in the late 70’s. Living and working in London at the time my early interest in walking was inspired from those early books such as The Big Walks, Classic Walks and Wild Walks, large format with stunning photographs, all purchased from the YHA shop just off The Strand and still on my bookshelf with somany others.

My early walking was to the Lakes, Snowdonia and South Wales, mountains were my ‘thing’ even then. I did many of the long distance footpaths too, but those books would have me longing for the Highlands and the first forays north were to the classic ridges on Arran, then to the Aonach Eagach, but much else was too far for this Englishman.

My first ever trip north was to the Arrochar Alps and the Cobbler and the Ring of Steall, my first Munros in the latter.

Some years later by which time a regular weekend was enjoyed in Scotland yearly I bought a Munro Log book, I had done around 30, such a long way to go.

I didn’t realise I’d begun this journey back in the 70’s, and as the yearly trips advanced, still had little hope I would ever finish it. But those first trips would not be the last, they would be the first of many.

In those more recent years of my regular walking companions succumbed to illness, they would sadly not be around to see me ‘compleat’ and I remember them well, stopping at the Commando memorial whenever I pass, to remember one, for he gave his service. Miss Me But Let Me Go, the poem at his funeral.

I passed the usual milestones in numbers but by the time I hit 100 I had moved to Scotland.

But that journey I never even knew I had started, would become a journey that would not end. My last mountain wasn’t ready for me, and nor I for her

So no compleation for me, one remains

I climbed Sgurr Dubh Mor on Skye today, thinking back over all those years and how quickly they had passed. More time had gone than would be left, that’s for sure, life is so short and more so when we walk amongst the mountains, that have stood for millennia. As too have the stars, with my interest in astronomy, the Andromeda Galaxy, most distant object visible to the naked eye, a mere 14,696,249,500,000,000,000 miles away (had to look that up), 2.5 million light years, so what we see of it now happened that long ago, we pale into insignificance. It all makes me feel so small, and that what we do in life matters not, all will be forgotten, the stars and the mountains will remain. I only wish my telescope was portable for hills

Climbing mountains opens your heart too and sometimes life would be so much easier if we could also close it, as with our eyes (did that a few times today jeez

), but we cannot, we live with our emotions, we cannot suppress them, or magic them up. There have been joys too great to be described in words, and there have been grief’s upon which I have not dared to dwell. Well said that man

So I climbed Sgurr Dubh Mor today, alone but not alone, as I reflected back over those years to my mum and dad, family and friends, some old, some new. Also my dog Holly, she would have been here today, her paws on the gabbro for one day, wagging her entire body as she did, having so little tail, regardless of the mood of the weather or mine. Resting her head on my legs at lunch stops looking me in the eyes, I couldn’t not smile, true love

So the impossible dream, to follow that star, no matter how hopeless, no matter how far, were apt lyrics for today, as I left Glen Brittle for Coire Ghrunnda, a battlefield of rocks, and on up to Sgurr Dubh Mor. A landscape created by immense forces, someone had indeed moved heaven and earth.

On the drive in I stopped at Sligachan, Gillean was looking sublime with lenticular clouds forming. 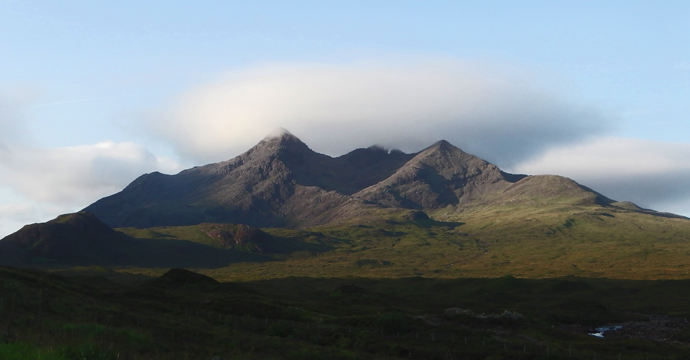 I’d packed the usual stuff, sarnies, flask, Curly Wurly and a couple of slings with a piece of old string just in cases. It was a fresh start, forecast was for coastal areas to have cloud fairly low, but that was wrong for starters.
First stop of many today was on route into Coire Ghrunnda, the Rab still on although it was warming up as the sun reached height enough to clear the bulk of Sgurr nan Eag. Rhum in the distance. 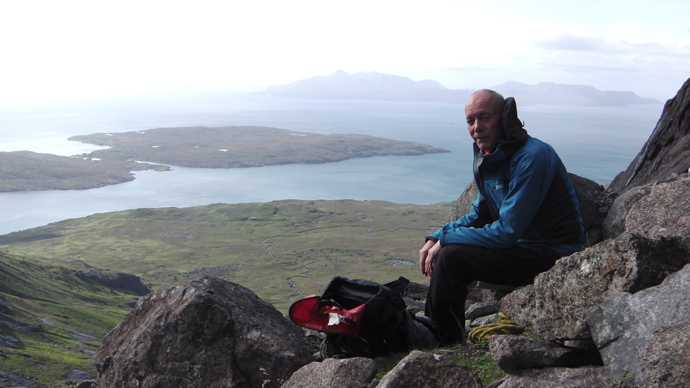 Last time I climbed up to this coire was the year of the storms on the west coast, maybe 4 or 5 years back. We got soaked climbing up as the burn that flows down over the slabs was being blown up and all over the place. Once atop the crest for Sgurr nan Eag it took me 10 minutes to reach my pals due to the high winds, and as a result Sgurr Dubh Mor had to be left for another day. So it was wonderful to be back in such weather, the wind which was present down at sea level had gone in the corrie, it was all looking rather good. 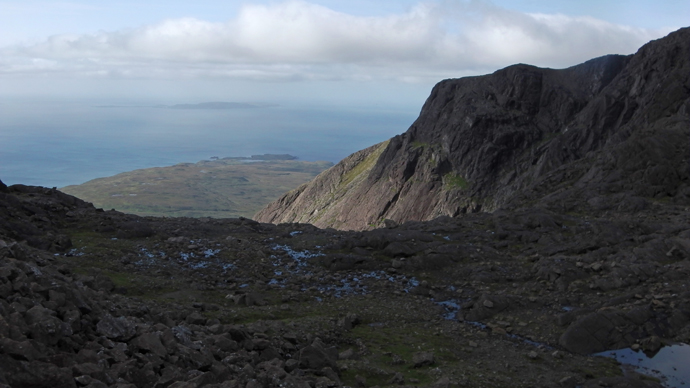 Various options to climb up to the Casteil, but I went up the right side of it and popped out on the crest to the magnificent view down to Loch Coruisk with Bla Bheinn beyond. 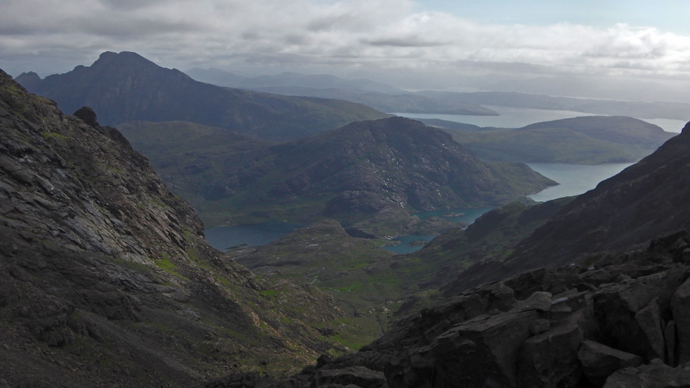 Also my first glimpse of Sgurr Dubh Mor, it’s the one to the right with the wee dimple on top jeez ! 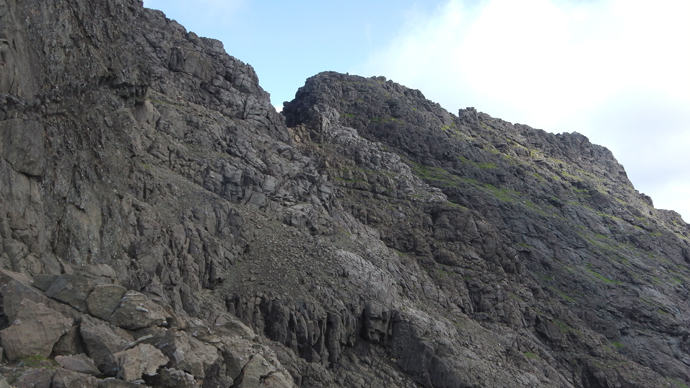 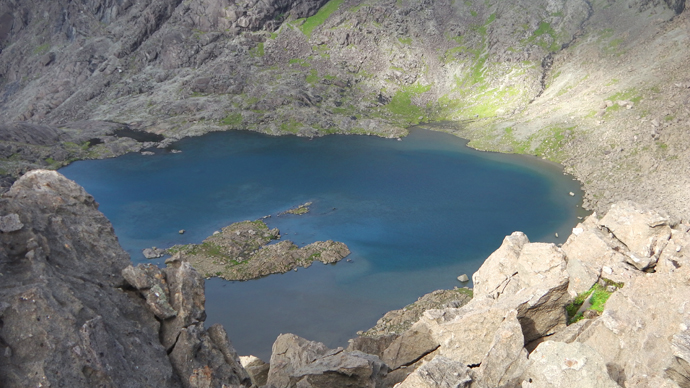 I passed the right side of the Casteil and began the ascent of Sgurr Dubh a da Bheinn, a formidable obstacle but once on the route it’s a case of picking your way up and wherever possible taking a line back to the crest. Up until this point I had an eagle for company way above, wings seemed to be much larger than previous sitings so I guess it may have been a sea eagle. But the rest of the world had started to wake up, folk on ascent of Sgurr Alisdair having passed the ‘mauvais pas’ in the dip and some to the left about to meet the same obstacle. 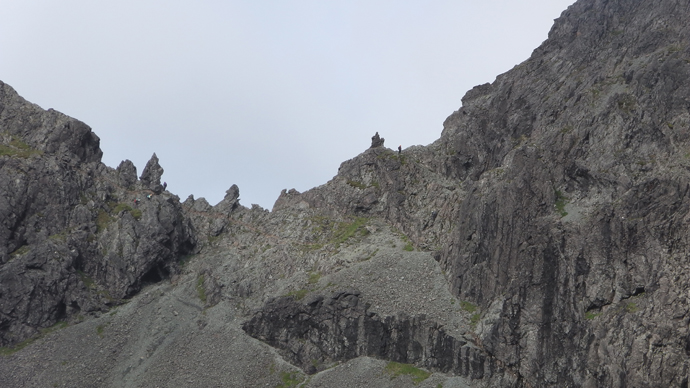 Summit of Sgurr Dubh a da Bheinn with Sgurr Dubh Mor behind, you sure about this ? 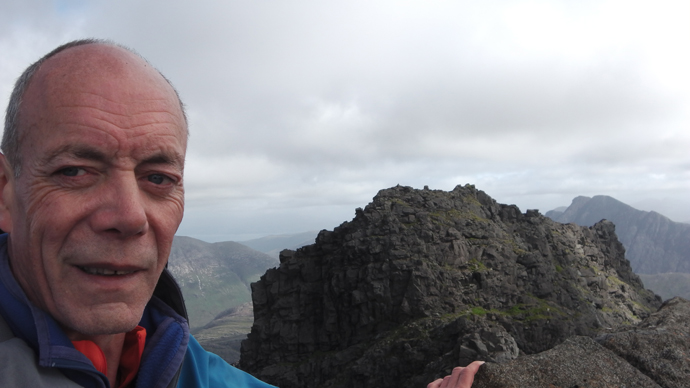 And the view back down the route of ascent from the Casteil which looks a tad smaller now. Descent of Sgurr Dubh a da Bheinn is needed to reach the col at the base of Sgurr Dubh Mor, but its not a case of just walking across, it involves some descent down and back up a groove to reach the start of the ascent effectively bypassing to the right and below of the huge chunk directly ahead. Place looks a mess 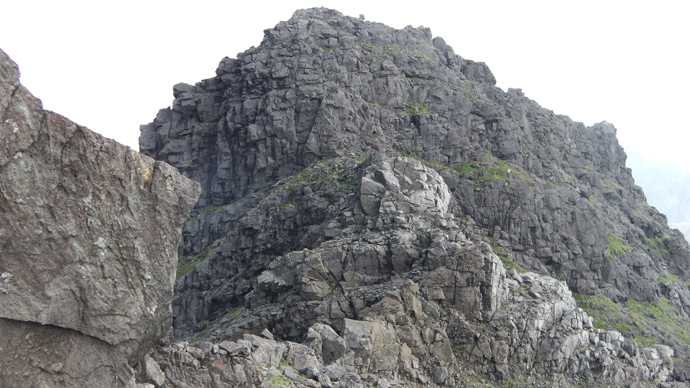 The route up from about half way, starts about 20 paces from the col then up, couple of slabs and a wee gap to negotiate, this shot from above the first slab bottom right in the pic, the rest, jeez, you work it out 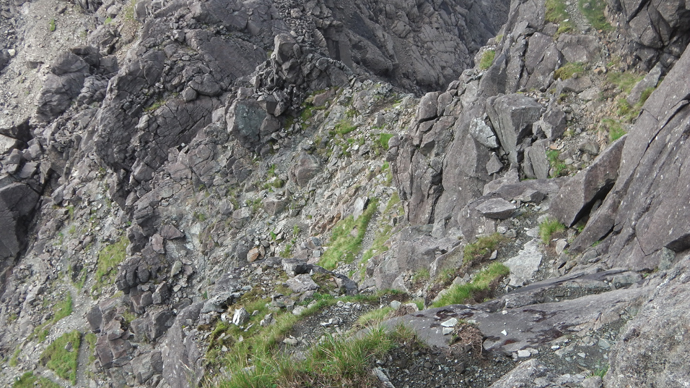 But made it, with Sgurr nan Eag’s slabs glistening in the sun. 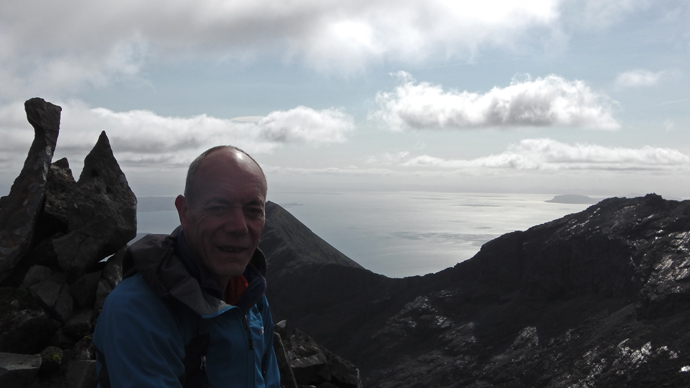 About the same time as folks that had ascended Alisdair made their way across the top of the Stone Shute and over Sgurr Thearlaich. 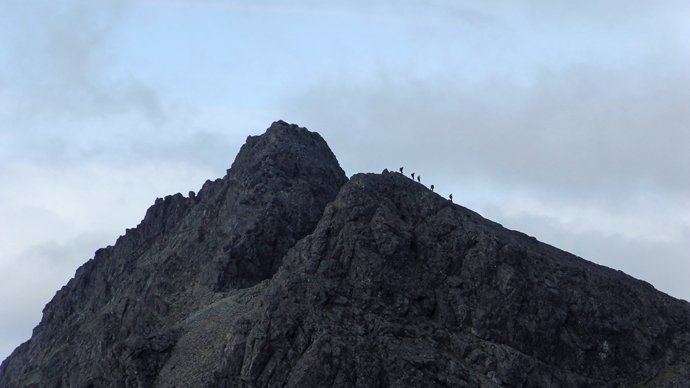 The summit of Sgur Dubh Mor is not the largest but I stayed for a good while taking in the vista of the whole of the Skye ridge.
Alisdair, Mhic Choinnich, the Inn Pinn and beyond. 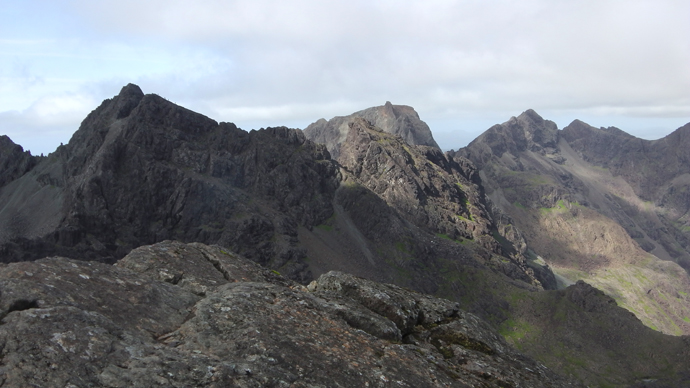 Sgur nan Eag and the superb ridge out to Gars bheinn. 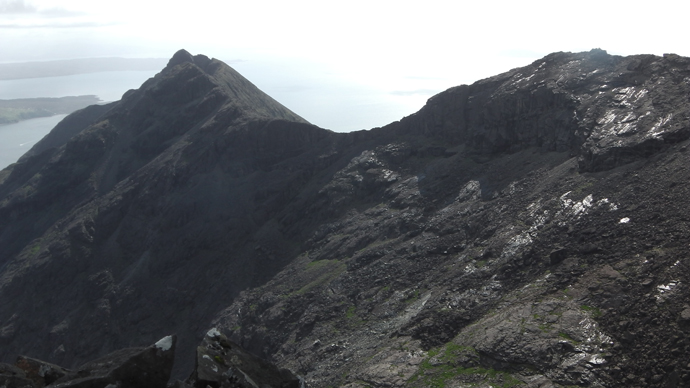 The Inn Pinn zoomed, straight across the top of Sgurr Mhic Choinnich 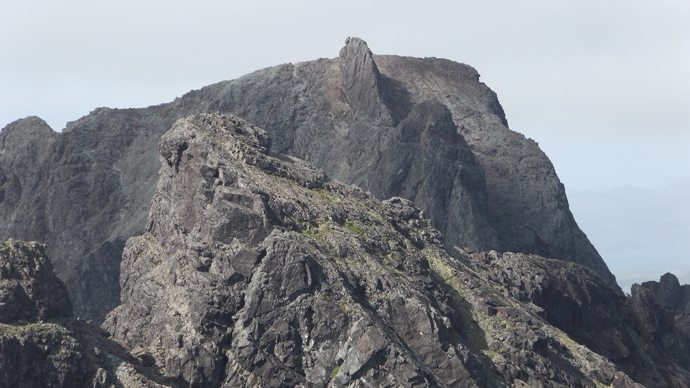 But time doesn’t wait, so back down it is, not the place to slip that’s for sure. 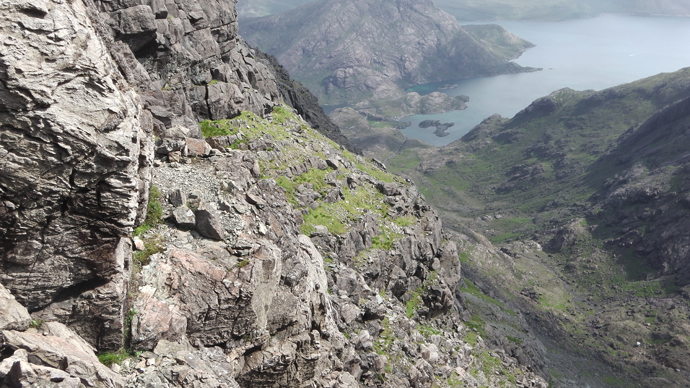 Slightly chuffed but sadness too today, emotions were running high 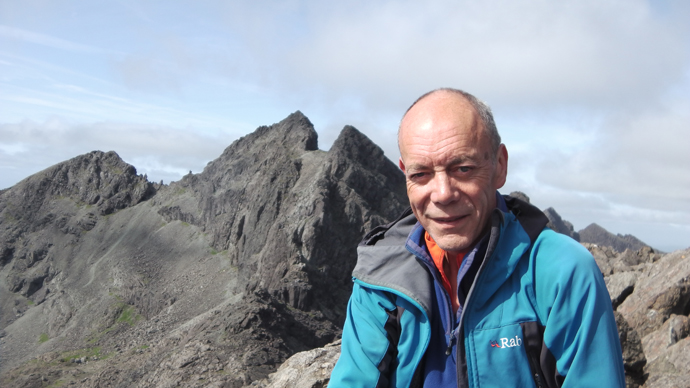 Near the base of Sgurr Dubh a da Bheinn the first folks I’d seen on the hill, Paddy taking up a group, he remembered the Macbeans, with a little prompting. Probably speechless from meeting Spiderwebb.
I descended direct before the Casteil to take a tour of the other end of the Loch, straight down. 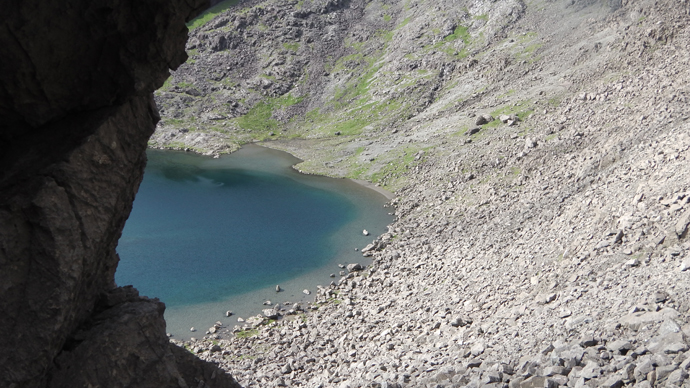 Where I had the beach to meself 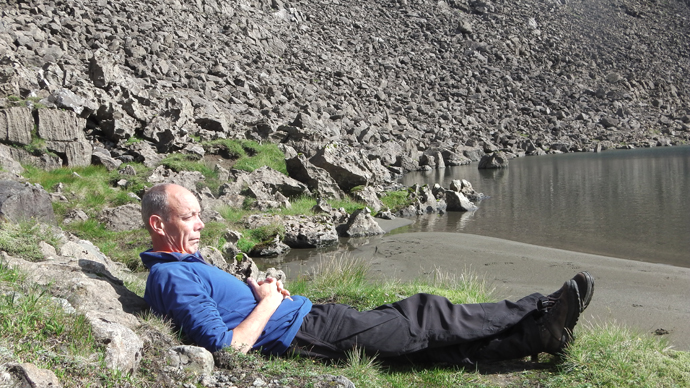 Last look up at Sgurr Dubh a da Bheinn as Paddy and his troops reached the summit. Congratulations or perhaps commiserations, well you know what I mean.

What a great read!

A good read with great pics. Congratulations on completing the Munros. Still lots of hills out there and nothing to stop you doing any or all of the Munros again. It doesn't have to be Journey's End, just the end of Chapter 1.

Weather looks much better than was forecast

Many many kilometres and several pairs of boots I'm sure

Now you will be climbing and reporting just for fun

Thank you for your comments but not there yet

A big lump in my throat reading that Dave - bloody wonderful!!!!

Well done. Are you going to do the last one?

Me to writing it Polly

Sunset tripper wrote:Well done. Are you going to do the last one?

No plans for it now Sunset Tripper

So true Petr, may thanks

Brilliant report spiderwebb - so many emotions

A lump in my throat too reading that Dave

Lovely read that completely sums up life, we can only but play the cards we are dealt, sometimes we gamble and lose and sometimes we go with the dead Certs and end up wishing we'd gambled

All the best my friend

We shall have to compile a list of favourite days to revisit.

In the meantime, congratulations on almost spinning the unspinnable web...

congratulations on the compleat SW


and a fine piece of writing and reflection, got me thinking and remembering too....

Top
42 people think this report is great. Register or Login free to be able to rate and comment on reports (as well as access 1:25000 mapping).