The WH route isn't what I would call a beaten track on the way up to Beinn Tulaichean, but the views are great from very early on.

Got to the car park expecting it to be full on a nice sunny day, but there were still a few places left, walked along the track to the farm across the bridge 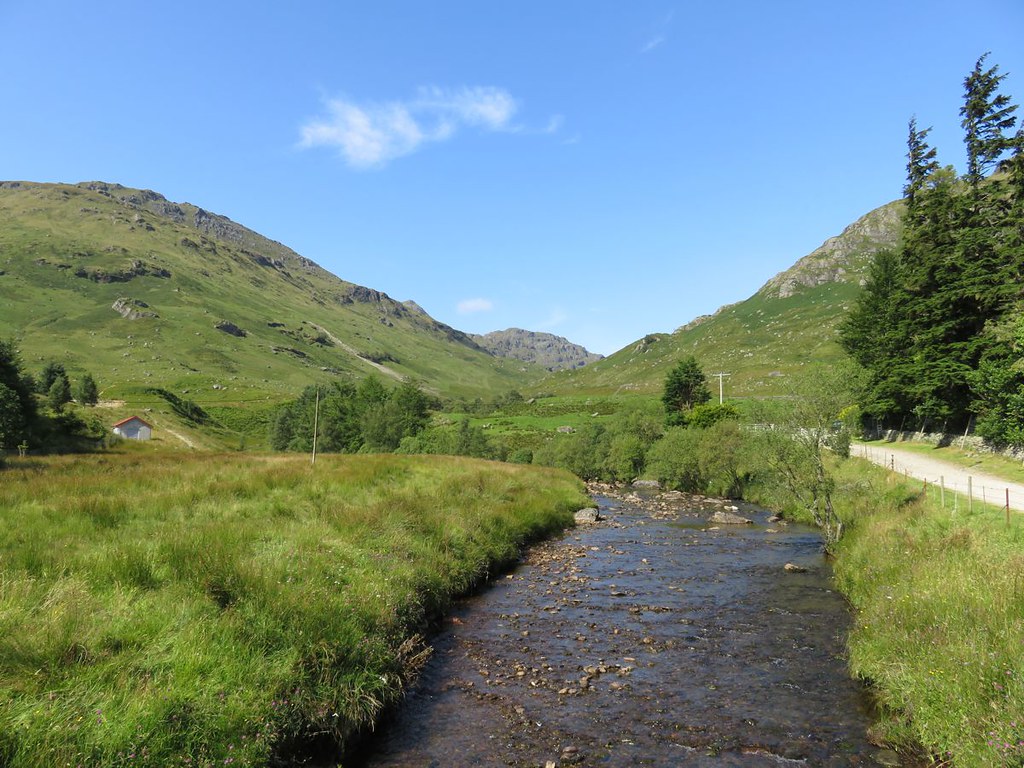 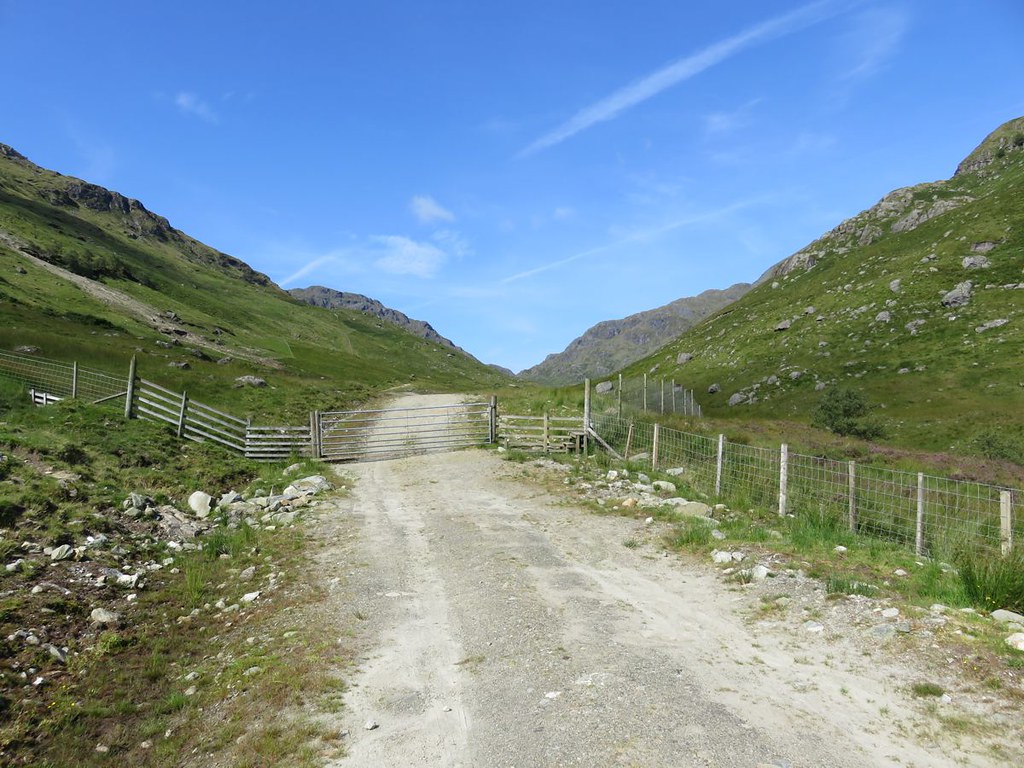 The walk up was steep 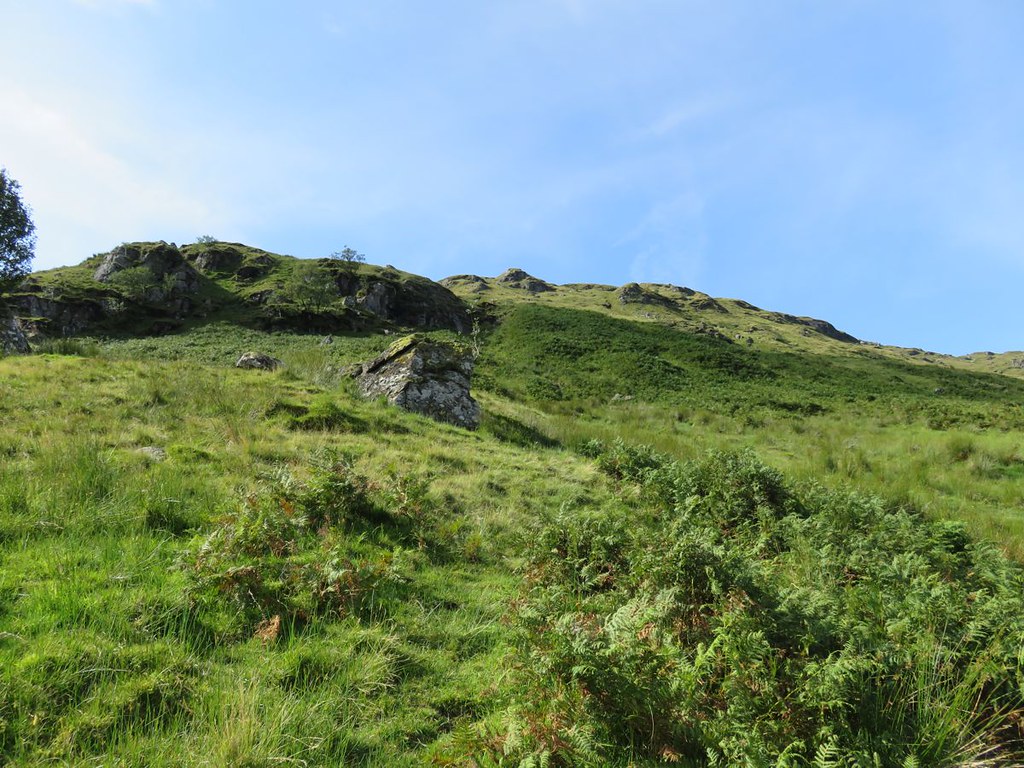 but views down Loch Doine and Voil were enough recompense 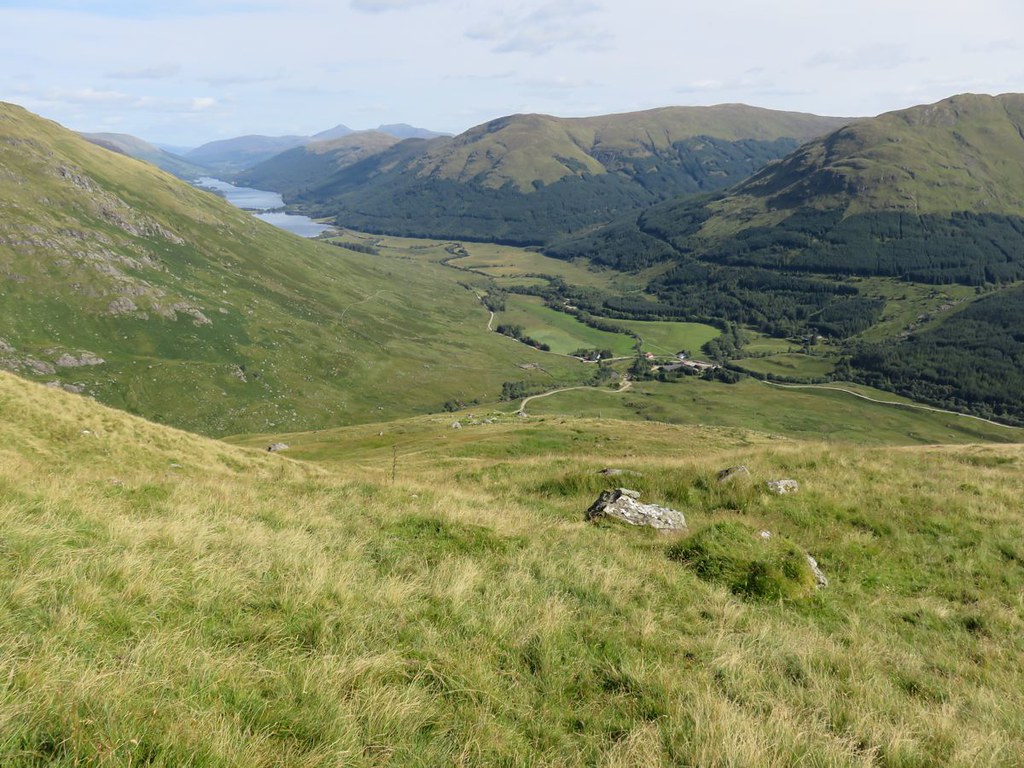 It's possible that I was a few metres too far North as on looking back down I saw a gate along the fence I'd climbed over. 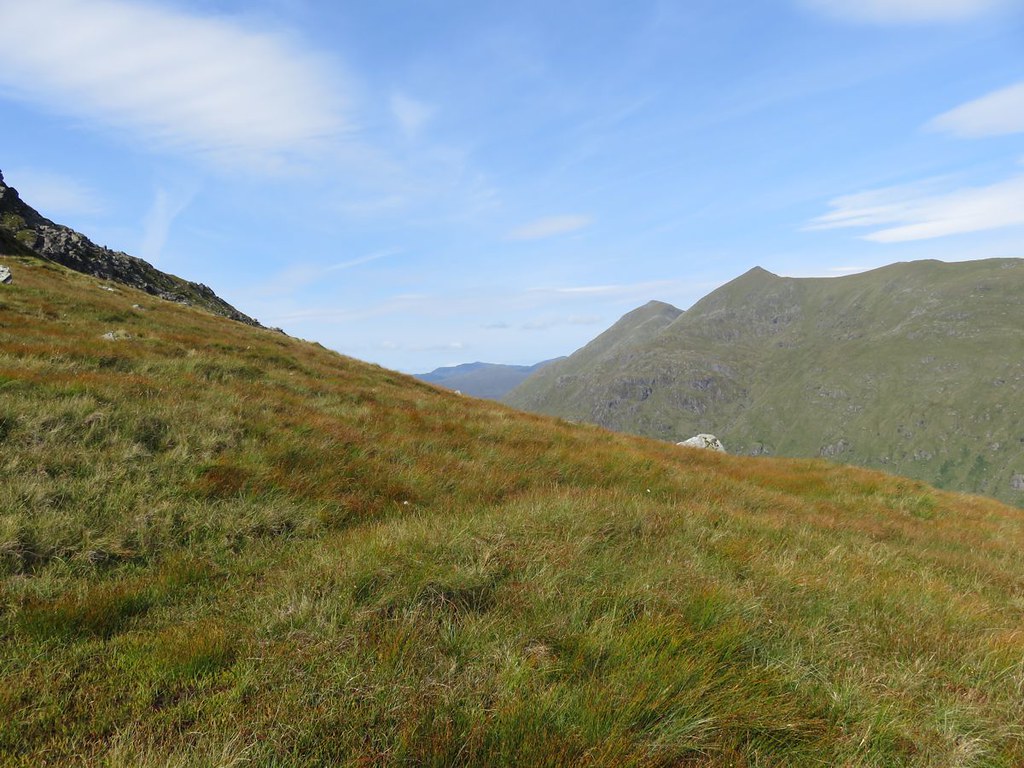 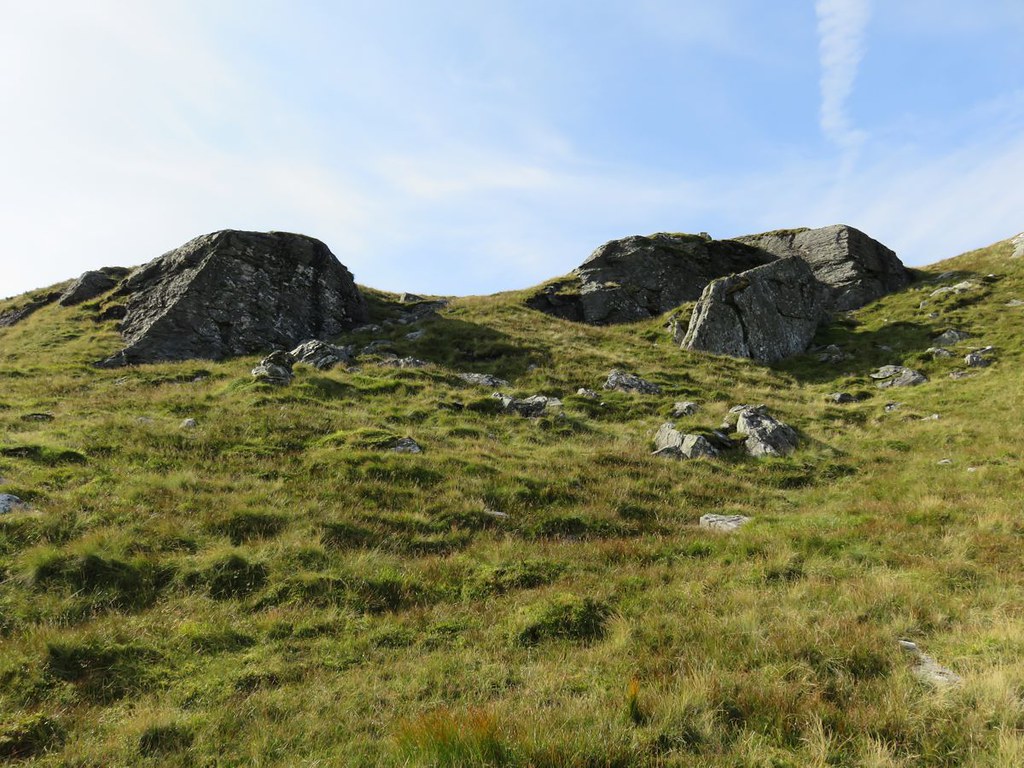 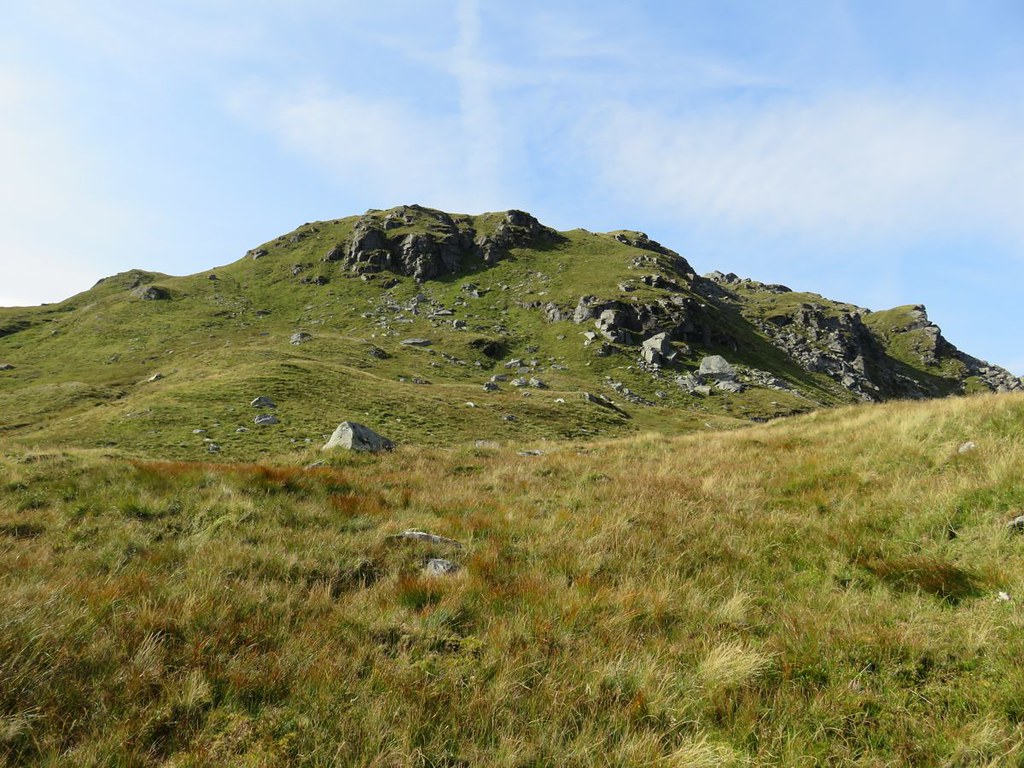 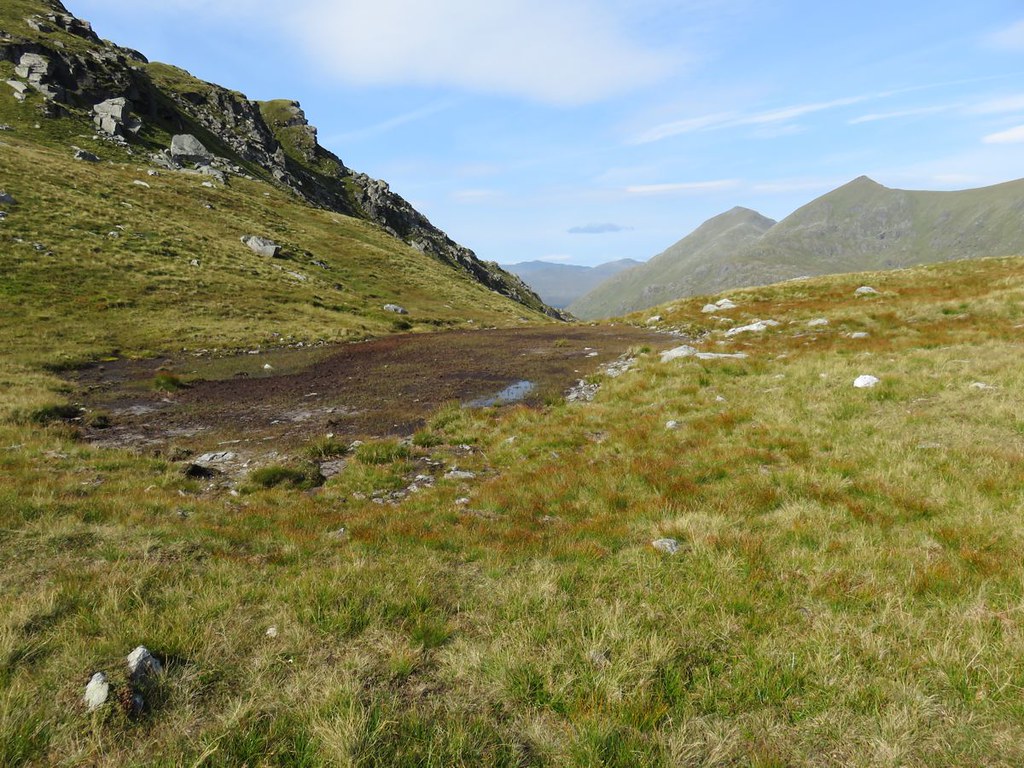 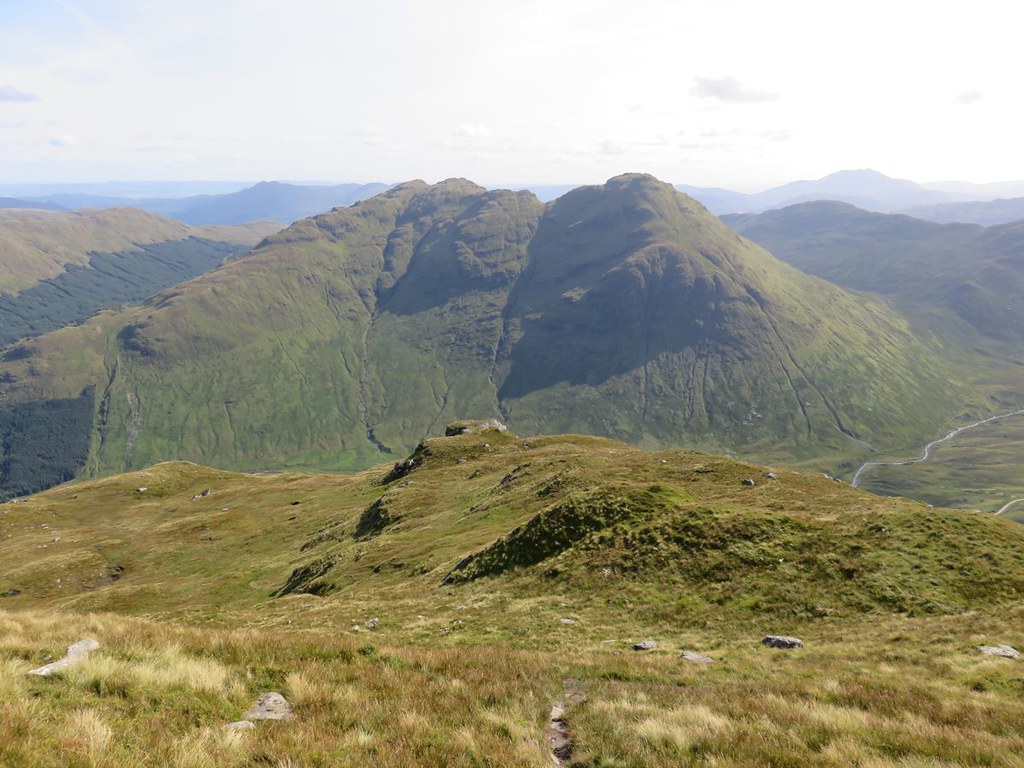 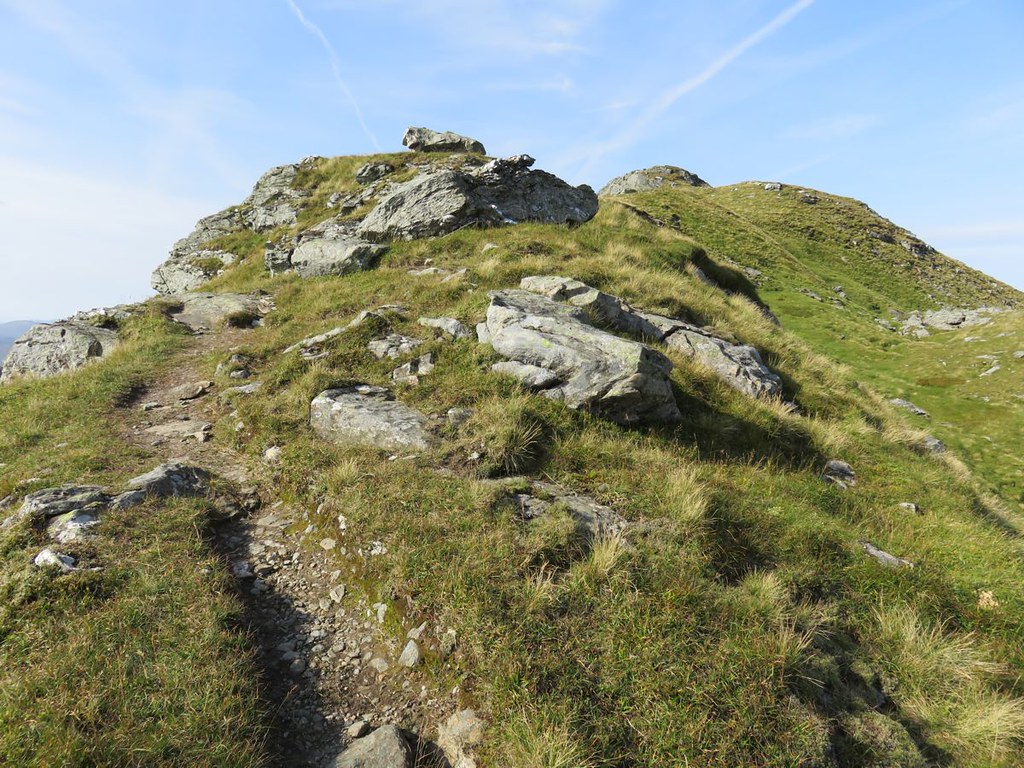 and once on the summit the views were panoramic, first class and very bobbly

This view towards Beinn a'Chroin and An Caisteal 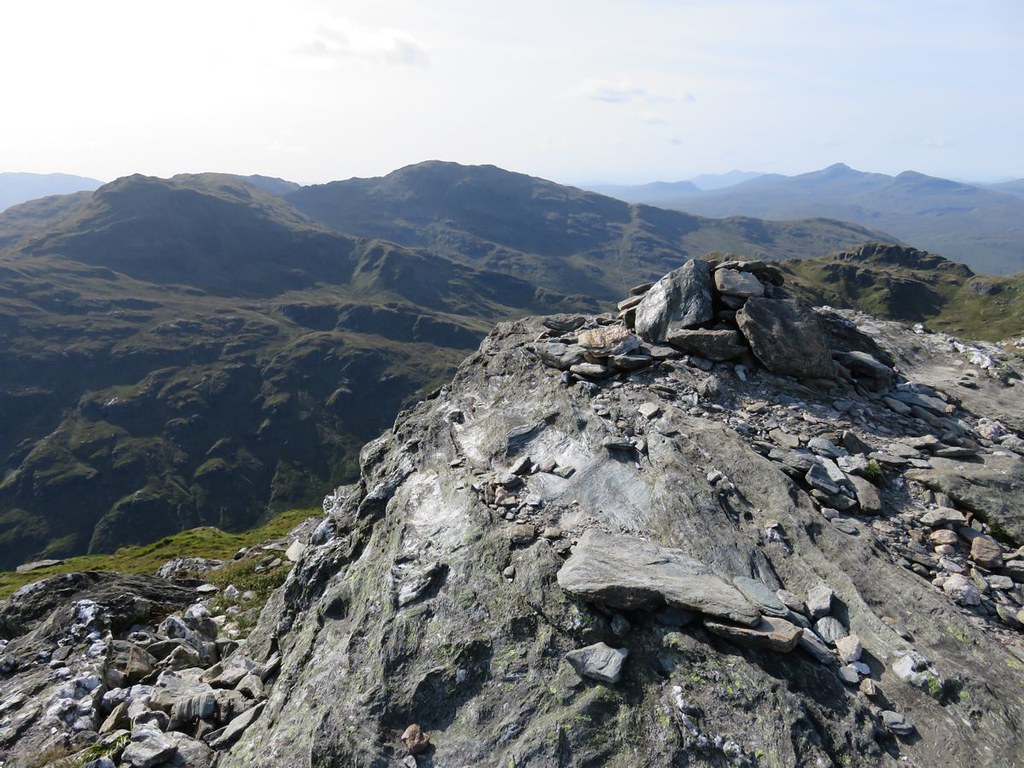 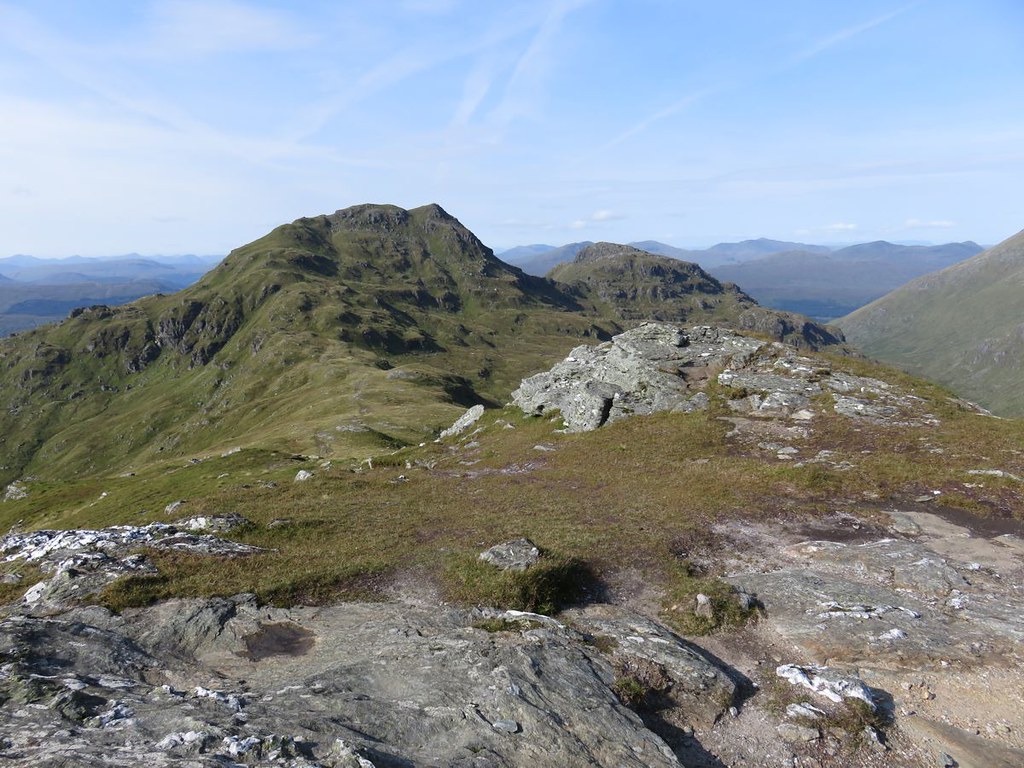 There's an interesting and well defined path.
Although it was forecast to be a bit windy, on the way down to the bealach it was calm and I could clearly hear distant voices, I scanned the track ahead and they were actually a long way off although they sounded nearer. A group of four with a dog making their way purposefully down to the col from Cruach Ardrain, we sighted each other just before I reached the bottom of the bealach and semaphored, i.e. I raised a walking pole to acknowledge their existence and they did likewise. They continued off down to my right in the direction of the Inverlochlarig burn with what looked like unstoppable determination, four in line at pace

I continued on up to Cruach Ardrain summit watching and listening to some small song birds, but every time I got the camera out they would fly off.
No matter, it's a nice day and views are fab, looking back to Beinn Tulaichean 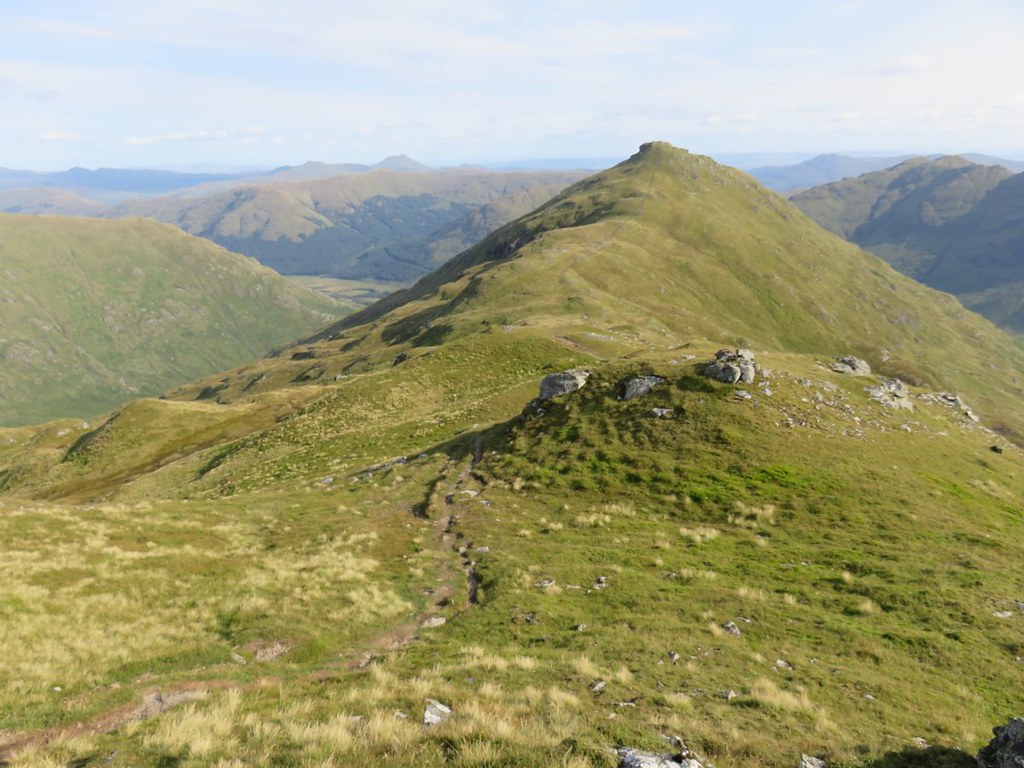 A drumlin this high up on the side of a mountain

Met another walker just before the turn towards the summit, exchanged pleasantries and carried on. Round the corner in sight of the summit and there are four Ravens enjoying the updraft, one landed next to the cairn, but the camera didn't focus, and no decent photos. I've always liked crows, even the name rings with me, so would be great to get a really good photo of a Raven. Think when I get up the next mountain with cliffs and crags; suitable habitat for Ravens, I will take some mince and set up a camera trap.

Views from the summit are excellent 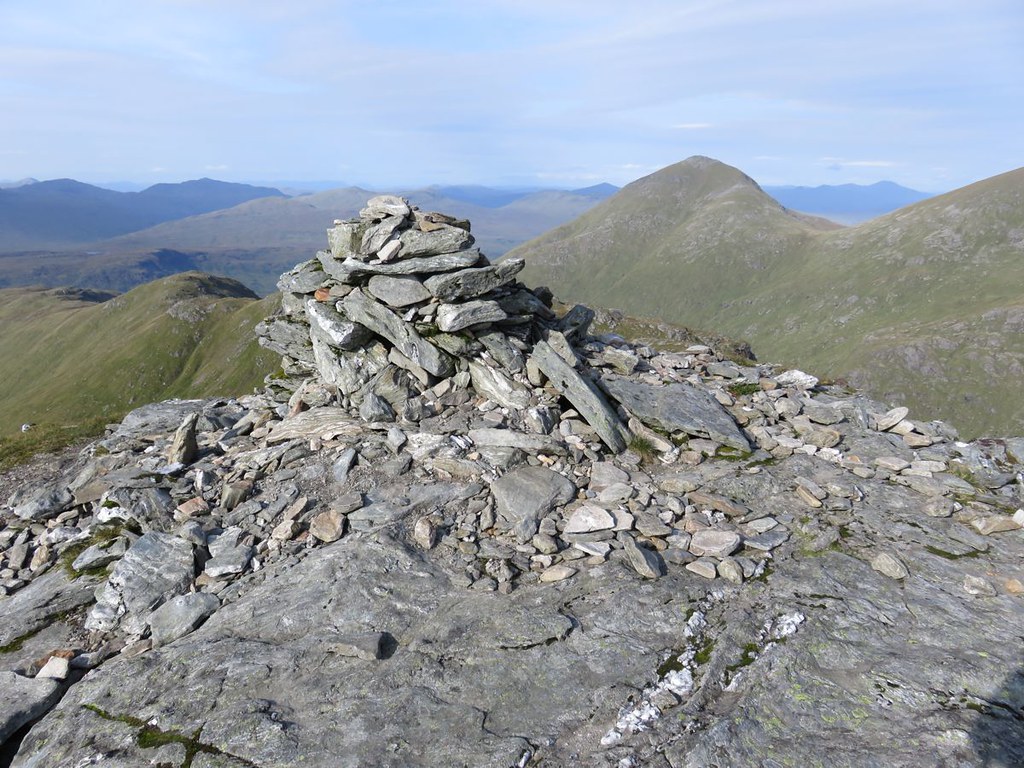 and it also has a nice ledge where it's easy to sit with the rucksack still on and wait for the Ravens to come back. One did return and glided round, but then off to the west and that was that. Back across the wee gully which separates the actual summit and the song birds are teasing again. Chirping away and making their presence and whereabouts know, but as soon as I point the camera in their direction they are off

Got down to the col and and exited down. There's a small cairn which marks the path although it isn't that well defined and I'm sure I made it up as I went along for several sections.
What wasn't in dispute was the beauty and interesting landscape of Corie Dubh. It was so peaceful, I stopped every now and then to listen to the silent, fabulous.
An early view towards Ben More and Stob Binnein from the top of the Corie 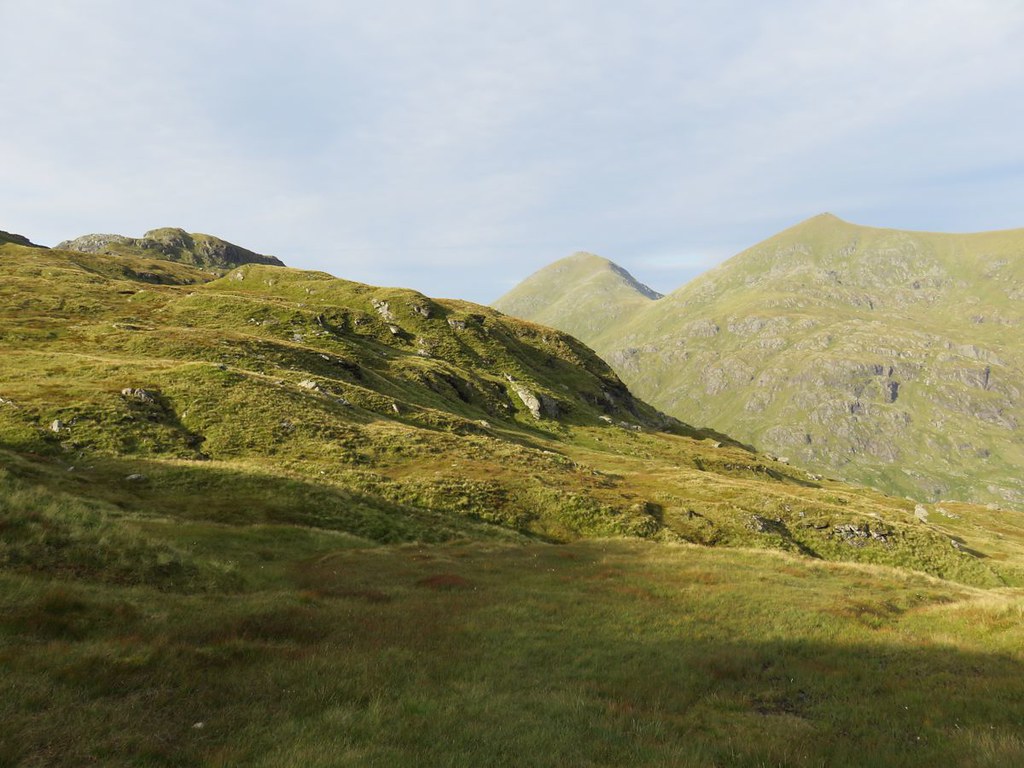 The path follows a stream down. The stream ran the whole way down on an extended slab, perhaps there isn't that much depth of vegetation on top of the rock around here

certainly not much in the way of loose rocks and rubble in the stream.
A view of the stream, looking up to the summit of Cruach Ardrain 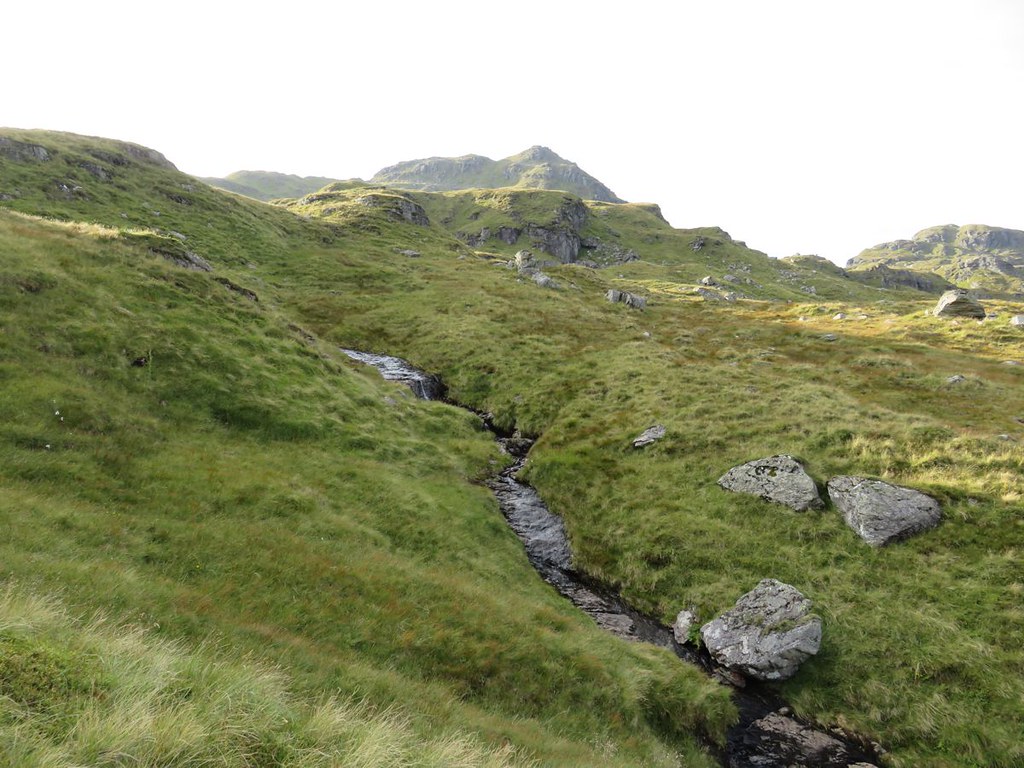 Eventually I get my photo of the song bird, a meadow pipit. I guess all of this years young are now up and around and that's why there are so many of them about. A bit far away, but good enough for identification 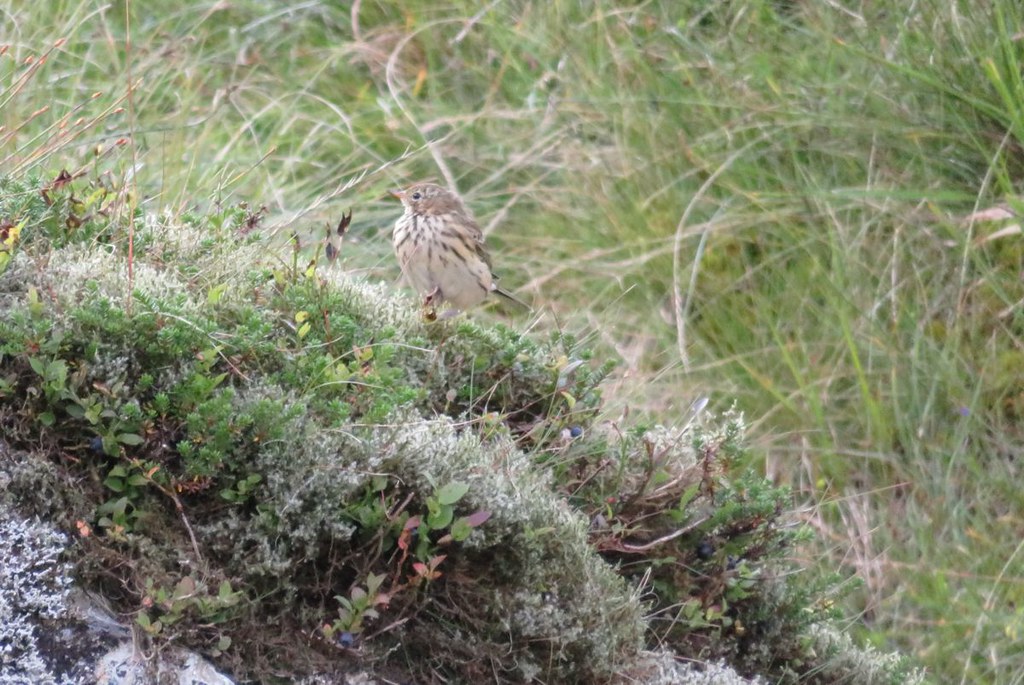 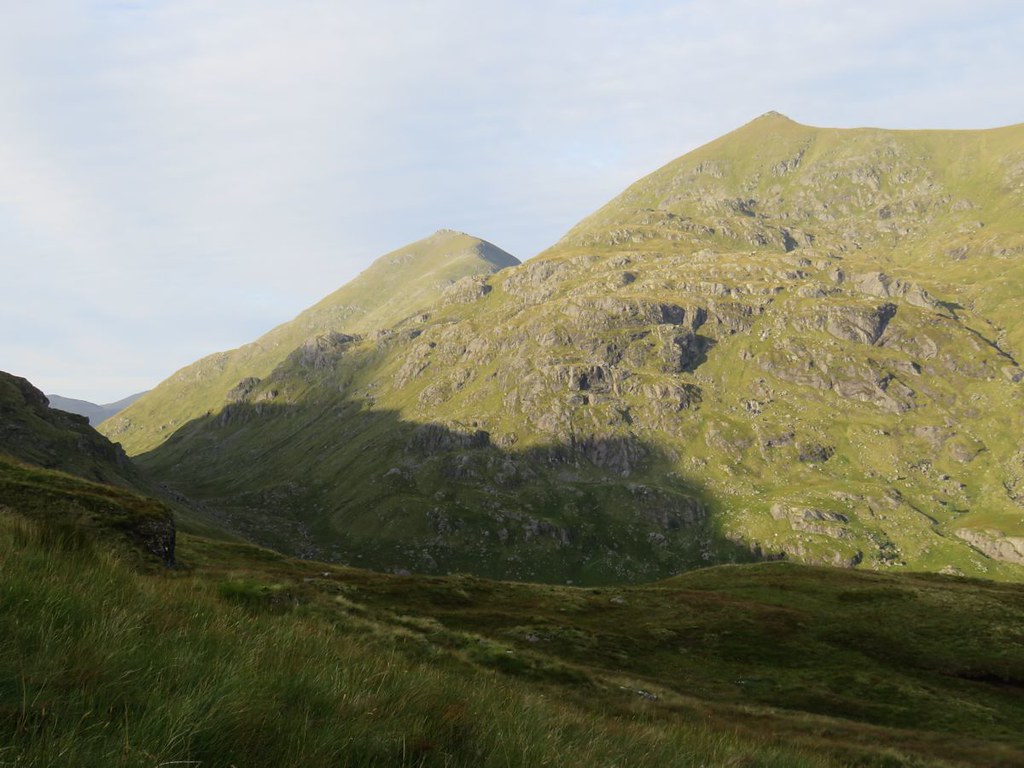 Crossed the stream just before it drops off steeply, there aren't any real waterfalls on the stream, just a continuous flow down the slab, quite remarkable 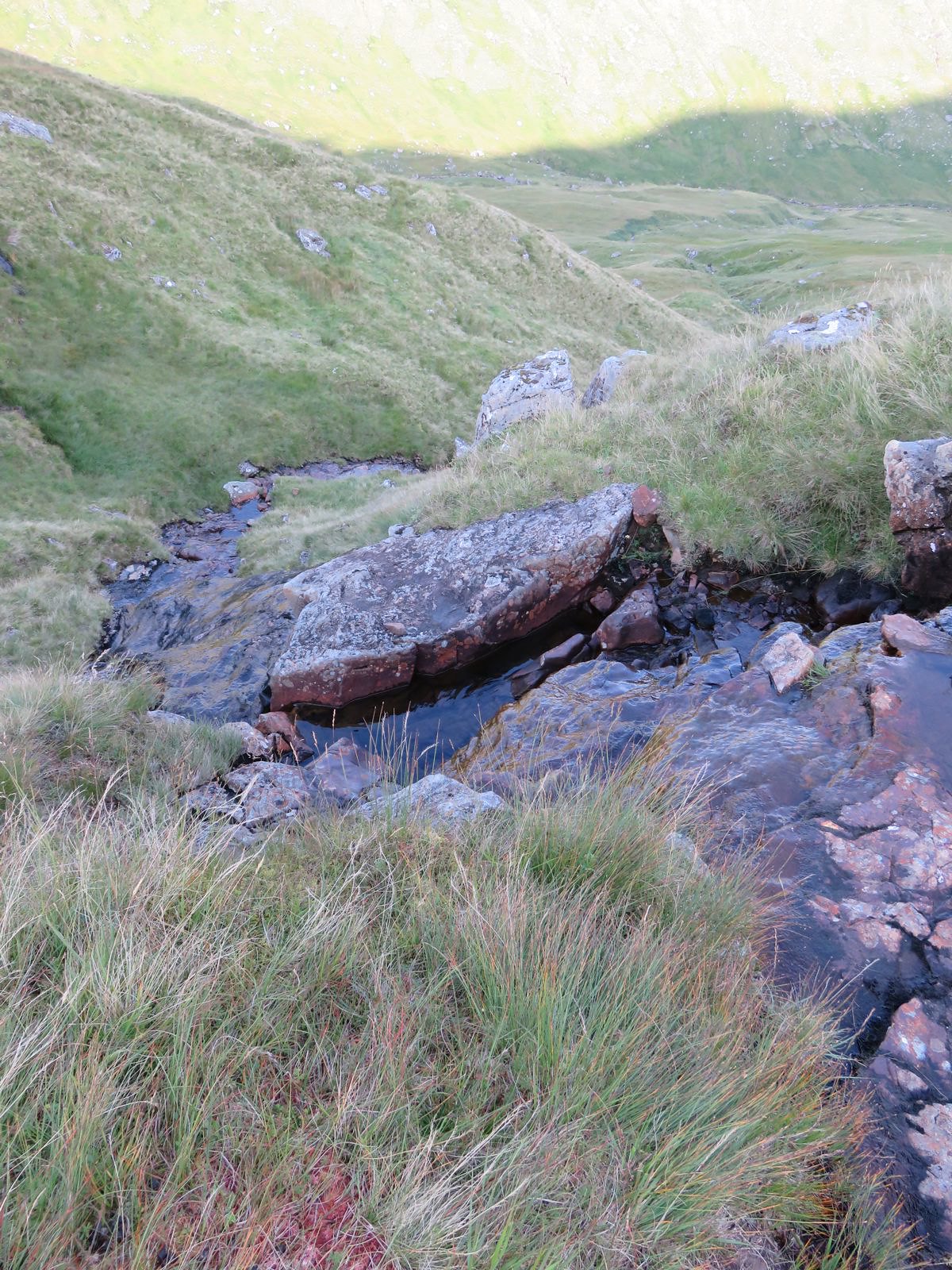 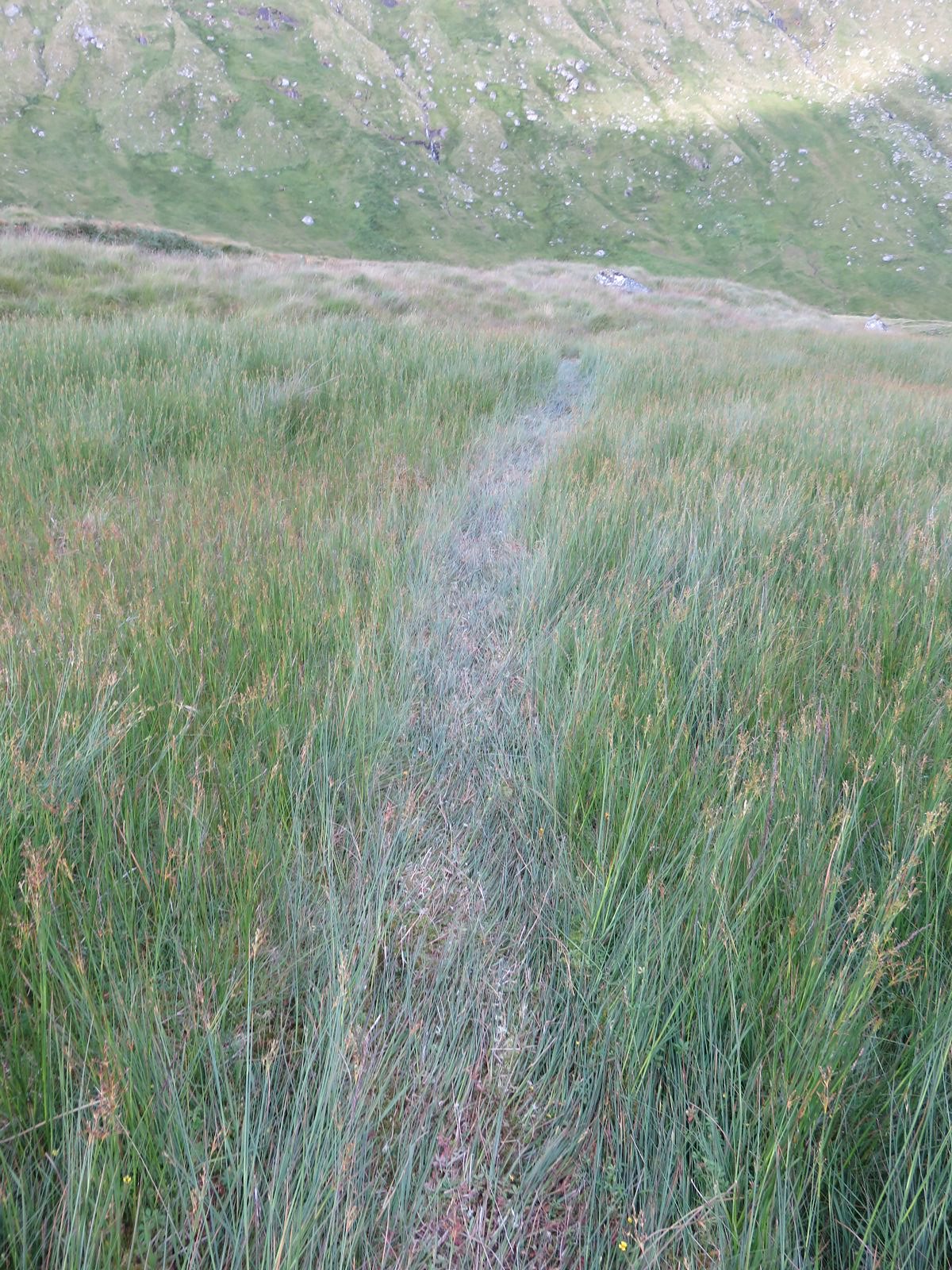 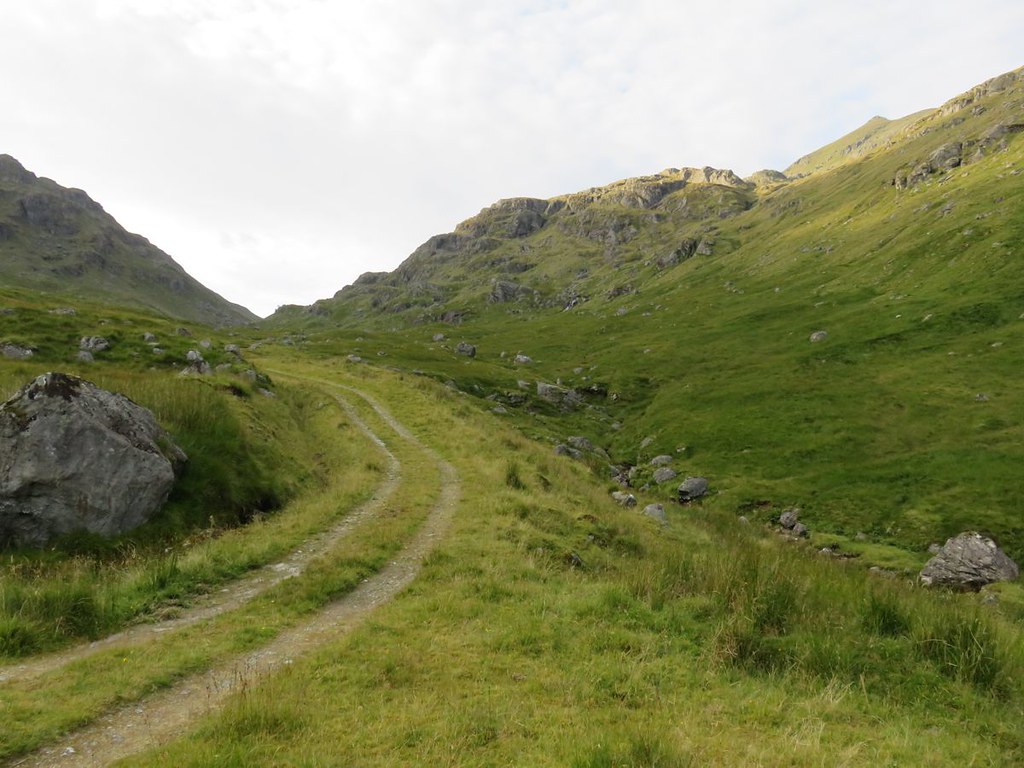 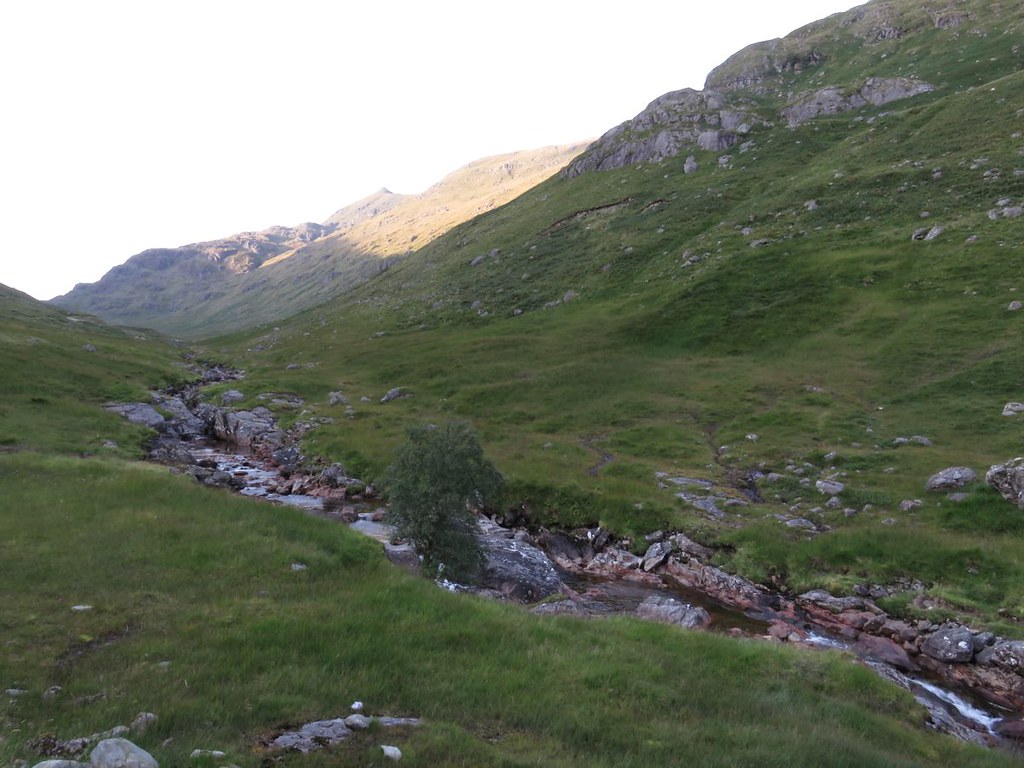 Glad you found the climb up Beinn Tulaichean a bit of a slog, I thought it might have just been me!!

When I did these two I slipped on the way down off the bealach and went flying on my bum for a few yards through a wet bog then it poured with rain near the end but by that time I really didn't care.

Really nice to see what the views are around these 2

Gordie12 wrote:Glad you found the climb up Beinn Tulaichean a bit of a slog, I thought it might have just been me!!

When I did these two I slipped on the way down off the bealach and went flying on my bum for a few yards through a wet bog then it poured with rain near the end but by that time I really didn't care.

Thanks Gordie12
Definitely took me a lot longer to gain the height than I thought it would, it's a steep slope and I didn't find a path until near the top.
Think it has dried out a lot in the last few days with a lack of rain and a dry wind

jamesb63 wrote:Really nice to see what the views are around these 2

Supposed to be nice for the next couple of weeks and I am keen to get back for Ben More & Stob Binnean, they looked impressively pointy from Cruach Ardrain

You are bagging quickly now

It brought my memories - I did exactly the same route 4.5.2015, it was clear day too, but the top still covered by snow, so it's nice to see the area in different colours

Some pics we did from the same place...

It brought my memories - I did exactly the same route 4.5.2015, it was clear day too, but the top still covered by snow, so it's nice to see the area in different colours

Some pics we did from the same place...

Cheers Petr, definitely the summit cairn shot on Cruach Ardrain is a match

A different day in your report

not be long before crisp snowy days are here again

Very pleasing to be getting a sense of Scotland's geography, though still many kilometers and views to go