We live in Lochgoilhead so see this mountain out of the window every morning. We call it the 'Weather Ben' because generally when it starts to disappear under the clouds it means we will get rain very shortly afterwards (and when we can't see it, it is already raining). My husband and I recently decided to start doing some proper hill walking and get some Munros and Corbetts under our belts rather than sticking to the lower level paths. So this is my first report on this site.

Beinn Bheula is very obvious as soon as you enter Lochgoilhead as it dominates the skyline at the far side of the Loch. We set off from our house (which is right on the slopes of Beinn Donich) about 7:30am and walked over to Lettermay (for anyone bringing a car it is possible to park over there but only room for a couple of vehicles at the turn off the 'main' road'. There is more parking at the holiday village about a mile from the start of the walk). The weather the previous day (early Sept) had been clear and sunny but today, typically enough, it was rather cloudy, with the top of Bheula invisible. Turning back, we could also see that the summits of Beinn Donich and The Brack were hidden in cloud, so would estimate that the cover was at about 700m. Bheula is strange in that respect in that it is often cloud covered when the others are clear and looks as though it was 'wearing a hat'. At loch level here there was no breeze at all.

We walked up the track through Lettermay and turned right onto a good forestry road marked for the Cowal Way. 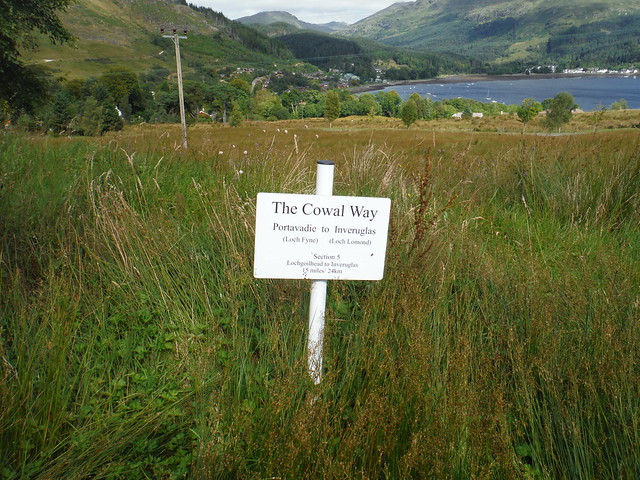 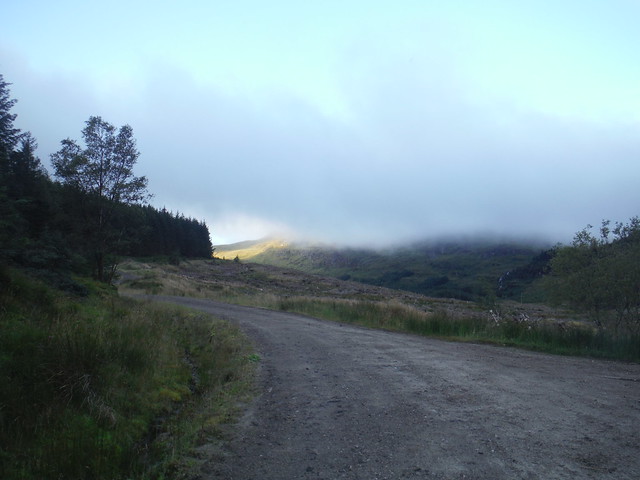 This winds upwards over the hillside for about 2km - until recently there was forestry to both sides, but to the right hand side this has now been cleared. There were some rather dreich views back to the loch at this point. 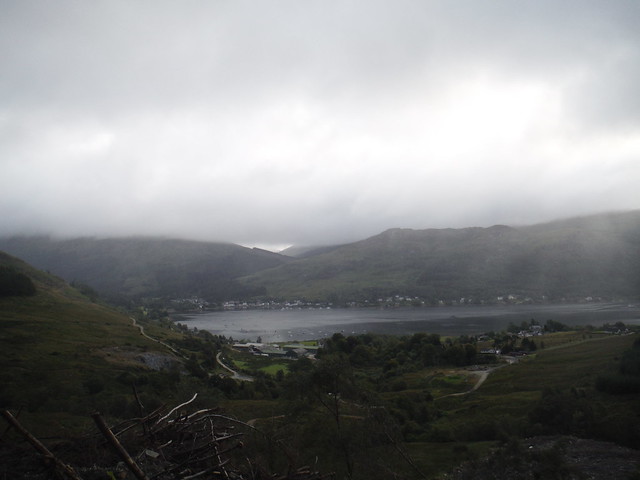 From time to time the sun broke through a bit though. 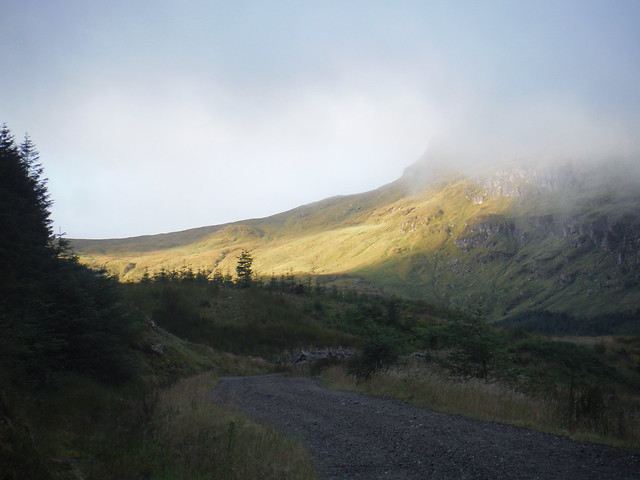 The path to Bheula now follows the route of the Cowal Way across a relatively new bridge. The trail now divides with (by far) the better track going straight on along the forestry road, and the Way bearing left onto a muddy track between trees. Turn left here at the white pole and continue along a rather boggy track which after a short period of time comes out on the hillside near a burn running down a series of pretty waterfalls. 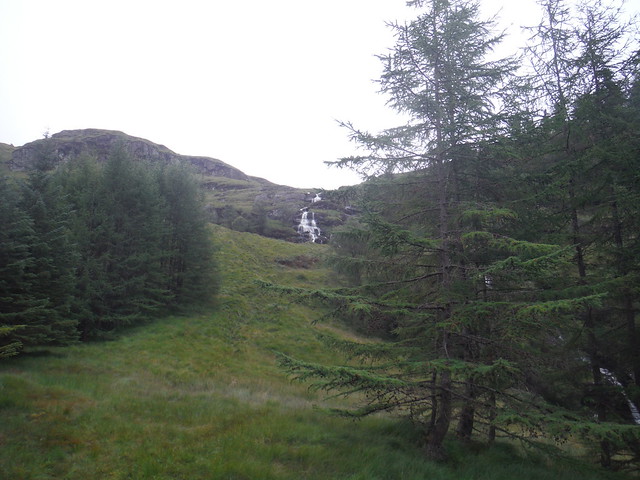 We did notice at this point that although it hadn't rained for a week (which is pretty unusual in this part of the world), it was still very muddy - so this walk deserves its rating as very boggy.

We continued to follow the Cowal Way up the left side of the burn. It was still a bit murky but there were starting to be some nice views. 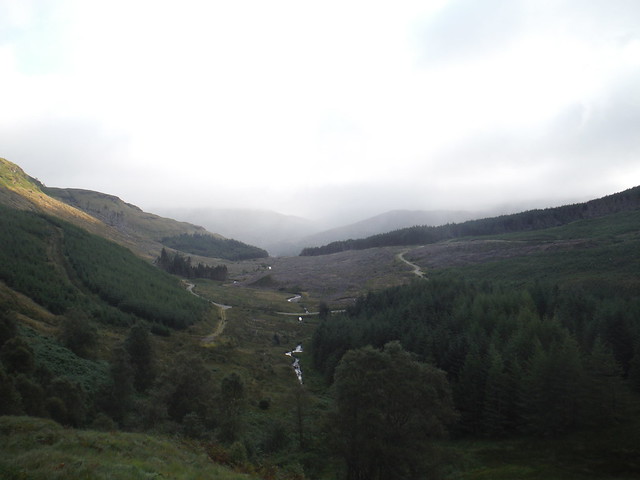 From time to time there was a white marker denoting that we were still on the official route, but the path was pretty indistinct and marshy. We then came to a fence running left right across the path. This was time to leave the Cowal Way behind and head onto Beinn Bheula proper (conveniently there is a gap in the fence). We were following a downloaded track on our GPS, but from here there literally did not seem to be a path, so not sure if we just missed it, or if it was so over grown as to be invisible. We turned left and followed the line of the fence upwards.

At this point, the walk was not that pleasant as the going underfoot was a combination of rough, boggy and slippy plus pretty steep. The wind was also starting to get up and the clouds were scudding past overhead. We kept the fence in sight to our left, and after about 100m ascent it bent to the right and some kind individual had rigged a stile across it by wedging some broken planks into it. 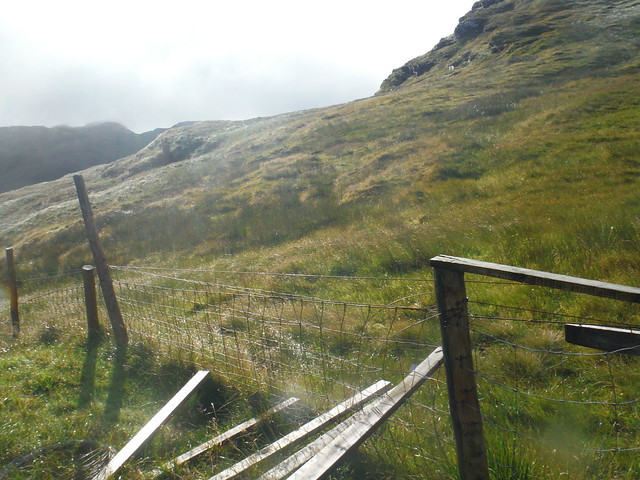 We crossed this and headed on upwards. By now the wind was pretty strong (perhaps about force 6) and gusting. Looking back we could see over Curra Lochain towards Strachur, and in the other direction the view was opening up towards Loch Long and the Firth of Clyde. To our left over Loch Goil it was quite sunny, but to the right we could see the cloud coming in in rolls. 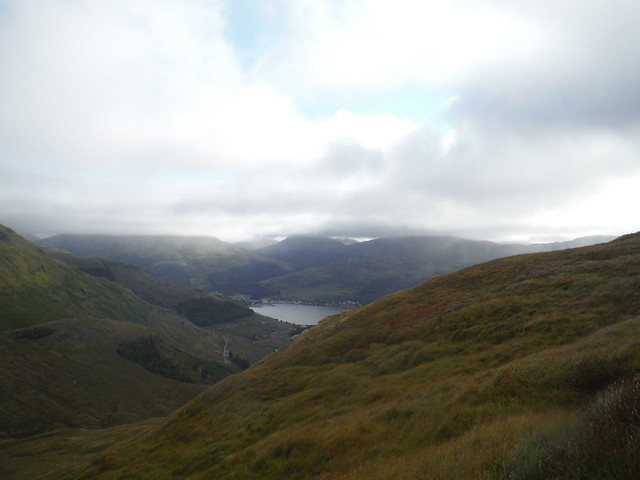 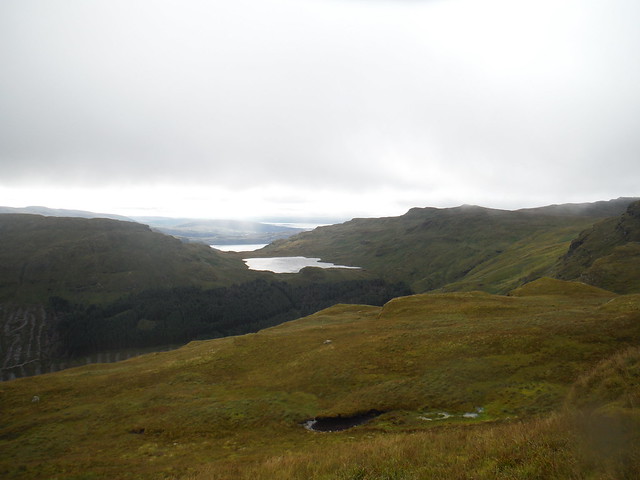 A crag loomed in front of us and our GPS track seemed to lead straight over it. We decided to turn to the left and skirt round it. This proved a good plan because we came out of the wind and the temperature seemed to rise by about 10 degrees. We skirted round the front of Creag A' Bhuic until we came to the deep gully of a burn (I think marked Eas na Faing on the map) and followed this up a steep grassy slope, still with some views. 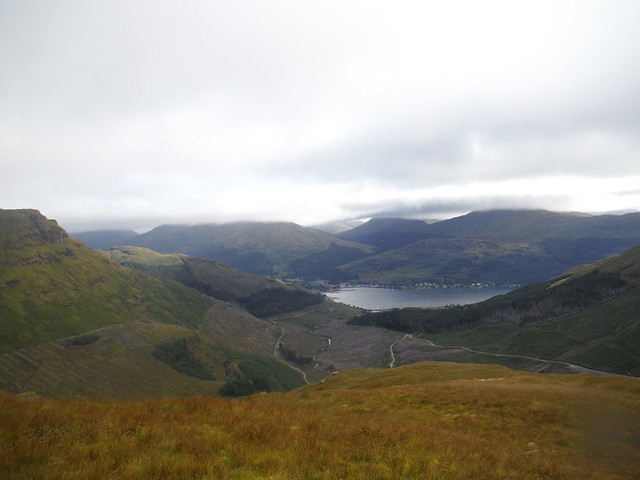 Then about half way up the gully, we hit cloud level and said goodbye to the views. We could see the mass of the main summit (the Black Castle) looming above through the mist. 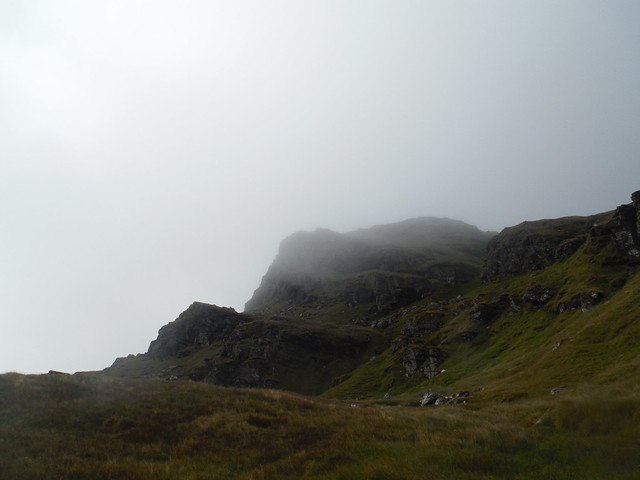 At the top of the gully we hit the wind again, and turned left to the summit. Only a few minutes walk from here to the triangulation post, but in spite of the wind the visibility was pretty poor and it was quite cold with the wind chill factor. So we took a quick photo and headed back down the way we came (I would have liked to have seen the plane wreckage if the weather had been better). 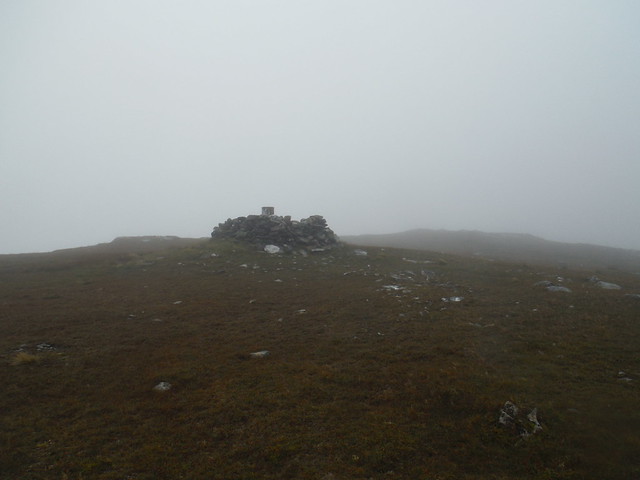 Once out of the cloud we stopped and ate our sandwiches (early lunch as only about 11am!) facing over Loch Goil with stunning views. We noticed that the summits of both Beinn Donich and the Brack were clear of cloud, although we still couldn't see the top of the Cobbler. 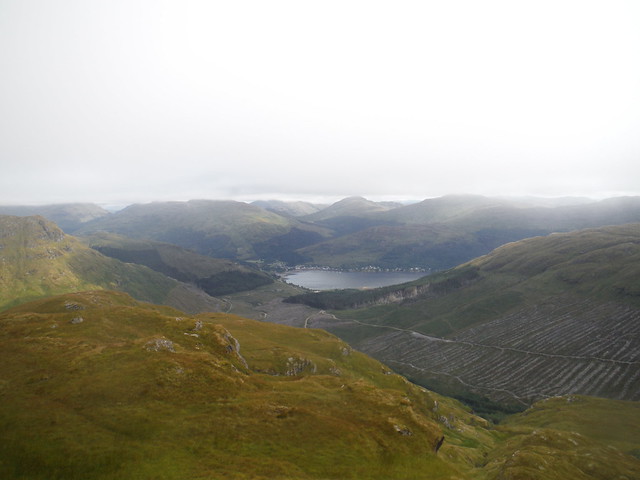 We retraced our footsteps and headed back down with the weather improving by the moment. Looking back we could now see all three summits of Bheula free from mist and clear ahead to Lochgoilhead. 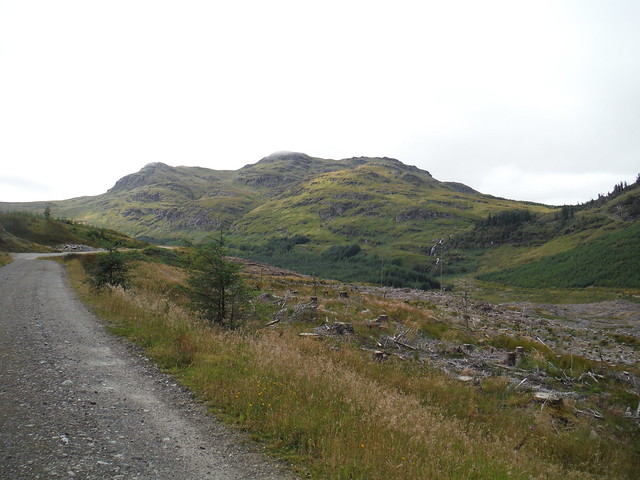 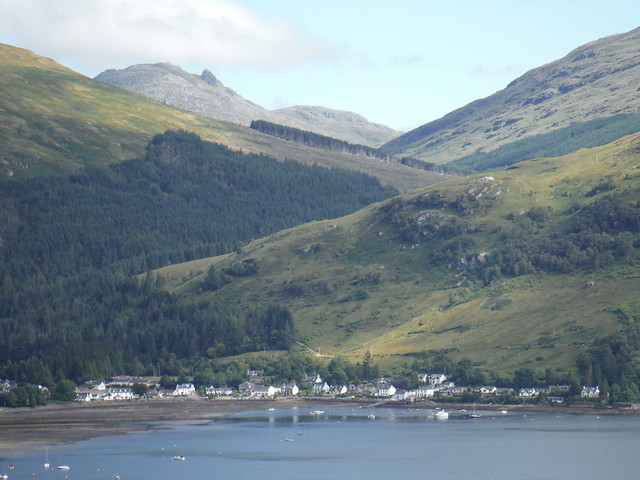 Back on the forestry road we met the only other two people we had seen all day, and headed for home with a brief stop at the shop at Drimsynie for ice lollies. By the time we got home, about 1:30pm, all was bright sunshine, although Bheula was still dipping in and out of the cloud. What a great morning on the hills, and what a privilege to live in a place like this.

Later this evening I popped out and took a picture of Beinn Bheula from my front door step. Sure enough, its hat of cloud was back on. 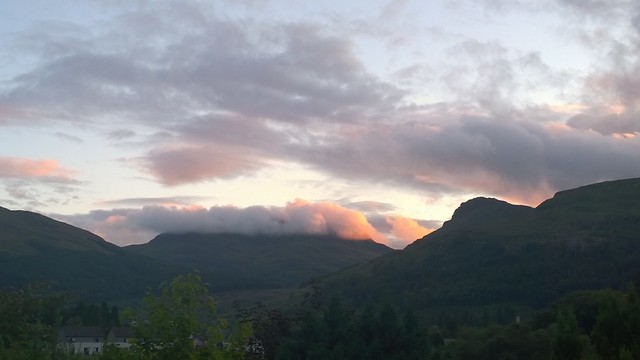 track.gpx Open full screen  NB: Walkhighlands is not responsible for the accuracy of gpx files in users posts