The mighty Sron Smeur, plus some other hills to its north...

The mighty Sron Smeur, plus some other hills to its north...


I was just back from a short business trip to Finland (as you do) and I only had this one weekend day free for a wee walk this month... fortunately the forecast was looking very promising

, and I thought this might be a good day to have a look at Carn Dearg and Sgor Gaibhre, a couple of relatively remote and obscure Munros between Rannoch and Corrour. Now, the classic route for these two is of course the round from Corrour Station. Scenic as that undoubtedly sounds, however, it does have the disadvantage that you currently only get seven hours between trains if travelling to Corrour from the Cities of the Plains (i.e. Glasgow), and that could be a tad tight time-wise... And Corrour southbound platform could be a parky place to find oneself stranded late on a September evening

! I therefore opted for the southern approach from Loch Eigheach, just short of Rannoch Station near the very end of the B846. That way I wouldn't have the pressure of rushing back downhill for a train, and the southern approach also gives the chance to bag a sneaky wee Corbett, and an even sneakier wee Sub2K, on the way back to the car

our_route.gpx Open full screen  NB: Walkhighlands is not responsible for the accuracy of gpx files in users posts
It's a long drive up from Glasgow all right, but a very scenic one all the same, particularly on a fine sunny morning

. At the moment there is some sort of big hydro-electric construction project going on in the area, however, and this means that parking is a bit difficult - a lot of the available spaces are taken up with earth-moving equipment or piles of earth

! However, I found myself a muddy corner beside a big pile of gravel, where it looked like I shouldn't be in anyone's way. Not such a smart move, in retrospect

...
There was a spectacular view south across Loch Eigheach from my parking spot, however. The route sets off up a track which follows the line of the historic Road to the Isles (aye, that one in the song: 'By Tummel and Loch Rannoch and Lochaber I will go...'

) - hopefully not quite as far as Lochaber today, however

! There was an intriguing sign to the right of the gate at the start. Apparently water voles are dangerous wee blighters. Who knew (Presumably the danger is TO, rather than FROM, these critically endangered furry beasties, but the somewhat surreal threat of suffering a nasty mauling from a horde of aquatic rodents did add an oddly pleasant frisson to the outing

...)
The track stoats merrily northwards, giving excellent going, alongside a line of plastic pipes that are presumably destined to become part of the new Hydro Works. Soon, the southern ends of the two parallel ridgelines of my target hills came into view: the steep end of Carn Dearg's south ridge, known as Sron Leachd a'Chaorainn, to the left (west), and the Corbett Beinn Pharlagain (which is really the southern part of Sgor Gaibhre's south ridge) to the right (east). 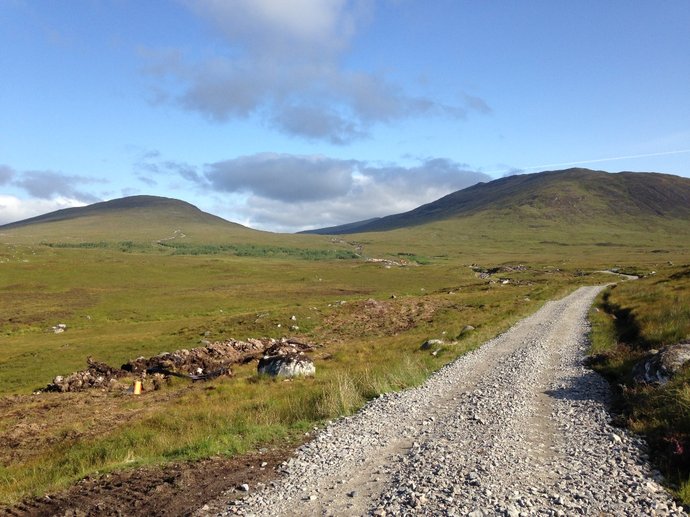 There was a good view east from here to the Sub2K Marilyn Sron Smeur, which has a rather scenic lochan immediately to its north, naturally enough imaginatively named 'Lochan Sron Smeur'. That was for later in the day, however! First up was Carn Dearg. I discovered a brand new unmapped track cutting across eastwards just below Sron Leachd a'Chaorainn, presumably part of the new Hydro Scheme. Now, loth as I am to get embroiled in the increasingly fraught Green-Energy-versus-Wilderness-Preservation debate, it seemed a shame not to use the new track given that it is already there. It certainly provides easy height gain to the very foot of Sron Leachd a'Chaorainn, leaving an undeniably steep but very short ascent up onto the Sron. On the way up the steep section, there was a great view westwards to the Mamores for distraction: The ongoing route northwards along the broad, undulating ridge, over the two minor tops of Point 821 and Meall nam Fiadh (Point 861) was a delight, with an increasingly good path developing to give dream going through short grass and occasional wee boulders. The views were consistently excellent, too. There was a very clear outlook on the Sgor Gaibhre / Beinn Pharlagain ridge over to the east, with the hulking mass of the Ben Alder massif brooding rather threateningly in the background: A bit further north, the 'Corrour Corbett', Leum Uilleim, came into view, with the Nevis Range and the Grey Corries lining up behind it: All too soon, I was up at Carn Dearg's well-built summit cairn, where more fine views awaited. Most impressively, there was a good vista down over the western end of Loch Ossian, with Corrour Station just visible: ...And the famously pointy profile of Schiehallion clearly visible to the south-east: However, I had more hills to climb. The traverse eastwards to Sgor Gaibhre proved remarkably straightforward, with an excellent and mostly very dry path giving yet more Very Good Going all the way to the second Munro's summit. There was an interesting view northeast to Sgor Gaibhre's northern Top, Sgor Choinnich, which is only slightly lower and was in fact classed as a separate Munro from 1891 to 1921. I was at Sgor Gaibhre's somewhat smaller summit cairn a good bit sooner than I'd expected. More great views! South-east across Loch Ericht to Schiehallion again: 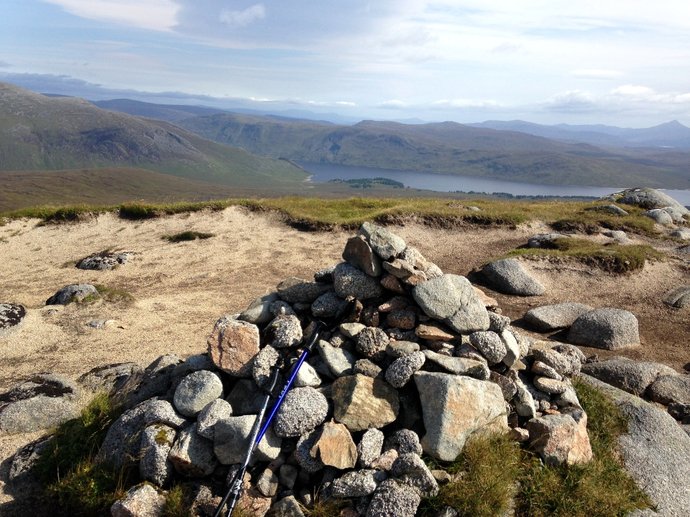 Northwest to the Nevis Range and the Grey Corries: And back westwards to Carn Dearg: Straight down northeast to a very attractive wee corry lochan that nestles between the feet of Sgor Gaibhre and Sgor Choinnich: 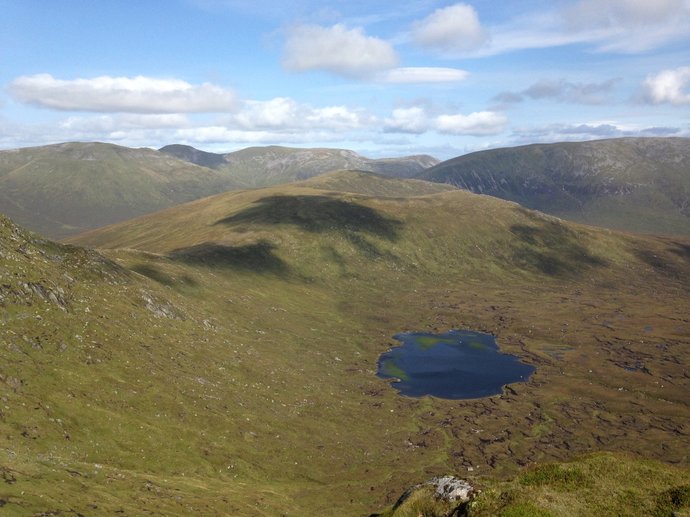 I stopped for a quick bite of lunch, then set off again down Sgor Gaibhre's undulating south ridge towards the bealach with the Corbett, Beinn Pharlagain. This Corbett is an attractively lumpy hill from this angle, with impressive crags along its eastern edge. There was only an intermittent path, but the going remained good and I made fairly quick progress. The last fifty metres or so were quite steep (there was an easier way up a bit to the right i.e. west, but this would have involved tackling a vicious wee bit of bog

). However, the steepness didn't last for long, and soon enough the Corbett's shapely summit cairn came into view, with Schiehallion insisting on getting into the act behind it: This group of hills all seem to boast great views. This was the outlook back northwest over Loch Treig to the Grey Corries from Pharlagain's cairn: Having pondered the easiest way down to Sron Smeur from Beinn Pharlagain, I opted to cut across SE to Pharlagain's lumpy southern Top, Garbh Mheall Mhor, which also sports a surprisingly big cairn, but then rather than heading SW from there down the Corbett's south ridge (which is the usual ascent/descent route if bagging it on its own), to aim straight south down the line of a wee stream to cross the flatlands at the immediate eastern end of Lochan Sron Smeur. From Garbh Mheall Mhor's summit, my whole intended route was clearly visible - it looked straightforward enough, but rather a long way down and across It was a bit of a plod right enough, and almost entirely pathless, but turned out to be relatively straightforward. This is probably Sron Smeur's best angle - it looks rather a fine wee hill when viewed across its Lochan. I was worried that the flat bit to the east of the Lochan would turn out just to be one huge swamp, given its proximity to Rannoch Moor, but actually it turned out not to be too drastic after all, and I was able to keep my feet fairly dry for once. Soon enough I was tackling the rather steep northeastern flanks of the Sron. It would have to be said that this late in the day, I found this wee hill more of a challenge than I'd expected

! However, after a fair amount of huffing and puffing, I finally got to the top. There is no cairn, but a big boulder appears to mark the highest point. Sron Smeur may be a relatively lowly rise, but yet again it can boast spectacular views over some remote country. Inevitably, Schiehallion was attempting to steal the show yet again: The Mamores to the west, across the Blackwater Reservoir: And northwest to Loch Treig: Now, it was about time to get back to the car and drive home to Glasgow. I cut down westwards, bending down north towards a small boathouse that was visible at the western end of Lochan Sron Smeur, from where a muddy-looking ATV track cut directly west in the direction of the main Road to the Isles track. Yep, that ATV track turned out to be pretty darned muddy right enough, but it still gave quick enough going, and it wasn't long until I was back on the main track and then back at the car.
One more adventure awaited, however: when I tried to get my car out of its boggy nook and back onto the B846, its front wheels stuck firmly in the mud, spinning helplessly ... In fact, I'd probably still be there, and might indeed have fallen victim to water vole attack, if a kindly stranger in a camper van hadn't stopped to help, and allowed me to stick two mats from her van under my front wheels for a bit of traction

. This worked a treat, but I'm not sure that those mats will ever be the same again... Anyway, if she ever reads this, I'm enormously grateful for her generosity

.
I found this to be a really great round, with a true sense of remoteness, and some fascinating rear views of even more remote mountains, such as the Ben Alder massif, Beinn Eibhinn and Aonach Beag

. If you decide to give it a go, however, do be careful where you park

. Saying that I really do need to get out and go up Bheinn Pharlagain (and perhaps those Munros again), as I haven't yet.

Some lovely colours in your photos. The grass may not be that brown yet, but they just look like Autumn with that soft sunlight

Cracking report. In fact I think I may have enjoyed reading that more than I enjoyed doing that round myself!

I did these from Rannoch also, and Beinn na Lap along with the Fersit Four...still not taken a train to Corrour!

Nice report, and some fab photos.