The views from the windows of our B&B in Portree couldn't have been more ideal for hillwalkers - from the lounge, you could see the Black Cuillin, Red Hills and, amazingly, one of Macleod's Tables. Brilliant for planning where to head based on cloud cover, and with a perfect weather forecast it was no surprise that all three were cloud-free. So it was decided - our first day on Skye would also be our first time on the Cuillin Ridge. Famous like no other hills in Britain perhaps, and although we didn't expect today's route to be particularly challenging, it was met with just a little trepidation. In particular, our planned descent via the ridge to Sgurr nan Gobhar.

Several greasy mouthfuls of breakfast later, we headed off towards Sligachan on the way to Glenbrittle. The view of the Cuillin from here yesterday evening had been impressive enough, with a thin layer of cloud obscuring some of the highest peaks, but it was no match for this morning's panorama. Wow! Booking a week's outdoor holiday in the Highlands a month in advance always carries the risk of weather-related disappointment and added midge problems in the west, but today's unbroken sunshine and gentle, but noticeable, breeze was ideal to keep the biters at bay. I felt like pinching myself to check I wasn't dreaming.

A short while later, we'd passed the already heaving Fairy Pools car park, and set off instead from the quieter layby by Glenbrittle Youth Hostel. An excellent path carried us along the side of the Allt a' Choire Ghreadaidh, with several idyllic cascades that would give the Fairy Pools a run for their money. The path branching off towards Coir' an Eich was easy to find, and only a little boggy after a few days of dryish weather. The odd midge stopped us hanging around too long, but they weren't a problem whilst moving. Looking ahead, the Cuillins were half-silhouetted against morning sun, but the views back to Beinn a' Bhraghad more than compensated, with the Western Isles just peeking out behind. The Allt Coir' an Eich was soon met, with a large group of walkers below ascending directly by the stream on what looked like tiring slopes. Here we had the choice of the shady coire followed by a scree run, or the shoulder of An Diallaid which had no protection from the sun, but easier gradients. We opted for the latter, crossing the stream and heading up steep, grassy slopes. A few minutes later we were regretting this decision a bit - no wind here, with a pocket of warm air sitting behind the higher ground and the odd curious midge again preventing longer breaks. The proper ridge was soon gained though, and the views more than compensated. Sgurr Thuilm looked magnificent. The views kept on improving on the way to An Diallaid - reaching the minor summit here, another wow moment as part of the Cuillin Ridge was revealed... Even looking at lots of photos can't prepare you for the sheer drama of the jagged peaks around here - we sat for a while, taking it in, and suddenly feeling very small. Beyond, the broader slopes up to Sgurr na Banachdich looked much more straightforward with the route to the summit clear. The path up from here is rough but grippy and striaghtforward, with several routes to choose from which could be confusing in the mist. Although we hadn't reached the top yet, thoughts were already turning to our ridgeline descent route, which we could now see to the right. As expected - yes, I'd seen a few photos - but hard to tell whether the steep sections would cause any problems. Soon after, the summit was reached - another wow moment, with more of the ridge revealed, and Loch Coruisk below dwarfed by spiky peaks. Sgurr Thormaid and Sgurr a' Ghreadaidh were just as impressive to the north, with narrow paths threading between boulders on the few flatter bits, but barred on either side by vertical cliffs and big drops. To the south, a lone, fluffy cloud was drifting around above Coire na Banachdich, perilously close to covering the ridge but behaving itself for now, and spawning baby clouds above Sgurr nan Gobhar. For the descent, the ridge towards Sgurr nan Gobhar is unmistakable in clear weather, and easy at first. Several faint paths lead onto the ridge, which converge as the crest begins to narrow. Most of the scrambles are in the immediate foreground just beyond the next photo. This was the only part of the walk that had been bugging me - my partner isn't exactly a fan of heights, so scrambling combined with exposure wouldn't be ideal. At least we could always turn back. In the end, he had no problems. The first scrambly outcrop was very straightforward. Beyond, each successive outcrop was slightly more difficult than the previous one, but never getting too tricky and never sustained. The rock is perfect for hand- and footholds. Some of the scrambles can probably be bypassed on steep ground to the left, but this wasn't necessary today. One of the scrambly sections: The cloud in Coire na Banachdich had mostly dissipated by now, revealing more brilliant views, this time towards Rhum. 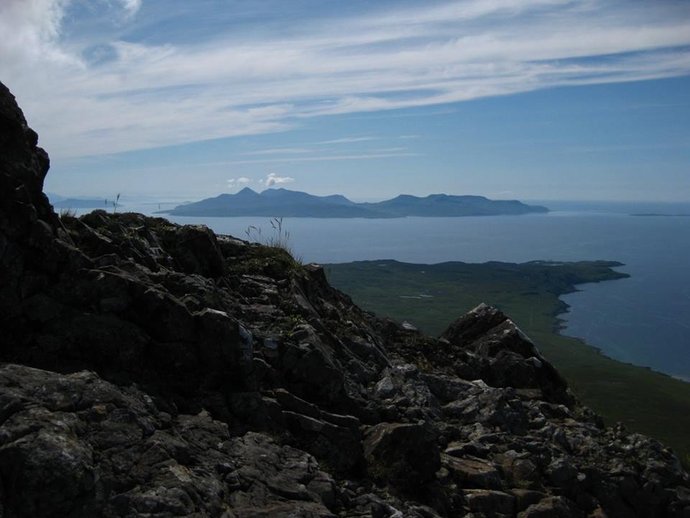 Looking back over most of the little scrambles: 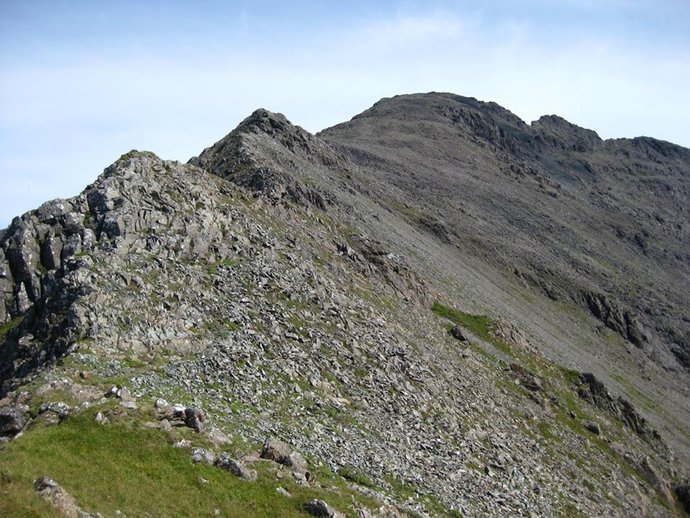 The ridge is more straightforward beyond these initial descents. With a northerly wind today, every time the path headed onto the left side of the crest, the wind dropped and the temperature seemed to shoot up about five degrees. Fortunately we were never far from the breeze on the ridgeline. The ridge abruptly ends shortly beyond Sgurr nan Gobhar summit. If you want a really quick descent from here, you could head down the direct route...

but this might also be the last thing you do Instead, we headed left, southwest down scree, following faint paths. Route-finding was much easier than it could have been, as the slope is slightly concave, so you can see most of the way to the bottom with few hidden drop-offs. Surveying the way down: 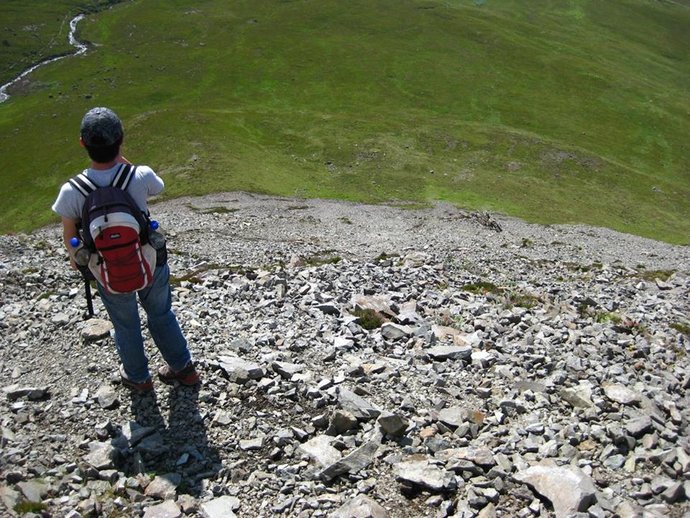 Gravity obviously helps here, and the descent was easy enough, with only one moment of drama involving a dislodged rock hurtling down towards another couple of walkers far below... "heads!", but it fortunately stopped short of them. We never caught up with them to apologise. It definitely wouldn't be fun ascending this way! Looking up from the base of the scree: Once grass was regained, we headed around the base of the hill, descending slowly and meeting the ascent path by the cascades again. This was pathless, but not really wet - the odd area of longer grass lower down was more annoying. Still, views always help... Before heading back to the car, we went for a paddle in one of the shady plunge pools next to the stream - no-one else around, and beautiful clear, cold water. The Cuillins had already exceeded expectations in so many ways - even if it rained for the rest of the week, I'd be satisfied that we'd had a perfect day up there... Re: Sgurr na Banachdich - first time on the Cuillin Ridge

Great to get the weather to get the nice photos, even though as you say no photo can convey the actually