Ben Nevis Via the CMD Arete

Ben Nevis Via the CMD Arete


On short notice, my friend Dianne and I took a day off work on Tuesday 8th September. The weather had been outstanding and was to continue to be so, so we went for it! This had been on our radar for a while now. We had never wanted to climb Ben Nevis via the Mountain Route...mainly because of all the tourists, so the challenge of the arete really got us inspired for it. Neither of us had done a ridge walk before but we'd been advised that this was one of the "easier" of the ridge walks in Scotland.

We left home (Troon!) at 4:30am. I was soon left alone in the front of the car to do the driving whilst Dianne went for a snooze in the back. I was fine with this, as I'd never driven up past Tyndrum before. The low cloud was just clearing and the sun coming up properly when we reached Glen Coe. All I can say is wow...I think I had found the most beautiful place in Scotland I had ever soon so far: 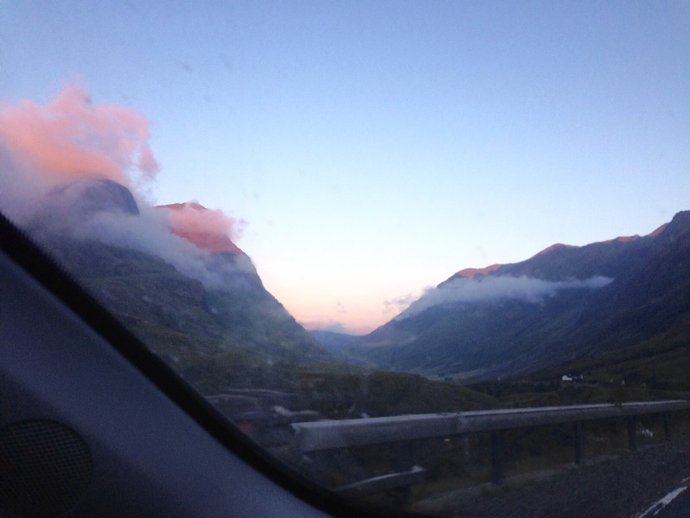 No words but wow.

We arrived at the North Face Car park at roughly 0730 and had started walking by 0750 (we mark times now to challenge ourselves a bit!)
The walk through the forest was a tough start, mainly because we were carrying extra food and water as it was a longer day than usual, but we were soon out and in full view of the mist and the Ben and CMD peeking out from underneath. Up the path we went, hitting the bog when you turn off the good track. Both of us currently hate bog due to an accident in a previous climb so we found it pretty tough going and, if memory serves, it was like this for at least 1000ft of the climb before we hit the decent path up to the top of Carn Mor Dearg.
We stopped for a bit to eat about 10am to refuel and continued on. We thought the track was pretty good here, although our feet were slipping every now and again on the loose stones and dirt.
We'd walked right out of the mist without realising it at one point.....and then quickly discovered we had both left our sunglasses in the car! Disaster! Headaches abound...especially when the skies were totally clear! 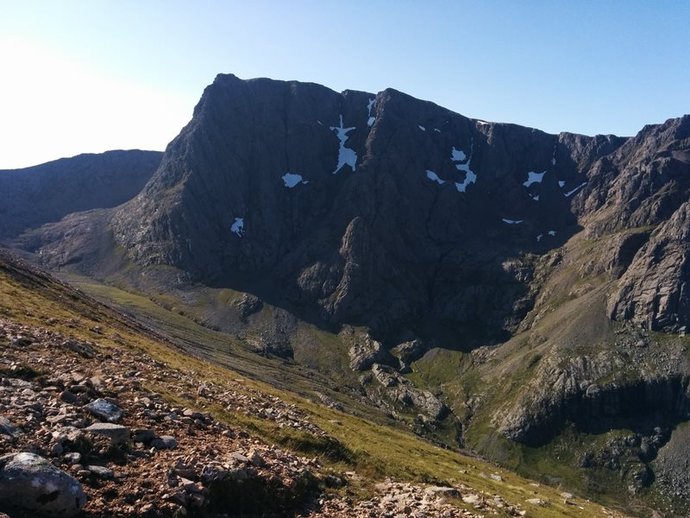 The wind was starting to pick up at this point and we were quickly realising that it wasn't going to be the light 10mph winds that the weather advised of. Both of us, being a little scared of heights were starting to get quite wary of the arete at this point but we pushed on to the summit of CMD and right into what felt like 30mph gusts.

Stopped for lunch and got some amazing views and had a chat with a climber who had done the arete previously. At this point we were thinking of not going on, but after listening to his advise and seeing a few other people getting on with it we decided to give it our best shot.
We tried the bypass track to start off with. When we had finished the walk we looked back on this and decided it was the worst decision. The track is loose in places and after a couple of slips we were very very wary of continuing. Dianne took a quick break to calm her nerves and I pushed on to see what the lay of the land was. After a small chat we decided to go up on the ridge. How I wish we had done this from the start. It was AMAZING! Admittedly it was slow going for us, as Dianne had gotten a little shaken on the bypass path and was taking her time. But after a few more breaks we got closer and closer to the end.
At one point, I looked down towards the CIC hut at the base of the north face and right there in the tiny pool of water was a Stag! All on his lonesome.

We used the bypass path again near the end to avoid the thinnest part of the ridge and then find ourselves on the "Boulder" section of the climb to the summit of Nevis. Again, both of us found this a bit of a laborious process.
Personally, I think the best part of the climb was behind us. We pushed on, spirits raised a bit by some other climbers who were friendly and chatty (including a man and his dog who apparently had climbed every munro 3 times!)

And finally, some 9 hours after we left the car park we reached the summit of Ben Nevis.

We climbed to the trig point and took the obligitary photos: Expressions says it all.

Both of us were struggling to be impressed with the wide open space and the large number of people wandering around. Normally we would get right up to the edge of a summit and take more pictures, but this time we just wanted to get back down.
on our way down we changed the route slightly, dodging tourists and folk hiking up when the sun was coming down (!) and finished up at the Glen Nevis Youth Hostel and phoned ourselves a taxi to take us back to the North face car park and the long drive home.

It was a long day. It took a day or so for the fact we'd completed this challenge we'd set ourselves to sink in. But we'd done it. And probably won't do it again!

I did the same route on the preceding Saturday, but in the other direction. Like you I hadn't done the CMD before, and the weather at the time I was on the ridge wasn't quite as good as you had it; but it is, as you say, AMAZING! To get a real 5 star rating, a ridge needs brilliant views in both directs, and this the CMD really does have.

And isn't the spectacle of the North Face simply mind-blowing?? (BTW you got some great pics there

Given you were so impressed with Glen Nevis (as was I, particularly after not having been there for 50 years), and the CMD, I'm quite surprised at your closing comment

Aren't you tempted by any of the Mamores? You also got some fabulous views of this very attractive ridge

well done,you got a great day for it.wene the weathers like that the arete is a great place to be.

This way up via the CMD arete is much enjoyable

Glad you had the views and blue sky...

Alteknacker wrote:
Given you were so impressed with Glen Nevis (as was I, particularly after not having been there for 50 years), and the CMD, I'm quite surprised at your closing comment

Aren't you tempted by any of the Mamores? You also got some fabulous views of this very attractive ridge

I'll be doing the Mamores next year hopefully. And the Glen Sheil Ridge as well I hope!
I think the length of the day and being slightly underwhelmed at the top of Ben Nevis after getting to walk such an amazing ridge was making me feel like I probably wouldn't. If I ever do end up back there I will do it the other way round as well, but park still in the North face car park and walk up round the half-way lochan.
And now that I'm thinking about this I actually want to go and do it again

Well done to you both for going ahead and doing this. It's a great route in weather like that.

Ah, that brings me right back to last year. Such a great walk! I’m glad you changed your mind and now want to do it again.