A marriage proposal on Loch Lomond, celebrated by a hike

A marriage proposal on Loch Lomond, celebrated by a hike


A marriage proposal on Loch Lomond, celebrated by a hike along the Rings of Steall.

As she came down the stone path, she quietly whispered,‚Äù I think he‚Äôs proposing to her!‚Äù
‚ÄúOh, I think you got it wrong!‚Äù was my quiet response.
Then, kneeling, I drew out a the red velvet box I‚Äôd been secretly carrying all the way to Scotland. ‚ÄúWill you marry me?‚Äù I asked with traditional Scottish bagpipe music playing and gradually changing to The Wedding March. 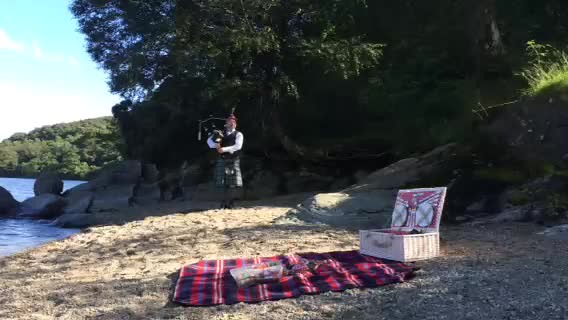 It's a video, and has sound. So please watch it with your sound turned on!

This all started a couple of weeks ago. Back then, scheming and planning, I‚Äôd been trying to put forth my grand plan, to a proposal that wouldn‚Äôt be refused. My girlfriend and I were planning a two week trip to Iceland with a stopover in London. While looking at what views and scenery the UK had to offer, we gradually changed our plans and ended up with three weeks in Scotland and a couple of days in London.

To get into the swing of things, I started listening to traditional bagpipe music. I found its unique sound quite mesmerizing. This got me thinking, what could be better than to propose with bagpipe music playing in the background?

Writing down my thoughts, I asked the walkinghighlands forum members about their suggestions http://www.walkhighlands.co.uk/Forum/viewtopic.php?f=1&t=54375. The response was outstanding. Using their suggestions, I contacted munrobagpiper who (http://www.walkhighlands.co.uk/Forum/viewtopic.php?f=9&t=41501) came forward and offered his services. Though at first the idea was to propose on the Rings of Steall itself, as the proposal date came up, I had an ominous feeling that I should go with a simpler approach. With memories of past hikes my girlfriend and I had had that went on quite unexpected routes, I feared I‚Äôd miss munrobagpiper, and leave him by himself, playing to some random sheep perhaps.

So, we agreed, I‚Äôd propose on Loch Lomond, and as fate had it, it was a clear Thursday, with a beautiful sky and bright sun. There, enjoying the outstanding picnic prepared by munrobagpipe and his girlfriend, we decided, spontaneously, to celebrate our newly formed connection by hiking the Rings of Steall.

While most walk reports here describe unimaginable feats of hiking 40 miles in a single day, or completing a 100 km hike in two, this is quite the opposite. While my girlfriend and I are in OK shape, we‚Äôre still amateurs in using a map,and the topography in Scotland is quite different from what we‚Äôre used to.

We got to the Ben Nevis Campsite very late at night and set out early next morning. To make sure the weather was right we asked people in camp, all seemingly quite experienced, their impressions about the day‚Äôs weather were convincing. ‚ÄúThe weather is brilliant, it doesn‚Äôt get much better than this,‚Äù was the response. Apparently, in our sunny, Mediterranean jargon, brilliant weather means quite a different thing.


We made our way to the Rings of Steall car park, what should have taken only half an hour or so, took much, much longer. Without much experience of driving in the countryside, we got stuck behind several groups of sheep that seemed to have their own timetable. 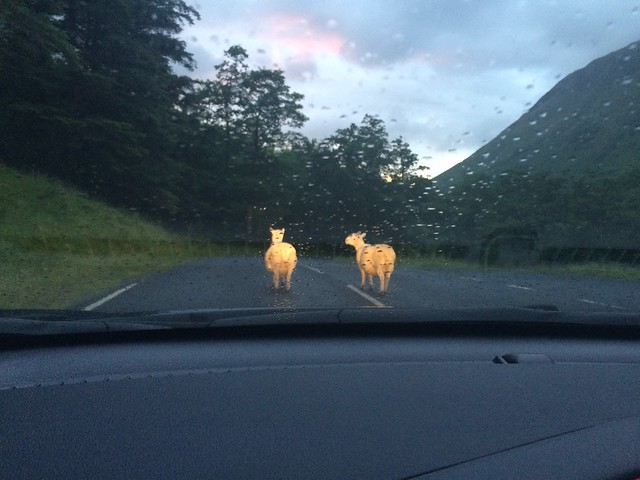 Sheep roaming the road, blocking cars and in general bullying the traffic

After an hour‚Äôs walk on a nice, clearly marked path, we arrived at what appeared to be a wire bridge. Not sure how to use one, we decided to attempt to cross through the river itself with well placed footsteps on mischievous stones. The current was strong and after getting our feet, shoes and trousers wet, we learned how to use a wire bridge. Luckily ,the way back didn‚Äôt require going back this way. 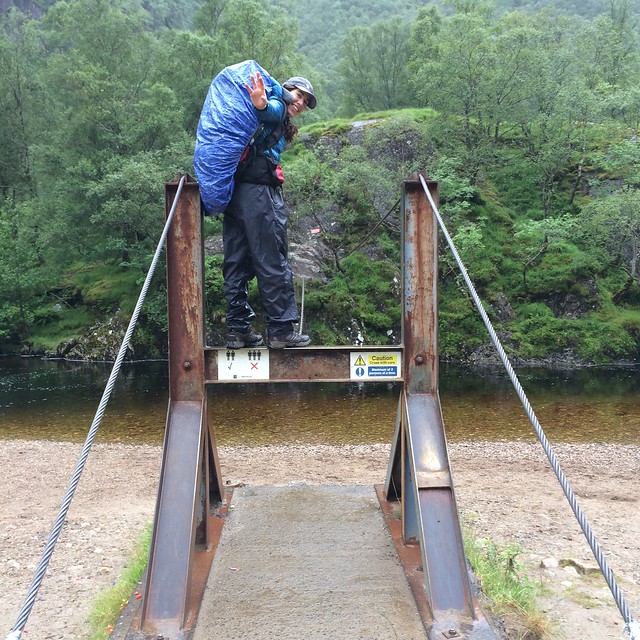 Then, through boggy terrain we arrived at the waterfall. For the next hour, we tried to decipher what the correct way to cross it was. From where we come from, there aren‚Äôt many waterfalls, and when there is one, you don‚Äôt cross it, you just start a barbecue at its base. We more or less gave up and decided to wait for other hikers and see what the right way to approach this crossing was. Half an hour later a group of four appeared, ‚ÄúI hope you don‚Äôt mind, we‚Äôre tagging along,‚Äù we announced. Selecting the right crossing point was crucial, but once detected it was quite easy. All that's required is to nonchalantly step into the water and not bother about wet socks. 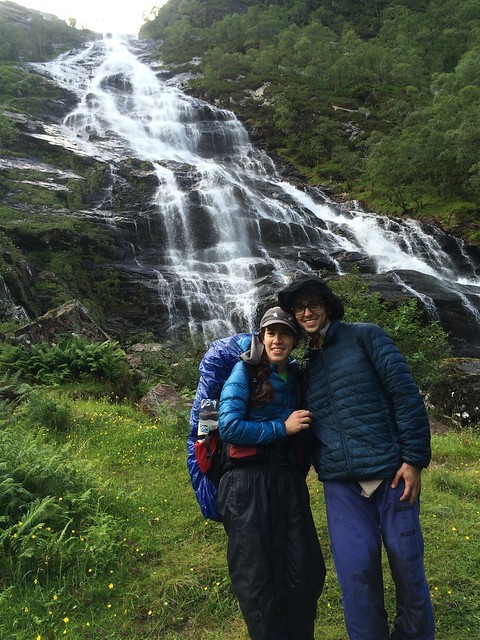 
Although the trail itself isn‚Äôt too long (18 km), it did take 10 hours to complete. Some of the highlights being a crumbling mountain top that we wanted to cross by walking on its ridge. Also we had a surprising encounter with a mysterious cloud that decided to land just on us, as we arrived at the mountain peak. By the end of our hiking experiences in Scotland, I can now pinpoint that this was the first encounter of many more to come. 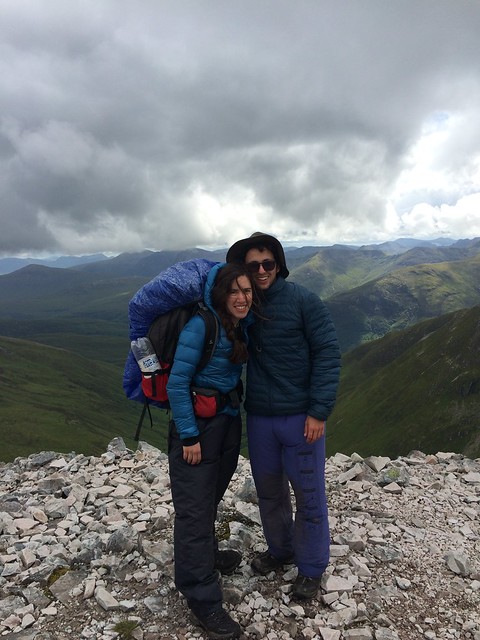 Photo of the incoming cloud, moments before it was upon us


After completing the circular path and arriving back to the car park we noticed a sign that must have been there for quite some time, even though we somehow missed it. Looking at the signs, warning of the great danger ahead, we felt quite accomplished to have finished our first trail in Scotland with so many great pictures and memories. 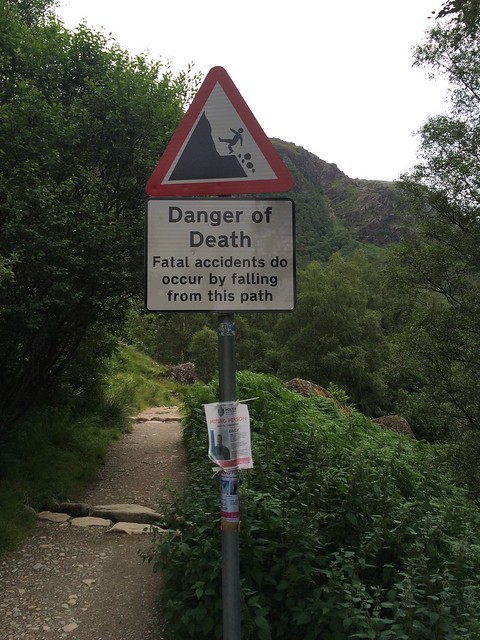 Apparently this sign was here, lucky we didn‚Äôt fall I guess 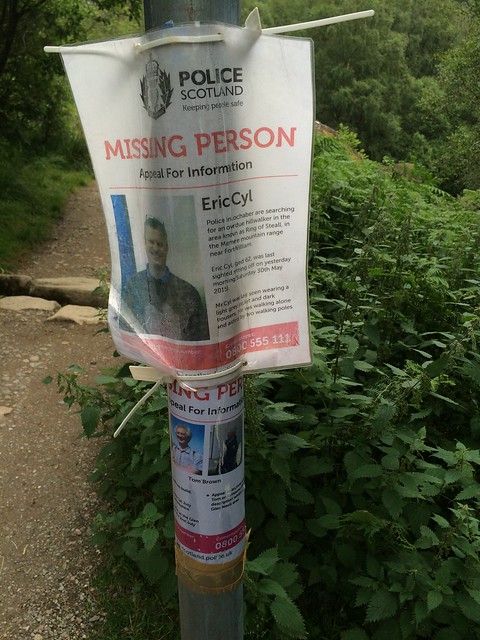 Hearting breaking. We didn‚Äôt find any of these guys. It does add a certain ominous feeling to the trail

The ring of steall is a serious walk, so congratulations for that also

I've done scrambles that scare a lot of people, and I often climb very dangerous trees for a living, but that wire bridge scared the life out of me

Yes I'm sure it does

oh that was so lovely!
Well done to you for keeping it secret!

Congratulations, may your lum aye reek ( may you always have fuel for your fire )

Congratulations, what a great way to propose, and to celebrate!

Congratulations and all the best to both of you

Great choice of route to celebrate

All senses are working in such a beautiful area

Wise, wise decision to have the proposal on Loch Lomond side and do the Ring of Steall separately. I have heard of people who were supposed to meet up as their paths crossed to exchange car keys.....and never met. Congratulations.
May you always be as happy as you look in the photos, and thanks for keeping us updated.

Congratulations and what a lovely way to propose!

Having read your post on the general discussion forum, I was curious what you managed to arrange. Thanks for the update. Great report too!

Congrats! A great way to start things. If you can both manage this sort of stuff, then it augers well for the future

I chose paddling over that wire bridge as well.