Munros included on this walk: Beinn a' Chreachain, Beinn Mhanach

our_route.gpx Open full screen  NB: Walkhighlands is not responsible for the accuracy of gpx files in users posts
Weather forecast was optimistic for the West Highlands and I was due to meet up with an old friend from working days in Glasgow - up from London to try out his boots. No doubting his fitness though - he'd come up to cycle the 90 mile Bealach Mor Sportive at Applecross 2 days before! He was staying near Killin, so I had an idea to help me mopping up some stray munros nearby. I had walked the Dorain-Dothaidh-Achalader ridge a couple of years ago, but had to turn back before the end annoyingly! I also had Beinn Mhanach to do, and I noticed others had managed to combine it with Beinn a'Chreachain from Achallader Farm. I'd always imagined cycling it from Auch Farm, but this fairly challenging alternative seemed like a plan.
As we bowled up the road the clouds were still sitting quite low but better as we turned northwards at Tyndrum. Even so when we pitched up at the Achallander road end car park there was still a thick blanket stubbornly filling the valley we were headed for. Grrrr. I hate it when clouds do that!
A bit boggy to start with - the effects of the heavy summer rainfall was certainly noticeable here, but at least the path diversion over the hillside was clear enough to meet the old track up the side of the Allt Choire Achalader, leading to the old wooden bridge over the West Highland Railway and onto higher ground. 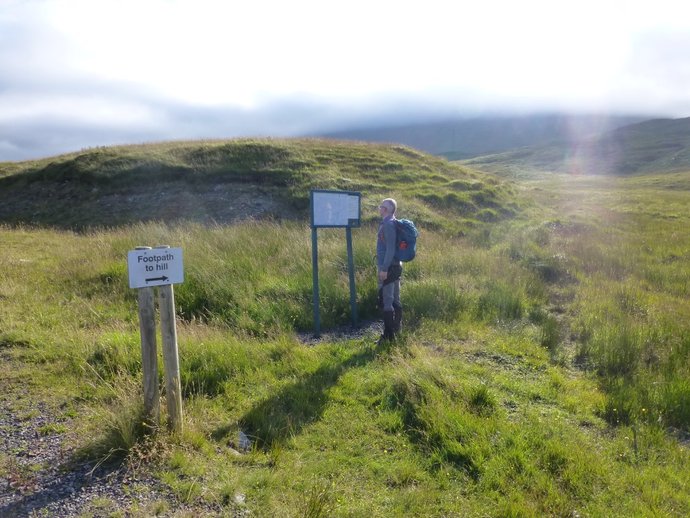 the path diversion joins the old track up above Achallader Farm 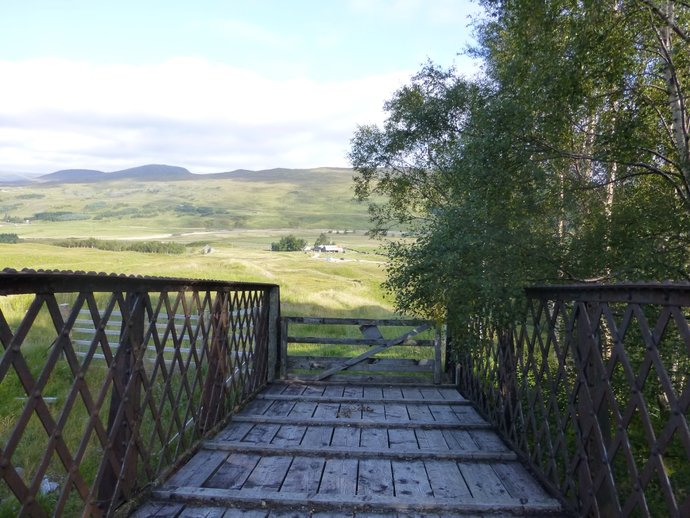 Interesting to see the new hydro scheme going in, but it was a bit jarring to have workmen standing watching us puffing and panting up the hillside when they'd just jumped out of a pickup, having broken no sweat to get there at all! Once we'd left the engineering work behind the valley became wilder and the river falls more dramatic with some scrambling to be done up the side of the burn. Even better, the cloud was starting to break up nicely ahead of us and the sun was coming through! 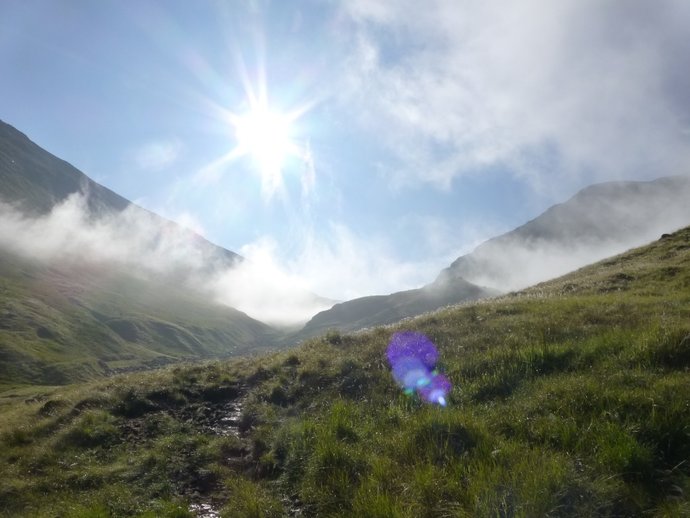 It's quite a long way to the bealach but a dramatic upper section in Coire Daingean , with impressive crags and steep hillsides to to either side.

looking back down the Allt Choire Achalader

We stopped at the Dothaidh-Achaladair bealach to survey the scene. 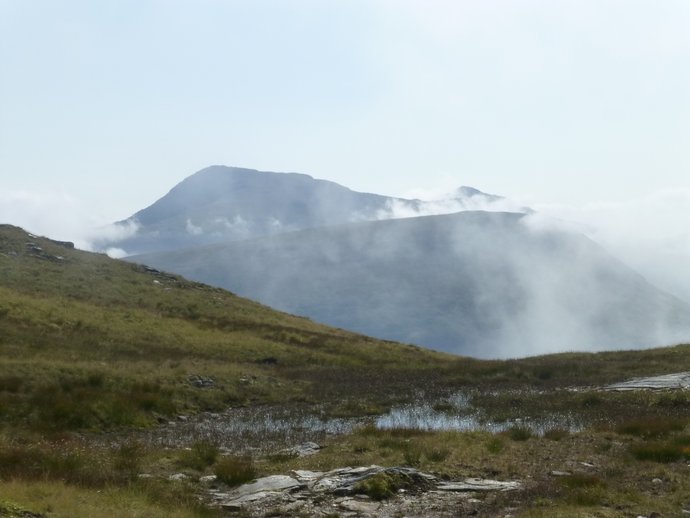 Still a bit of cloud ahead....

There was still quite a wall of cloud swirling around ahead of us and I'd read that finding the route to Beinn Mhanach in poor visibility would be challenging, so heading over Beinn Achalader first was an option as this was well out of cloud. Happily, while we were mulling things over the clouds lifted more decisively, and an array of lumpy hillls appeared ahead of us. It turns out that - cloud or no cloud - Beinn Mhanach likes to hide behind Beinn Chuirn, but even that is also hiding round the shoulder of Achalader. So, armed with a bearing just in case, we took the narrow descending path round the steep grassy east-facing slopes of Achalader in search of the Achalader-Chuirn bealach. There surely was a path here somewhere?!

No doubt this would be a nightmare to find in murky weather, but we could easily spot the dark peaty patch and headed for it. No path, just boggy ground most of the way back uphill, avoiding the crags on Beinn Chuirn and still no sign of Mhanach. It only really came into view when we made the bealach - a nice broad grassy rise leading to the not too distant summit - not exactly exciting but I had been warned by my guide book, and I enjoyed it more than I expected! 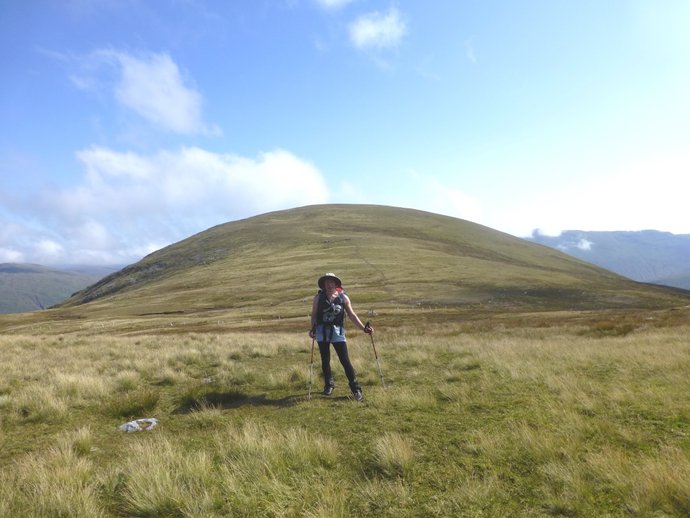 An oddly-dressed woman about to stride up Beinn Mhanach! oh yes, that was me!

The views from the top were grand too - east to the head of Glen Lyon and west to the Dorain-Chreachain ridge with a full array of summits in view across Rannoch Moor and well beyond. 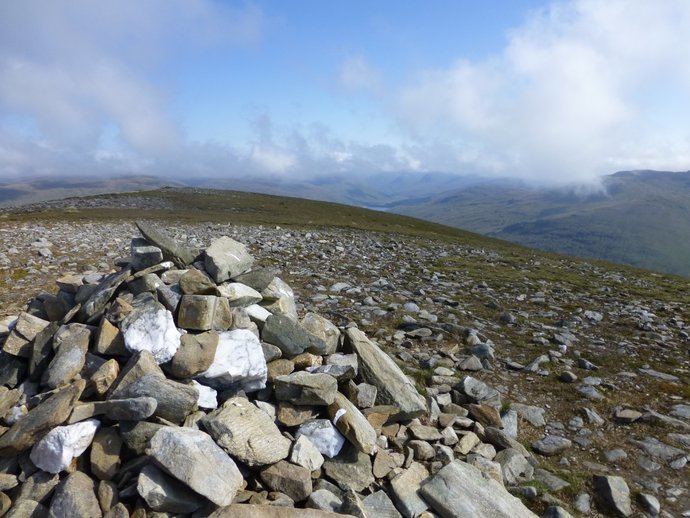 An added bonus from the summit - the view into Glen Lyon

After a bit of a breather we dropped back down to the Achalader-Chuirn bealach, debating the best way up onto Beinn a' Creachain. I felt I was shortchanging Alistair by not taking in Beinn Achalader and suggested a direct route onto its southern top which lay pretty much 'opposite' us. But Alistair's not a munro bagger [yet] so didn't seem too bothered by this idea, and we eventually settled on the original plan which was to cut across more potentially boggy ground to the Aoghlain bealach. In the event it was easier going than it looked, and much of the route we were watching - and being watched by - a large herd of 60 odd red deer just below Coire nan Clache. They eventually took flight higher into the corrie and we topped the bealach to meet the path dropping off Beinn Achalader. 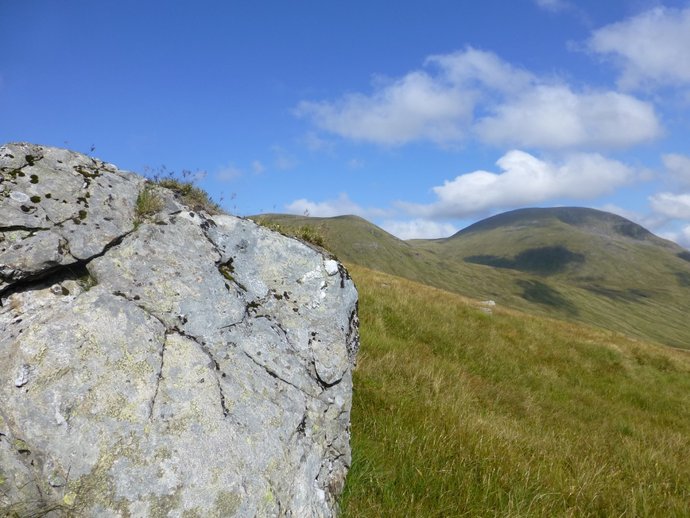 Between a rock and a hard place? Heading cross country to the Bealach Aoghlain

What a view to the crags on its northern face! 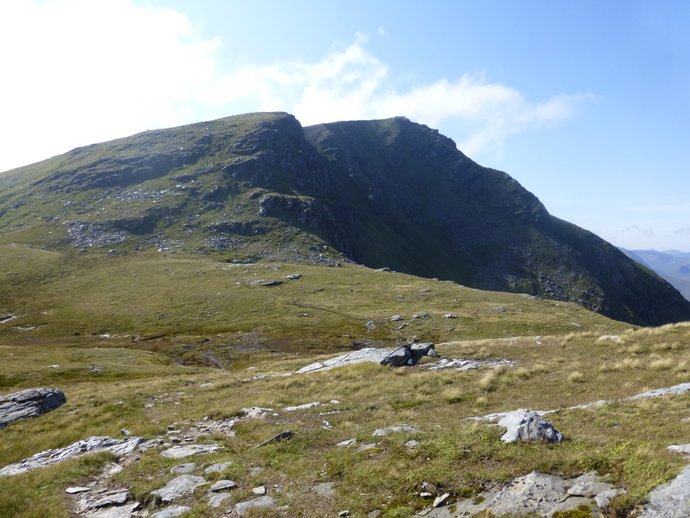 What a view across Rannoch Moor! First of all the Black Mount range to the left [presumably the Glencoe mountains are hidden behind it], then swinging round to Ben Nevis with the Mamores in front and the Grey Corries to the side. 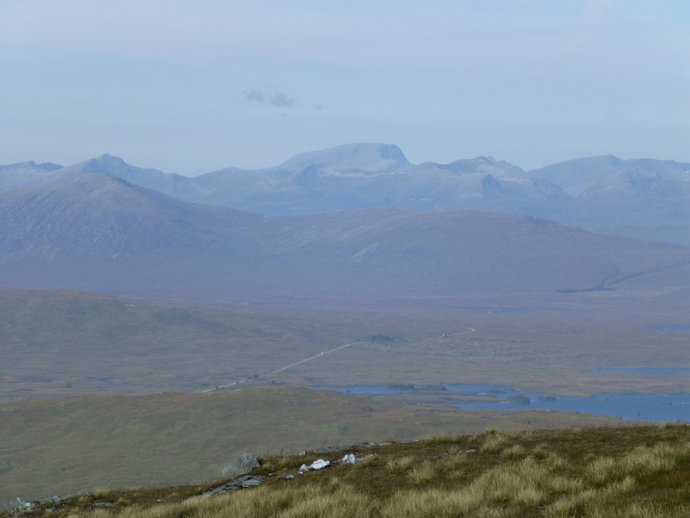 And round to the right to Ben Alder and its friends. Wow!
A nice airy edge walk followed, over the Top of Meall Buidhe 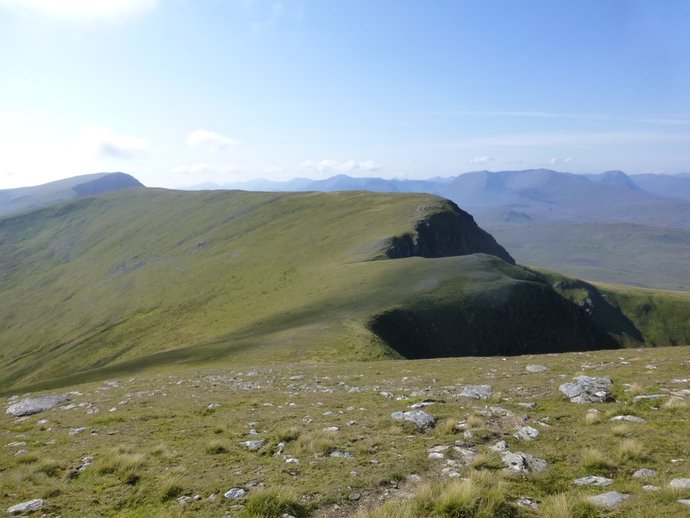 Why does the path not follow the edge? The views were amazing!

and winding round to the summit on Beinn a' Creachain, our second cloud-free munro of the day! Really happy with that. 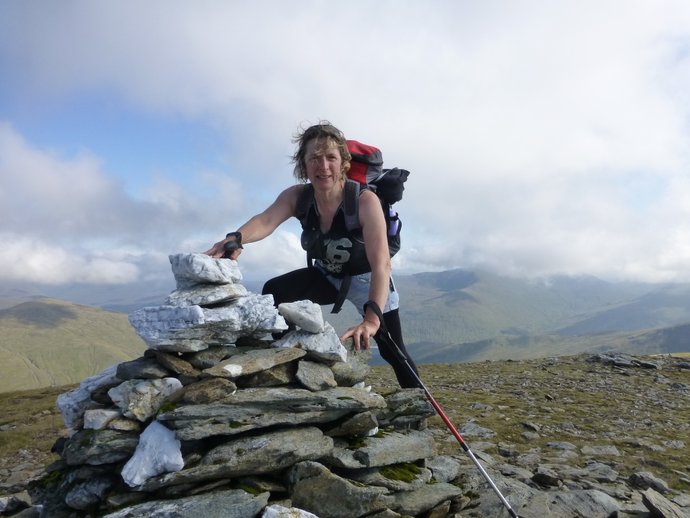 Whoop! Another one ticked off - who's counting?!

The guide books had waxed lyrical about the hidden beauty of Lochan a' Creachain, and it was twinkling invitingly in the afternoon sun as we dropped down into the coire. 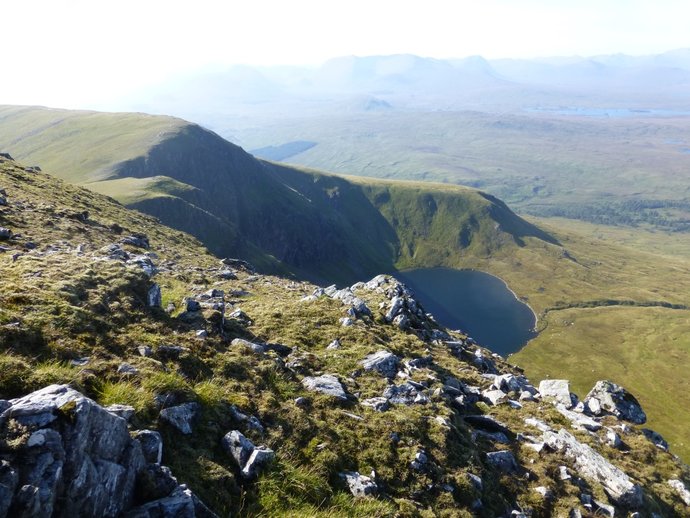 Away from a pleasant breeze on top of the mountains it felt pretty warm heading down into the valley. Another lovely burn to follow, although the route down to it and beside it was pretty boggy. The remnants of the Caledonian forest lower down were majestic, and it was good to see woodland regenerating where the forest has been fenced off. 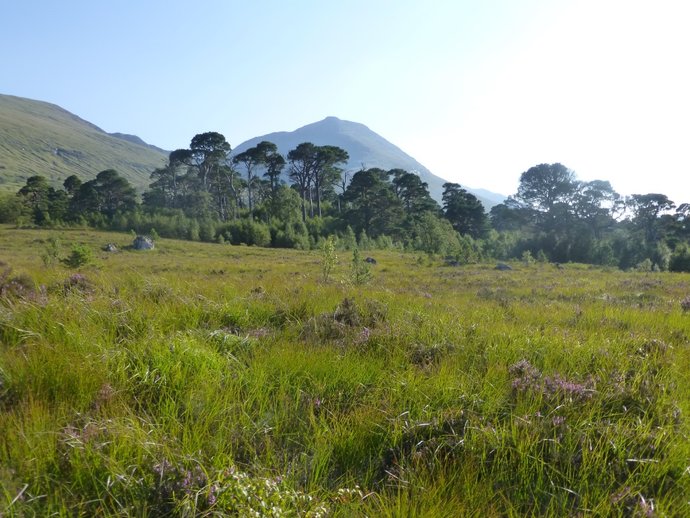 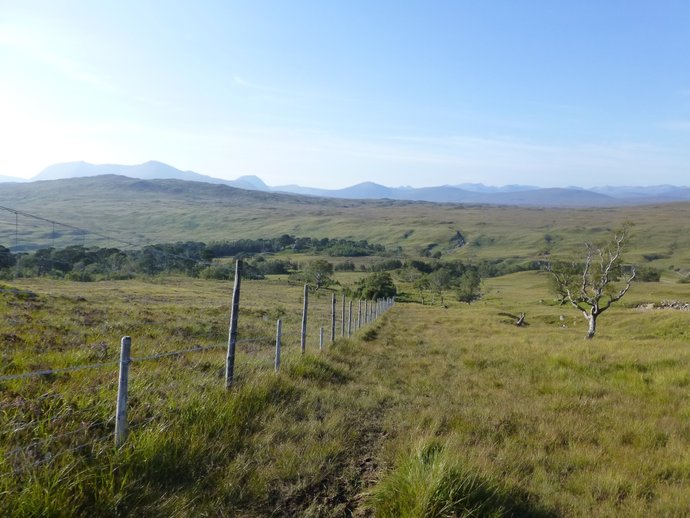 As we dropped lower down the hill Rannoch Moor seemed to rise up to meet us, and you got a sense of the scale of it, and how difficult it would be to make your way across it. Even though we were heading for signs of life - a recognisable track, and the railway line - it felt like we were on the edge of civilisation....am I being over-dramatic? 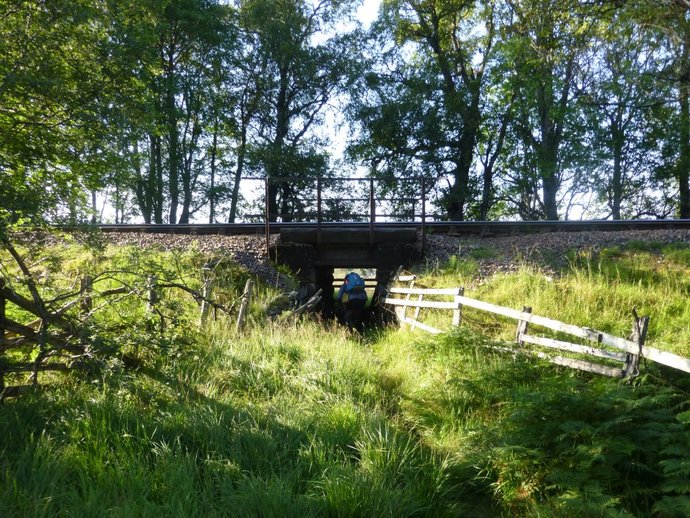 It had been a long day!
Quite a long tramp back along the valley bottom but into the evening sunshine, with gorgeous views all the way back of the wall of mountains we'd been on,

til finally Achallader Farm with its distinctive ruined tower came into view. The farmers were out baling hay. 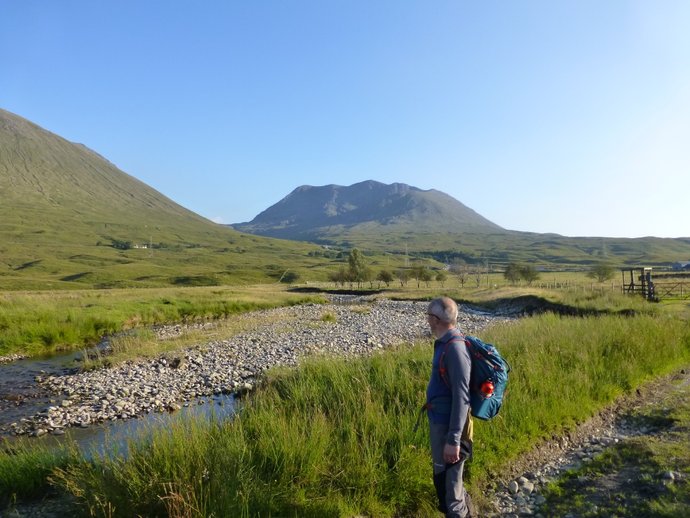 Nearly back at the beginning!

A pity the car park's been moved further west - I was ready for the finish by now but it had been a great circuit and I'd certainly recommend that route to get to Mhannach - as long as the clouds stayed away. 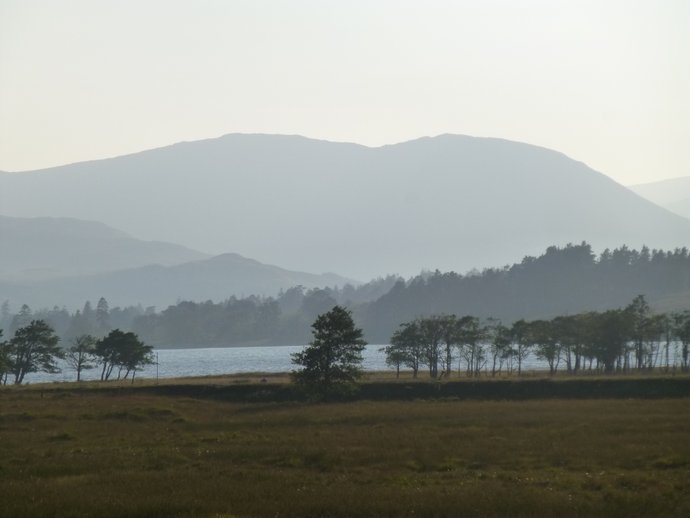 who doesn't like an arty horizon shot at the end of an amazing day?

Happy to finish by running the gauntlet of the midges and see the inside of the Bridge of Orchy Hotel!

Re: Not a bad way to find Beinn Mhanach