The Brack and Cnoc Coinnich from Lochgoilhead

The Brack and Cnoc Coinnich from Lochgoilhead


All the trip reports I have seen for the Brack start at Artgarten – this one starts from the other end in Lochgoilhead (largely because that is where we live) and takes in Cnoc Coinnich (which is 1m off being a Corbett) as well. The route we took back on this one was a big mistake as it involves walking several km over an extremely boggy, pathless and uninteresting wasteland – a better idea is just to retrace the route out.
We set off from our house outside Lochgoilhead about 8am. The cloud was about 600m as seen on Beinn Bheula straight ahead. If coming from the centre of the village, park in the Arboretum carpark, and then follow the signs for the Cowal way/Donich circular. Follow a forestry road up to a stile with a signpost for Glen Donich to the left. 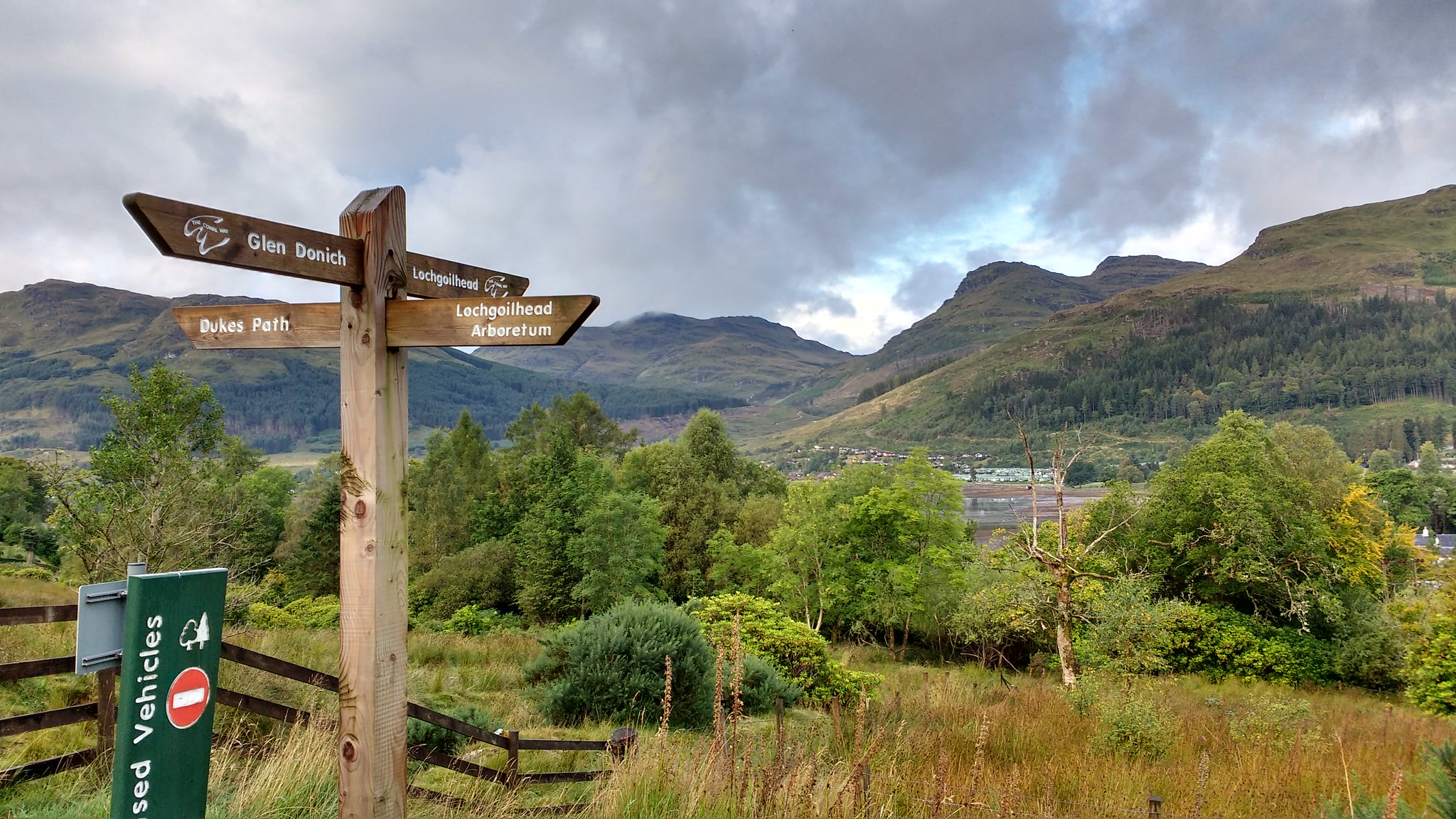 There are generally some heiland coos here but they must be the friendliest and most placid coos ever – one of them was scratching an itch this morning. 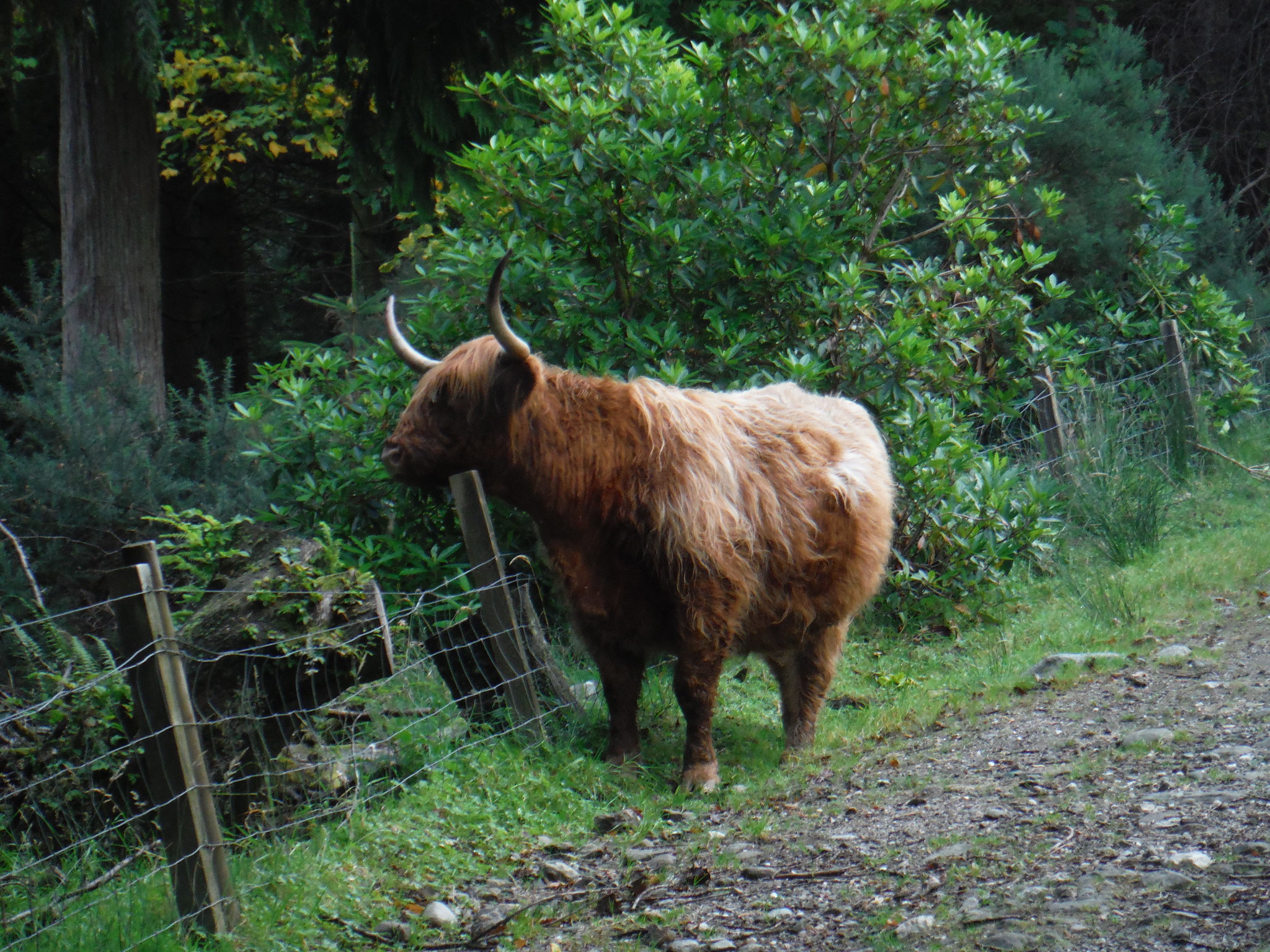 Turn left here and follow the track up towards the Donich waterfalls, crossing another stile. The hill to your right is the Steeple, and this is where our circular route re-joins the path on the way back. At the waterfalls, turn right and go up a steep path marked for Coilssean Glen, which after a short period of time stops being a proper path and becomes a firebreak between trees. After a very dry week here it was only moderately muddy – if it has been wet at all this area is a mud bath. 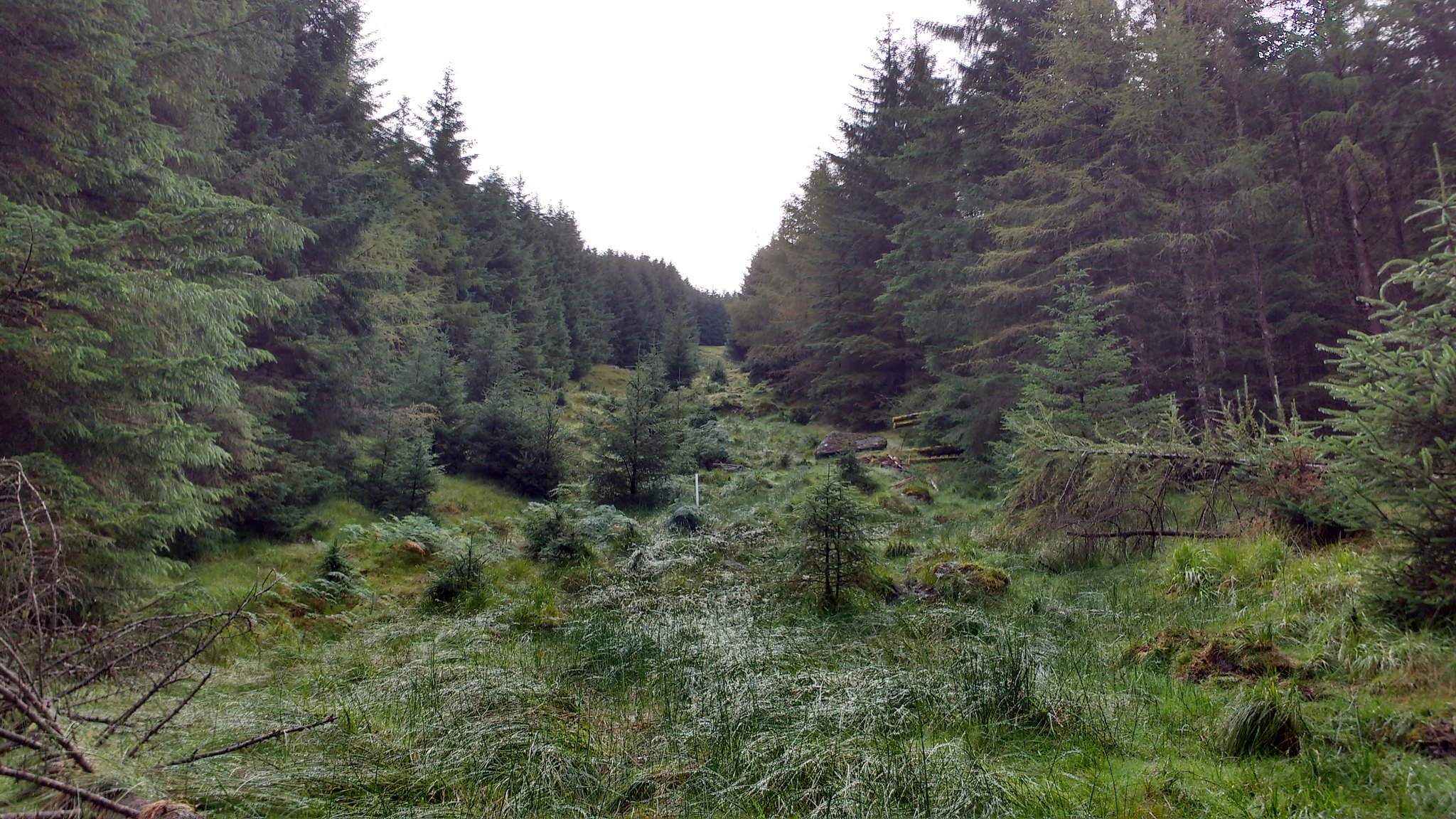 Continue out of the trees, over a stile and continue to follow the Cowal Way upwards – there are occasional white marker posts and good views back to Lochgoilhead. 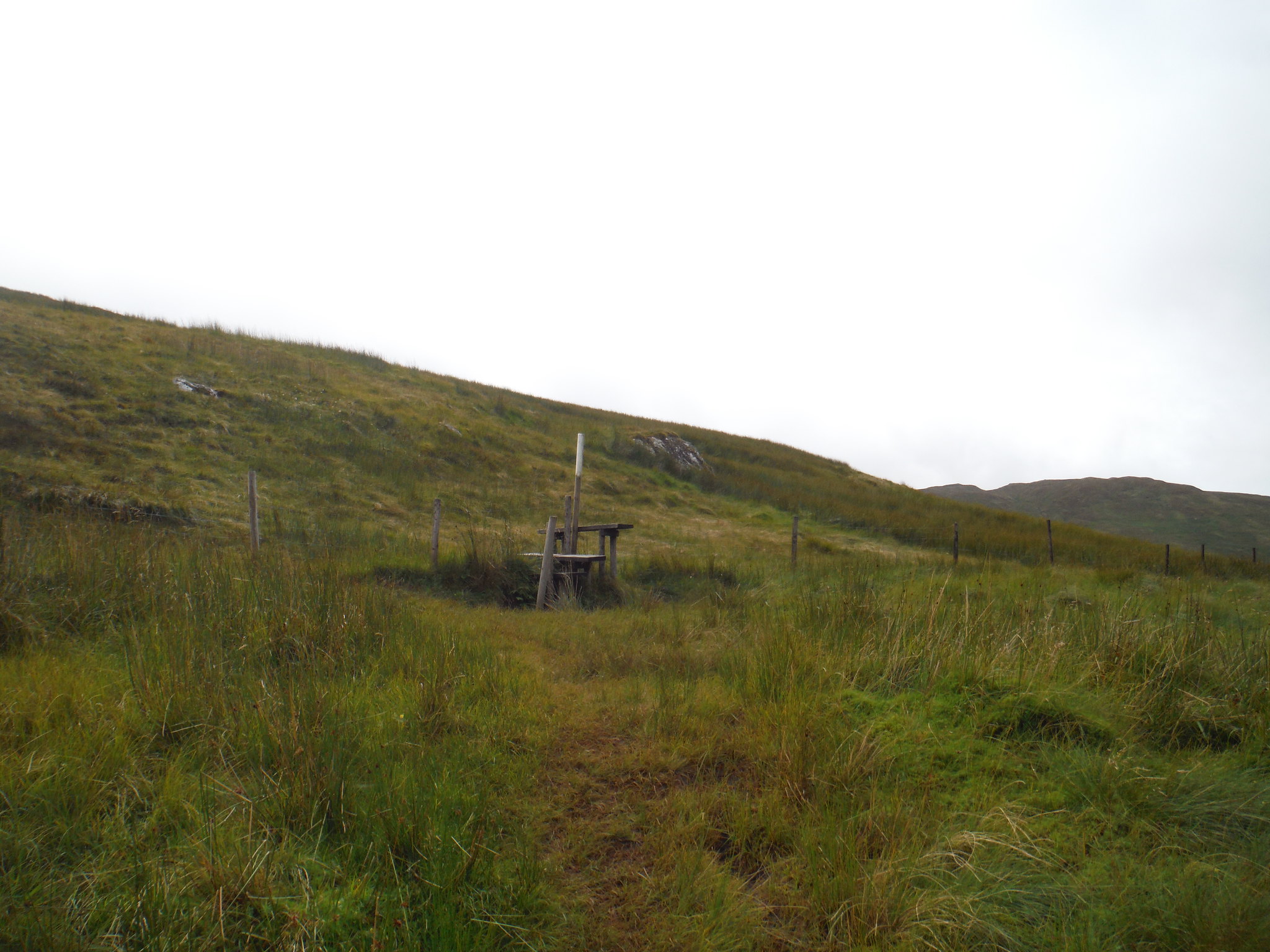 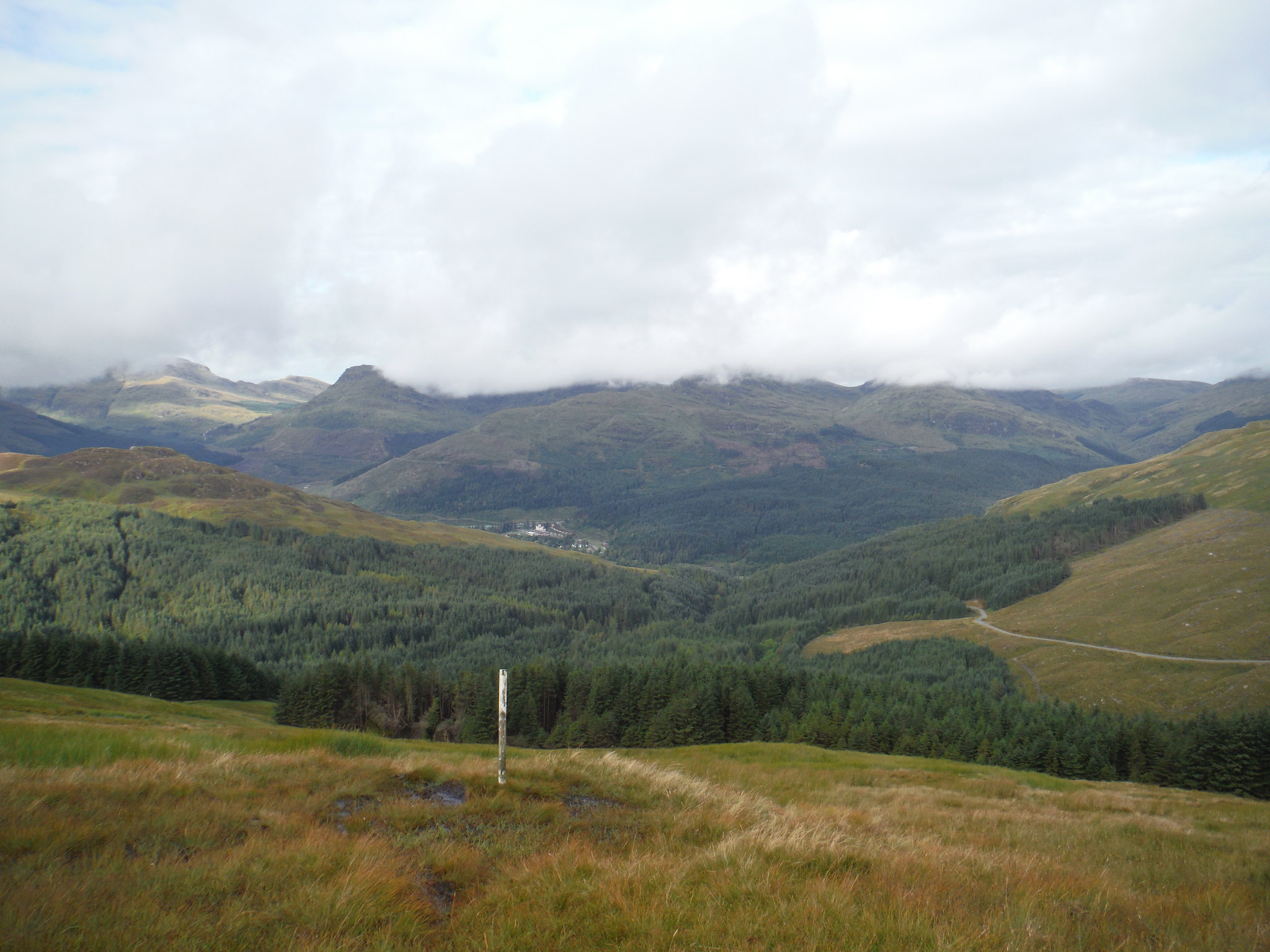 About halfway over the bealach, the Brack is visible to your left and Cnoc Coinnich to your right. 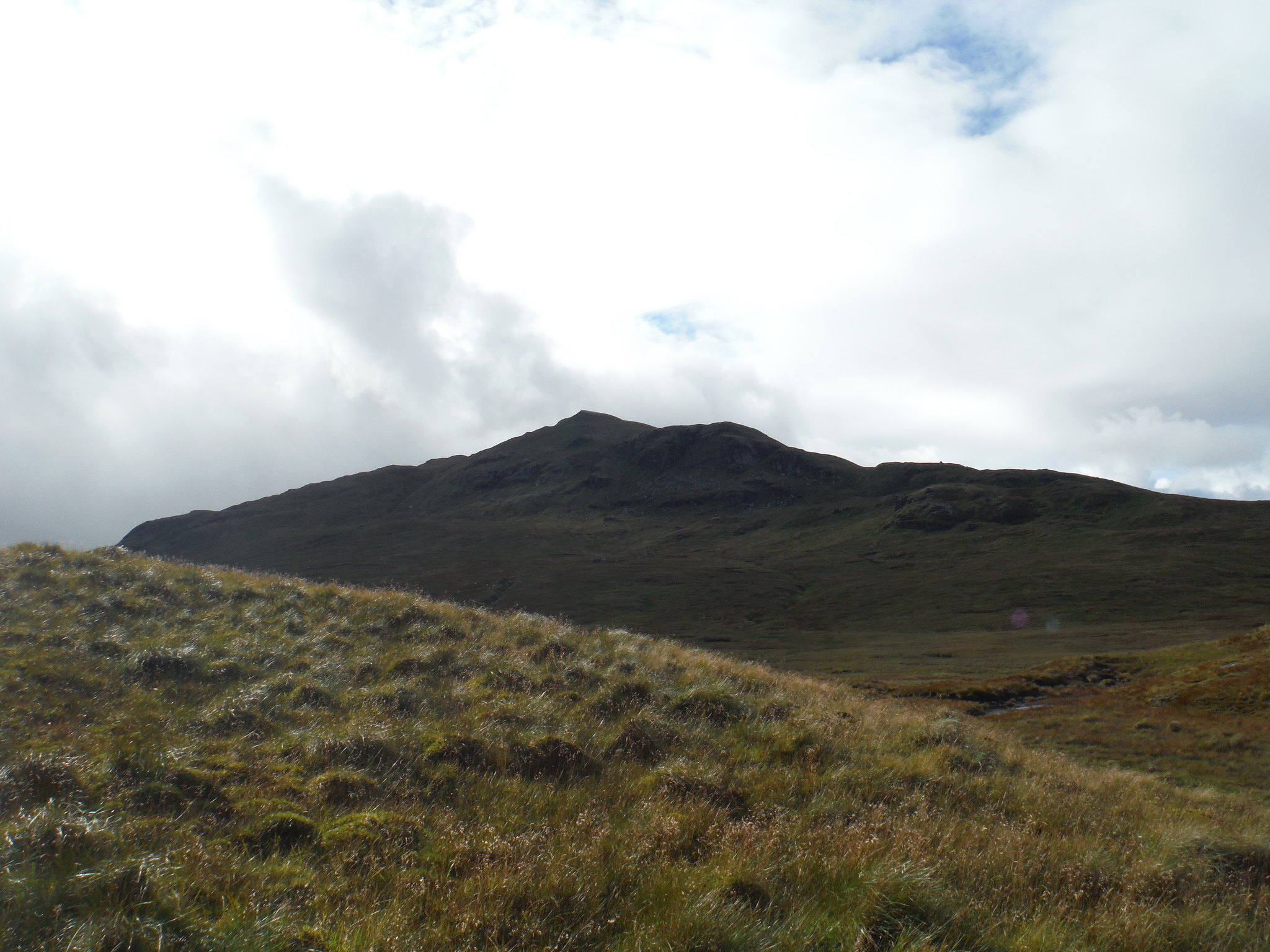 Turn left, leaving the Cowal Way and after a short period of time cross a fence (no stile but no barbed wire). Now basically head straight up towards the summit of the Brack. There are several small streams and very marshy areas with no defined path – some sections are also very steep. In bad visibility it would be important not to drift too far to your right as that side of the hill is pretty craggy. By this time today the cloud was lifting considerably, with only the summits of the higher hills covered. There were excellent views out to Garelochead and Loch Long, with the huge bulk of Beinn Donich to the left and the Cobbler straight ahead. The Brack has several false summits; when you reach a small Lochan, the next summit is the real one. 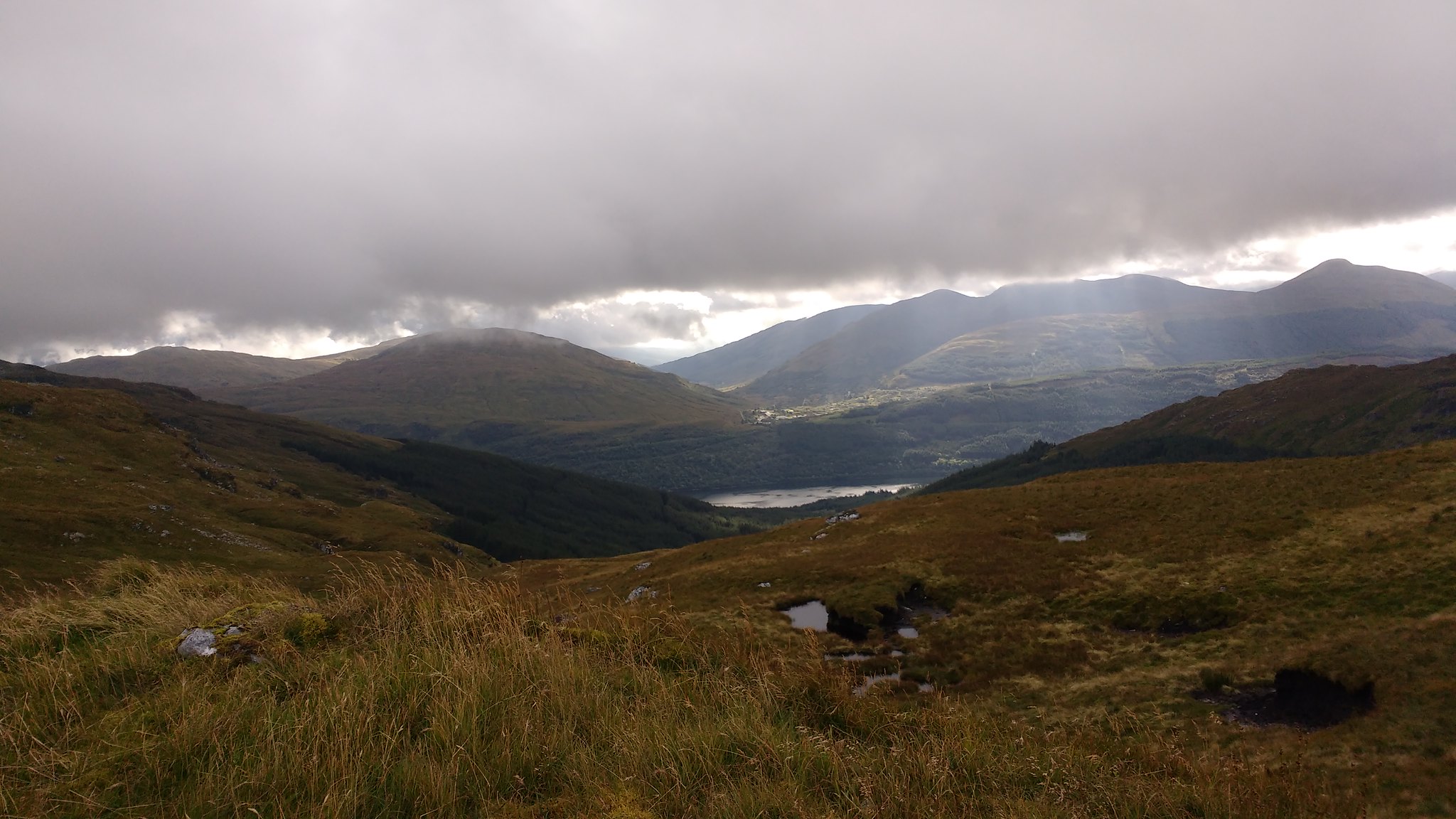 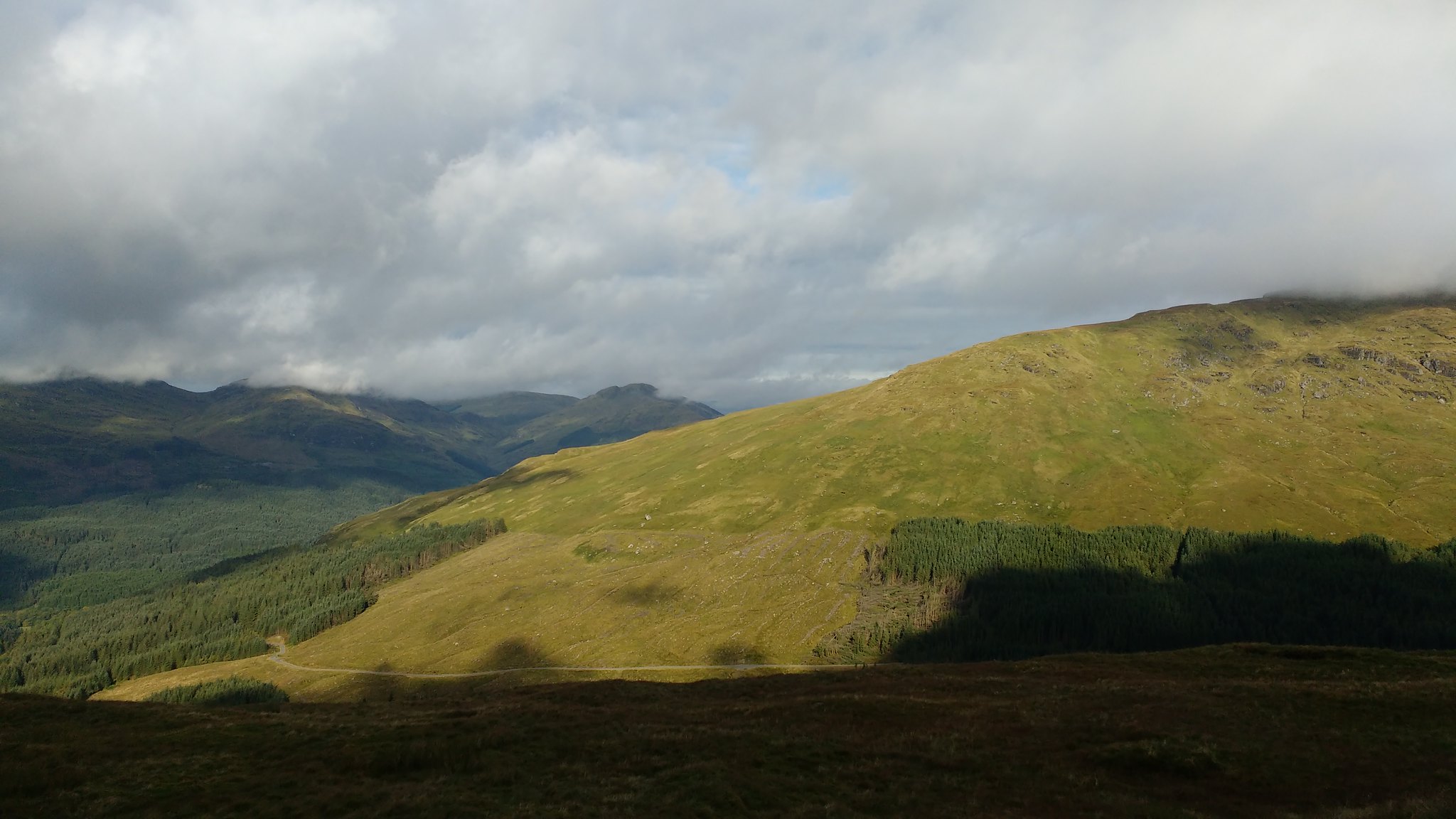 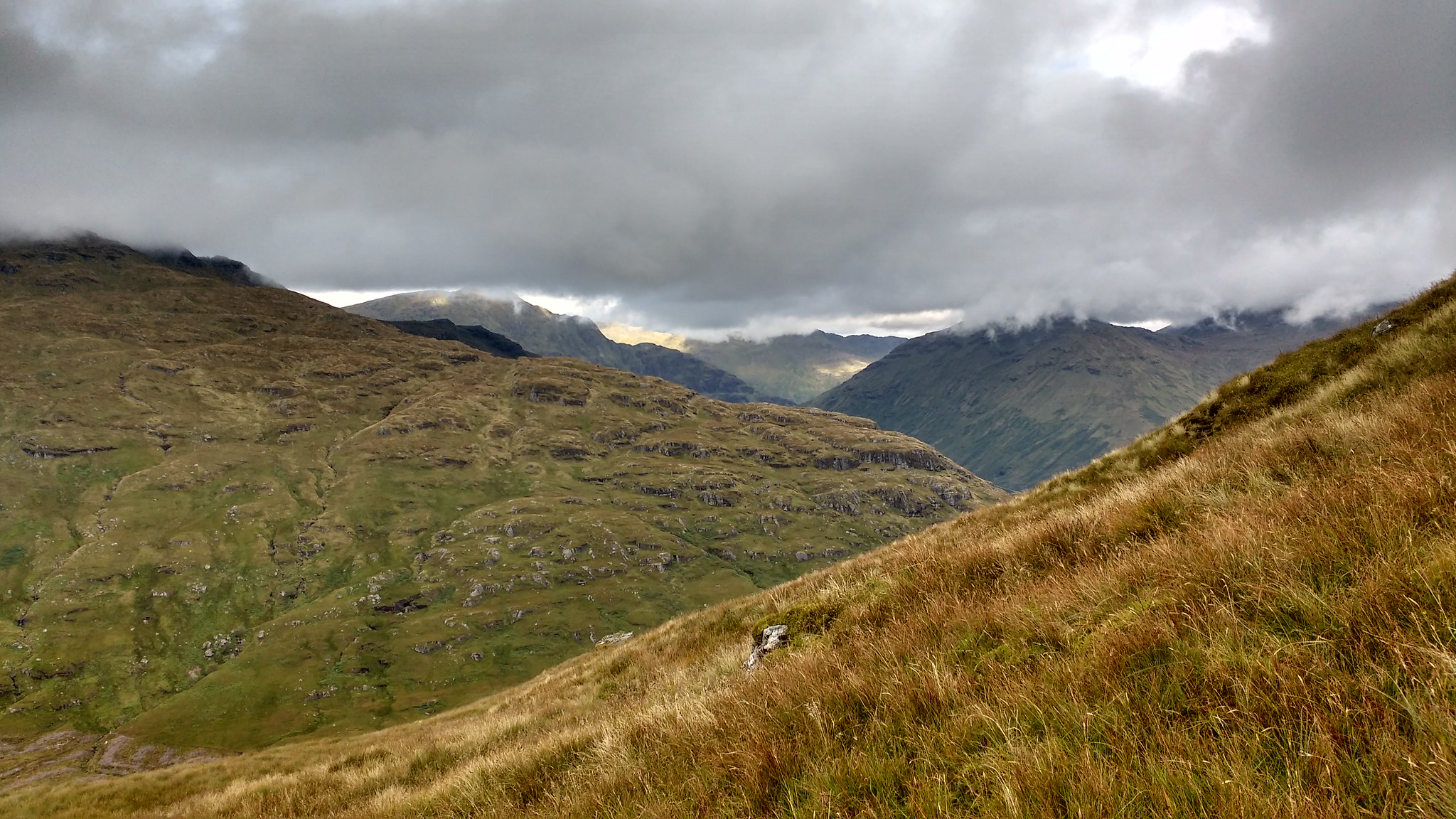 Unfortunately, the cloud rolled in at this point and we didn’t get any views from the top, so after waiting in vain for a few minutes for the clag to clear, we gave up and headed for Cnoc Coinnich. 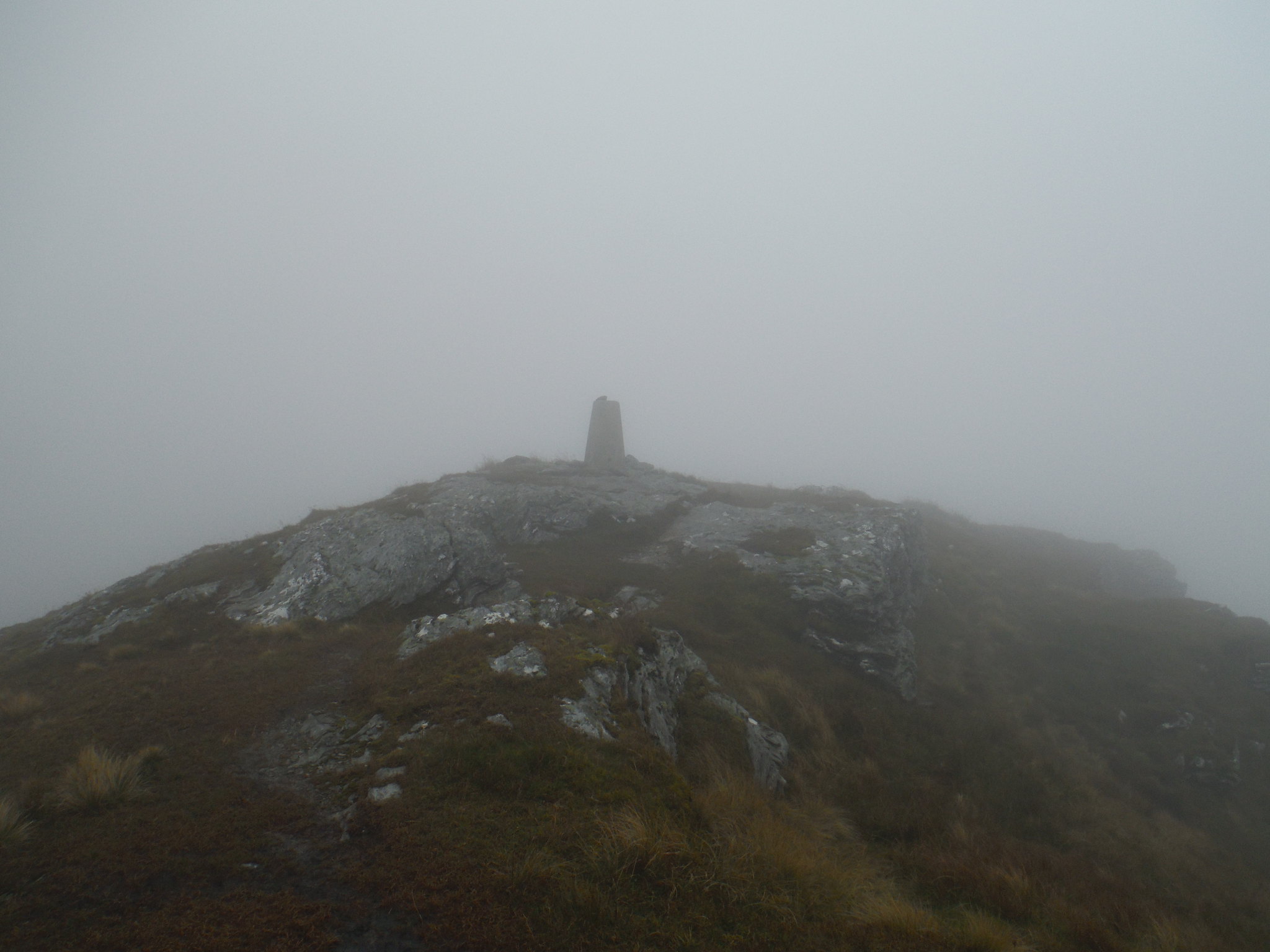 This hill used to be classed as a Corbett but was remeasured and found to be 1m short, so it was reclassified as a Graham. It is clearly visible ahead and to the left as you come down the Brack, so bear straight towards it, crossing a major path at a cairn and skirting to the left of some craggy outcrops. The best views of the Brack are now behind you, as from this direction you can see the real summit. 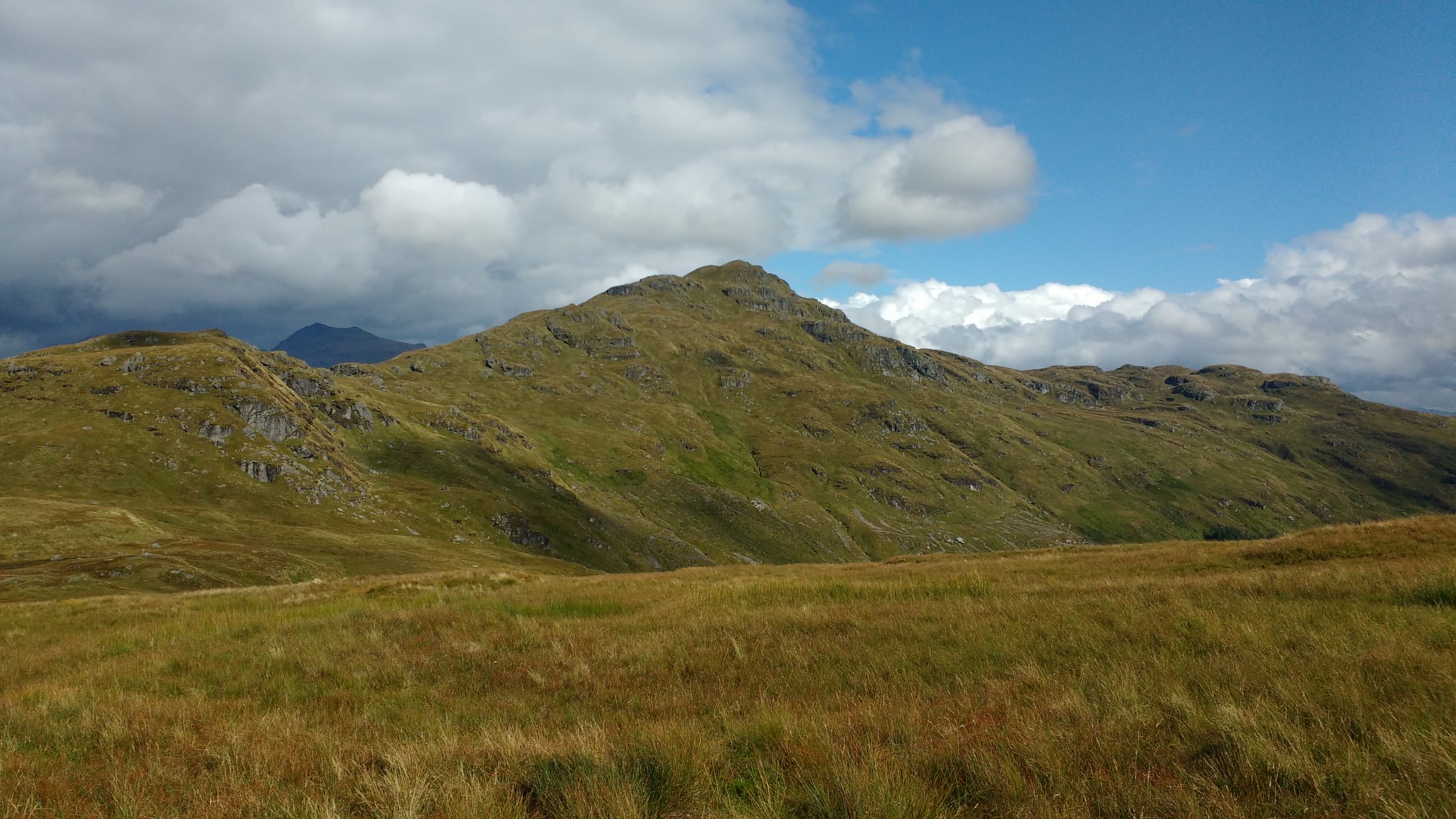 Cnoc Coinnich is not a complicated hill so basically you can see the summit from the bealach and you walk straight up a steep grassy slope to it. There is no triangulation post, only a small cairn (very tempted here to make it a bit bigger and see if we can turn the hill back into a Corbett). 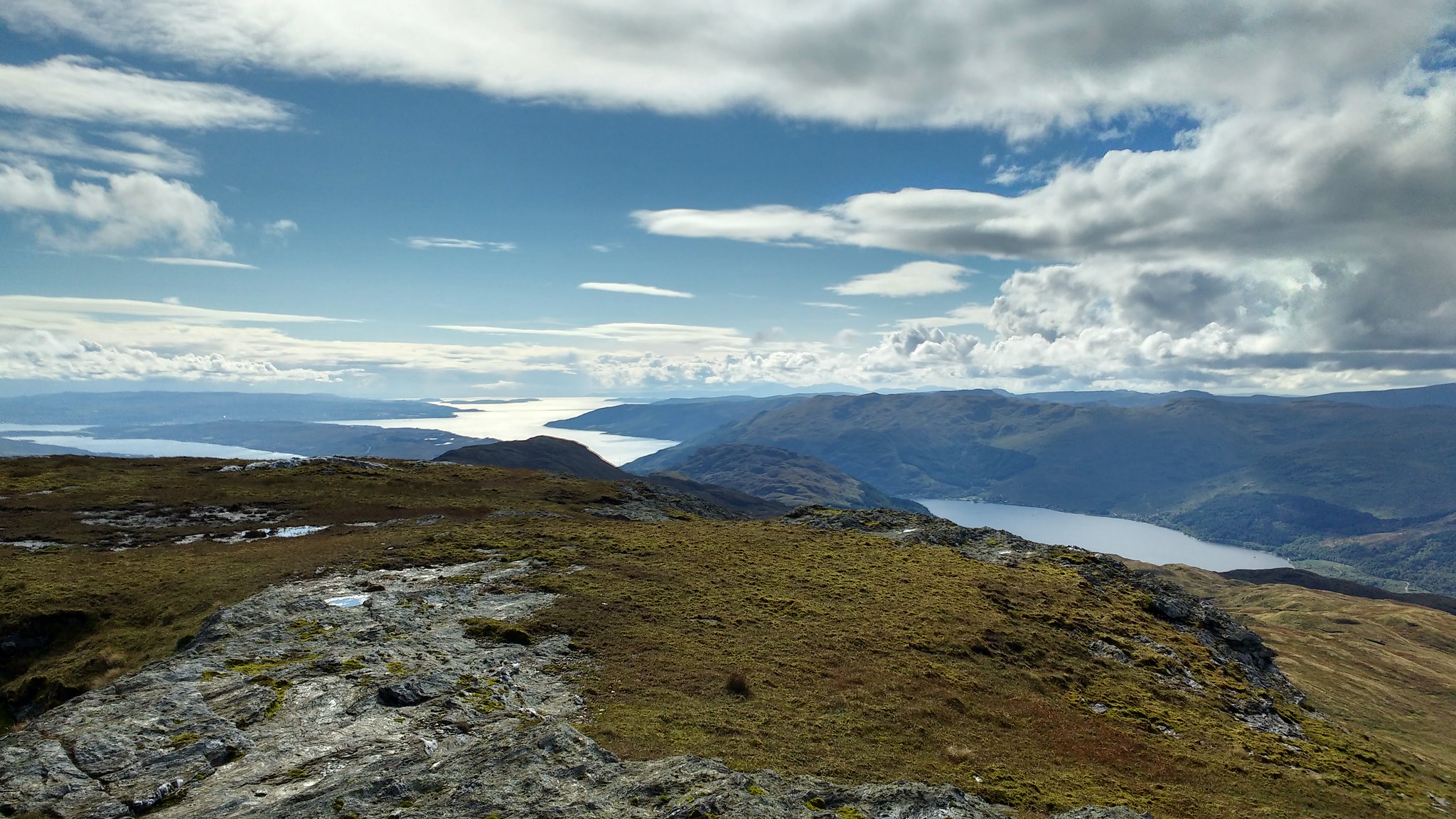 Today it was well worth the extra effort as the views were superb. In the distance Ben Lomond was doing a good impression of the Lonely Mountain in the Hobbit, first with a few clouds around the summit and then clearing as we watched. Loch Goil and Beinn Bheula were to the right and straight ahead we could see all the way out to Arran. Behind us we could see many of the big mountains of the Arrochar Alps. 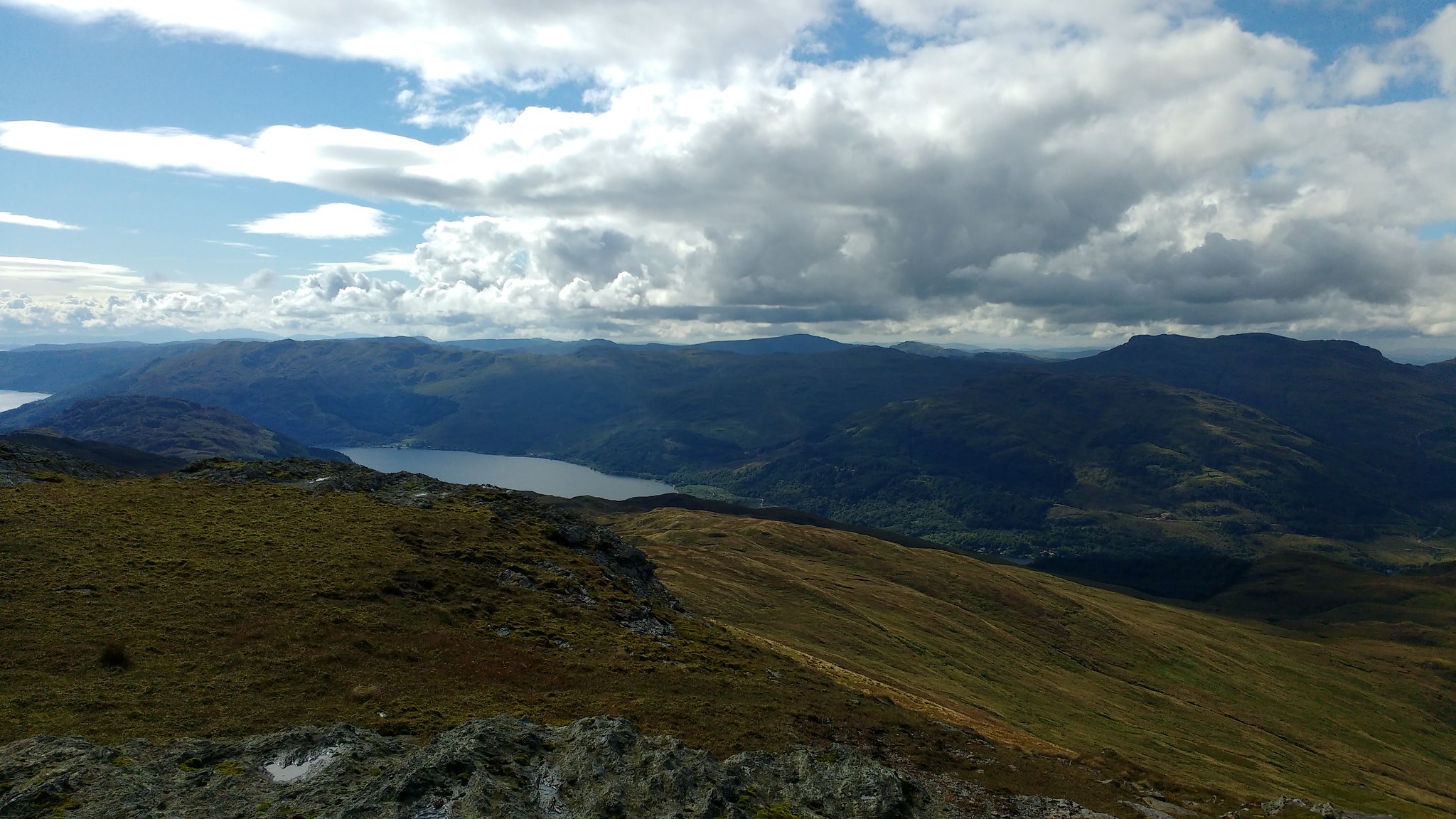 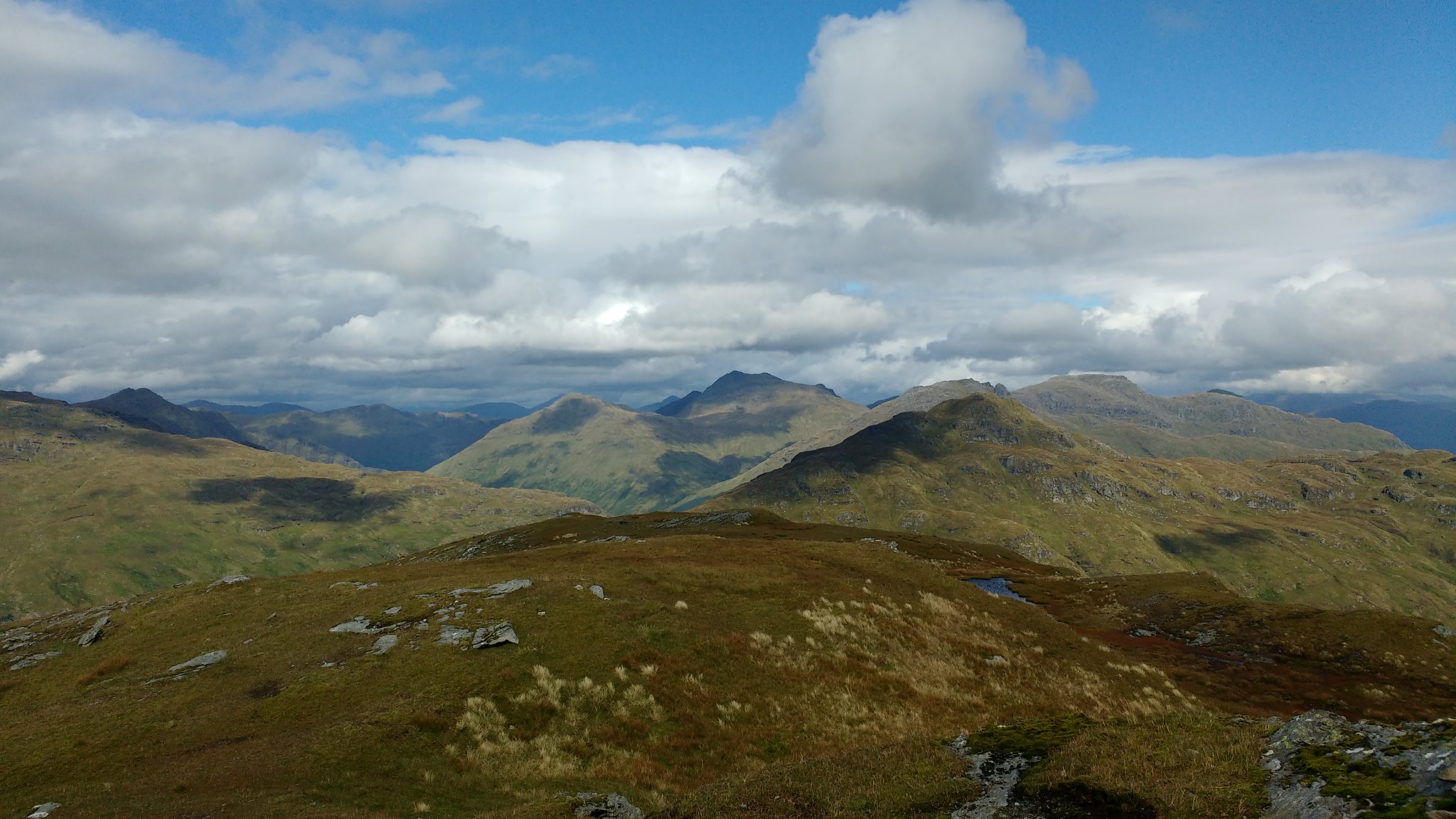 To this point we had had a great day. It was nearly 2pm and we were getting a bit footsore, so we should just have re-traced our route of the morning. Instead we decided to go down the west side of Cnoc Coinnich, skirt round the back of the Steeple and re-join the path we left that morning. This is possible, but as we found out, it is neither quicker nor a pleasant walk.

If you do want to go this way, walk down the mountain bearing left towards the Steeple and Loch Goil, but keeping as much height as possible as there are no less than five streams running down towards the Donich waterfalls. 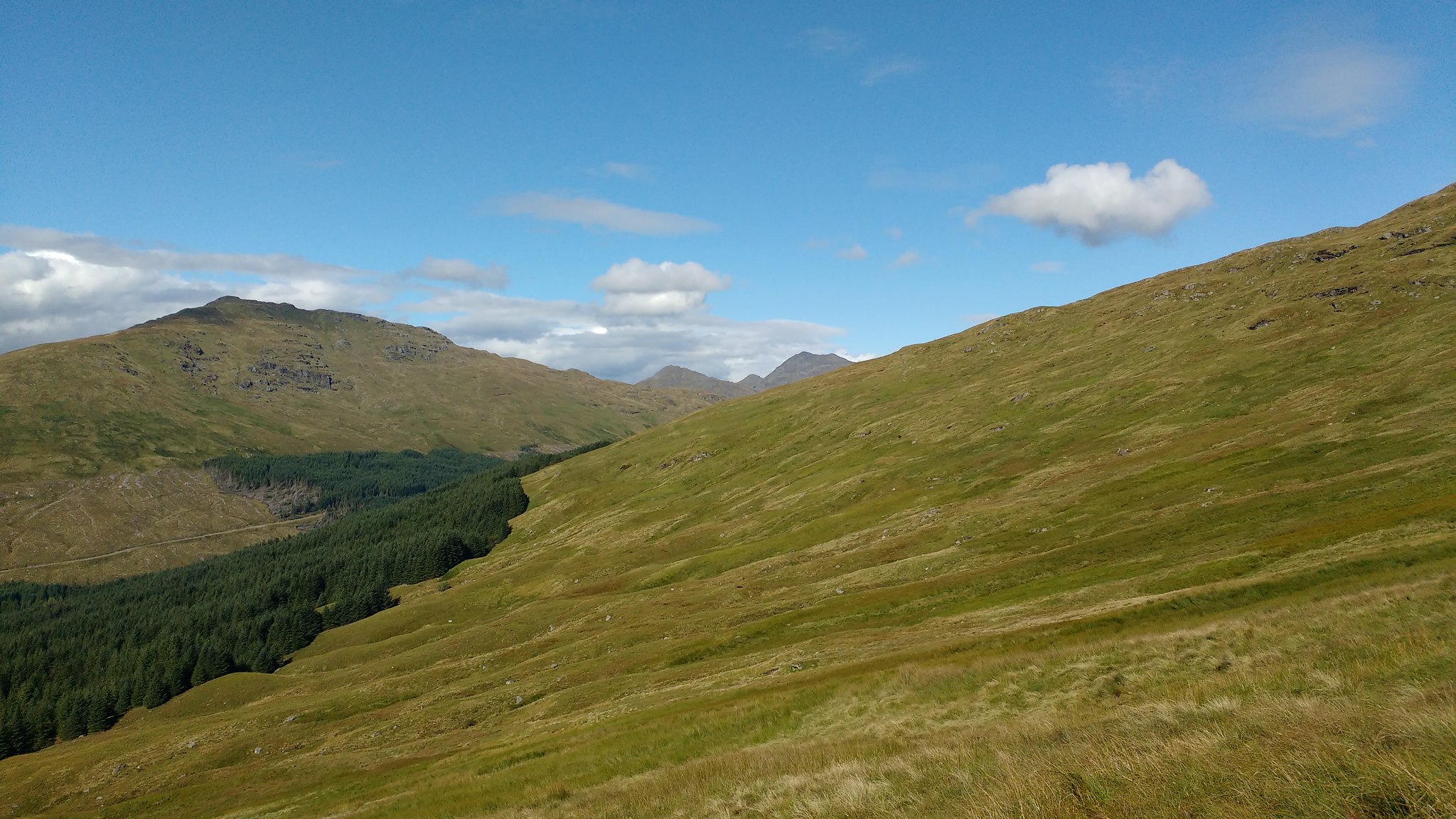 Then cross a large field of swamp and swamp grass, watching out for the many invisible streams, holes and boggy places. Eventually you will come to a rusty piece of abandoned farm machinery and the start of a track made by a farm vehicle. Follow this through lots of mud to a fence skirting forestry planting. 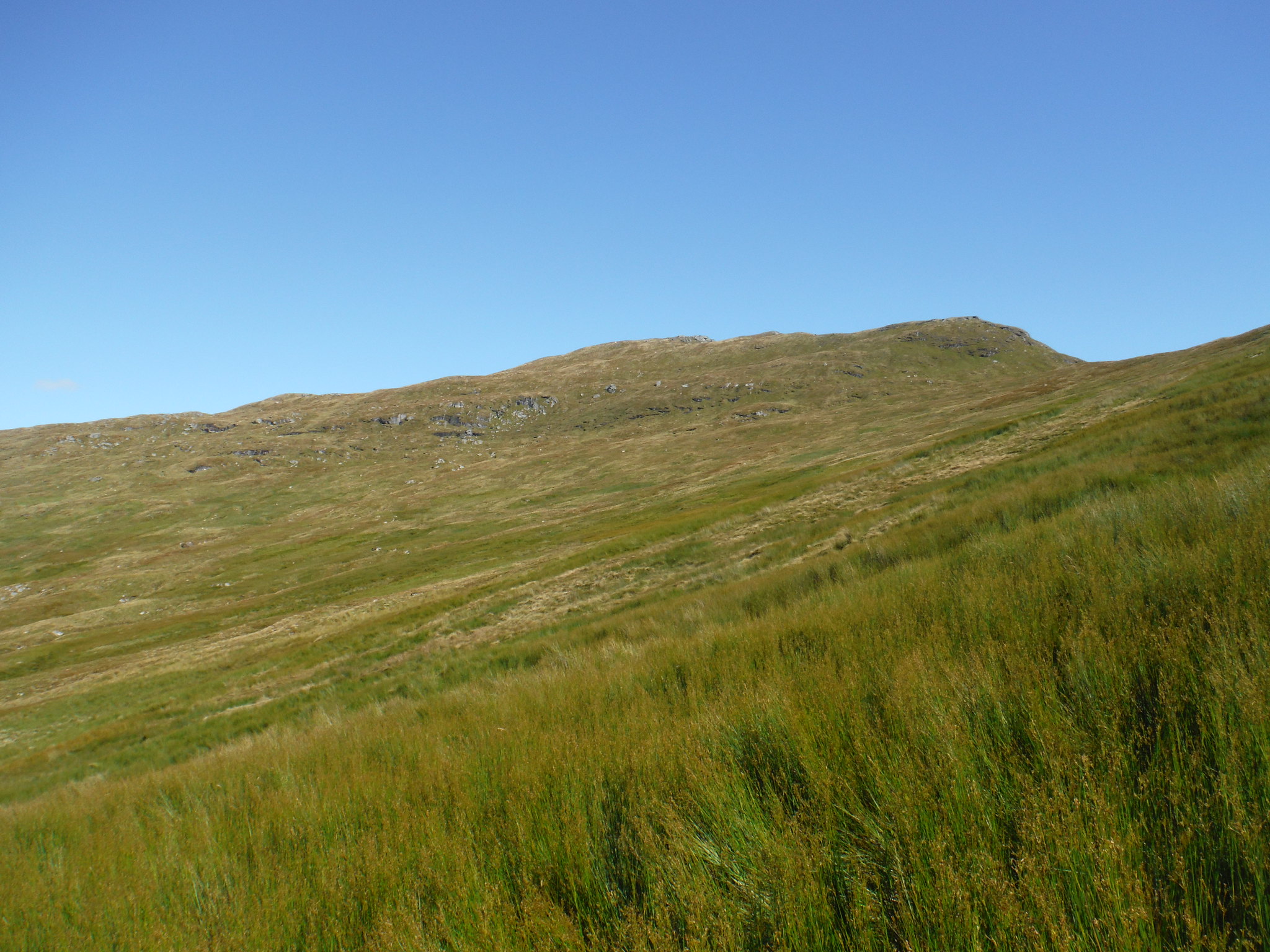 At this point the swamp turns to heather and swamp and the going gets even more difficult – by this time we were cursing ourselves for coming this way but it was too late to go back. Eventually (and I mean eventually) you pass round the back of the Steeple and join up with the same path you started on. Turn left and you are back in Lochgoilhead in fifteen minutes or so.
It occurs to me that another alternative route back would be to avoid the marsh by staying high on the ridge and actually going over the Steeple. Although it isn’t a high hill there are lovely views of Loch Goil from it and there is actually a proper path from about a third of the way up (again this joins with the Donich waterfall path).
Apart from the last hour, we had a great day on these two hills, with Cnoc Coinnich actually being the nicer of the two in my opinion.

track(1).gpx Open full screen  NB: Walkhighlands is not responsible for the accuracy of gpx files in users posts

Users browsing this forum: Alan B and 93 guests