Sunshine on a rainy day - nearly

Sunshine on a rainy day - nearly

When we set off our hopes were high that the forecast "early morning cloud clearing by mid day" had cleared sooner and perhaps we were in for a cracker.

There were times during the day when it was pleasant but unfortunately by the time we reached the high ground things were turning for the worse and cloud and drizzle tried to deter us. Not a chance after the battering we took on Saturday!.

Some of the photos show the stark contrast between being below cloud level and just above it. If anyone is in any doubt about what gear you need for summer in the Scottish hills the answer is "all of it" and don't ever forget that.

As cloud whisked past to be replaced by more we sometimes were teased by glimpses of the views that might have been.

The path up this hill is superb - like a staircase and congratulation to those who obviously worked hard to install it.

On the way back down the weather had the final laugh as the tops cleared and there were patches of blue sky and a bright yellow thing was sometimes visible. As the earth was not destroyed I can only assume that it was not an asteroid bringing calamity and destruction but a rare glimpse of the sun!

We were treated to another fabulous rainbow as we descended. The last 5 minutes before the car was almost a re-enactment of Saturday's battle of the midge. We are truly grateful that the little blighters did not launch a sustained attack all day because in 5 minutes they almost drove us mad - and before anyone else says it - I know that we are all half way there and for us the journey to madness isn't a long one.

Despite the weather - rain, wind and midge (Mary, Mungo and Midge springs to mind for some reason) we had another excellent weekend. 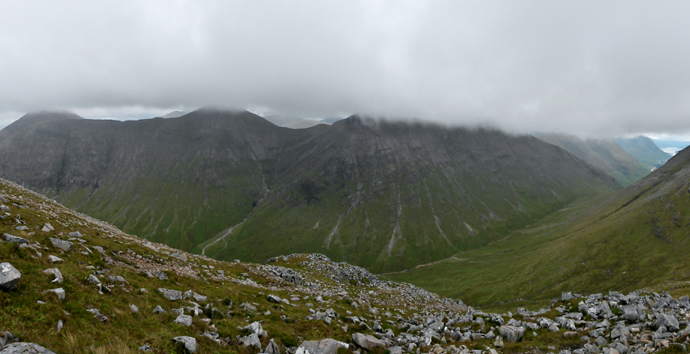 Stark contrast above and below cloud level. Looking towards Loch Etive in the distance. Stark contrast above and below cloud level. Looking towards Loch Etive in the distance.

Looking along the ridge to Stob Dubh

From Stob Dubh back towards Stob Coire Raineach

On the way down.