2015 09 07.gpx Open full screen  NB: Walkhighlands is not responsible for the accuracy of gpx files in users posts
On my second morning in a cottage near Laggan, I got up before daybreak. The first day and a half of my trip had been spent on the Monadhliath. Now it was time to take full advantage of the self catering facilities, with an early breakfast and a long day. It was a dark, cloudy dawn as I drove to Dalwhinnie, but the forecast inspired optimism. I parked near the station, and the East Highland midges were trying to out-do their more notorious western neighbours. But soon I had left them behind and was walking alongside a foggy Loch Ericht. 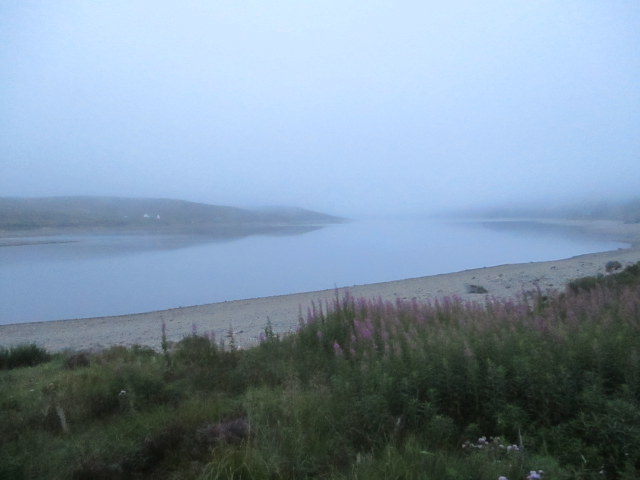 Loch Ericht in the early morning

Still in the fog, I moved past Ben Alder Lodge, and after a good long walk-in, I passed the closed (due to asbestos) bothy at Culra. Further on, after leaving the main path to head for the Long Leachas ridge and Ben Alder, I began to emerge from the inversion. Lancet Edge, and then Ben Alder itself, appeared above the mist. 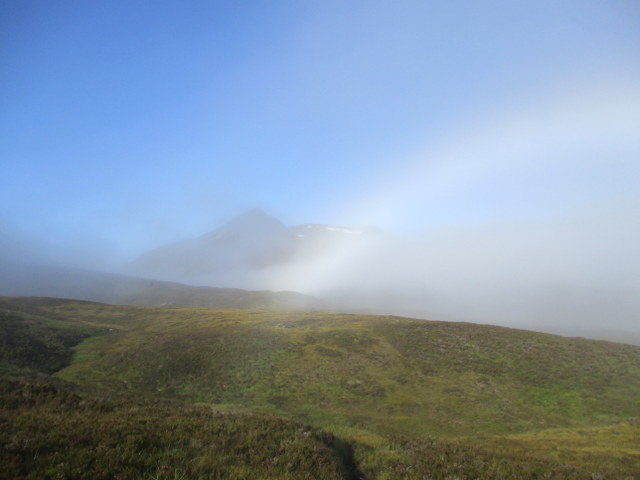 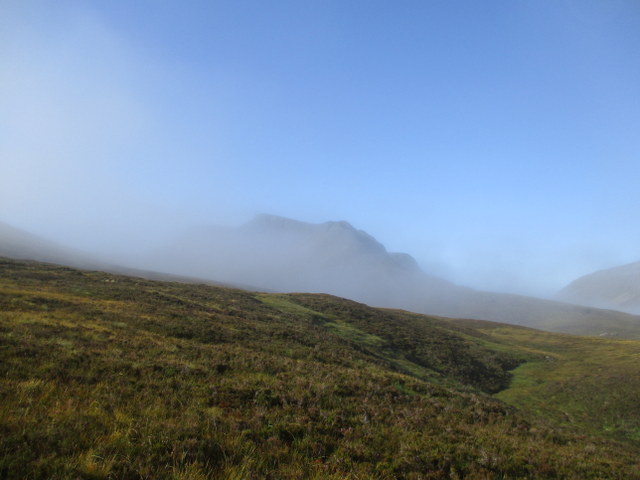 I crossed the Allt a' Bhealaich Bheithe and made my way towards the Long Leachas. 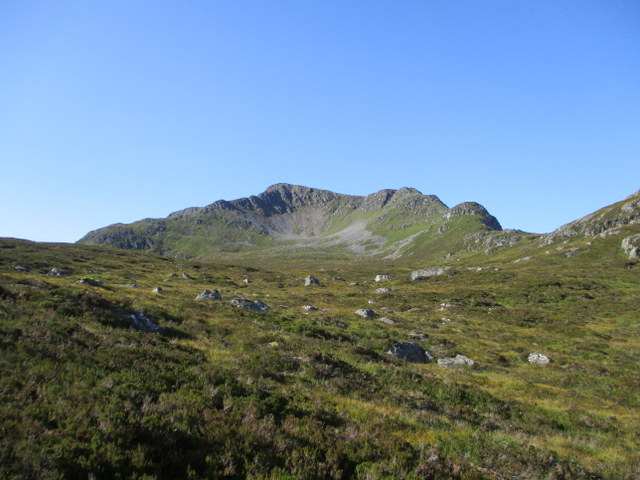 Heading for the Long Leachas 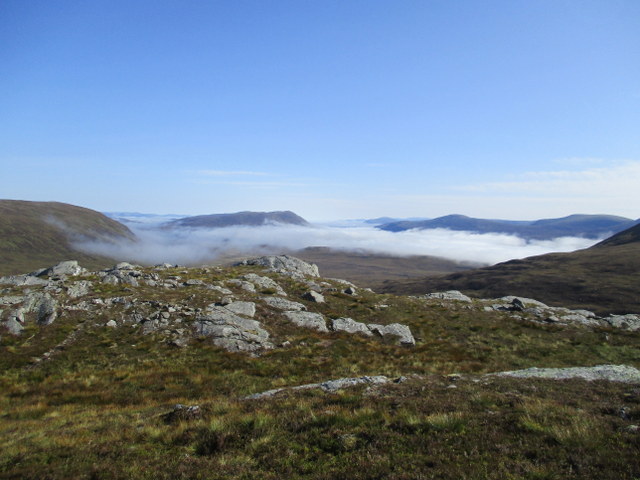 En route to the Long Leachas, looking back

On reaching the ridge, I met another walker. He'd stayed in the bothy which was still unlocked, happy that asbestos was only dangerous if disturbed. As I had a much greater distance to cover before evening, I was soon bounding up the ridge, as he followed at a more leisurely pace. 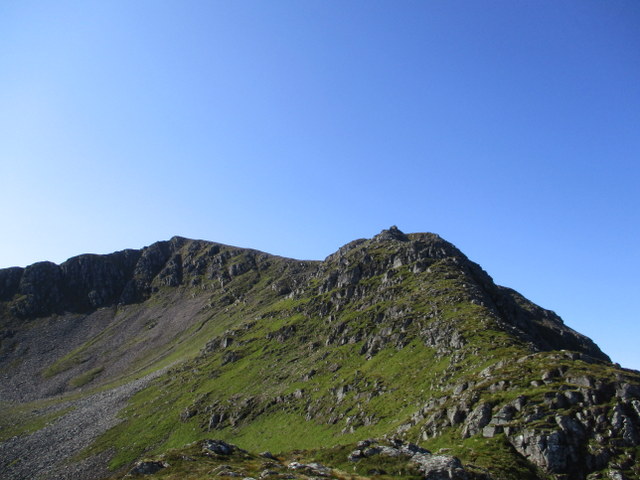 Moving up the Long Leachas

The Long Leachas was great fun: steep, but easy scrambling all the way. 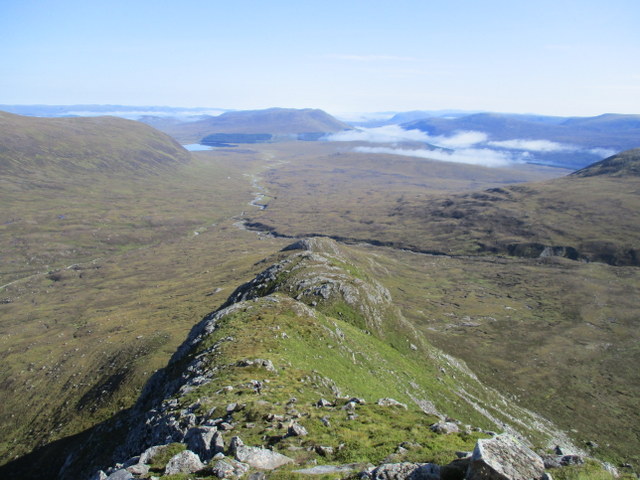 View in retrospect from the Long Leachas 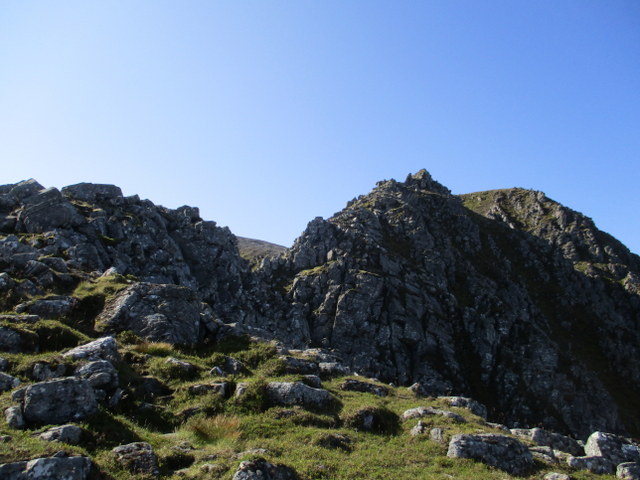 Further up the Long Leachas

In time I reached the plateau above Coire na Leathchois, and fine, clear views opened up to the west. 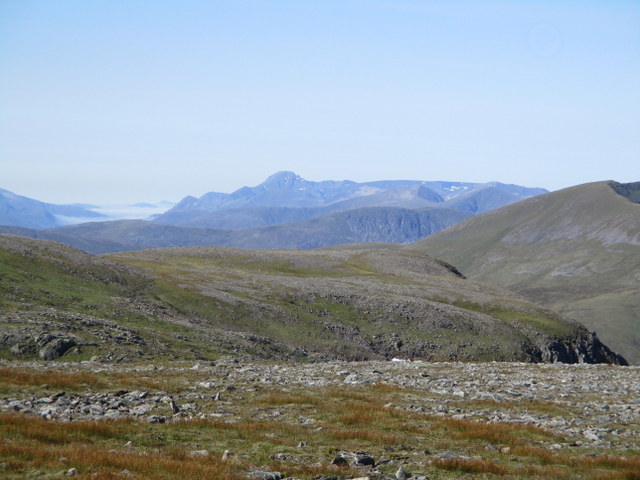 From this point, easy gradients led to the summit of Ben Alder, where I encountered another walker. It was sunny, calm and warm, and we enjoyed a magnificent panorama. 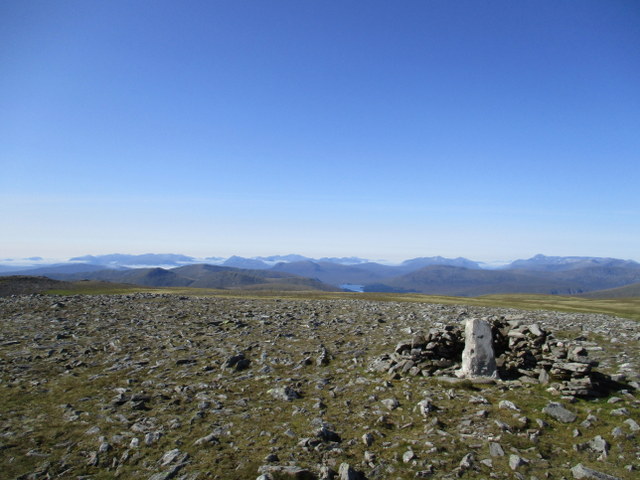 He had been wild camping in the area. When I told him I'd walked from Dalwhinnie that morning, he asked if I trained for marathons or something. I looked at the size of his pack, which contained his camping gear, and replied, "I not sure what's harder; walking in all the way, or carting all that weight up here!" After a few minutes the walker from the Long Leachas arrived. We said a quick hello again, then I was moving off to take on Beinn Bheoil. 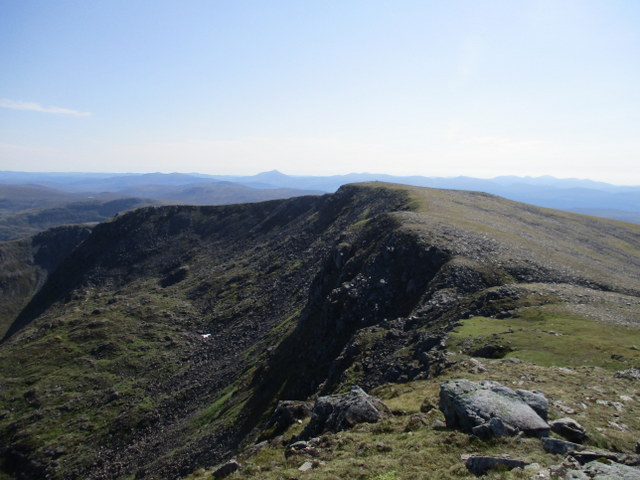 Moving around above Garbh Choire 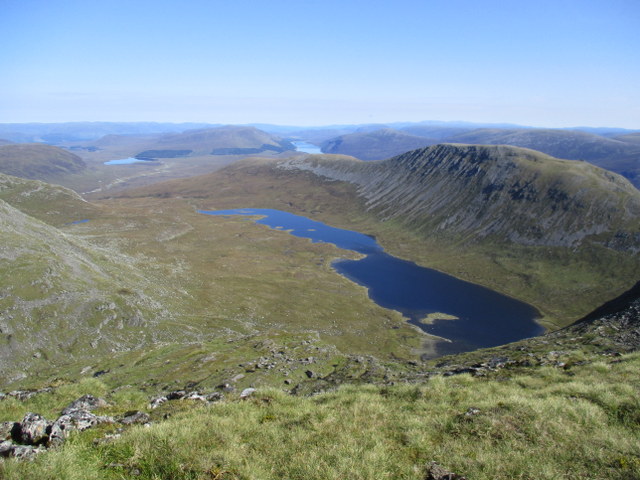 I dropped off the plateau SE towards the bealach, on steep grass with patches of scree, but nothing too awkward. 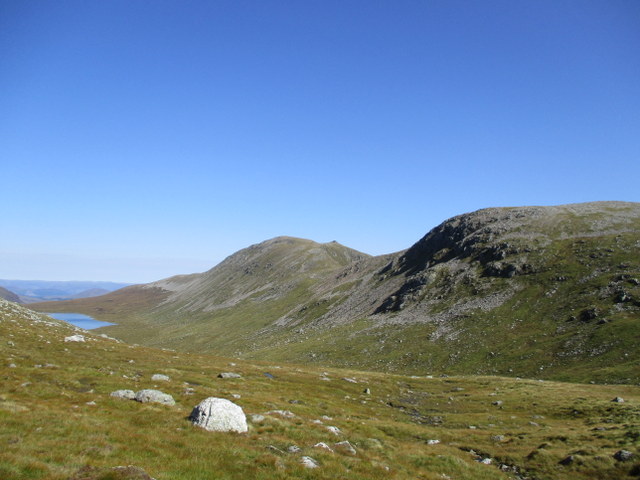 The bealach was passed, and I began to move up the broad SW ridge of Sron Coire na h-Lolaire, feeling a little tired now. 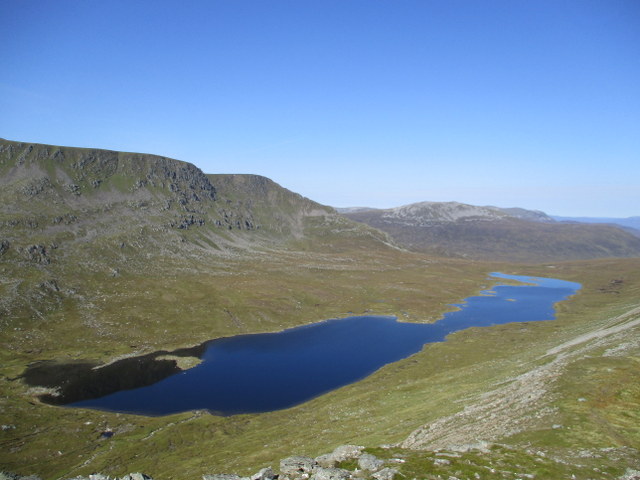 A slight descent followed before reaching Beinn Bheoil's SW ridge. Then came the push for the final ascent. This wasn't difficult, but on reaching the summit I felt somewhat fatigued, with the warm sun and no cooling wind. I wasn't going to complain about such conditions, though! There were lovely views... 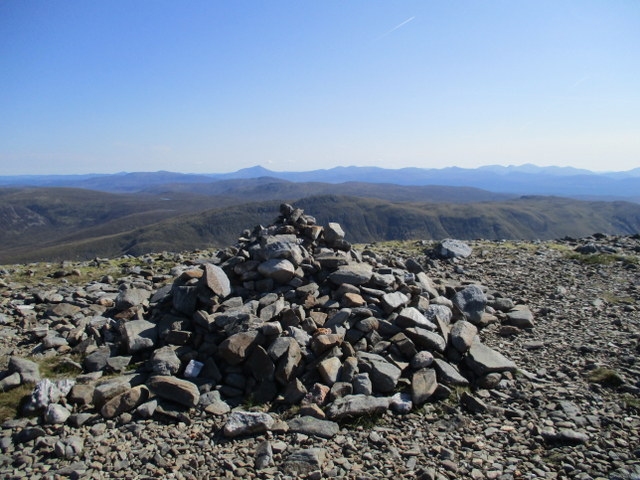 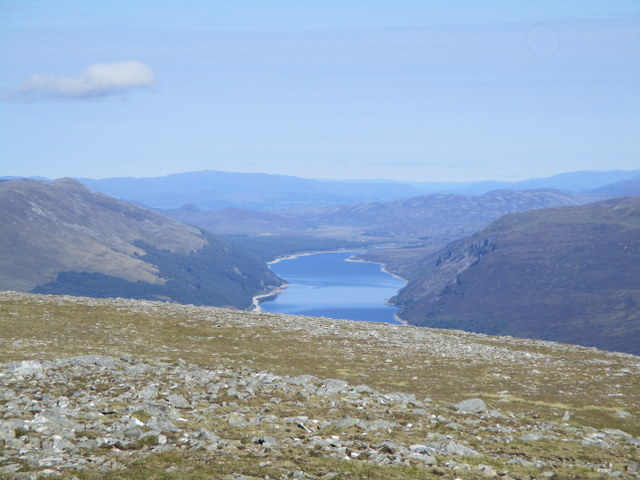 Loch Ericht and Dalwhinnie zoomed from Beinn Bheoil - doesn't look so far, does it?

...and I was soon sorted after a short rest. So I began the descent in good spirits, continuing to admire the spectacular scenery. 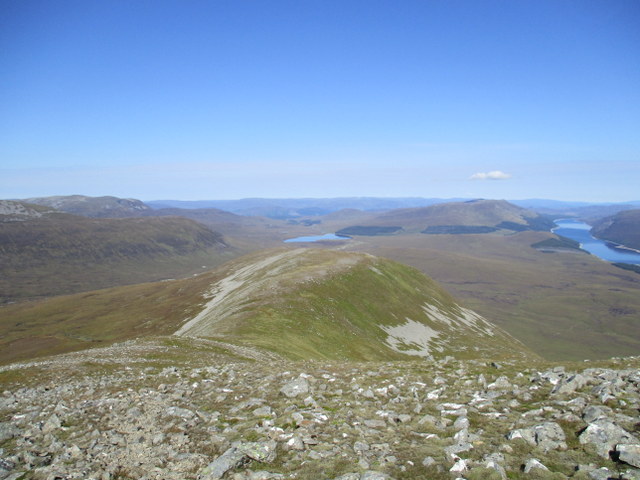 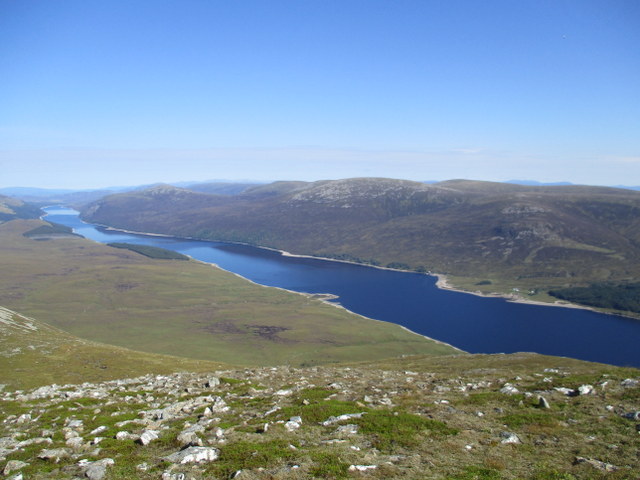 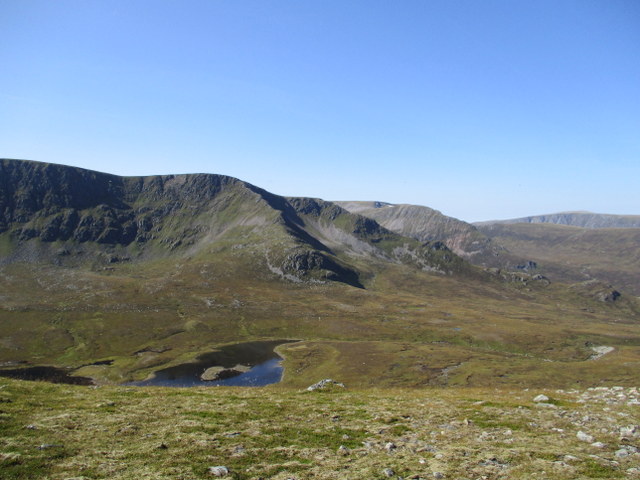 The Leachas ridges and Lancet Edge, seen when descending from Beinn Bheoil

As I dropped lower, the views of Lancet Edge and Ben Alder I'd first seen in the morning reappeared, now mist free. 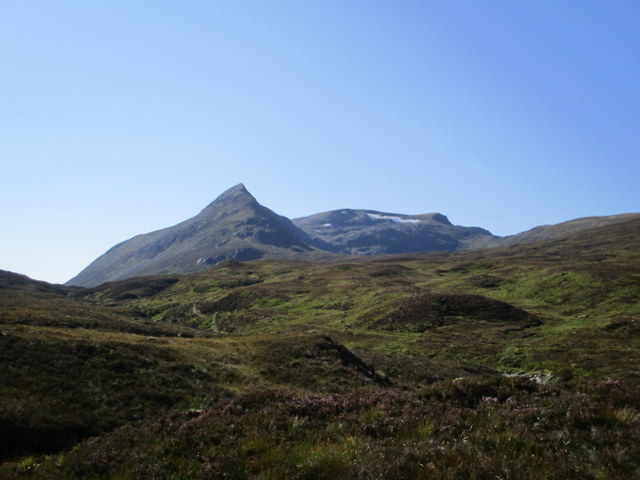 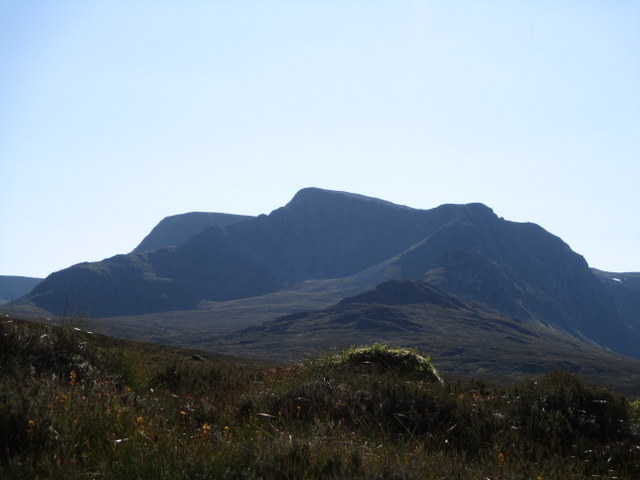 Of course I had a long walk-out ahead, but there were views to enjoy that I'd missed in the morning fog. 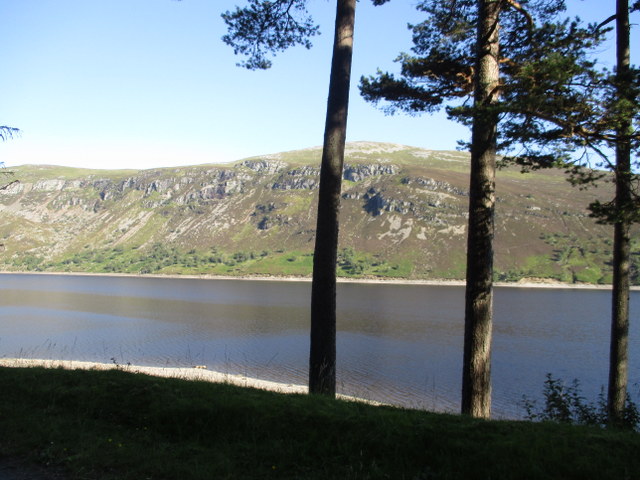 Loch Ericht in the late afternoon

The trees alongside Loch Ericht shaded me from the late afternoon sun, making things comfortable.

About 18 months earlier, I'd first seen the Alder range in all its glory (if at a distance) from Meall Chuaich. And there was that hill, as I looked over Loch Ericht during the later stages of the walk-out. 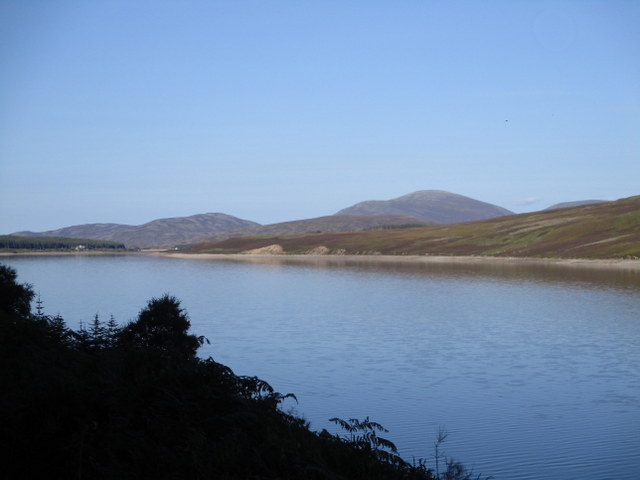 The easy walking between Dalwhinnie and Culra had allowed good progress, and I was back at the car with plenty of daylight left. So it was still playtime for the midges, but they weren't going to worry me after such a superb day.

Well done, that looked superb. You had the perfect day for it, that's for sure. And a pretty good time to complete the circuit. I've had this walk on my to-do list for simply ages now, but the weather has never worked in my favour. I think I might take a tad longer than you though when I do get there.

To say I'm jealous is an understatement

Glad it turned into a nice day for you, the summits do look fabulous.
You got some nice photos on a clear blue sky day

I've been keen on these for a while. I cycled in to take a look and get some exercise one afternoon; I don't fancy the walk there and back

Nice one Simon, you caught a cracking day there with superb images too, well done with the walk in and out too..

Ben Alder is one of my favourite hills, sadly I didn’t see much when I did it last year. I will revisit it and already look forward to getting the same views as you. You made good time!

Cheers Pete. You might do this more quickly than you think. It's a proper mountain walk once you reach the hills, of course, but the terrain and gradients for much of the distance are very easy.

Thanks, ancancha. I hope you enjoy these when you get there.

Cheers Kenny, it was a great day. The long walks in and out were helped by the morning fog and late afternoon shade, keeping things cool on an otherwise bright, sunny day.

Thanks, Silverhill. It's one of my favorites now, too.

Certainly got the weather for it. Don't know if I'll ever go there but does look like great walking.

Found this really interesting as I plan to do the same route (also on foot). With it being a long day I'll only do it on a day when I'm going to get decent weather so could be next summer now - just hope I get a day like you had.

Oh now look what you've made me do!!!! I've just drooled uncontrollably down the front of my shirt!

Great report and photos; that looked a really cracking day. It's a magical contrast when blue skies and sunshine begin to emerge from the grey fog isn't it? You certainly notched up the miles there! I used the wimp's method for these two when I did them in March 2009, cycling to the bothy and staying overnight. I had planned to go up the Long Leachas but it was so windy I thought better of it and just went via the Bealach Breabag. On Beinn Bheoil I was reduced to crawling on all fours a couple of times. I don't think I'd fancy walking all that way along Loch Ericht then back again after doing those two. Good effort!

An area I have not explored for whatever reason - and this report and the pics now make that reason inexplicable.
Great stuff on a great day.

Good effort there Simon , I enjoyed the fotos. I`ve got these 2 in my sights , but the days are getting shorter now.....so Torridon or Ben Alder 2 next , hopefully on 26th or 27th.