2015 09 10.gpx Open full screen  NB: Walkhighlands is not responsible for the accuracy of gpx files in users posts
After three and a half days of hillwalking, during a week's stay near Laggan, Wednesday came and I took a rest. Still on the agenda was the Aonach Beag (Alder) range, which I had planned to take on using the route shown, taking the circuit clockwise. The walk-in and -out across the Ardverikie Estate was on a clear path, so suggested no issues. I would then enter the Ben Alder Estate when crossing the Allt Cam. It was deer stalking season, when we are asked to stick to regular paths and hard ridges to avoid interfering. My route did have an 'off-piste' section between the allt and Carn Dearg. So I contacted the Ben Alder Estate, to find out if any stalking was taking place on Thursday or Friday. The estate member told me there could be stalking in that area on both days, but he didn't want me to abandon my walk. He asked about my plans, and then suggested that I reverse my route. This would mean me being on the north flank of Carn Dearg later in the day, when it was less likely to cause a problem. I agreed to this, and tackling the circuit anti-clockwise turned out to be a success.

On Thursday morning I drove past Loch Laggan to the layby near Luiblea, and started walking. A fine day was again forecast, but with more wind than there had been recently. As I set off, the higher hills were in cloud. After a while, I was moving alongside the Allt Cam. 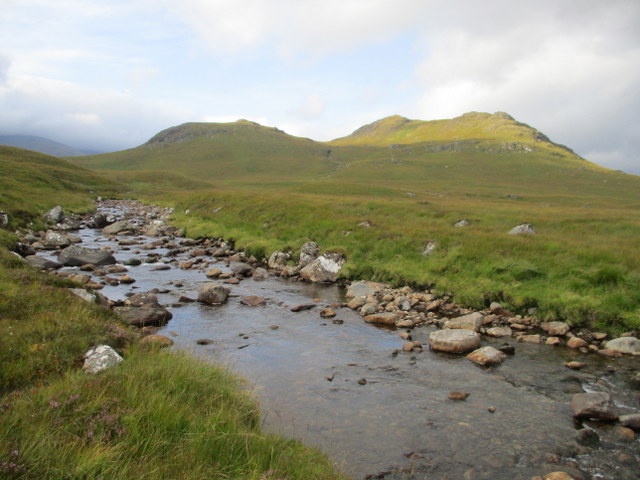 Meall Cos Charnan from the Allt Cam

The burn was crossed below Meall Nathrach. 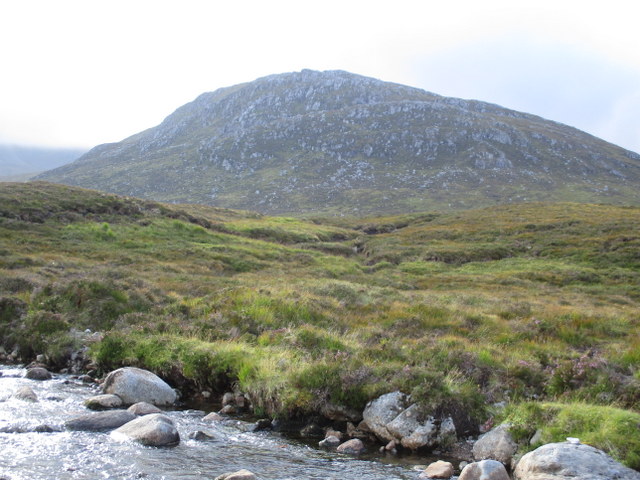 On a fainter path, I moved over sometimes boggy ground towards Sron an Fhuarain, to gain the broad ridge leading up to Beinn Eibhinn. 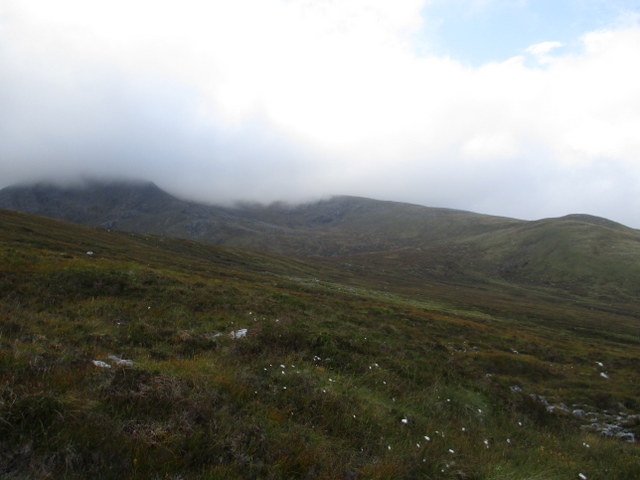 Ascending the ridge, the gradient was fairly gentle - the down side to that is that it doesn't protect you form a headwind. 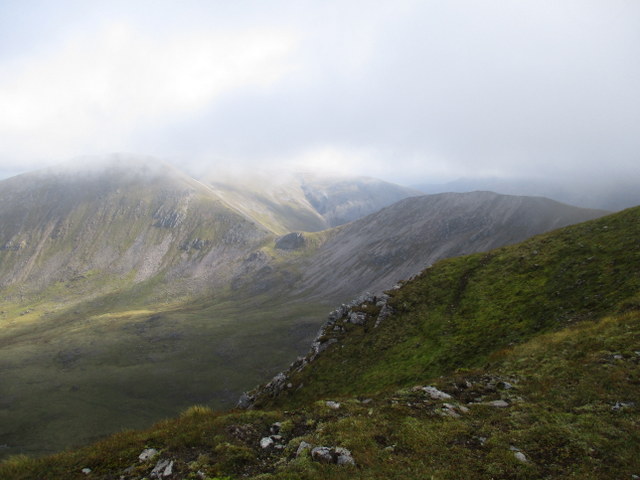 After entering the mist, the 1031 metre top on Beinn Eibhinn's west ridge was reached, and I turned left to head for the day's first Munro. Navigation wasn't too difficult, and the wind was lively, but causing no great problem. As I approached the twin summits, they began to come out of the clag. 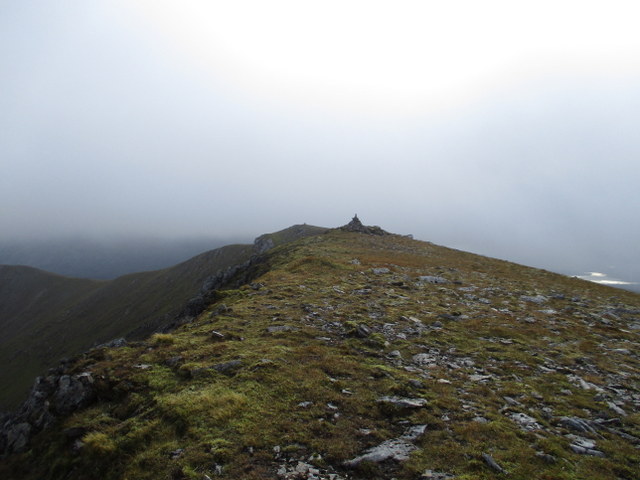 On top, there was something of a view. 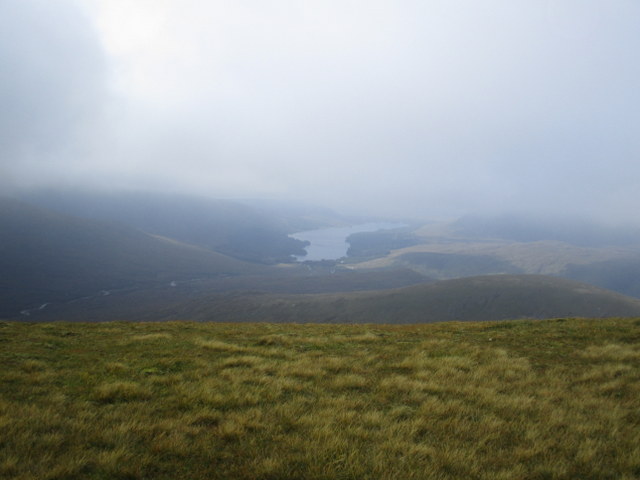 Soon I was moving east along Carr Mor and towards the bealach with Aonach Beag. More views continued to appear as the cloud broke. 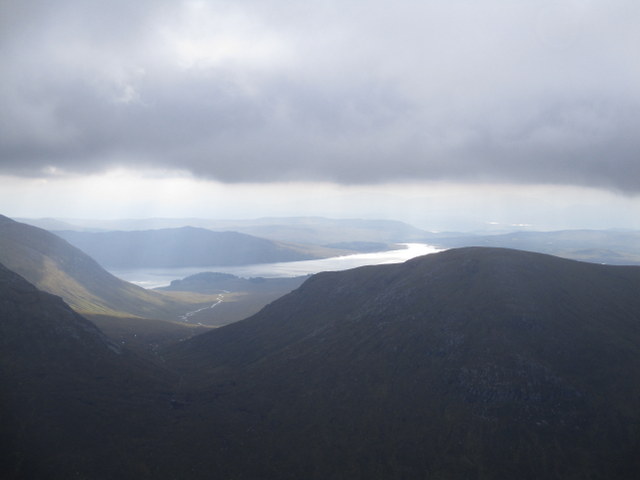 The climb onto Aonach Beag wasn't difficult, and I was beginning to appreciate what a great ridge walk this range gives. 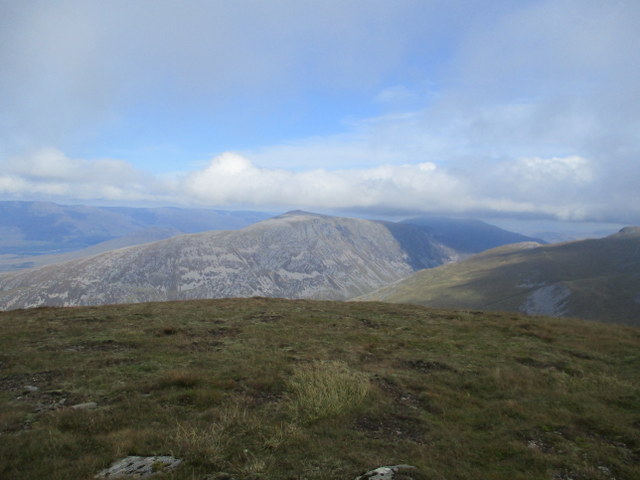 Beinn a' Chlachair from Aonach Beag

There were no difficulties moving towards Geal-Charn either. The wind was blowing from the south and the path stuck mainly to the windward side of the ridge on narrower sections. So at least it was blowing me into the ridge rather than off it. It wasn't so strong as to cause real problems, though. Looking back to Beinn Eibhinn and Aonach Beag, en route to Geal-Charn

Geal-Charn's summit plateau was reached. Even in the clear conditions, care was required when navigating across this plateau to find the correct descent route along Aisre Ghobhainn. But when the steep descent section was located, there was a clear path zigzagging down, and some really tremendous views to be had. Again, there were no technical difficulties. 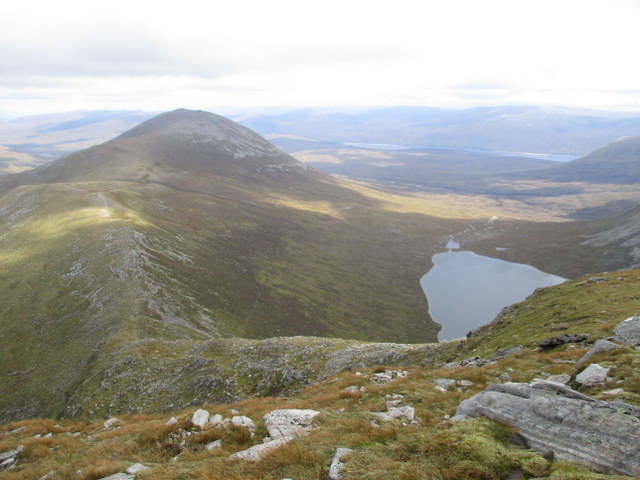 Ready to descend from Geal-Charn, Carn Dearg and Loch an Sgor in front 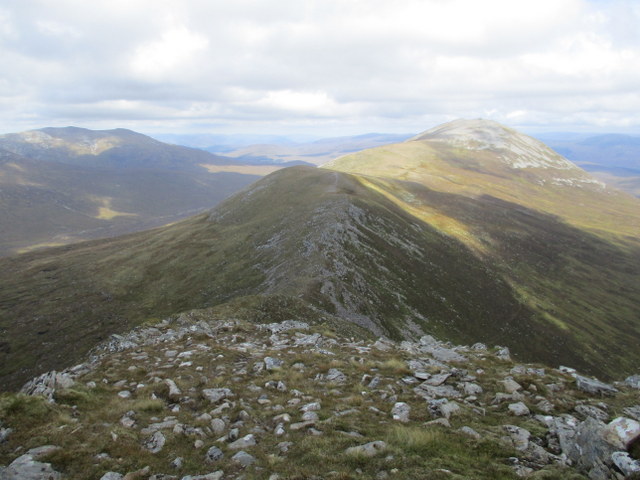 Moving towards Diollaid a' Chairn and Carn Dearg 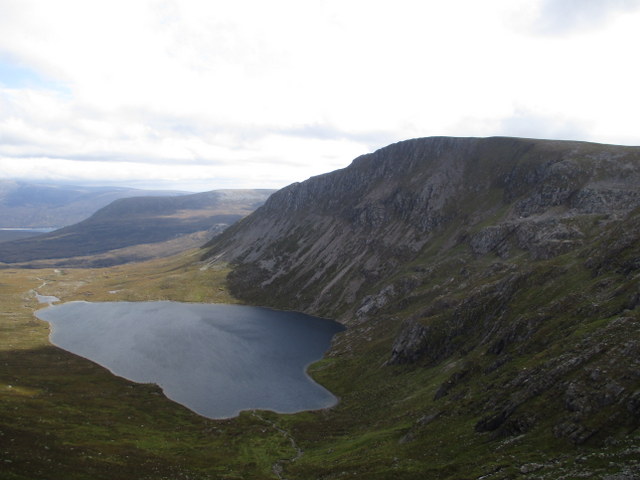 Moving on past the next bealach and towards Diollaid a' Chairn, those great views kept coming. 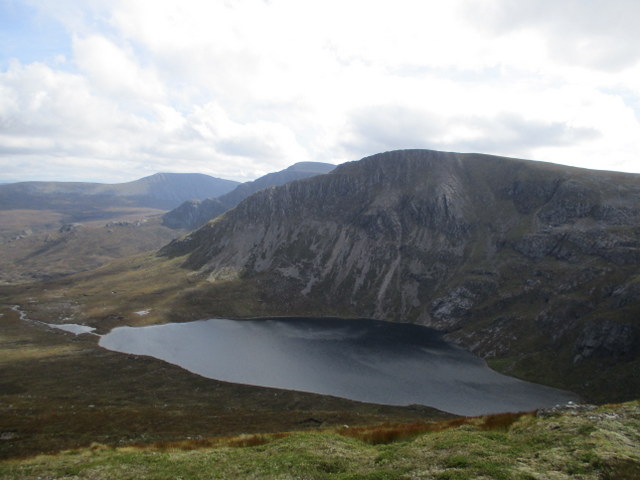 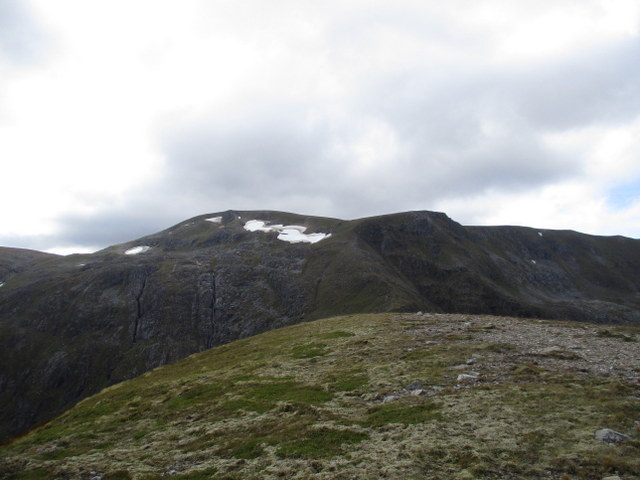 Eventually I arrived at the final Munro, Carn Dearg, with fine vistas all around. Conditions were pleasant now. 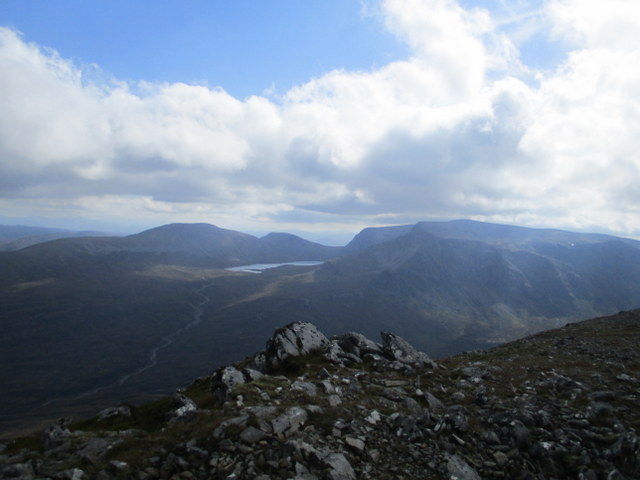 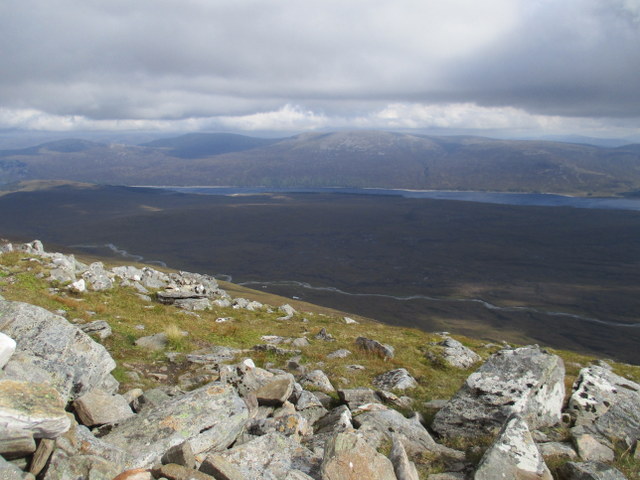 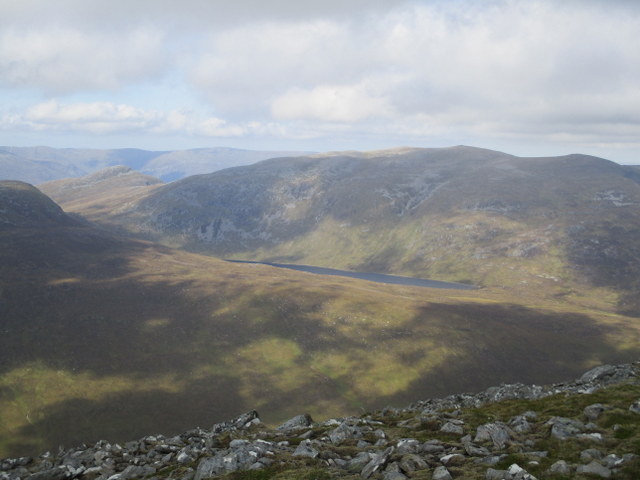 Looking down, I could see the route for the walk-out. Just down there to the burn, around the corner past Beinn a' Chlachair and you're there - nothing to it! Looking along the descent route towards Dubh Lochan

However, something like a broken ankle would be a stark reminder as to how remote this place really is, so the descent was made with due care. But once again, it wasn't too hard.

On the map, things looked as if they'd get easier when the path heading west alongside the burn was reached. But this track was intermittent, often losing itself on uneven, boggy ground - this wasn't the most enjoyable part of the walk. Nice views compensated, though. 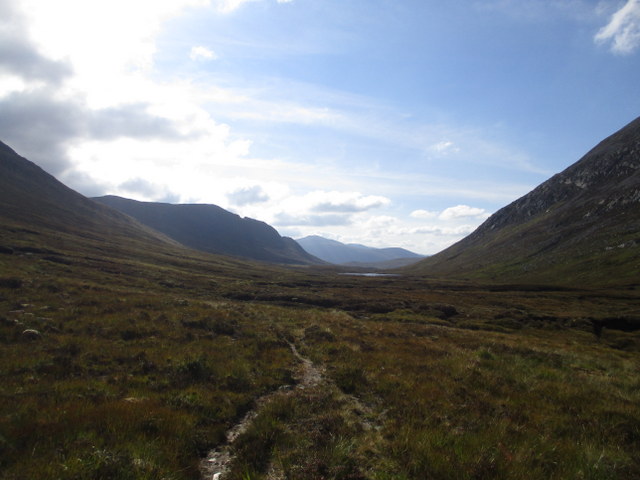 Walking out towards Dubh Lochan

On rejoining the outward route, the walking conditions improved as the burn turned north. 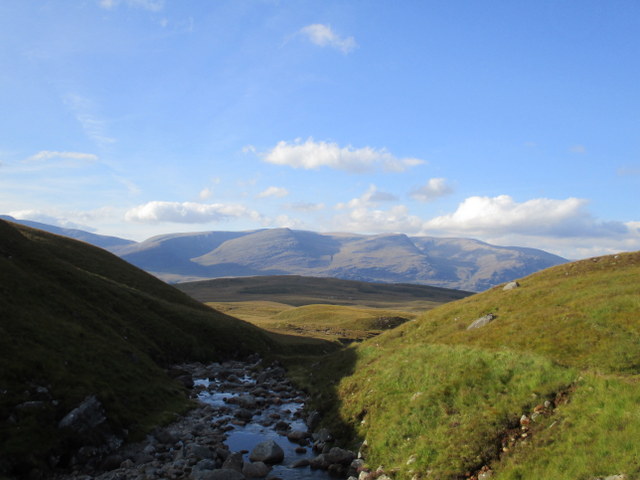 Walking out along the Allt Cam, looking towards the Creag Meagaidh range

As I walked back towards Luiblea, I thought I might meet someone returning from the Beinn a' Chlachair - Creag Pitridh round, either cycling or on foot. But no-one appeared. In fact, I hadn't met a soul all day. I'd seen a herd of deer running near An Lairig, but no sign of any stalkers. Perhaps their tweeds had been very well camouflaged or something. But seriously, I'd like to thank the Ben Alder Estate for their cooperation and helping to make this a successful walk.

I was pretty tired when I got back to the car and drove back to the cottage near Laggan, but still found the energy for one last hillwalk the following day before heading home.

Finally, as this is my last report from my September 2015 trip to the Highlands, I would like to express gratitude to those forum members who acted as 'responsible people', with whom I left details about these solo hikes. So thank you Pam, Karen and Andy. And I wish you all many more safe days on the hills.

A long final walk Simon, you must be fit after your week of walking

Shame about the claggy bit early on though, I loved the views from Eibhinn.

I quite fancy approaching this way but it's a long walk for sure. Good to go the way less travelled.

What a trek, no wonder you were tired!
Once again great pictures of the hills I didn’t see anything of.

ancancha wrote:A long final walk Simon, you must be fit after your week of walking.

Thanks, ancancha. I actually did the Moine Mhor 2 the day after this. It's been rather a lazy week since, so I must get moving again.

Shame about the claggy bit early on though, I loved the views from Eibhinn.

It was thoroughly enjoyable BC. The morning clouds didn't spoil anything, and it was one of the best weeks of weather I've had in Scotland.

dogplodder wrote:I quite fancy approaching this way but it's a long walk for sure. Good to go the way less travelled.

A fair bit of the track in and out could be cycled. This route did add variety after doing the Ben Alder 2 from Dalwhinnie.

Silverhill wrote:What a trek, no wonder you were tired!
Once again great pictures of the hills I didn’t see anything of.

Thank you, Silverhill. Your second sentence is something I've often quoted when replying to trip reports on this forum.

That looks like a wonderful walk, and a long one! Think it might take me a full 24 hours

Great pics, and good to hear how helpful the estate was. I think folk are starting to accept there's room for everybody out there!