Ben Nevis via the SW top

Ben Nevis via the SW top


I go up Ben Nevis once a year and on this day I was planning to go via the CMD. The weather forecast was good apart from gusts up to 50 MPH

. So a last minute change of plan was to ascend via the southwest munro top Carn Dearg.


New_Route (4).gpx Open full screen  NB: Walkhighlands is not responsible for the accuracy of gpx files in users posts

This photo taken from the Steall meadows a few years back shows the approx. route up via the waterslide and then west to the top of Carn Dearg and on to the Ben. The carpark at the end of the road in Glen Nevis is at an elevation of around 150 metres. I walked back from the car and picked the first bit of undergrowth at the side of the road that looked as if someone had been through before. I found a half decent route through the trees and ferns until I was soon on the open hill on the right hand side of the waterslide. Its a steep climb on a rough path all the way up to the corrie. The water is very dangerous to cross on the steep slope and shouldn't be attempted until on the flat ground at the top.
This is where I crossed the Allt Coire Eoghainn and it was still really slippy but no real danger on the flat ground The next stage up to Carn Dearg east ridge was the steepest part of the day and from high up it felt like I was perched above the car park.
Zoom to the start point from about 900metres 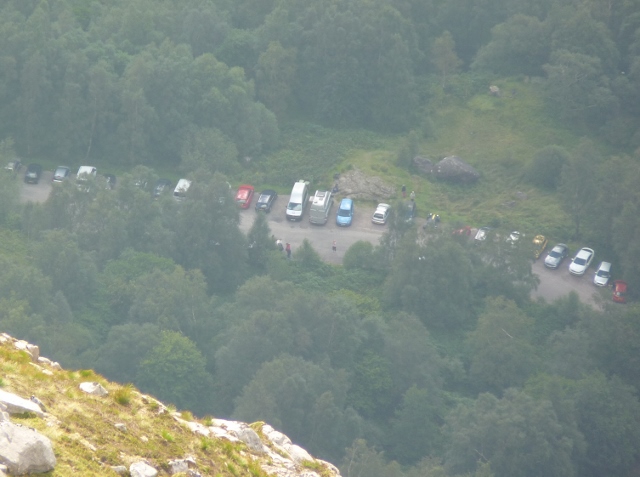 I went down to the Col between the Ben and Carn Dearg and you lose very little height. There was thick cloud from this point onwards, I never bothered getting map or compass out as I knew a straight line would take me up the steep scree and boulder slope and I would hit the pony track eventually which I did at around 1250metres. After being on what felt like a very remote mountain it was weird to enter through the mist into a Zombie like world of figures wandering up and down

. I went up to the top then back down to the point I had joined the path took a bearing to avoid five finger gully and back down the same way. I was surprised to see 2 people while heading down and thought they had got lost on the descent of the pony track I was going to ask if they wanted to come down with me and I would give then a lift back to the visitor centre. but it turned out they were munro top baggers and had decided to do Carn Dearg via the pony track which involves a big descent and reascent back to the path. On my own again and all the cloud cover had now gone View to the Steall meadows Back down alongside the waterslide 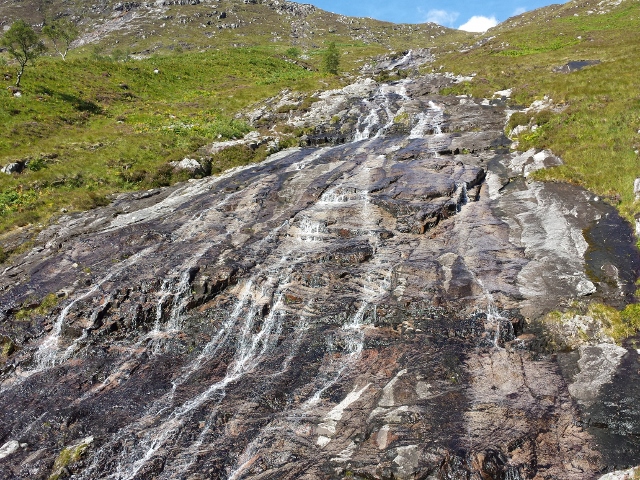 I had now ran out of water and the pools in the slide looked really clear, cold and tempting but a recent discussion about all the unsavoury stuff lying on the mountain far above put me off I was soon back in the trees and tall ferns a short distance from the car in bright sunlight and this is where I made my only navigational error of the day. I got wrapped up in ferns, thorn bushes, trees etc. and walked into 6 foot high boulders before bursting out of the bushes into the middle of the car park like a lunatic with people looking at me in astonishment

I felt the gaze of the folk at the ice cream van as I made for the car removing the foliage from myself as I went.

A good day though on a rarely visited part of Ben Nevis and even though you start 150m above sea level the steepness made it hard especially on the way down.
I would recommend this route but careful navigation is required in poor weather, in good weather the views are outstanding throughout

Wow, what a great route!

I fancy walking it myself sometime, but will save it for a clear day as you suggest. Seems a shame to miss the spectacularly steep views down!

Fantastic photos.... I haven't been up the Ben yet, your route looks amazing and so much more peaceful than the tourist route!
Pretty steep though

Silverhill wrote:Wow, what a great route!

I fancy walking it myself sometime, but will save it for a clear day as you suggest. Seems a shame to miss the spectacularly steep views down!

Cheers Silverhill definitely one for a nice day

grumpy old bagger wrote:Fantastic photos.... I haven't been up the Ben yet, your route looks amazing and so much more peaceful than the tourist route!
Pretty steep though

Cheers grumpy old bagger. Yes it certainly keeps you away from the crowds.

I have had a quick scan through them and there has been very few that have covered this side of the the mountain. There is brilliant report from Leithysuburbs who descended on the SE side into Glen Nevis had a look at the route before and it looks even steeper. Also a good report from mountainlove who ascended via the waterslide before doing several munros.
I have had a look at going up via surgeons rib which goes up alongside surgeons gully and takes you up to near Carn Dearg SW top. I havn't got much info on it though i believe it is supposed to be an easy scramble

If anyone has done it or has any info on it regarding how it was regarding route finding etc. I would be interested to know what its like cheers

Nice one, liked your choice of route and the image down to the wee car park helps give the reader a feel for the height.

scottishkennyg wrote:Nice one, liked your choice of route and the image down to the wee car park helps give the reader a feel for the height.

Cheers kenny that photo worked ok. Usually when i try to take one showing the steepness or height i struggle to make it happen

Nice route
I had planned something similar (actually a descent ) recently but ended up doing the Top from the pony track - yours looked a much more satisfying climb.

weaselmaster wrote:Nice route
I had planned something similar (actually a descent ) recently but ended up doing the Top from the pony track - yours looked a much more satisfying climb.

Hi weaselmaster. A good bit of extra ascent using the pony track for this top. But all good fun