Feshie.gpx Open full screen  NB: Walkhighlands is not responsible for the accuracy of gpx files in users posts

Last week I dragged my weary legs to the top of Sgor Gaoith, the Munro on the western fringe of the Cairngorms above Glen Feshie. I rested in the protective lee of a cairn, out of the wind that fought to whip the map from my chilled fingers and enjoyed the crisp autumnal view from my lofty perch. There, I pondered the fate of my plan.

The forecast of crisp autumnal skies and dwindling days is a sure-fire bet to instil enthusiasm. Combined with a cluster of unvisited Munros on the western fringe of the Cairngorms, and you have the recipe for over-enthusiasm. Throw in a dash of unexpected weather and you soon know you might have bitten off more than you can chew: or want to.

I’ve always worked on the dictum that you only have plans so you know what to change when things go pear-shaped. Things weren’t exactly pear-shaped, but they had definitely begun to assume a shape that bore a closer resemblance to a banana. You know the wind is gusting quite strongly when your walking pole is blown to the horizontal as it dangles loosely from your wrist.

My originally optimistic plan meant that I’d hauled a heavier than normal pack to the top of my first Munro of the day with food and gear for a two-day trip: which of course also meant the paraphernalia for a wild camp somewhere on the Moine Mhor.

But, barely three hours from the car, I struggled against the wind.

The prospect of traversing across to Braeriach, then heading south to Monadh Mor and Beinn Bhrotain, before returning to Glen Feshie over Mullach Clach a Bhlair over the next two days was fast becoming a less than attractive prospect. The idea of a wild camp up there was coloured by the fear that I would see the last of my tent as it took an aerial route to Aviemore. 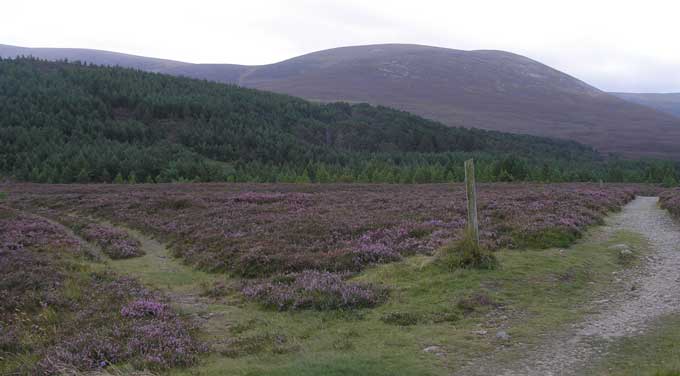 Well, not completely. I decided to salvage something from the day by heading south across the featureless Moine Mhor and visiting Mullach Clach a Bhlair before beating an ignominious retreat.

I gazed over at the bulky slopes of Braeriach which rose above the vast cleft in which nestled the steel-blue streak of Loch Einich. Two shadowed corries hung above fluted crags and tumbling sheets of scree: aeons of glacial forces having taken a giant ice-cream scoop to the mountain. Tiny white horses scudded across the surface of the loch, suggesting it was just as windy down there as it was on the top of Sgor Gaoith.

Another day. Another season.

Already it had been an inauspicious start to the day. I’d over slept, got snarled up in the Glasgow traffic and then hit the tail-end of Perth’s rush hour at Broxden. To cap it all, I missed the notice announcing that the road out of Kingussie to Glen Feshie was closed. It was nearly midday when I set out from the car. But, all togged up and loaded up for my planned trip, the time didn’t really matter.

From the parking space before Achlean, a brief stride along the tarmac brought the cottage into view, hidden in its bowl until the last few yards. There, the track into the forest strikes off to the left and simply continues to rise in a steady comfortable gradient up towards the Moine Mhor. 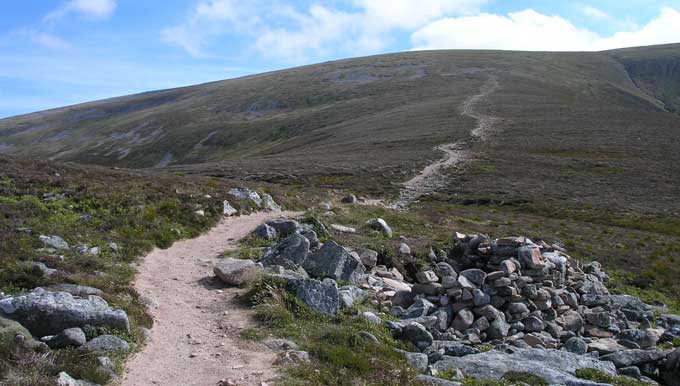 ... and the track just keeps on rising to Carn Ban Mor

A jumble of stones marked what constitutes a crossroads on the edge of the expanse, and a simple left turn heads to the cairn on Carn Ban Mor, beyond which the pinnacle of Sgor Gaoith rose like the prow of a ship on the skyline. 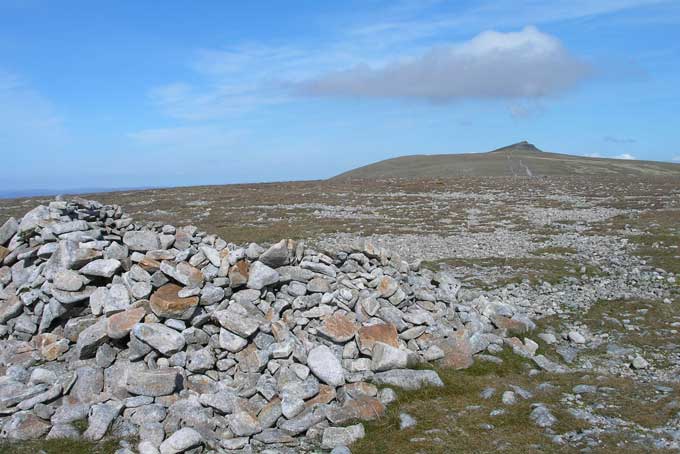 Sgor Gaoith peeps over the horizon from Carn Ban Mor

The wind had been strengthening as the path rose higher. As the plateau was reached, so was my conclusion about the fate of my trip. In addition, the prevailing conditions were sufficient to dissuade me from continuing to the northerly top, a mere seven metres lower, but half a mile or so away. 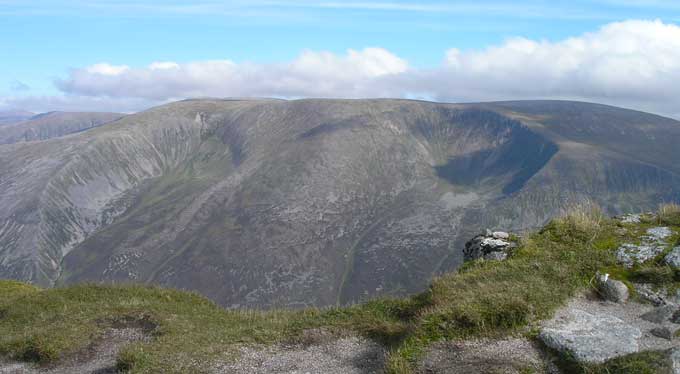 After lunch I turned into the wind and, from the crossroad cairn, headed across the Moine Mhor in a B-line for the track wending its way to Mullach Clach a Bhlair. With gratitude to the recent relatively dry weather I had a bouncy battle against the wind across drying peat hags. In wetter conditions it would have been a peat-laden bog trudge: instead, a gentle saunter.

At the gravel Land Rover track I simply followed its sweeping way to just below MCB, the summit of which was just two or three hundred metres away. Once there, it was clear that it was one of those tops that prompt the question “Why?”

A small jumble of stones marked the highest point of a gently sloping dome but, as the wind tore across, it had no redeeming features apart from the view to peaks I was no longer going to be visiting. The only reaction it triggered was to turn round and leave. 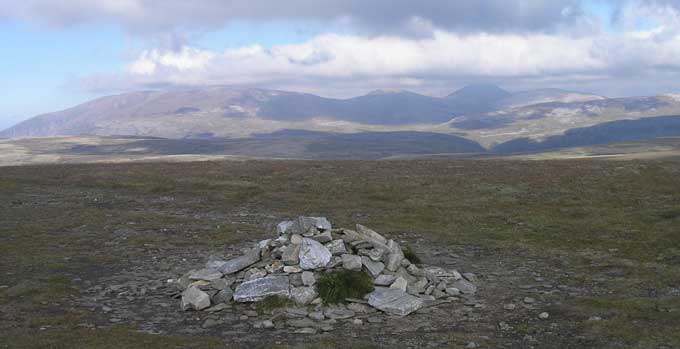 Rejoining the Land Rover track and following it west, its line is visible, scraped into the hillside of Meall nan Sleac. I had hoped to be out of the wind as it dropped below the level of the plateau, but instead found myself being driven down by the strength of the gusts to my back. With each step I had to slam my feet to stop being propelled forward like a fell runner, and as a result gradually felt a blister begin to form on the base of my left heel. It was becoming “one of those days.”

Meall nan Sleac and the way down to Glen Feshie

I sought the relief of Meall nan Sleac, which anyway looked a more aesthetic end to the day: a fine short ridge on the southern edge of Coire Garbhlach with a descent down its nose back to the glen. 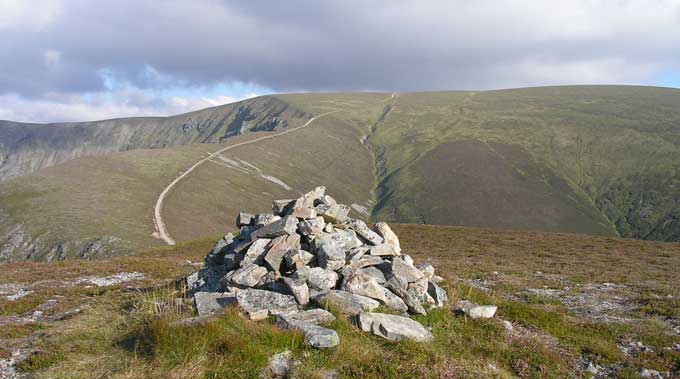 At last, as I dropped towards the Allt Garbhlach the power of the wind diminished and life became more comfortable. Then, as autumn shadows lengthened, I crossed the open ground on the glen floor towards the River Feshie and followed the track back to Achlean. 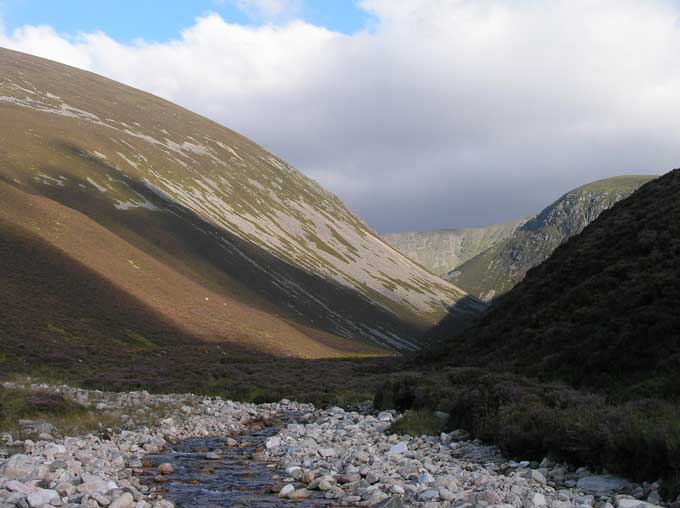 What had been a gentle tarmac stride on the way out was now more a tiring foot-burning slog to the car, with blissful relief when boots were removed.

My planned two-day trip had been severely truncated but I still managed to achieve something, despite the conditions I’d failed to predict.

Last week, Sgor Gaoith lived up to its name: the windy peak.

Apart from the wind you had a great day for these two. I quite like the vast emptiness of the Moine Mhor area. Your pictures capture it beautifully.

Nice one, OD. I did the same route the day after you, when it had got even windier if anything. Glen Feshie is beautiful. It gives the round variety, the purple heather and rich green conifers of the glen contrasting with the grey-greens of the bleak Moine Mhor.

Good read there OD with some nice complementary images. Shame that the wind was so strong on this visit especially as you stated there is no where to hide up on the plateau..

Users browsing this forum: Bootsnbooks, corm0003, Owen b and 102 guests