The second day of our Durness week, I said we had to do Ben Klibreck (despite it being another cloudy and dull day) as I wanted to get the Munros done before we went to do anything else around there... So we set off on the 50 miles or so drive to Vagastie, between Altnaharra and Crask. We arrived just after midday and booted up, noting happily that the weather was clearing and bits of mountain were appearing!

We hadn't parked at the 'Munro-baggers' parking (as the route looked messy with ups and downs), nor at Vagastie, but at the bridge just before Vagastie - we later thought it would be a better route from Vagastie itself as there is a ridge-line to follow up to the main ridge of the hill.

We set off on a nice, dry, stony path to the bridge. After those first few yards the path then went decidedly boggy (and this was despite the very dry spring we'd had - it must be bad in a wet year!) We paddled most of the way to the foot of the climb up to the col between Cnoc Sgriodan and Carn an Fheidh. The climb up the hillside wasn't much drier unfortunately and being pathless with longish grass, was quite tedious really.

We reached the col just before two people coming from Cnoc Sgriodan on the Crask route and I hoped to bump into them for a natter but we never did - they were just behind us the rest of the way... I could see a little path along the edge of the ridge heading towards A' Chioch - Richard said he'd read that we should follow that for ease of passage... We headed up boggy ground until we reached the (quite muddy) path and set off traversing the hillside. At one point, just before it went onto the ridge proper before A' Chioch, I found it was over quite steep and slightly craggy ground so wasn't very happy for a while - it looked too steep to head up onto the ridge proper before the next col though.

At the col you then head up slightly onto A' Chioch on one of several paths - take your pick... By now I was eyeing the steep-looking cone of Meall nan Con and wondering whether I'd be okay on it. As we reached it I thought it was probably fine although it looked a bit loose. We could see 2 guys who'd been going up in front of us had stopped for a rest - as we passed them, they saw my 'Yorkshire 3 Peaks' t-shirt and hailed me as they were Yorkshire folks too - but now apparently living in Scotland, lucky beggars!

We chatted for a while and then continued up the steep cone... I thought we'd be up the cone in 20 minutes but it was tougher than it looked so we were more like 30. As we reached it the views opened up all around with superb scenery to the north, especially Loch Naver, Bens Loyal & Hope and beyond... Soon after the Yorkshire guys were heard to be approaching the summit - one of them was a total 'gab-a-lot' and managed to do the whole ascent without stopping talking once! I never know how people find the extra breath! Richard said he didn't know how the other guy had the energy to listen! It wasn't too warm on the summit and we couldn't really find anywhere much out of the wind - I was sure we'd find somewhere much warmer on the way back down so we decided to descend the cone and look for somewhere on the ridge or the col. Sure enough, there were quite a few warm spots so we had quite a few breaks in not many yards and lounged in the sun eating tea loaf and drinking our flasks. I even enjoyed a bit of a sunbathe Couldn't choose between these so put both in sorry!

I wanted to go back along the ridge over Creag an Lochan so we followed the easy path over the hill until it petered out whence we headed down to hunt for the original contour path. We eventually found it and were soon back on the col and then rapidly ploughing down the wet, grassy hillside for the car. By the time I reached it my feet were soaked!

So to sum up, we liked the actual summit area of Klibreck but weren't too fussed with the long, pathless and boggy walking on the rest of the hill so probably won't set foot on it again. The pics have come out quite nice though...

I was surprised anyone found the energy to do Klibreck on the same day as Ben Hope - think I'd rather just do Ben Hope twice! 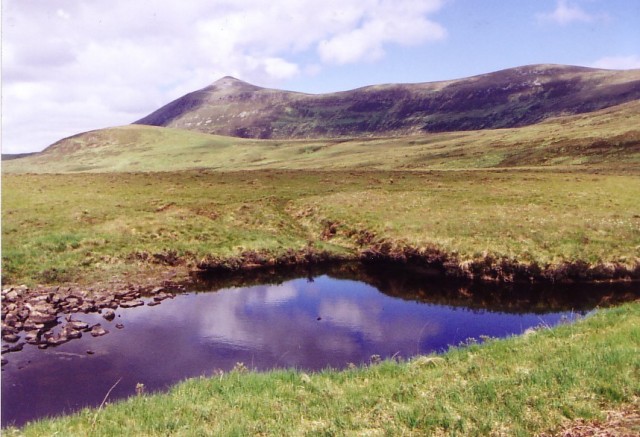 mountain coward wrote:I thought we'd be up the cone in 20 minutes but it was tougher than it looked so we were more like 30.

I'm chuckling at your army drill precision...it was only 10 minutes!!!

, and you even got to sun bathe a little too

Hi MC,
Nice report. You had better weather than me so nice pictures too

I was up there last year (rained all year remember hahaha) and the boggy lower ground was a complete swamp on my recce. therefore I started further south than you and went up the Kronk (Cnon Sgriodain) . That way on the day it was a pleasant walk and not too wet underfoot if slightly longer (14km). I am sure if you went back you would find this route more enjoyable.

I hope you didn't derobe to much

Didn't actually get further down than my t-shirt Monty

What a disappointment for ol' Richard eh?

I would hate to do that walk in wetter weather - it would be a complete swamp... We wished afterwards we'd done it from Crask and then gone back along the good track in the valley behind the mountain - looked a lovely valley. Don't think I'd do it again though...
Last edited by mountain coward on Mon Jul 05, 2010 9:55 am, edited 1 time in total.

monty wrote:I started further south than you and went up the Kronk (Cnon Sgriodain) . That way on the day it was a pleasant walk and not too wet underfoot if slightly longer (14km). I am sure if you went back you would find this route more enjoyable.

Think you had the right idea there. I took a similar route to MC and wasn't overly impressed with the boggy lower part of the hill. The guy at the Crask Inn suggested we should have started there instead, and walked into the Bealach Easaich. Seems like another good option actually - one that I would try if I did it again - maybe in a circuit coming back down the way you went up.

Yeah I bet he said you should have started and finished at his inn... that way, you'd have been re-hydrating in his bar afterwards!

But it did look a much better route on reflection and there's a track shown on the map which looks to help starting off onto the start of the ridge...