Quiraing - views and winds to make you gasp

Quiraing - views and winds to make you gasp

quiraing.gpx Open full screen  NB: Walkhighlands is not responsible for the accuracy of gpx files in users posts

Driving up to the pass at the Quiraing, all the cars parked in the passing places for a mile in either direction hinted that the car park was going to be a tad busy. No surprises then - no spaces at all! We parked directly in front of a couple of cars and had lunch while waiting for a space to become free. Wish granted ten minutes later, we headed north towards the top of the ridge amidst spectacular scenery. Looking back south along the ridge: Most people headed directly along the lower path towards the main landforms, and so climbing steeply instead, we soon left the crowds behind. The way up was steep and eroded, and then a little wet on top, but plenty of good views. Staying close to the cliffs, the table eventually became visible below. The jumble of complicated ground around it was just as impressive. Beyond the trig point summit, the spectacular area we were walking around this morning, including Fingal's Tomb, became visible. Some recent landslide activity had been going on here. A break in the cliffs signalled the end of the northward stretch, with a sharp turn downhill - from here, it should be easy to make a beeline back to the car park through ever-busier terrain. Except the wind was funneling through the valley directly into our faces. The wind continually increased until the large cairn at the low pass underneath The Needle - we saw a lady get blown off the path here! We decided to detour up towards the table to the area we saw earlier on the ridge. This was the highlight of the walk, albeit still quite windy in some of the gullies, with fantastic rock architecture quite unlike anything I've ever seen before. Photos don't really do the place justice, but the scale of the rocks hemming you in make you feel very small. After scrambling back down to the tourist path (with a few puzzled stares from trainer-clad passers by), we continued along the path to the north, taking in all the most visited sights of the Quiraing. One unexpected scrambly bit on the otherwise easy path could cause problems for the less agile, otherwise eyes were firmly on the scenery. What a fantastic place, although the council really should sort out the parking...

Lots of that looks fabulous

Have enjoyed your recent series of walk reports very much, thanks for posting and allowing the rest of us to follow your travels

Thanks ancancha - it's an amazing place!

RiverSong wrote:Have enjoyed your recent series of walk reports very much, thanks for posting and allowing the rest of us to follow your travels

walkhighlands is such a useful resource for me... I'd feel bad if I didn't write back!

Enjoyed that. Those rock formations are stunning.

Quiraing spells magic. So many times I explored it and it's never enough.

Looks like The Needle hasn't changed much since our last visit 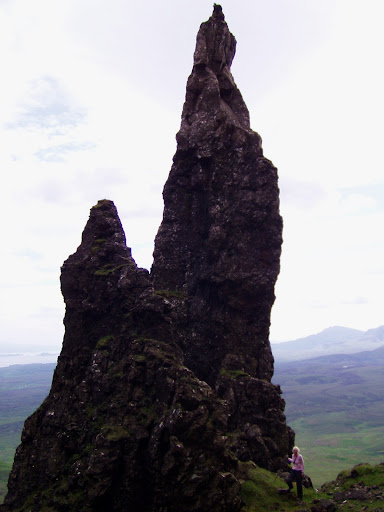