A spectacular day on the Little Shepherd

A spectacular day on the Little Shepherd


I tried this walk on a recommendation from someone I'd encountered by chance the previous day in Lairig Gartain, and I'm ever so glad I did.

I used the standard route as described on this site: from the A82 car park, up the Lairig Eilde, and then straight up the flanks of Buachaille Etive Beag. The path is very clear, and the nearly-vertical ascent up the side, while very steep indeed, is along a well-constructed set of stone steps. As you climb, you get a great view of the Aonach Eagach, daring you to approach! After reaching the saddle point (bealach?), you think you've done the worst of it, but no, there's worse yet to come. I opted to go south first, to the Stob Dubh summit which is the larger and also longer to reach. At first there is a steep climb to an intermediate summit, and then a ridge walk that in truth looks a lot worse than it is. The day was very windy, I'm guessing 40-50 mph, and I was half-concerned of getting blown off the mountain, but at no point is the ridge narrow enough to cause true concern. Once at the true summit of Stob Dubh, the view is unreal. The Lairig Gartain way down below, on your left: Buachaille Etive Mor and the Stob Coire Raineach to the north and east: 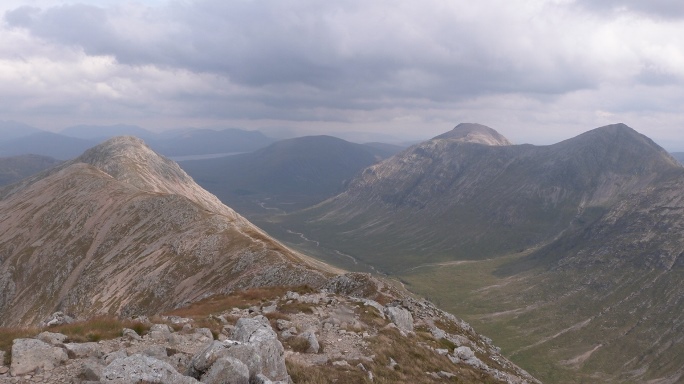 Loch Etive off in the distance to the south: After backtracking down to the bealach, now I had to climb the Stob Coire Raineach on the north side to bag my second Munro of the day. This was an even steeper climb, and the path here is very indistinct. There are bits of path here and there, but most of the time you are left to your own devices. It's not nearly as sharp-looking a ridge as the one to the south, though. Once near the top, you get a great view back to the south of the Stob Dubh and its smaller pretender in front of it: Then from the summit, the world is yours. Best view perhaps is the one to Buachaille Etive Mor, and also the broad flanks of Beinn a Chrulaiste to the left, which had defeated me (due to high winds) the prior day! And in the end, this is what happens at the summit cairn, when your camera's self-timer has a 10-second delay, but you really needed a 12-second delay: Altogether a fantastic day, and I'm ever so grateful to the anonymous person who told me to take this route. It's vertically quite challenging, but the rewards are well worth the exertion, and the path is easily followed for the most part. Even in windy conditions, this was a great day out.

And last of all, I believe this is a view of the summit of Ben Nevis to the north, but would appreciate confirmation from those with greater experience: I agree - it's a great walk with a fantastic path. Good to see the views again.

A great hill, which I enjoyed very much! The views in all directions are fabulous. You indeed saw Ben Nevis.

Lovely report, it's an enjoyable mountain but sadly I made its acquaintance in wind and rain so I really appreciate your photos

Silverhill wrote:A great hill, which I enjoyed very much! The views in all directions are fabulous. You indeed saw Ben Nevis.

Huff_n_Puff wrote:I made its acquaintance in wind and rain so I really appreciate your photos

Wind I had plenty of, but mercifully no rain. I admire you for plodding on to the top, without having the view as a reward and incentive!