Misty Marsco and a phantom cry for help

Misty Marsco and a phantom cry for help

marsco.gpx Open full screen  NB: Walkhighlands is not responsible for the accuracy of gpx files in users posts

A little cloud covering the Cuillins this morning, but with a greater than 90% chance of cloud-free Munros by mid-morning, 736-metre high Marsco was surely a safe bet. We had a late breakfast and arrived at Sligachan shortly after 10.30. Perhaps mid-morning was running late today? 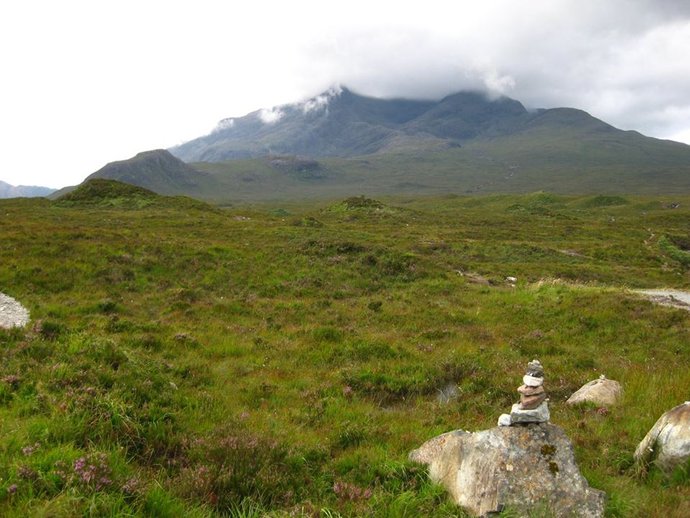 Glamaig was cloud free already - maybe we should head up there instead? But we hadn't looked at any routes and didn't feel like scree today. Anyway, it would only be a matter of time before lower Marsco cleared... right? The first couple of miles led through a windy Glen Sligachan on a good path - lots of good views of the partially obscured summits around. This must be an exciting place on a wild winter's day. Marsco still with a white blanket, but only just: Underfoot conditions changed abruptly as we reached the Allt na Measarroch, turning left onto the path up this smaller glen. Bog galore! At first the path and surrounding moor suffered from only being a few inches above the burn level, so they probably flood regularly. We hoped it might improve on the slightly steeper section above 50 metres... it didn't. Long jumping and detours around the worst bits were both on the menu today - somehow eventually making it to the bealach (still only 300 metres above the sea) with dry boots. Looking back down the valley, sunshine was breaking through over Glen Sligachan. Towards Loch Ainort, noise from the A87 spoiling the feeling of remoteness: Belig and Garbh-bheinn also cloud-free, just with lower cloud in the foreground: Whereas up to the right, our target for the day seemed about the only summit left covered by cloud... A boggy approach to what seemed to have been a poor choice for today wasn't helped by the continuing gusty winds. MWIS had indicated that these would progressively drop through the day, but it hadn't really happened yet, and the gusts in particular weren't encouraging - a view shared by another walker who passed us here. Anyway, for now we were below the clouds and sheltered by the slopes above, following a mercifully drier path (mostly) and fence posts all the way to the summit ridge, just in the clouds. No navigational difficulties here thanks to a mostly clear path - if in doubt, you can also follow the fence posts. Arriving on the misty ridge, we were expecting to be hit by a wall of wind, but it seemed to have dropped towards about 30 mph. The ridge started off broad, and the wind dropped progressively as it narrowed. Miraculously, it dropped to nothing as the narrowest section was reached, becoming eerily quiet in the mist. "Knife-edge" doesn't quite seem accurate - with no wind it's perfectly straightforward on a grassy path - but in clear conditions it's probably quite an exciting traverse. Even in the cloud it was good fun... knowing the wind could return we sped across. Arriving at the shelter beyond a windless summit, we waited around for a short while, the whiteness above seeming to brighten a little for the briefest of moments. While we were at the summit shelter, my partner's phone bleeped - apparently wifi was available

for a laugh he pressed on it... and it connected! By the time he'd opened up an internet browser and tried to access a website, it was gone again, but very strange all the same...

Unfortunately the cloud didn't seem to be clearing after all, and a couple of sudden wind gusts interrupting the calm reminded us of where we were. So it was back along the ridge. Back down below the cloud, things seemed to be improving a little, but too slowly for us today. We weren't really looking forward to returning by the boggy burn path, but alternatives seemed limited. As we reached the path, the sound of distant shouting whistled by on the wind. Looking around, we couldn't see anyone, and it was difficult to work out where the voices were coming from. The noises continued intermittently - suddenly, a higher voice was audible, and clearly (to me anyway) sounded like "help!" Concerned now, we left the path and headed west a little onto higher ground, hearing "help!" once more on the way. The voices seemed to be coming from ahead and to the left, possibly from Marsco's northern slopes. Having seen two groups ahead of us on the ascent, a single walker and a couple, it seemed possible that somebody had been in trouble - we hadn't seen them since, so they couldn't have descended by the same route as us. We decided to continue down the path, bringing us slightly closer to the voices.

A little while after, further shouts helped us spot a group of about 4 walkers descending steep ground on the northern side of Marsco. They weren't descending very close to each other, and they seemed to be having intermittent conversations with each other by shouting across the hillside. Seemed to me like a particularly stupid way of communicating for numerous reasons - spoiling the peace and quiet for others and causing us undue concern. We'd nearly headed even further away from the path to try and find them earlier too...

Eventually we got back to the main Sligachan path. We had loads of time so sat around in the burn, building a little dam and letting boots dry. I was also sort of planning to speak my mind to the shouting walking party when they passed by, but they never came past so I didn't get the opportunity. Meanwhile, the low cloud had mostly lifted by now - Marsco annoyingly cloud free (why does that always seem to happen?

), and the Cuillins nearly clearing. Just the straightforward walk back to the road left then. The following wind was light now, allowing a few midges to investigate us as we headed back, and preventing us from stopping anywhere. Didn't seem to bother the sheep though! 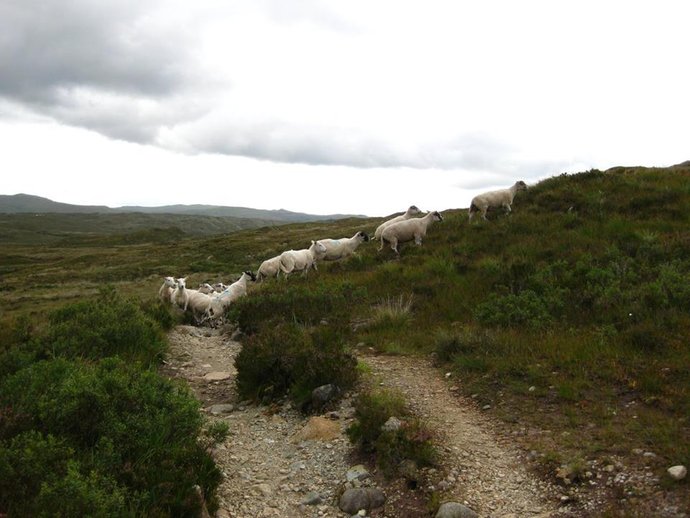 All-in-all a bit frustrating r.e. views today, especially as the otherwise perfect weather so far this week had shown us what it could be like. But still a good day's walk, followed by some decent, filling food at the Sligachan bar

But if you ever shout to each other in the hills, please don't unless you're actually in trouble! The wind can carry your voices a long way...