Recently I've been getting itchy feet. Itchy in terms of, I need to be doing something. I used to do a fair bit of kayaking and running but for various reasons they've been neglected. After some discussions with a friend, (very prolonged discussions at that) we decided to give this hill walking malarky a go. More specifically, Munro bagging. Since Inverness is our base point, Ben Wyvis seemed to be the very obvious choice. I'd done a fair bit of research into it, mostly from this site, and it just seemed to be the perfect place for two novices to start, with many dubbing it the "easy" Munro.

Thus, sunday morning came, the weather was looking better than expected. No excuses! We arrived at the Forestry Commission car park just before 10am, and were almost immediately bombarded with midges as we opened the doors. As I was spraying midge repellent outside another car came in and parked, and the driver jumped out and ran over to me to plead for mercy and some midge repellent! 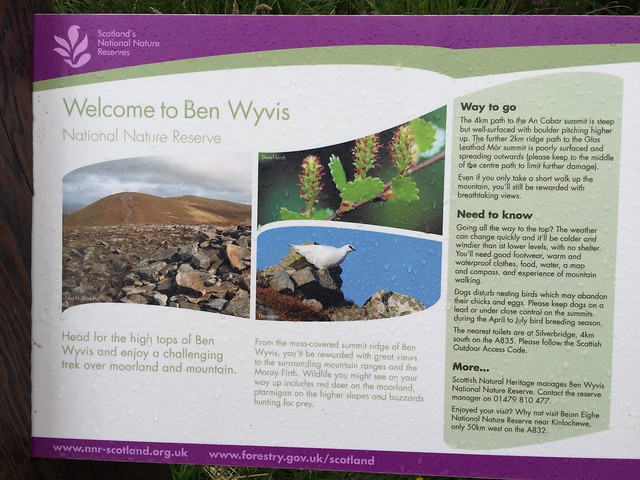 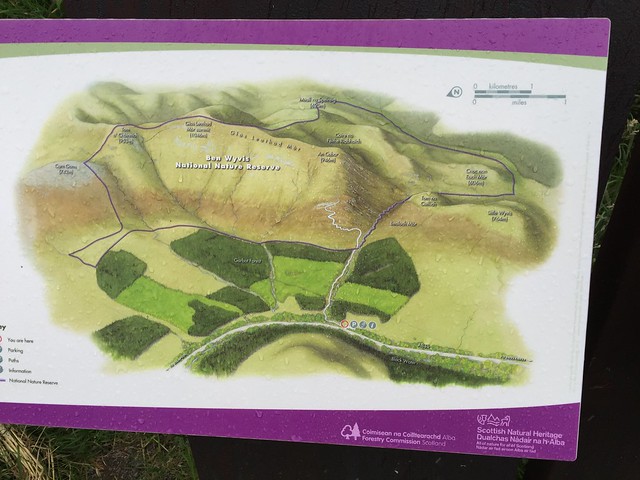 As I said, I'd done my research on Ben Wyvis and had the rough idea that there was 3 stages to it: the undulating part going through the wooded area at the start; the steep climb up to An Cabar; the relatively easy bumble over to the summit of Ben Wyvis. With hindsight I would say there's probably an extra stage between the wooded area and the steep climb, with a gradual climb from the woods up to the "Staircase to Hell".

If I'm honest, after about 5 minutes of this walk, I was starting to get worried. I'm not sure if it was the heat or the path or what, but we were both sweating quite hard already! The wooded area seemed to keep going on and on, and we both had to strip down to t-shirts (in september for goodness sake!). Luckily we were in no real rush, and were able to take the odd break as and when we needed (regularly). We were aware it was supposed to start raining about 16.00 so we were looking pretty good for beating that.

Finally we were out of the forest. It was probably only about a mile, but the constant ups and downs (and I'm sure we had a brief spell of tropical heat) were beginning to grate. Finally we could see An Cabar. And that's when we started to laugh at ourselves for attempting this! It's when we actually saw just how steep the ascent to it was. Despite our apprehension, we carried on. Continuing to just take the odd break here and there, and turn round to admire the already impressive view. After a little over an hour since leaving the car, we reached the dreaded steps. 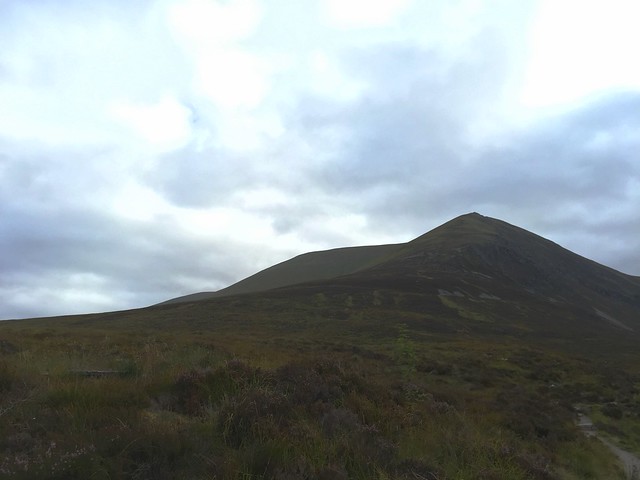 Our first real look at the day's goal

It's hard to fully convey what the steps are like, without being terribly dramatic. It's not helped by seeing 2 or 3 false horizons, and a couple of points where it zig zags and takes you very close to the edge of the ridge. I can appreciate that in many ways, the addition of said steps makes some people's lives a lot easier. But my God, some of those steps are high! Regardless, like before, we kept plodding away. Taking in the fantastic views of Tom na Caillich and Little Wyvis. I think we took one 10 minute break at this point. It seemed that we were getting really lucky with the weather and visibility. It was pretty demoralising at the number of people who overtook us at this point, and we were wishing we had a pair of walking poles to help drag ourselves up. But we were getting there! 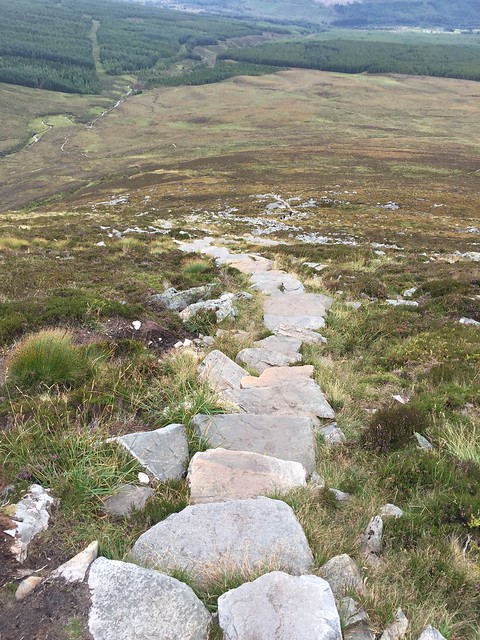 Looking back, westardly, down the steps and towards the forest and car park 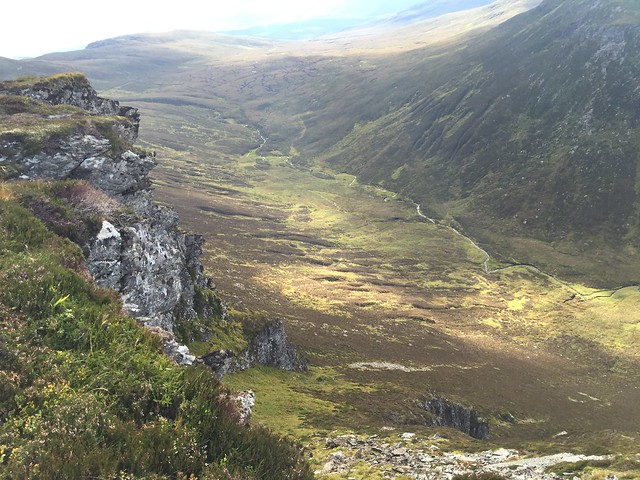 Down in the valley between Ben Wyvis and Little Wyvis

Panorama shot of south-west from the top of An Cabar

After reaching the first real false horizon, the ascent seemed to mercifully let up slightly, and we could see the cairns and people lunching at the top of An Cabar. Even more mercifully, the walk along the ridge to Glas Leathad Mor (the summit) looked like a walk in the park. And it was. At this point, I want to add, all the people who had brushed passed us on the way up An Cabar were catching their breath at the top, or already on their way back down, having not gone to the true summit. Amateurs....! At times the wind died right down, and it was so blissfully peaceful and quiet. Looking up, it felt like we could almost reach out and touch the clouds. Already the ascent felt worthwhile. 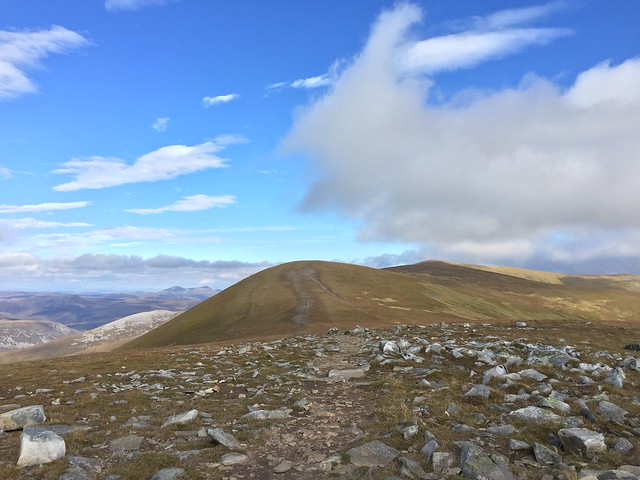 Looking north-east along the ridge, towards the summit

The sense of joy upon first laying eyes on the trig point at the summit, and actually getting there, were like a shot in the arm. A real sense of triumph and accomplishment. We basked in our own glory for a couple of minutes, taking in every second (another couple were hot on our tail!) and admiring the view in every direction. Straining our eyes to see if we could distinguish Inverness (not really) and marveling at how colossal all the oil rigs looked in the Cromarty Firth, even from all this way away! We grinned and nodded at the two women who arrived shortly behind us, and then eventually I got the whiff of cigarette smoke. I have to say, what a disappointment that was. After feeling so at one with nature and invigorating my lungs with the beautifully fresh mountain air, only to have someone burst out a fag to reward herself, I was honestly disgusted. But I guess everybody is different. 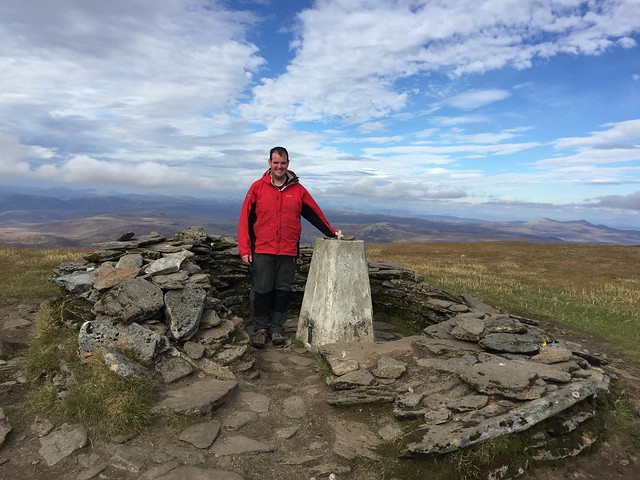 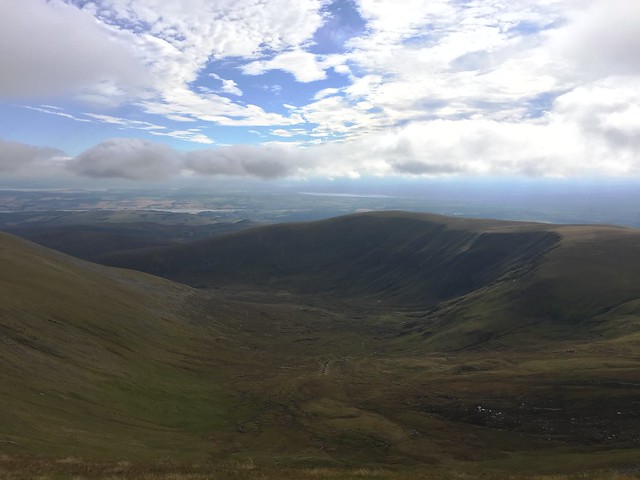 Looking south east, from the top 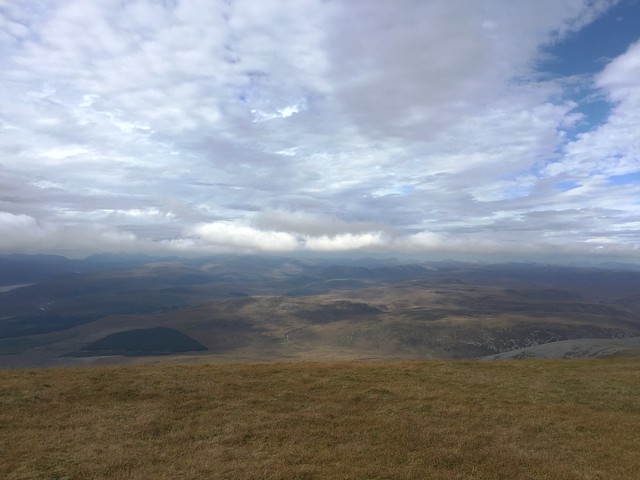 Looking out west we could see the darker clouds creeping closer, so we figured we'd best not hang around too long! Back along the ridge, over the hump that is An Cabar, and navigating those darned steps again. They felt almost as bad on the way down! A slight exageration perhaps, but it wasn't easy going, and treacherous at times, with loose rocks. But once off the steps, it felt like the home straight. Back to the burn and the forest, and almost right back where we started as the rain clouds really started to open up. Which to be honest, was quite well received at this point! 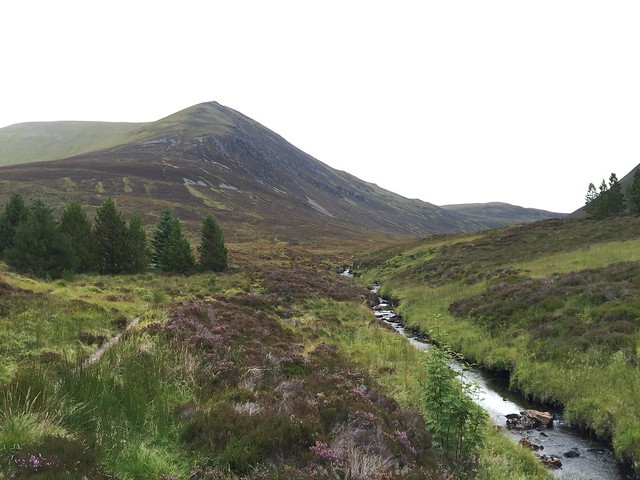 Returned to the burn, looking back, triumphantly!

We've been hurting a bit in the 2 days since our climb, but I've already got my head in the maps trying to decide what's next!!

Nice walk report, and well done on bagging your first Munro. Ben Wyvis was my second Munro, but I didn't get much of a view as it was pretty wet and cloudy when I was up there.

Well done on your first Munro - and hopefully first of many! I was up there last summer with 4 of my grandsons and as you can imagine the giant steps were quite a challenge to the 3 and 6 year old legs!

I was on holiday recently in beautiful Beauly and managed to sneak off one day to do Wyvis. The weather had been great all week and I wished I could have done some of the Ullapool hills but didn't feel it was fair on my children!
I enjoyed my day thoroughly - very straightforward - but found it amusing that lots of people seemed to think An Cabar was the summit so they went down after reaching it, obviously not realising they had to continue along the plateau to the proper summit. It was extremely windy that day, with the plateau in cloud till mid day, and they'd done all the hard work getting there, so perhaps I should have let them know

The views are the best bit so it's great that you got the weather to enjoy them. Lovely report and pix

Welcome to WalkHighlands and congratulations with your first munro!

I shall be prepared for the steps but what great views! I’m looking forward to the report of your next hill. It seems you have not only been bitten by midges!