3:30am... Didn't need an alarm clock to get me out of bed today. A great weather forecast and the thought of a day out in the hills might just have been enough to wake me. In case that failed, however, our 3.5 month old daughter kindly made sure I was awake, in need of her middle of the night feed at that time. An hour later I was in the car, as the rest of the family had all returned to their slumbers.

Always like to start a walk around sunrise if I can. Both for the peace and quiet of the still morning air and for getting ahead of the crowds (I can be all smug on the descent as many others are making their way up

It was a dark and quiet drive over to Braemar. Deserted roads. Only the occasional passing set of headlights in the patchy mist, delivery trucks mostly. Some wildlife, although more often than not just the glowing eyes of a domestic cat. A large herd of dear on the road to Linn of Dee provided the most interest. Before I knew it I had arrived at the car parking at Glen Quoich, shortly after 06:00.

Darker and colder than I was expecting: 45 minutes till sunrise says the GPS and 1 degree says the car thermometer. I sit for 10 mins enjoying the rapidly diminishing warmth of the car, munching on a banana and drinking some fruit juice, before getting boots and coats on. By the time that was done it was already much brighter; my head torch could remain stowed at the bottom of my rucksack. It was time to set off.

I'd been looking forward to walking Beinn a'Bhuird. Not sure what it was, there are so many alternative walks that could get my munro count up more on a day like this. I think it was one of the first walks I'd read about on this website and it just kind of stuck with me as one I had to do soon. (Gulvain is the same and is also high up the list.) Why ever it was, I was very glad to be starting this journey. 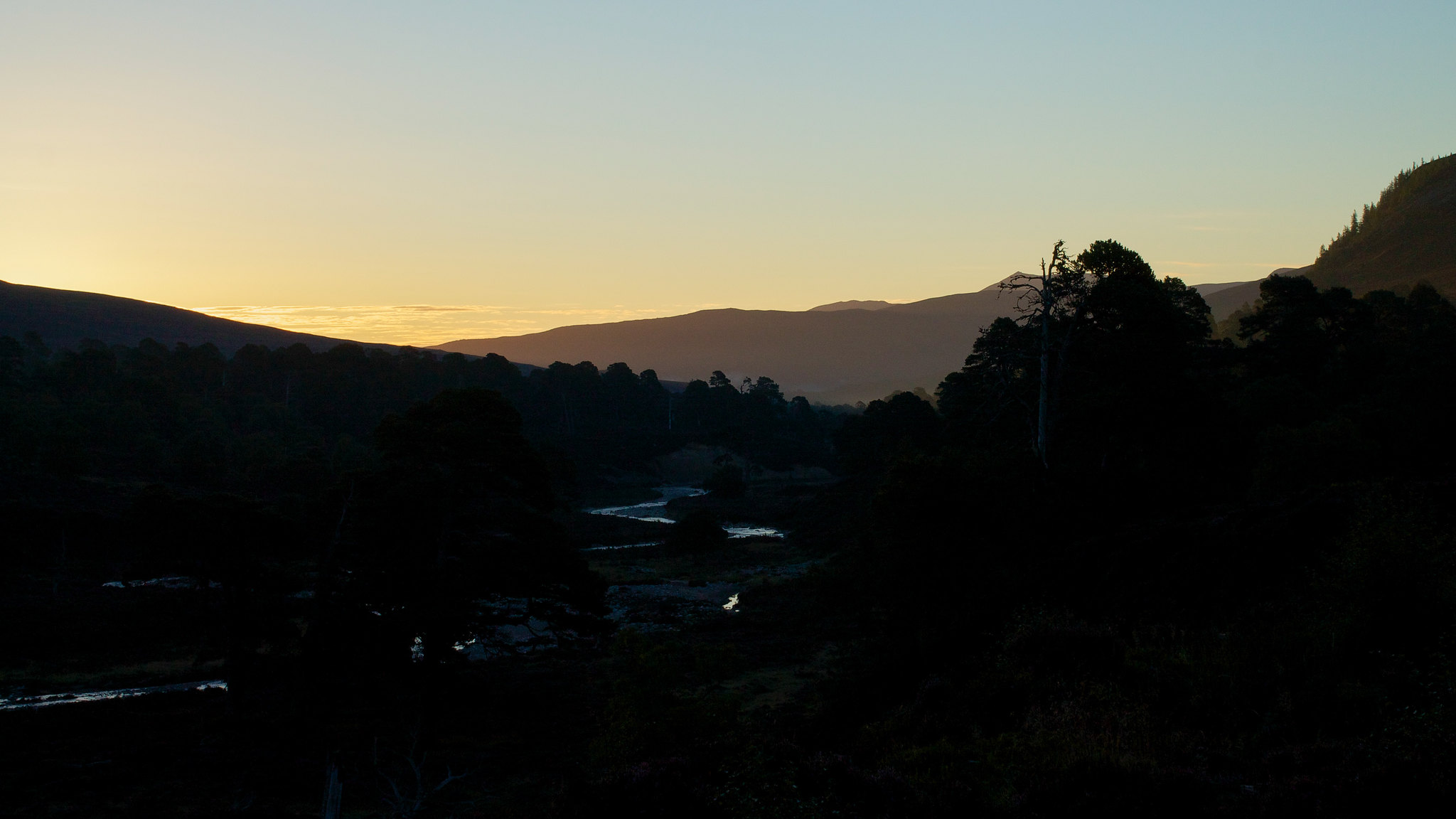 Of course, it wasn't long before my hat and gloves were unnecessary, shortly followed by my top layer. A quick stop to stuff these into the backpack and I continued my way through some lovely woodlands at start of this trek. The first signs of autumn's impending arrival is there for all to see in the yellowing edges to the leaves. Another summer at an end I guess.

The quiet glen in the early morning light really was marvelous. Small whisps of mist hung, quite still, just above the gently flowing river which provided the only soundtrack to accompany my own footsteps. Thinking back I can't even recall much birdsong in the glen.

After a while the mountain finally reveals itself, the sun lighting its eastern slopes. Unlike others I've done so far, Ben More most notably, my first impression upon seeing it is not of the climb that lies in wait, indeed it seems quite a gentle proposition, but how far away it still is. That, and the knowledge that the summit of the north top was still well out of sight, had me quickening my pace along the glen. 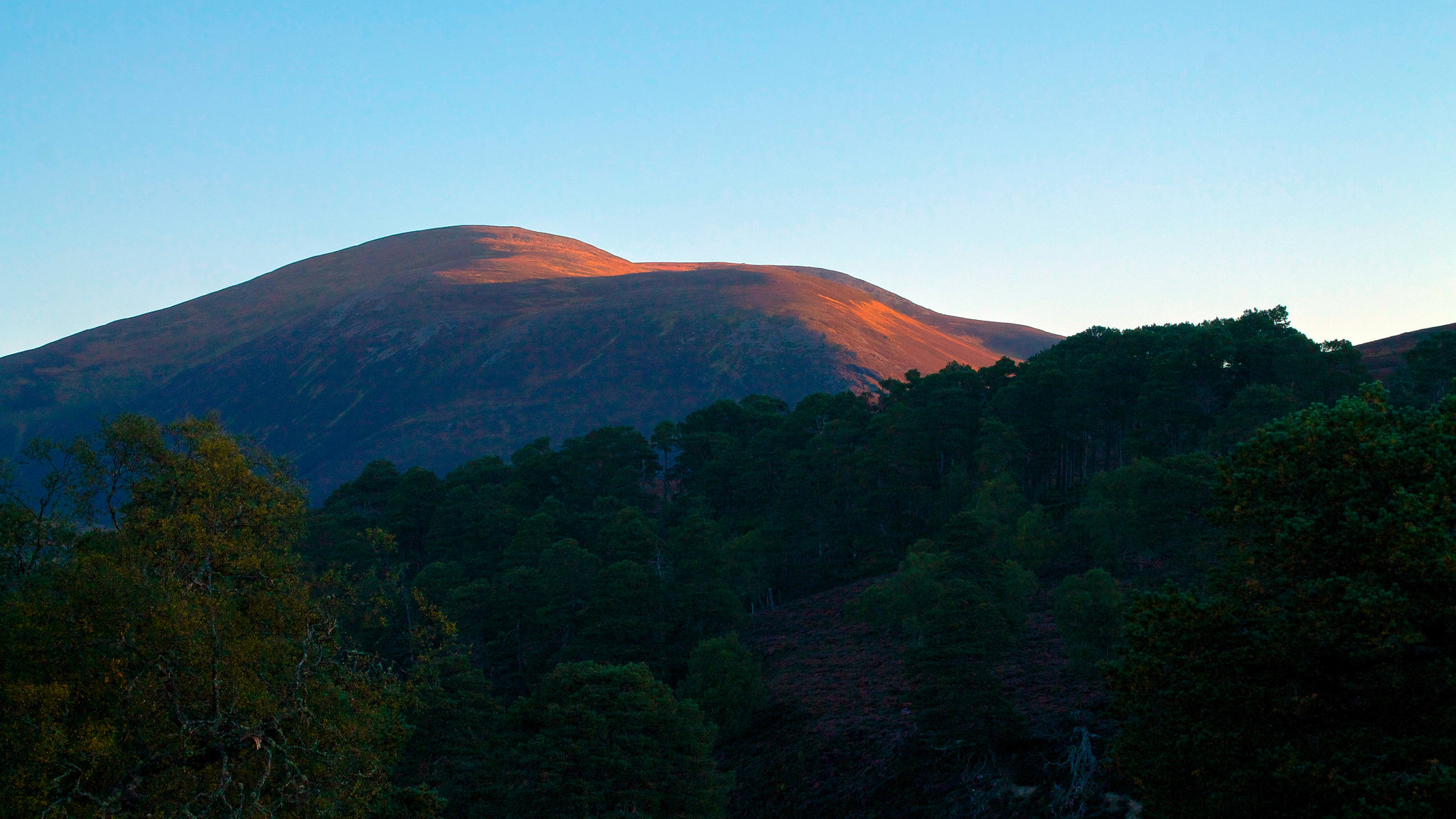 The morning light on Beinn'Bhuird 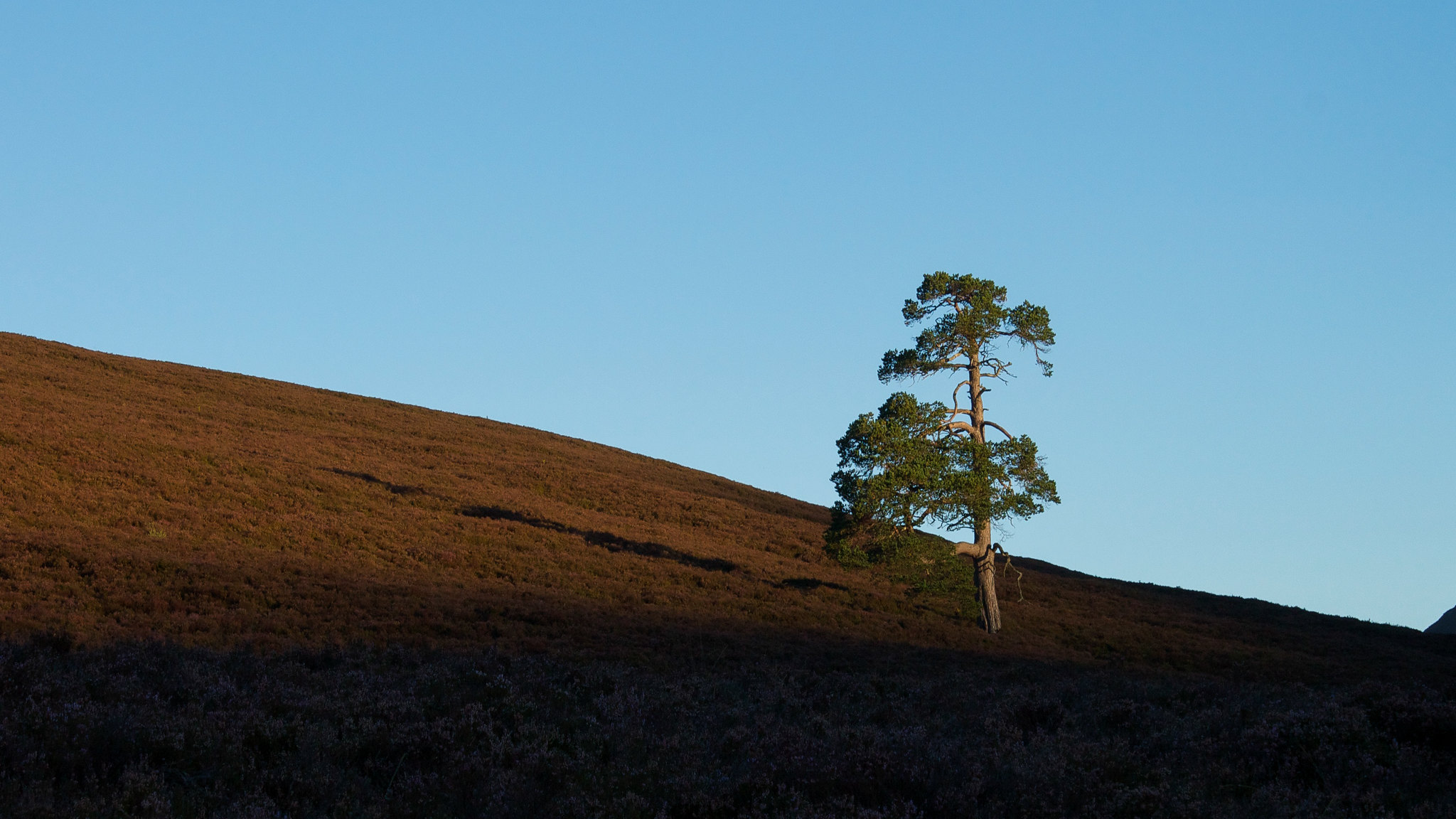 Old pine on the hillside

It's a long walk in. I'm quite enjoying it in this direction, but know I'll be wishing for a bike on the return. By this time the mountains ahead are brightly lit up by the rising sun. Beinn Bhreach, straight ahead of me, especially so. It's almost tempting to make a last minute change of plans and find a way up there instead. 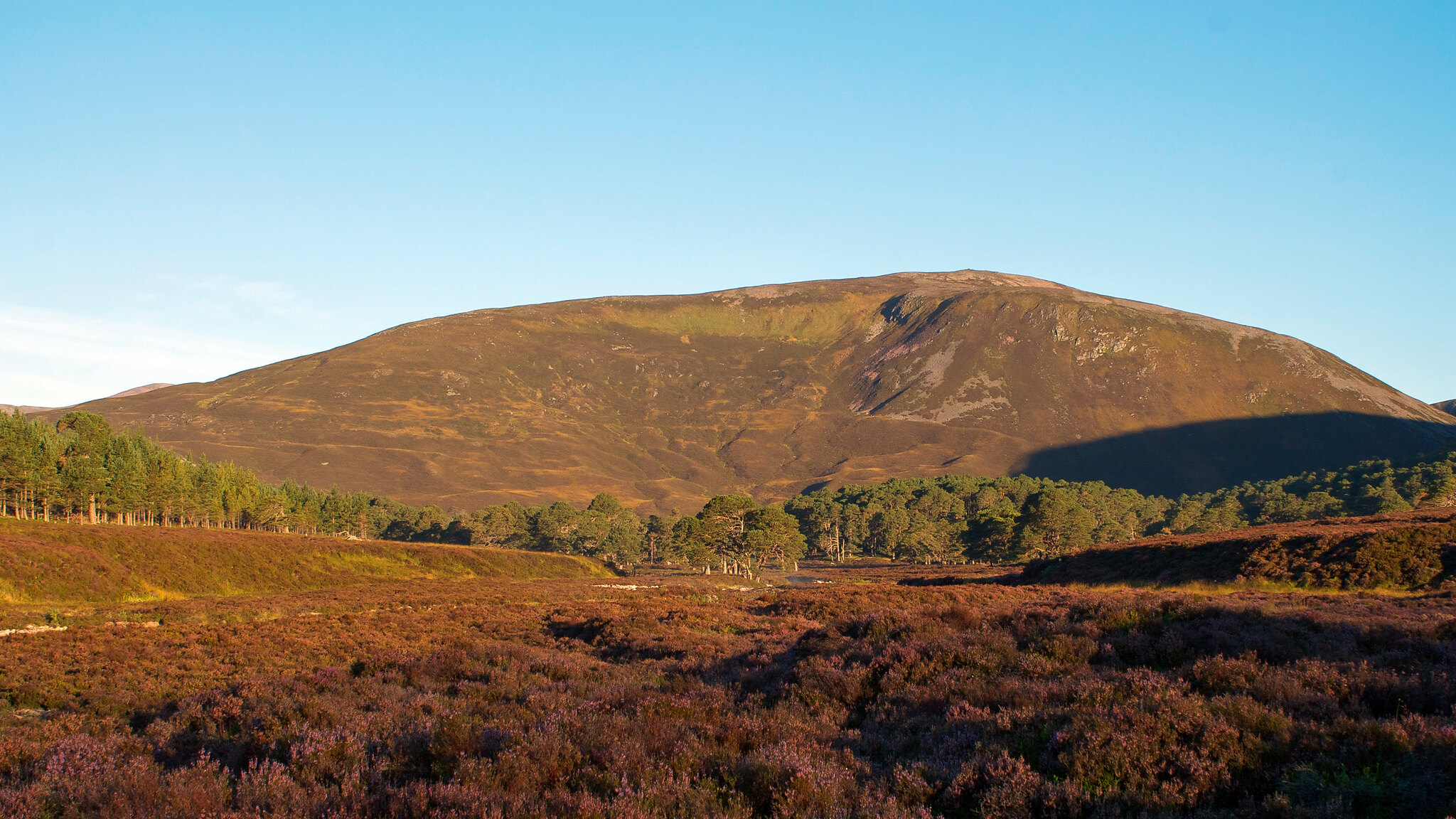 However, I stick to the plan and keep going for Beinn a'Bhuird. 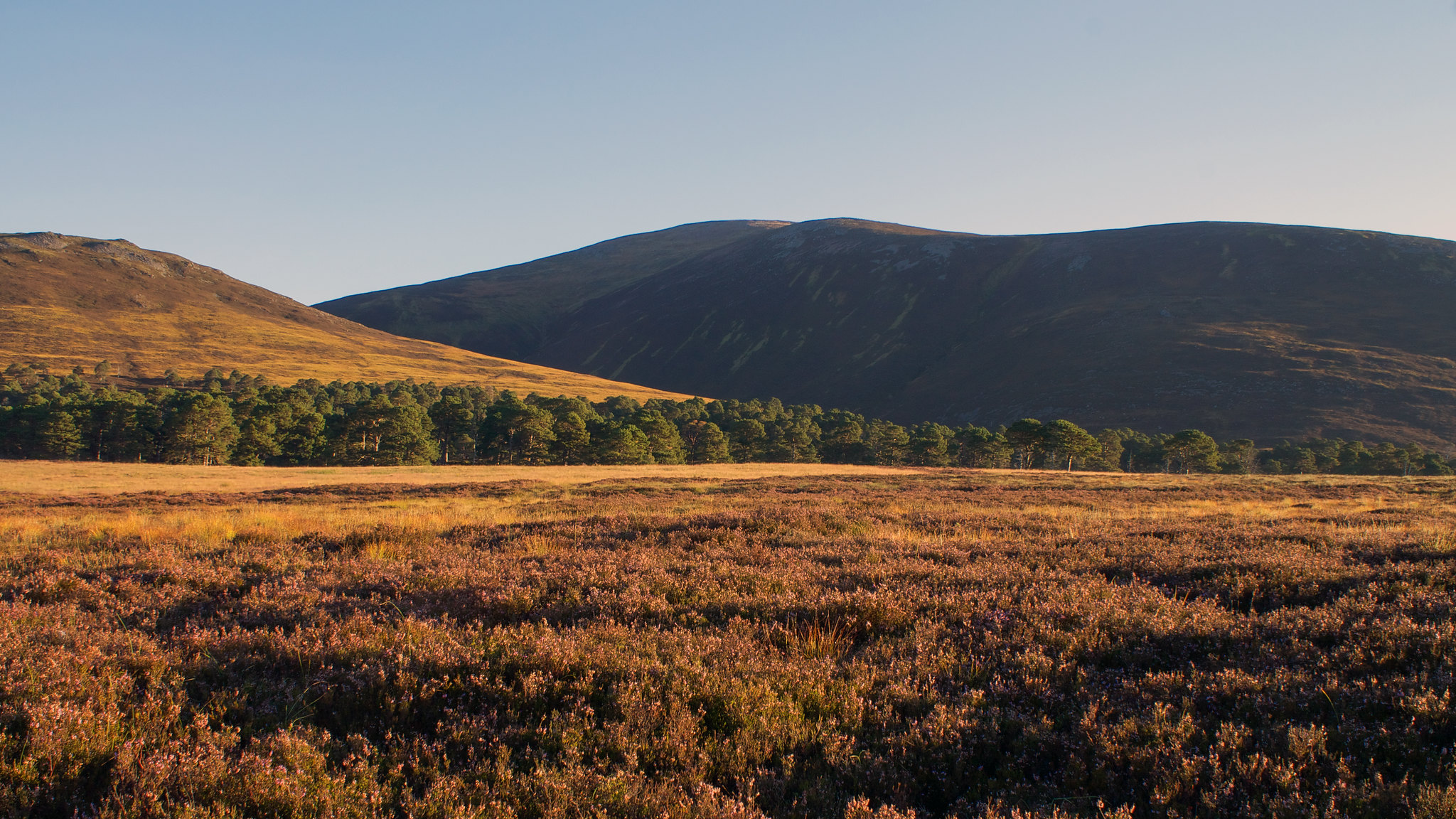 Beinn a'Bhuird from the South

7.5km in and finally at the river crossing. It's an easy hop over today, with the river flowing low. Boots left on and feet dry, I treat myself to a small handful of jelly babies before starting the journey uphill. 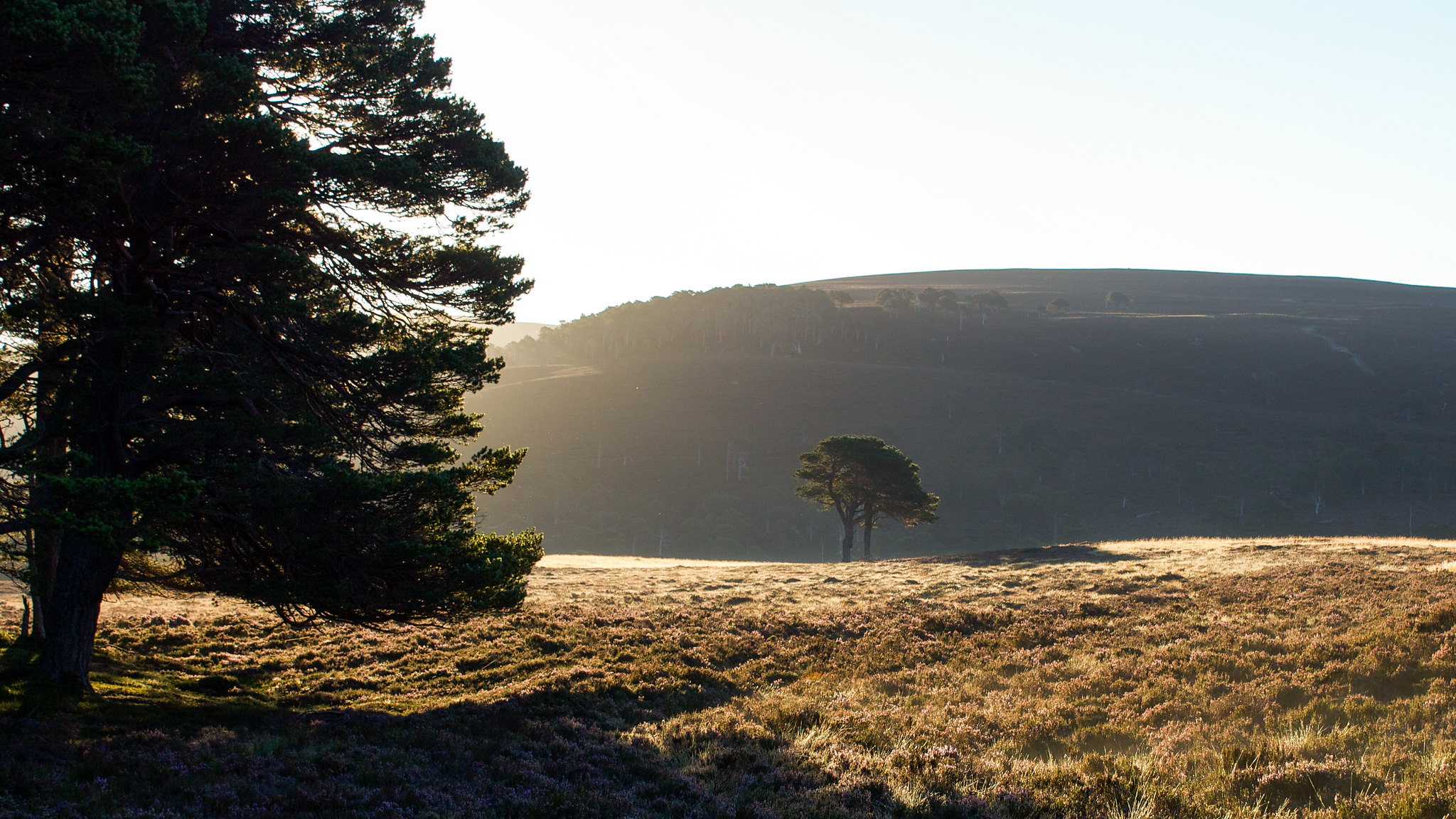 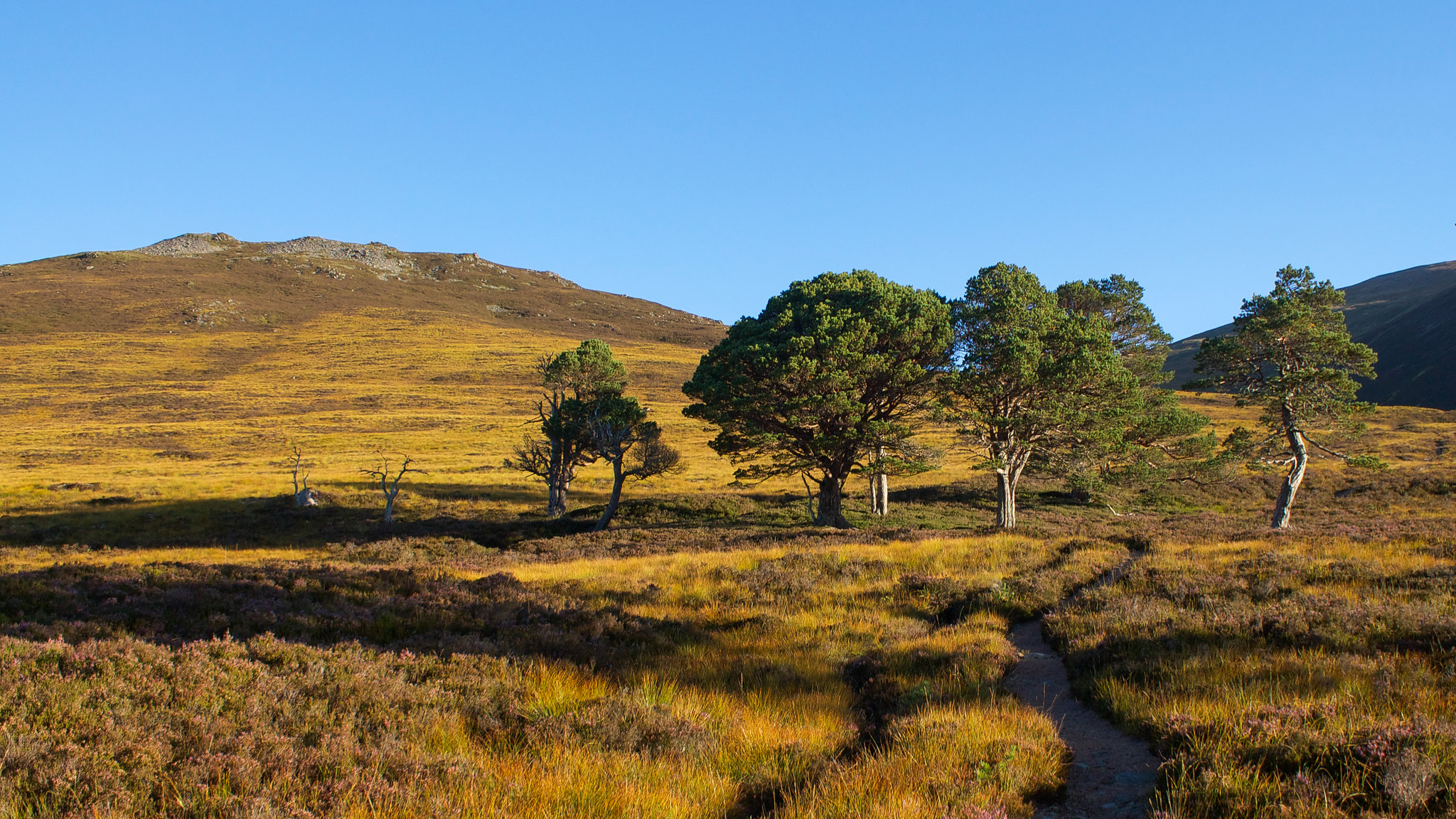 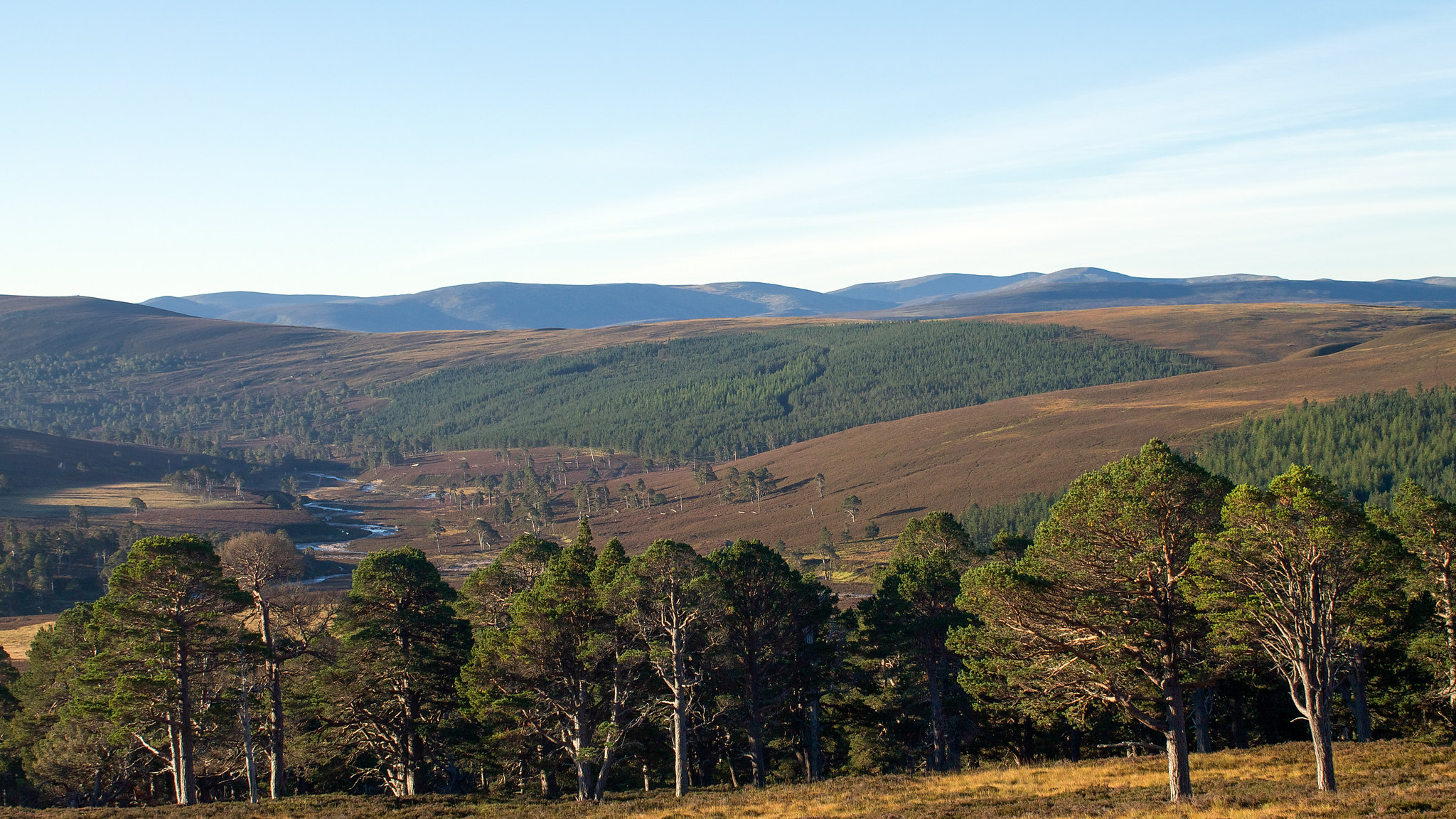 The walk up through the last of the pines and on the path along the side of Carn Allt na Beinne was hugely enjoyable. Fresh legs, plenty energy, good conditions: the highlight of the day and the time just flew by along this stage. I was warmed very nicely by the sun, but not too much. Again, so quiet along here. The occasional grouse taking flight as I approached shook me from my trance every so often. 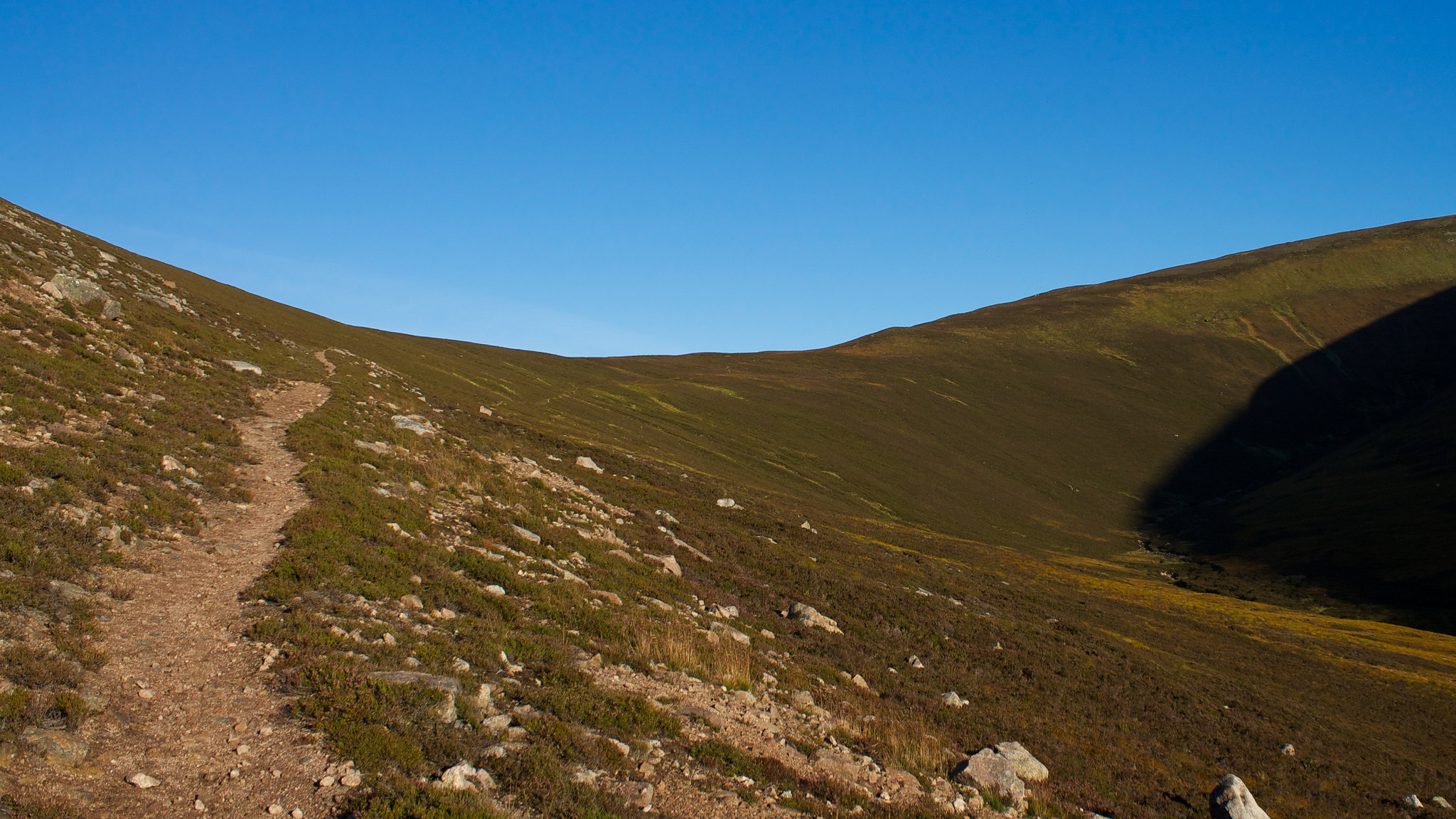 Shortly after An Diollaid I was soon on the massive plateau area. Away off in the distance, up the top, I saw two figures against the skyline. First sign of any human activity here today.

By now it was just after 9am and the 3:30 wake up was starting to hit me and I suddenly felt pretty tired. I decided to stop for a short while and treat myself to a bowl of cornflakes.

As I sat munching on my cereal, looking southwest, I had a clear view out to the summits of my last Munro outing on the Beinn a'Ghlo range. Certainly a much nicer day than when I did that climb in back July when I had no view from any of the summits.

After getting going again it seemed to take an age before I was finally looking down into Coire an Dubh-Lochain. A quick turnaround to look back showed it was a fair old walk on the plateau to get this far. Only 1km to the summit now. 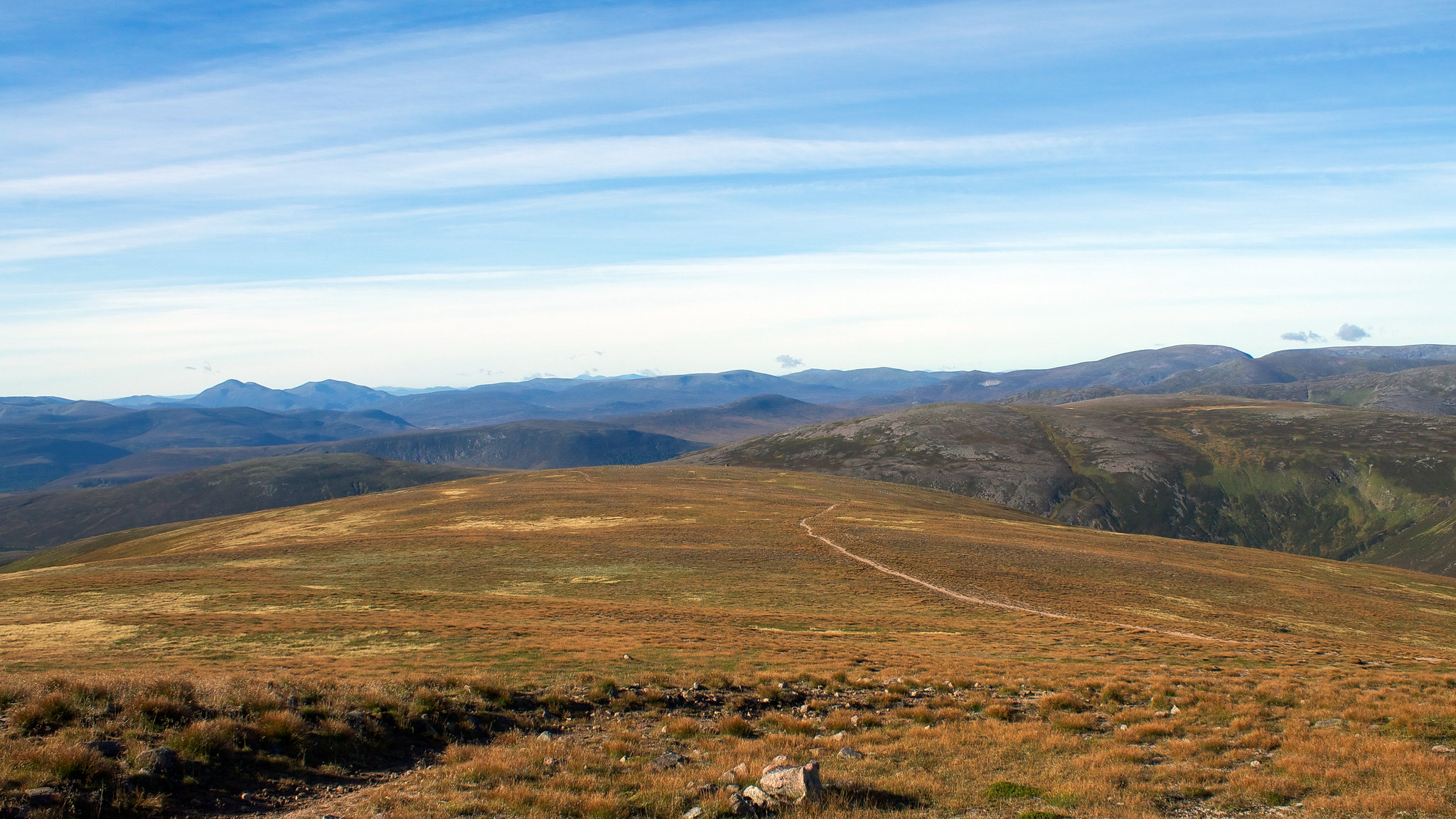 A great walk along the top to get to the summit of the North top. Took me a while to spot the cairn up ahead, but I was soon enough there. Dumped by bag on the ground by the cairn and lay down in the warm sunshine, the cool ground soothing my warm back. So peaceful, so calm. I was soon dosing off. Must have napped for around ten minutes or so and even after that I just sat for some time by the cairn. It may not be the most dramatic of summits, but the experience of just being there, in that weather and absolute silence, with the views over to Ben Avon and the rest of the Cairngorms will long remain with me. And I had it all to myself.

Ben Avon was just over there... so tempting. I had the time, but not sure of the energy. If I had taken a bike for the journey through Glen Quoich I may just have headed over there. 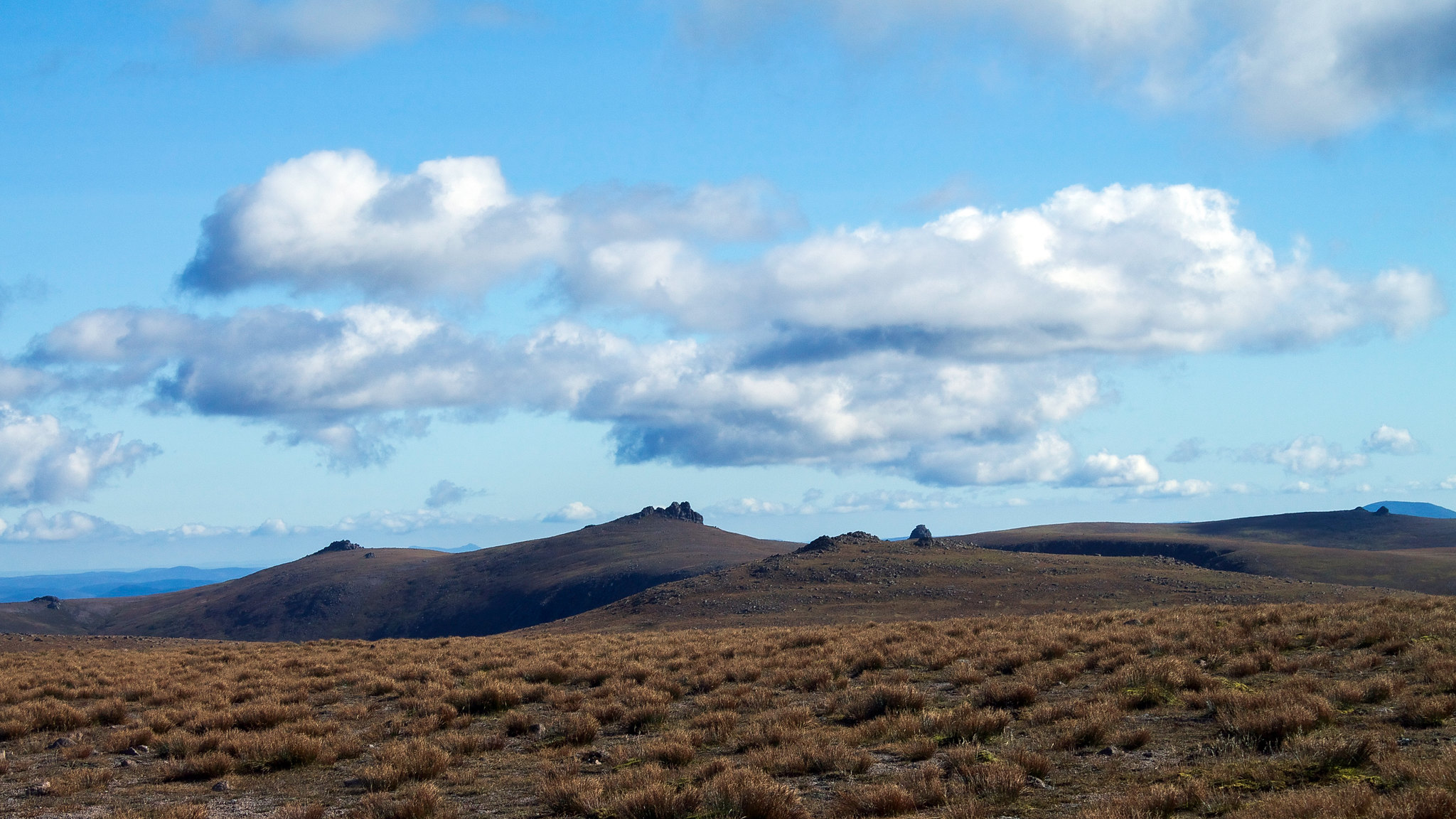 But that will just have to wait till another day. Instead I remained at the summit here for a short while longer to eat up some sandwiches before getting ready for the trip back down.

Retraced steps along the edge, stopping again to take in the views down into the corries. 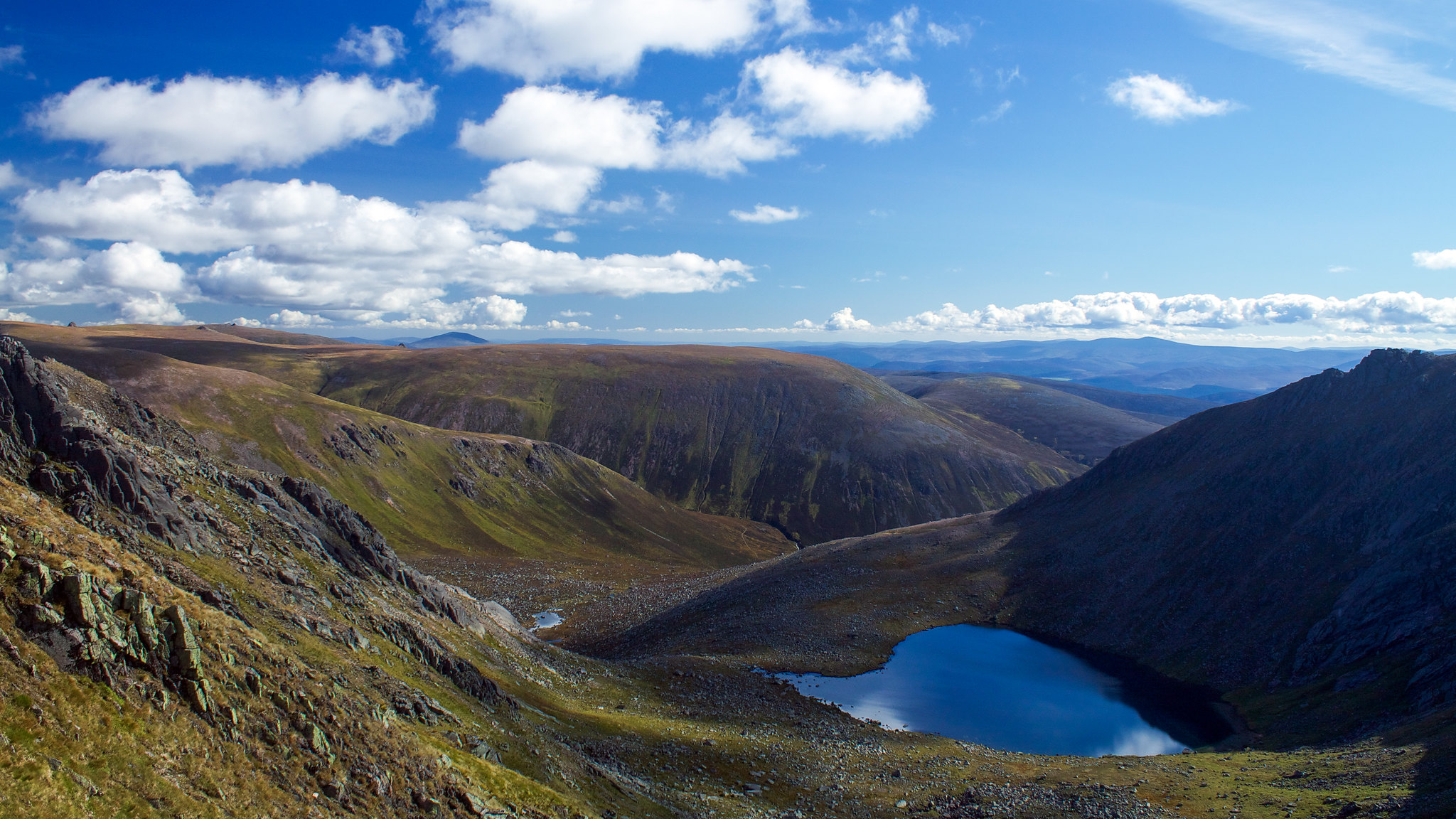 And the views over to the massif ahead of me. Just brilliant.

The Cairngorm plateau from Beinn a'Bhuird 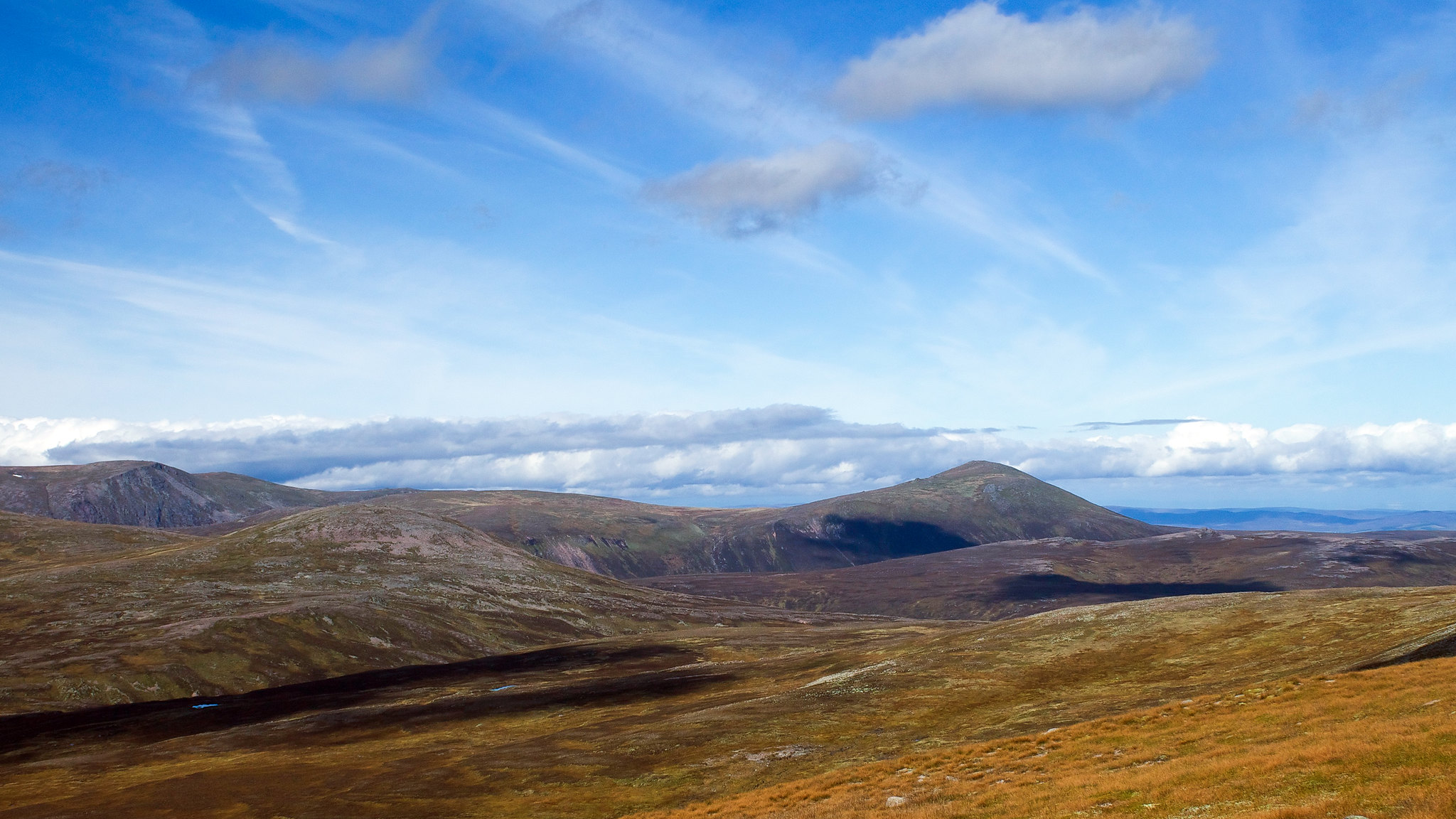 Met a steady stream of people climbing up. Perhaps not as many as I expected given the weather.

As expected, the long walk back down Glen Quoich seemed to take forever. I was glad when I eventually arrived back at the car.

Overall, a great day out in the hills. I did a similar distance earlier in the year, but it really seemed to take it out of me today. I guess the early start and not being able to get out on the hills much this year are taking their toll.

Ok, time to start thinking about 14.

Brilliant photos of the early morning light on what looked like a terrific day to be out in the hills. The views from this hill on a good day are superb (this brought back great memories from last year).

Coming from Ben Avon I walked past the cairn marking the top of this hill not realising it was the top (I think I was too busy looking at the rock formations ahead of me).

This is a hill to savour. Great report and pictures!