Now he has turned 8, I had to give in to requests from my son Dougal to go on a proper mountain adventure. Up to now he has only had a trip up the local hill of my childhood, Benachie, and lots of scrambling on rock at the beach in Banff where I grew up. So together with the more experienced Oli we planned a boys adventure and set off for a weekend of mountains and camping.

The walk selection had been carefully chosen to meet key criteria:

1. It had to have plenty fun, not too exposed scrambling to keep us all smiling

2. It had to feel like a day on a 'Proper Mountain', as we were going to be proper mountain men!
3. It had to be flexible enough to cater for any potential tired legs or boredom - so getting straight into the fun, exit routes and potential to extend or shorten the hike were important.

Based on previous WH reports, I selected a route up Fleetwith Pike and round to Haystacks which seemed to fit the bill, and it was the perfect choice. If you are looking for a trip to get someone hooked on the whole hill walking experience this is perfect.

Before we even got there we had ticked off number 2. The drive over the Honister Pass is exciting, and a stop to look at the tiny colourful dots which were people on the Via Ferreta was enough to convince the boys that this was a proper mountain. It really helps show the scale of the mountain you are about to take on.

After parking up a Gatesgarth Farm, the climb starts pretty much immediately up the obvious path towards Fleetwith Edge. First stop of the day was at the memorial cross for Fanny Mercer. This gave the first of many opportunities for a quick scramble and a great prompt for a chat on mountain safety. It also yielded an unexpected geocache!

After that the main edge was gained quite quickly, and we made good progress over the succession of short scrambles and grassy sections towards the top. All the way there is a good path, but it offers plenty of obvious hands on sections to bypass it, which we made the most of. 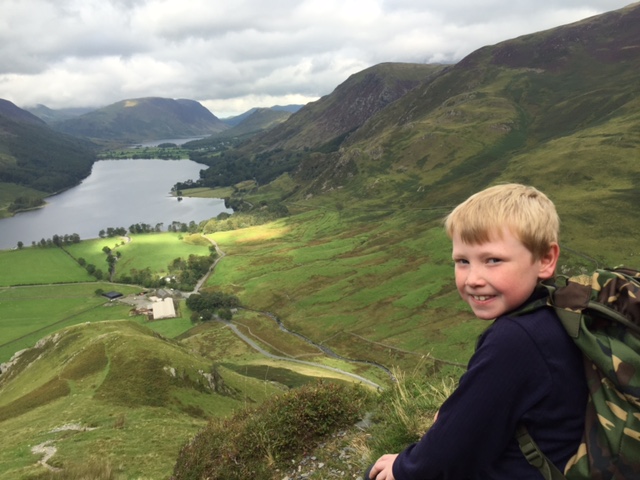 Taking a Breather on Fleetwith Edge

We kept the pace up well assisted by having a couple start the route a little while after us. From then on we could pretend we were spies and they were in hot pursuit. Always useful to get us going again when we had a short break!

Along the way, it is possible to make out the roof of the Warnscale Bothy across the valley above the path back down to Buttermere. 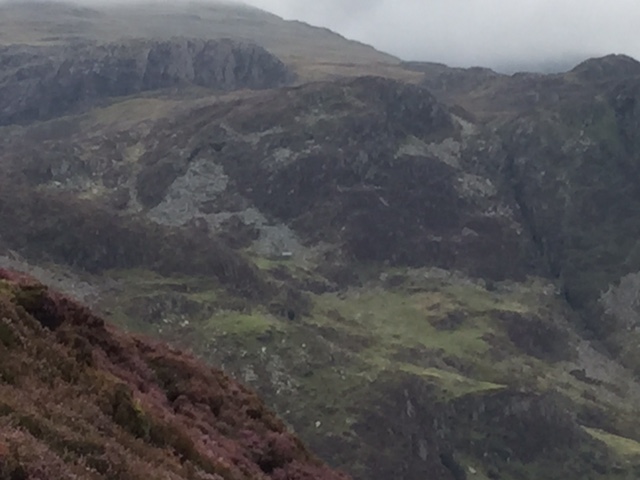 The top is reached after a series of false summits, and is a very fine spot to look back and admire Buttermere, and look ahead to the very different view down to the quarry and beyond. 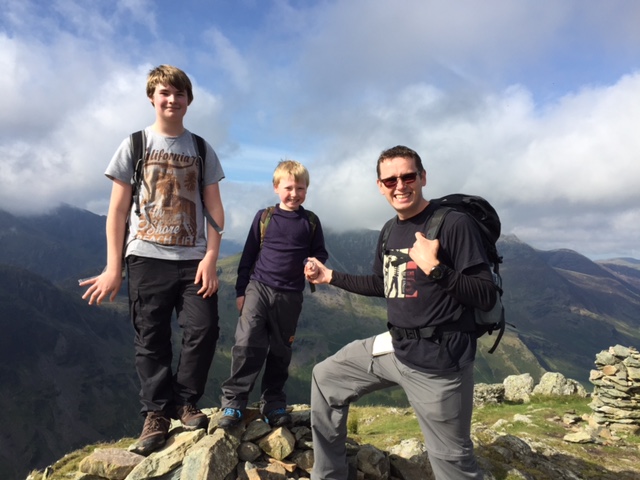 At this point I had two happy boys (and one happy dad), and we set off across the top to check out Honister Crag making the most of the scrambling opportunities along the way. We agreed that climbing mountains was fun, and everyone was up for extending the route to take in Grey Knotts and Brandreth before heading to Haystacks. So off we set down to the quarry and tramline - a very different walk, and very different views from the route up So was the quarry careless and buried a shed, or have they dug up a prehistoric corrugated iron building???

From the tramway, we followed the path up which bypasses the summits of the two hills we are after in search of a stream to fill up water bottles for our proper mountain men lunch (pot noodles). At the likely point in the path it did indeed cross the infant Dubs Beck, and having filled our bottles, we started straight up the hill to the mid point in the ridge between Grey Knotts and Brandreth. This was a bit of a slog, off path, but motivated by the promise of pot noodle at the next summit we made it to the ridge. From here it is hard to see that there is much drop to justify these being two different hills, but still they both count!

Hard to know which of the 'Knotts' is the high point on Grey Knotts, but we conquered the first one, had lunch and then explored the others just to be sure, unencumbered by rucksacks for a while. No hardship in trying out all the Knotts as each gave a little scramble and plenty of fun. 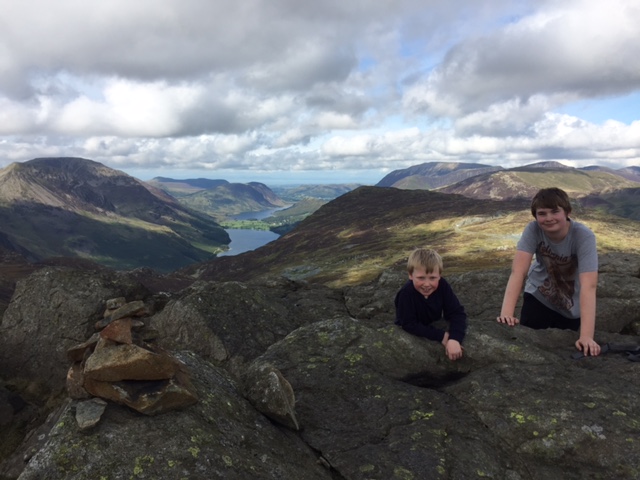 Grey Knotts is not the best mountain in the lakes, but it has a fun little summit area, and was as peaceful a spot as we found all day so it made a nice detour. Not sure I would say the same for Brandreth a fairly short way away, which despite being the high point of the whole walk, was probably the low point for excitement and interest. It is a fairly featureless hill. Its best point is its very fine views of Great Gable and all the other mighty fells around, but for us many of the tops were obscured by low cloud 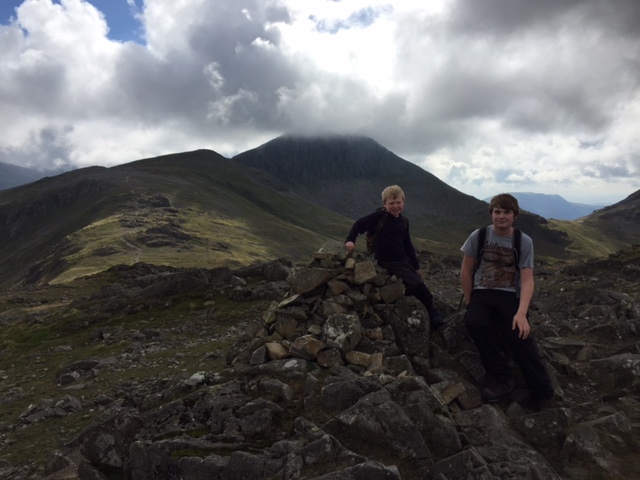 From this summit, the top of Haystacks is hidden by the round body of Brandreth. That gave a good opportunity to practice some map and compass work with the boys to find a heading to something they could see on the map, but couldn't see from where they were. Having done that we set off, descending and traversing our way towards Haystacks, sometimes on a path, but more often not. This was quite tiring stuff and felt like the hardest work of the day in many ways. Until we crossed the path coming up from the Black Sail Hut, and found a lovely little beck tumbling down the mountainside. Here it was a case of boots off, JetBoil on, for a pleasant break in patchy sunshine with the boys soaking their feet by making little dams to fill up pools. 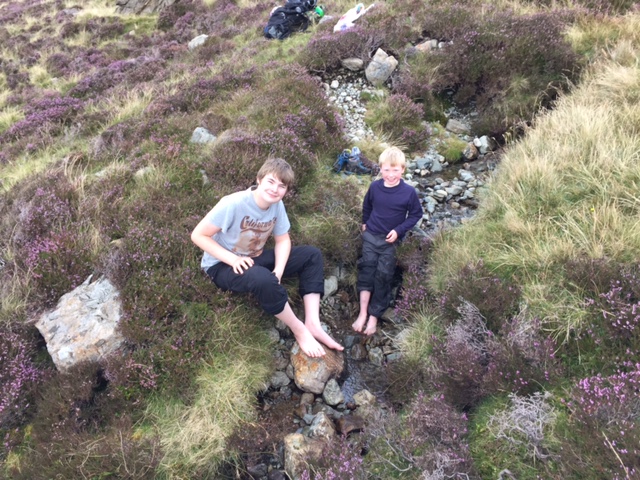 This is the Life!

Break over we headed on through the boggier section towards Haystacks. Once across the 'saddle' and onto Haystacks, the best fun of the day started, with its constant stream of small rocky 'stacks', each offering the chance to have a scramble, and a naming ceremony for these previously unconquered mighty mountains (if they aren't named and shown on the map, it must mean no one has ever climbed them right?). These, together with the breath taking crag views from the edge, the remarkable balance stone to clamber over and the series of pretty tarns make it easy to see why this would be the great mans favourite hill. If you haven't visited it yet, put it high on the 'to do' list. 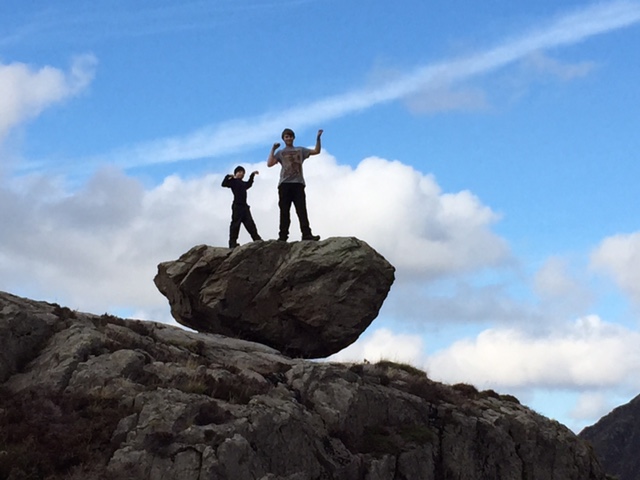 Atop the Balance Stone

By the time we got onto Haystacks, we had been on the mountains for about 6 or 7 hours. And done a lot of climbing and exploring. But I would say 'scampering' was the appropriate word to describe our path across this lovely hill. Its the sort of place you want to keep going on and on, but eventually we reached the summit, congratulated each other with mountain men high fives, and started down to Scarth Gap and the path back to Buttermere. The descent is actually quite tricky. Not one to try in fog I would say, as it has a series of pretty serious drops, and a very convoluted path until the saddle is reached. The boys made the most of some of the less exposed scrambles, but I must confess age caught up with me here, and I stuck to the path. The path back down to Buttermere wasn't the best. But going downhill never is. In this case the path was just not quite the right kind of stones to be gentle with your feet and legs, and it was wearying stuff. It was however raised by a fairly unique rock bench, which could have been designed to give you a bit of a break along the way. 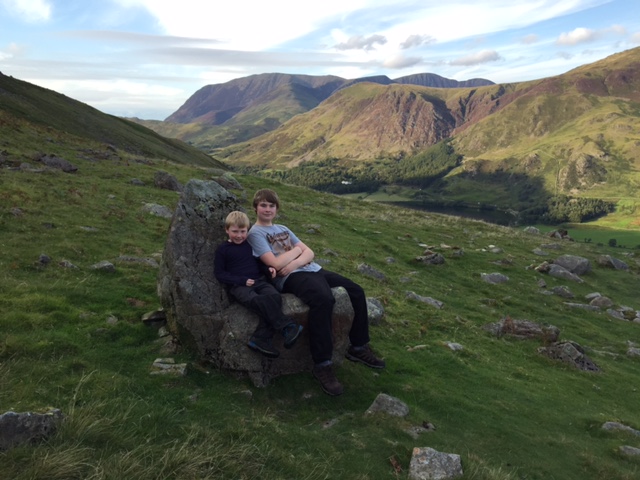 And of course by the rather wonderful views of pretty much the whole route we took looking back.

The Whole Route - Brandreth Just Peeping Over In the Sun

All in all a fabulous mountain adventure.

What a fantastic day George, not just for the boys either...for all of you

The youngest lad did a sterling job at 8 to take all this on and still be scrambling on the final descent. One for all of you to remember I'm sure and some great shots to remind you just how good it was

The perfect day! Great memories for you all.

I've always done this the other way round, to enjoy the descent down Fleetwith Pike to Buttermere, one of the best in England, but might try it this way round next time.

The kids were troopers all day. One of those days you will remember where they don't get tired and grumpy, and everyone has fun.

Fleetwith Edge is a really good way up a mountain. Going up you still get the views - it's steep enough to need frequent stops.