Saturday morning saw me back in the Cairngorms; another trip snatched as the forecast lured us out to take advantage of the year’s dwindling stock of good days. I’d been frustrated the previous week, having been blown off the Moine Mhor. After Sgor Gaoith and Mullach Clach a Bhlair, I’d shunned its companions to the east, but had been fascinated by the trench holding Loch Einich.

So, cycling in from Whitewell all the way up to the loch would suffice to satisfy my curiosity of this apparently spectacular glen, and provide the opportunity to approach Braeriach from the west. Rothiemurchus Caledonian woodlands - some more alive than others Progress up Gleann Einich towards the spine of Sgoran Dubh Mor

Shortly after 9.00am I wheeled the bike down to the track, grateful for an earlier post on Walkhighlands about the landslide in Coire Dhondail. Estate notices attempted to discourage an ascent by this route but scottishkennyg had reported that it was passable with care, and his photographs didn’t make it look too disconcerting. Worse was the low-level diversion cyclists are encouraged to take alongside the Am Beanaidh to avoid erosion: with little regard to the skeletal erosion suffered as I bounced from stone to rock to clump of undergrowth by the trackside. It was hardly the best of tracks for an inexperienced and infrequent mountain biker, and my town hybrid took an aversion to the juddering it was subjected to, culminating in the disintegration of my front brake.

Anyway, after seventy five minutes’ pedalling I had emerged from the charms of the ancient Caledonian forest, hurdled a pair of fences on a bridge like an equestrian cross-country course, forded the river and arrived close to Loch Einich. A faint path leaves the track and rises to join another that takes a rising traverse up into Coire Dhondail.

From below, the crags and buttresses flanking Sgor Gaoith proved to be as imposing and impressive as they had hinted from above. Ahead, in the shadows, Coire Odhar looked forbidding, while the sun caught the western lip of Coire Dhondail, suggesting a bowl of sunshine waiting round the corner. The path continued to rise at a gentle angle, gaining height and distance in equal measure until the threshold of the coire was reached.

Above and to the left the impact of the landslide could be made out and the path through it became clear, leading to an exit onto the plateau beyond. A new higher line is gradually being established and most of the unstable rocks avoided.

A cairn marks the point where the ground levelled out and the undulating expanse of the Moine Mhor is seen spread out across the southern horizon. To left, the slope rose up to the north east and, somewhere beyond, sat Braeriach. It’s one of those convex slopes where you’re not even treated to a false summit or two: the skyline ahead just keeps on retreating.

Finally, a view of Braeriach and the high plateau

Finally, with the ground becoming more and more dominated by the scrunch and pink hue of gravel, the cairn on the dome above Pinnacle Gully broke the horizon. Then, the whole higher plateau across to the summit of Braeriach and beyond filled the scene, with the hulk of Ben Macdui sitting across the Lairig Ghru.

Before the summit however, the pilgrimage is only complete if you’ve relished the opportunity to visit and sample the springs at the Wells of Dee.

Summit cliffs of Braeriach - Ben Macdui in the background

Just four hours from the car I joined a cluster of like-minded souls staring in to space, or more specifically, the spaces between here and there. Once lunch had been eaten, and fortified by peanuts and jelly babies, I followed the rim of the vast coires to where the ground began to rise towards Sgor an Lochain Uaine. Carn a Mhaim, the Lairig Ghru and cairn Toul from Braeriach

On the way up I’d been wondering about the time I had available, and juggling the possibilities of extending the day to Monadh Mor and even Beinn Bhrotain. So I sat on a stone and tried to estimate what ground could be covered within reason, trying to rein-in my optimism.

An imminent plunge down the Falls of Dee

I could manage one I concluded, but not both. I’d be flirting with a cycle in the dark for the last few kilometres if I pushed it. And was there any point in leaving the faraway one on its own? It’d be better to return and do both together, maybe from Linn of Dee and Glen Geusachan on another day.

It’s better to enjoy the one than endure three, was my final decision, so I contoured round to rejoin my outward route and find the cairn marking the descent onto Coire Dhondail.

As I dropped towards the edge of the coire an eerie silent drift of cloud flowed over Sgor Gaoith and then enveloped Am Bodach. Creeping towards me it then smothered the cairn marking the path back into Coire Dhondail.

Below this new ceiling I simply reversed my route back to the bike, where a brief savaging by a swarm of persistent midges ensured a hasty departure back down the glen. Well within the hour I had left the wee beasties behind in my wake and reached Whitewell and the car, satisfied with discovering the delights of Glen Einich and finally having seen off the last of my 4000ers: it had only taken me just short of forty years. 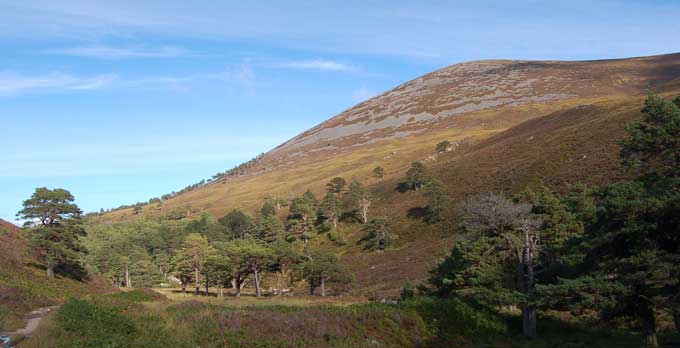 Back to the tranquil surroundings of the late summer (???) sun amidst the Caledonian pines

The northern slopes of the Cairngorms settle into an autumnal evening

The early start and a speedy return journey to Ayrshire meant that I surprisingly still kept to my rule of being longer on the hill than in the car – and there’s all too few of those left now.

Enjoyed that a lot. Your photos beautifully capture the richness of early autumn and I'll never tire of that view down the Lairig Ghru.

That looked brilliant - always interested in reports on this hill as I've still to do it, looks like next year now

Aah, a much nicer day for you than a week ago! Lovely pictures.

This hill escaped me last June due to snow and mist. A trip to Gleann Einich is in order next year!

Lovely pics and a great report on one of my fave hills!

Braeriach is a superb hill too, which you captured perfectly

Great photos and a good report. The hills will always be there

That's my motto for a few years now.