Since I was only getting 1 day in the hills this trip I said to Siobhan – let’s make it a big one! So we went for Ben Cruachan, Stob Diamh, Beinn Eunaich & Beinn a Chochuill, combining 2 WH routes into 1. Apparently it’s a 8 hour 45 minute day and cracking ridges and views were promised.

After a week of following MWIS and see it go from 90% cloud free munros to 90%+ , I left the waterproof trousers in London and headed out on the early train to Dundee to meet Siobhan.

The day started out stunning! Lovely views from the train going over the Tay bridge left me hopeful for a cracker. We left Dundee at about 7am and were at the little bridge over Allt Mhoille at about 9:15. Blue skies as we got into our boots and gaiters and just before 9:30 we were off. There is a good path and it’s easy to get started. After a wee while we came to the cairn, signalling it was time to take a right and begin the tough pull up about 800m to Beinn Eunaich. It was my first day out in a month or so and I really felt it. However, the weather was still good, the views of Cruachan in the distance & Loch Awe were stunning and just 2 hours later we were at summit one of the day. It was really easy going over to Beinn a Chochuill and we made good time. Unfortunately, talk was turning from the sunscreen we’d forgotten to the waterproofs that were left on purpose… 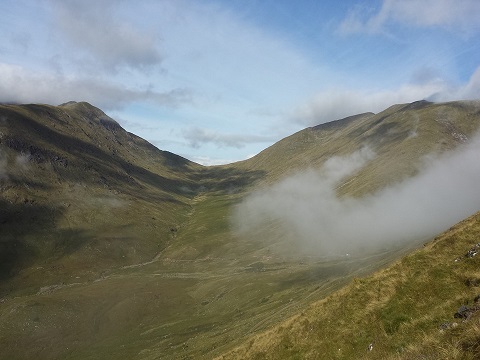 Lairig Noe - the bealach we would stop at later Back to the resevoir 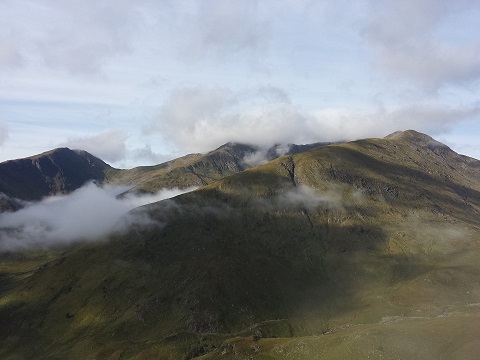 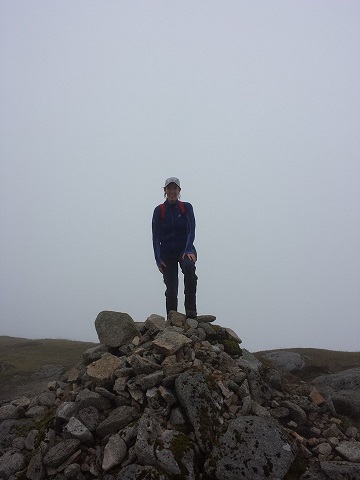 Down to the bealach at Lairig Noe. This was pretty steep and pathless and quite hard on the ankles! I was really happy to see a few big rocks at the bottom where we stopped for a bit of lunch. As I had a train booked from Dundee and we knew it was a big walk, we didn’t dilly dally. The next bit looked a bit daunting though, steep, pathless, slippery grass and rocks and a big 350 / 400 meters of ascent. We had watched a couple ahead of us make slow progress up this bit…So off we went. Chatting away at the start but before very long my heart was about to burst out of my chest!! I haven’t been so out of puff in a long time!! It was really steep and quite slippery with the constant drizzle and all I could think about was just getting up to the ridge – even if it meant a few bits on my hands and knees to feel a bit more secure! The only other thought I had was ‘thank God I’m not doing this in winter’, it would be a bit steep for me in snow. 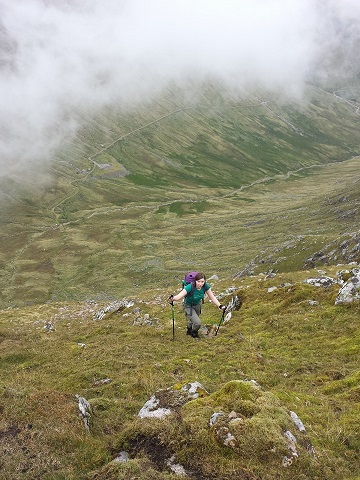 The steep climb up from Lairig Noe to Stob Diabh. A lung-buster!!

As usual, as soon as we were at the top and had a wee bit water, all the hard work was soon forgotten and the focus was on summit 3 - Stob Diabh. There was a really good path along the ridge, but sadly for us, there were no views on this occasion. There were 4 chatty blokes from Edinburgh at the summit though and after a wee chat we headed for Cruachan…
Luckily for us, we had told the lads what we were planning to do. After about 10 minutes along a pretty straight path which had been described as ‘zig-zagged’, they turned to us and shouted “weren’t you two going to Ben Cruachan??”… er… yes! Oh well, back we went and managed to contour round and meet the path we should’ve been on and didn’t lose too much time. 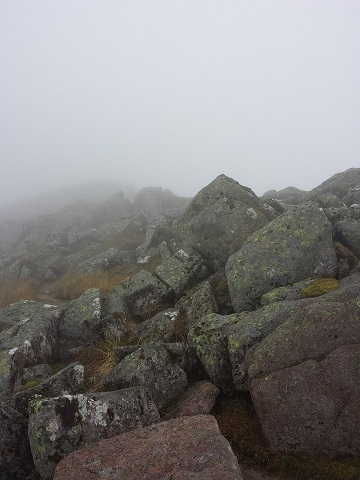 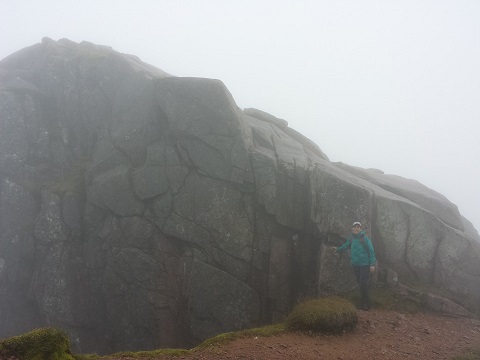 Back on track we headed along a pretty good path to our 4th and final summit of the day. The drizzle had now turned into rain – just in time for the ‘bad step’ which is not ideal in wet or icy conditions! This ridge would have been great on a fine day, and I can imagine quite a challenge in winter. The bad step (which we coped with fine with a bumslide or two) aside, there are a few narrow bits on this route with pretty huge drop offs that would be pretty challenging nav-wise in white outs.
Wet and with waning spirits, we reached the top of Ben Cruachan. No views and no stop, just a quick pic. Munro 30 for me - Ben Cruachan

Then we headed due south till we hit the little lochan then a left to follow the river along to the reservoir. There’s no real path and we eventually decided to cross to where it looked a bit more even. We then made good progress down to the reservoir, across the dam and down…
We had seen a couple who were as keen as us to get off the hill and back to the car. Unfortunately our car was a good 3km down the road. So we decided to take a different path down to the Falls of Cruachan station where we would hopefully bump into the couple who could maybe save us the walk back to the car. The walk down was really pretty and it was really brightening up (typical!) but we were both soaked and feeling the 2100m ascent / descent in our knees now. 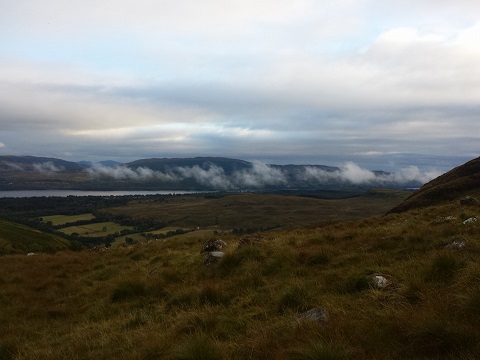 We got to the station but no sign of the couple yet. So we tried hitching. No joy. Then as we started walking, we spotted them coming out for the other bit of the station – yeah!! They could empathise and took no persuasion to give us a lift.

Back at the car just before 19:30. My 20:43 from Dundee was not going to happen! Just in the nick of time I realised there was a 21:11 from Perth and just made it. Had to tell 2 slightly embellished tales to the 2 conductors but they took pity on me and my sore knee (bumped it on a rock at Cruachan  ) and generally bedraggled state and didn’t make me buy a new ticket – thank you lovely Scot Rail . In Edinburgh at 23:00…the 5:34 feeling like a distant memory.

That all said, it was a brilliant day and my 30th munro of the year. Not bad for a lass who lives down South!

Good effort in mixed weather - still to do these hills, sounds quite tough in places.

I think doing the 2 separate days would be fine. The Steven Fallon route is what made it hard!

Good to see you made it on to Cruachan after we caught you trying to follow us - thankfully before too much descent! Still don't know how you both had the energy for that, we were knackered after the two!

Will have to go back for these two on a better day to see what we missed!

Haha - Glad you guys shouted when you did! Not sure how I did it after just 4 hours sleep! Was tempted to follow you all and hitch a lift to Edinburgh - especially when one of you mentioned the pub

Anyway - think you did the best 2 hills, the first 2 weren't as interesting...

What a long day

My legs are throbbing even reading that day out! Well done

I wasn't overly impressed with Eunaich and Chochuill, maybe because it wasn't a great day when I did them, but Cruachan across to Stob Diamh is a terrific walk. Shame you didn't get the weather and views from the lovely ridge.
You'll just have to come back and do them another time

Well done on writing a great report for this given we mostly just saw cloud all day! What a tough day that was! Its all just come back to me reading it