This 'little' walk has been on the backburner since the last WH meet, when we only managed Meall a' Chrasgaidh and even that was sheer torture when gale force winds forced us to retreat and save the Central Fannichs for another and better day.
That day arrived yesterday and after advertising my intention to make the long trek NW again, I had one taker (eddchambers). Unfortunately Ed had to pull out at the last minute, hope your partner is on the mend

So another solo challenge, the alarm went off at 3.55am and I was on the road before 4.30am and as you would expect there was hardly any traffic that early on a Sunday morning. It was just a matter of putting the cruise control on and then keeping myself occupied listening to some nice loud music on my iPod

For anyone intending to use the A9 beware, there are a couple of "new" obstacles, as if it wasn't bad enough with the money making camera's. There are road works near the Dalwhinnie junction, with traffic lights and then between Kingussie and Aviemore the work is about to start on the 'dualling' process, the cones are at the side of the road, no workers - but the speed limit is reduced to 40mph with the threat of Average Speed Camera's. Unfortunately we don't have any other option. There were a few fog patches around Perth and I managed to catch up and then follow an idiot with rear fog lights on just south of Dalwhinnie all the way up to Aviemore. I had full beam on until traffic approached southbound when I went into dip mode, then back onto full beam. I do despair at some motorists - rant over

Arrived at the parking spot and was on my way by 7.30am, had a quick chat with a couple who were intending to do the Central & Western hills - hope you managed it 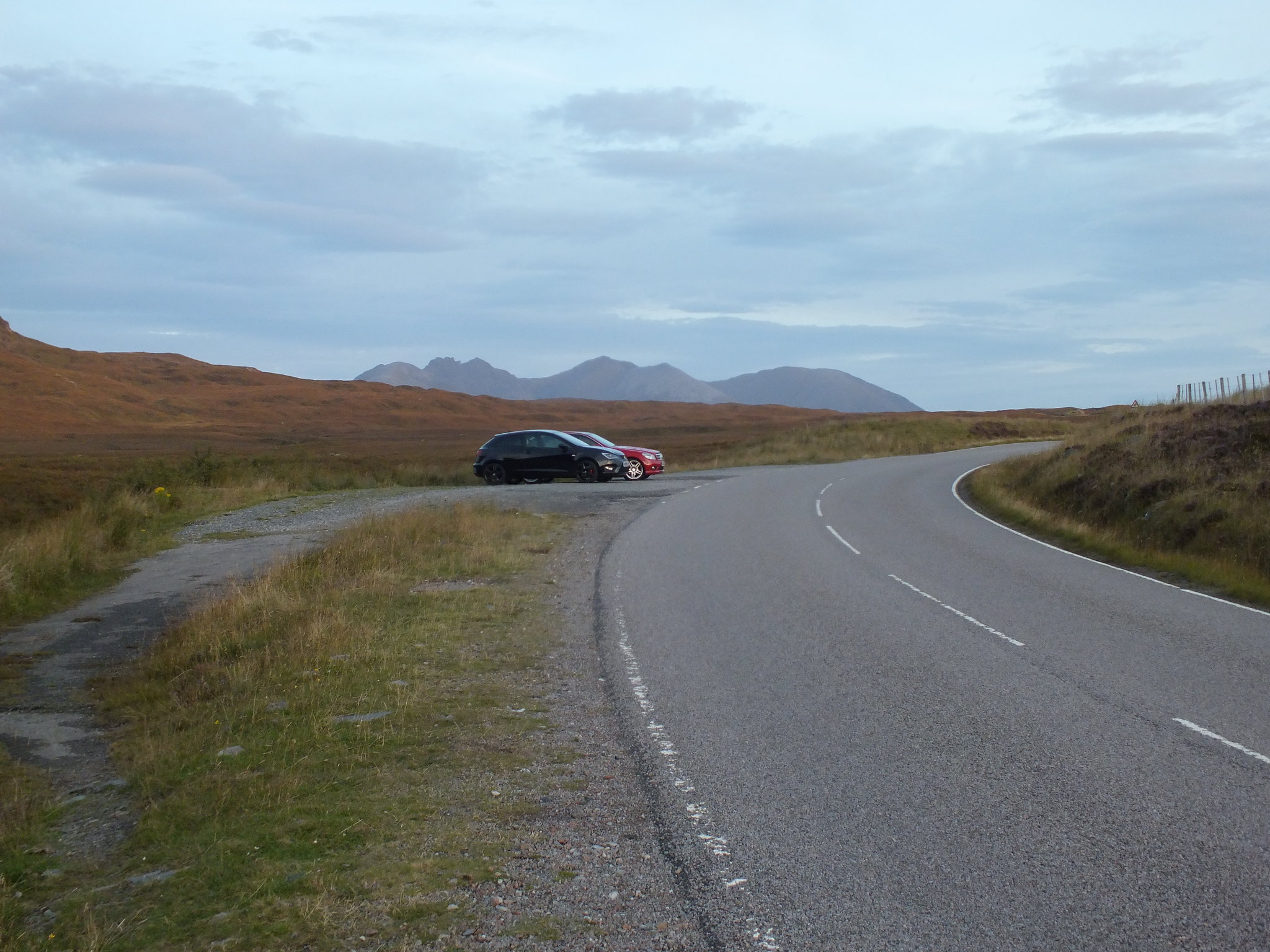 The walk starts off along a good track and I was planning to tackle all 3 this time, as I was familiar with the way up the first hill Meall a' Chrasgaidh I decided not to follow the route we took last time - proper bogfest. I decided to follow the path and stayed on the west side of the burn, unfortunately I missed the crossing point (marked with a cairn on the other bank). This meant I had to select a suitable crossing point as shown below, all went well until I placed my foot on the final two stones, both were anything but stable, end result both boots were under water. The good news is that my newish boots did there job and my feet stayed dry 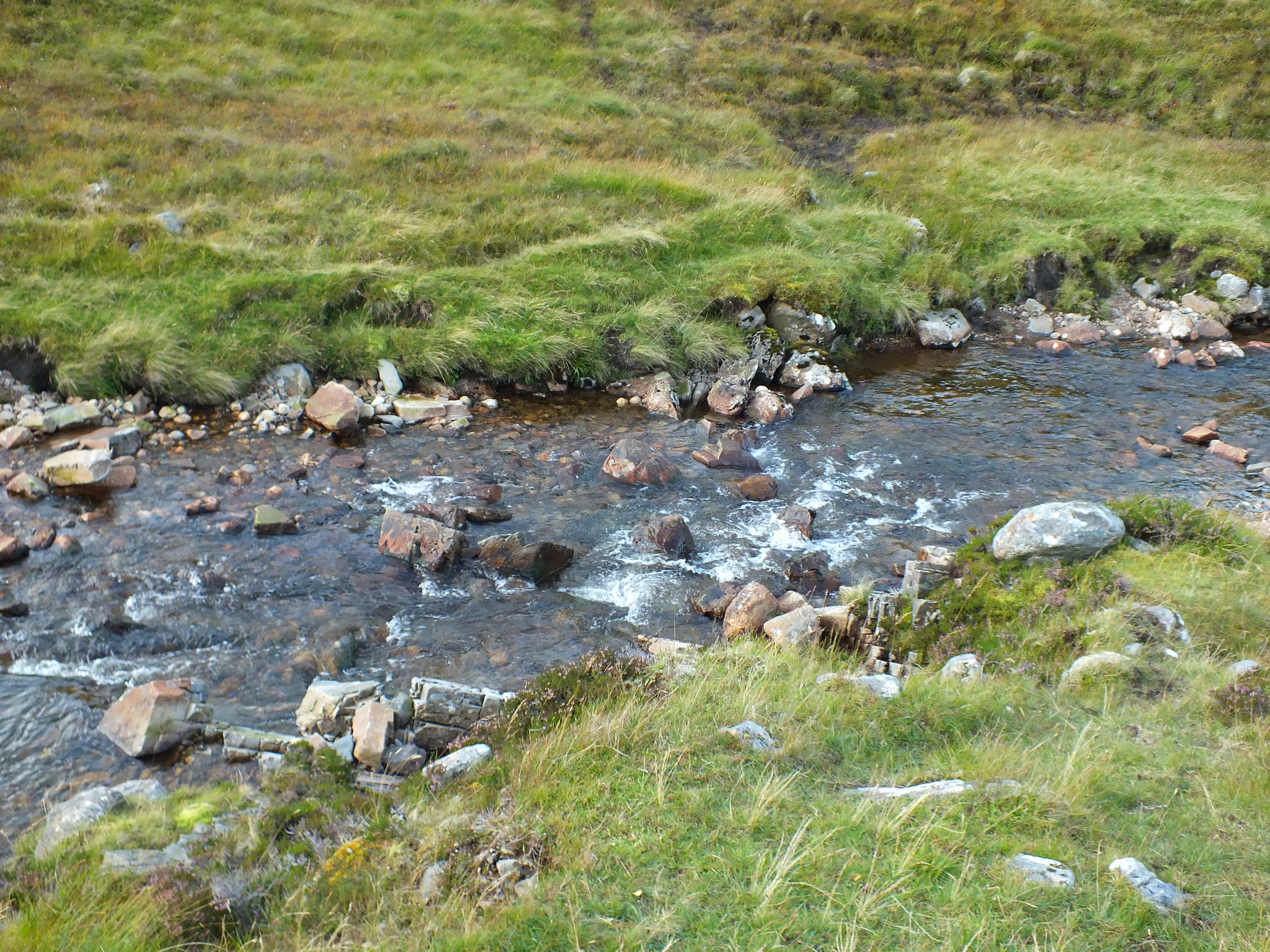 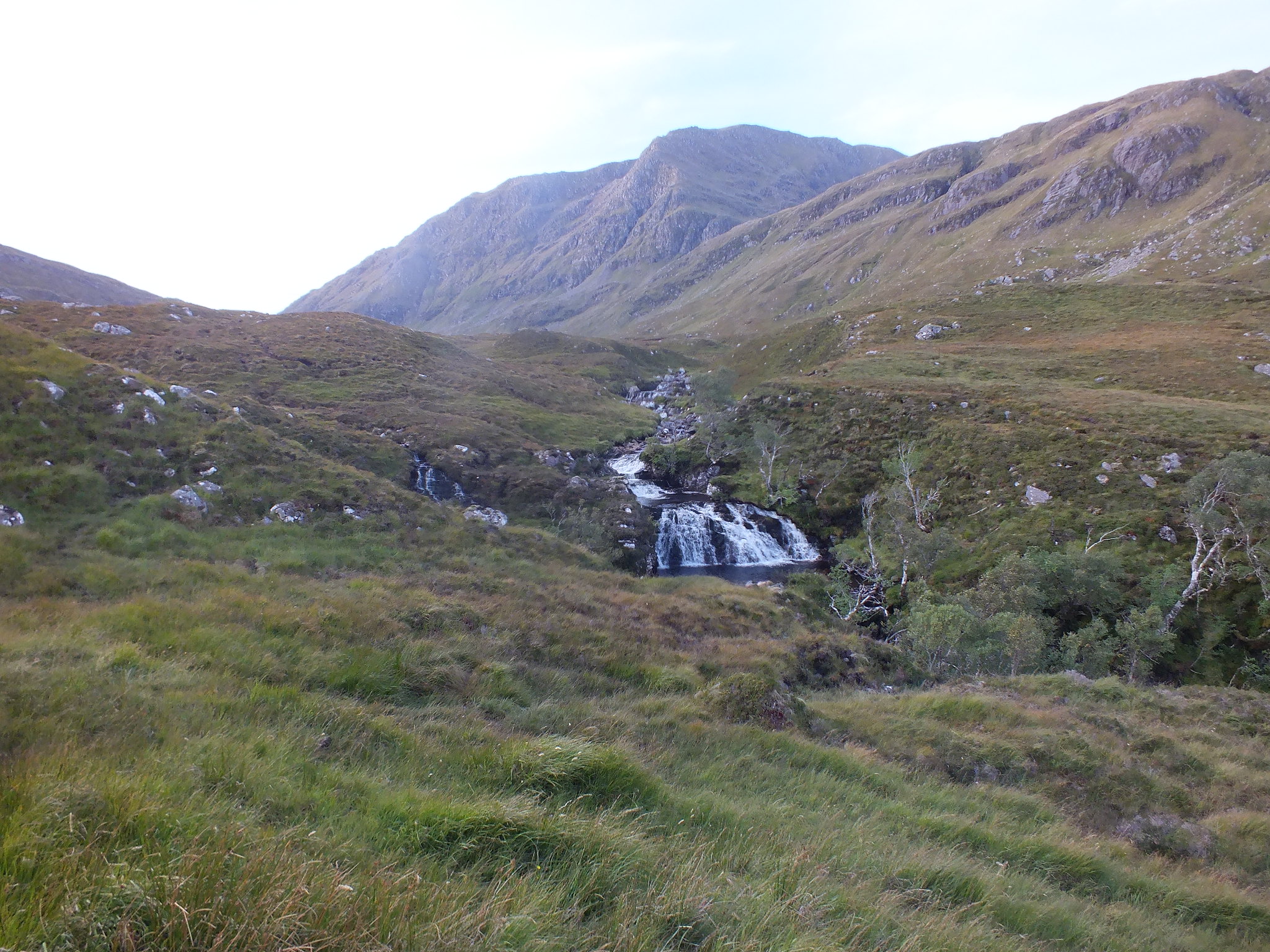 The trudge uphill seemed to be easier than the last time, mainly because the route I had picked was nowhere near as steep. My concern was the wind, which was started to pick up and as I neared the summit I really was beginning to think am I ever going to complete these three

I was grateful of the shelter on the summit and had I not driven for 3 hours I would probably have headed back down. 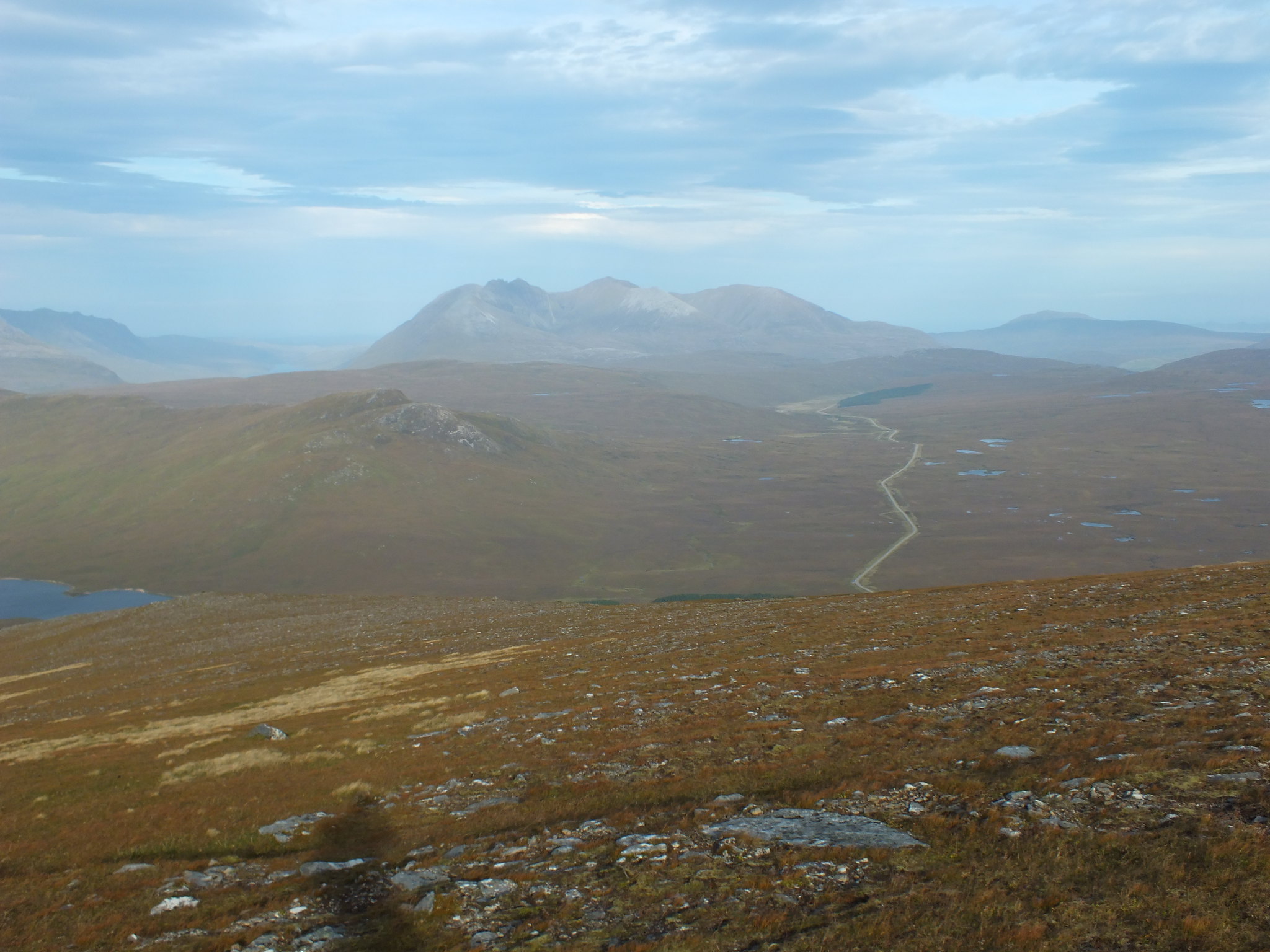 An Teallach in the distance from the first summit 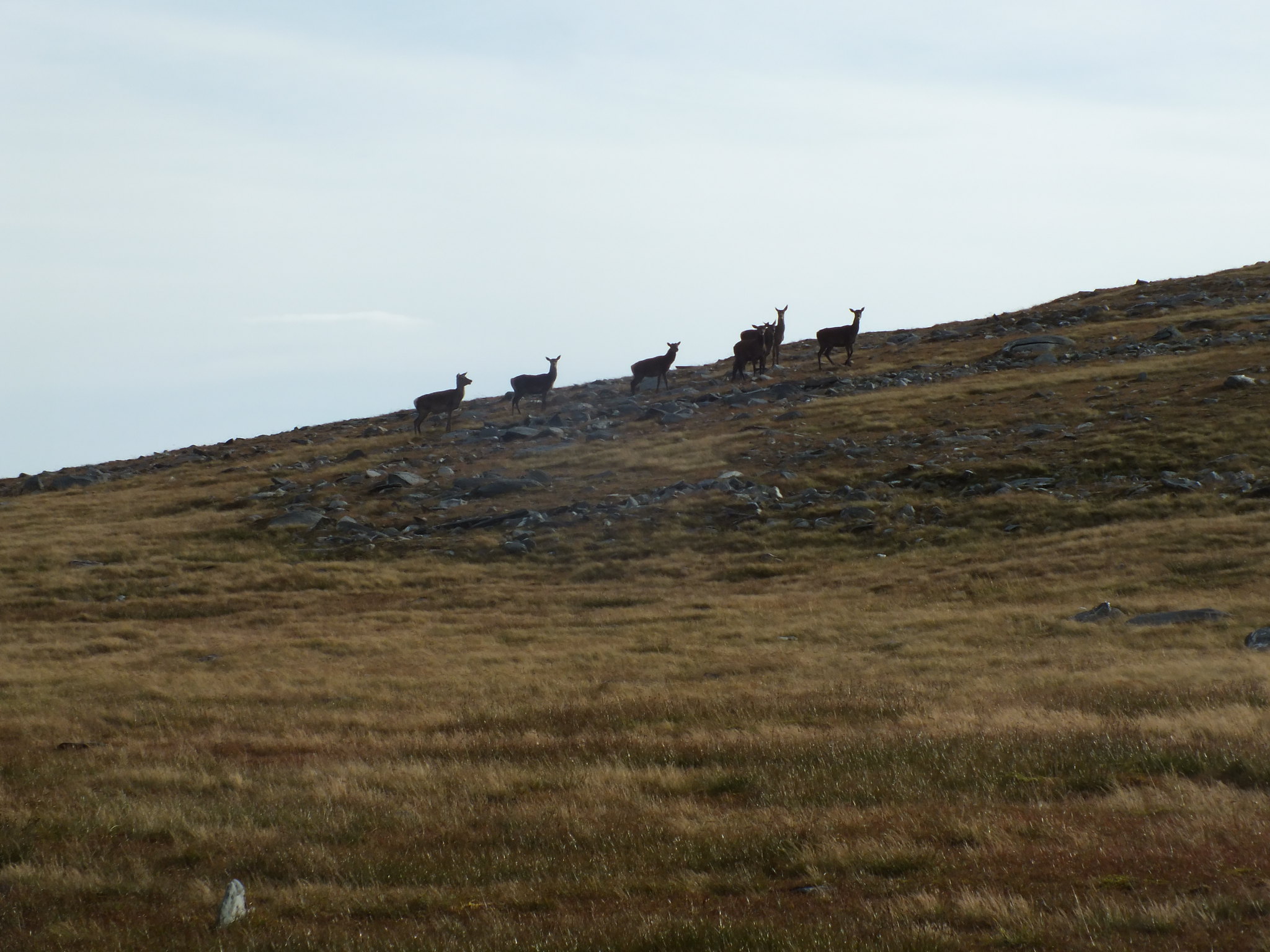 The locals spotted me 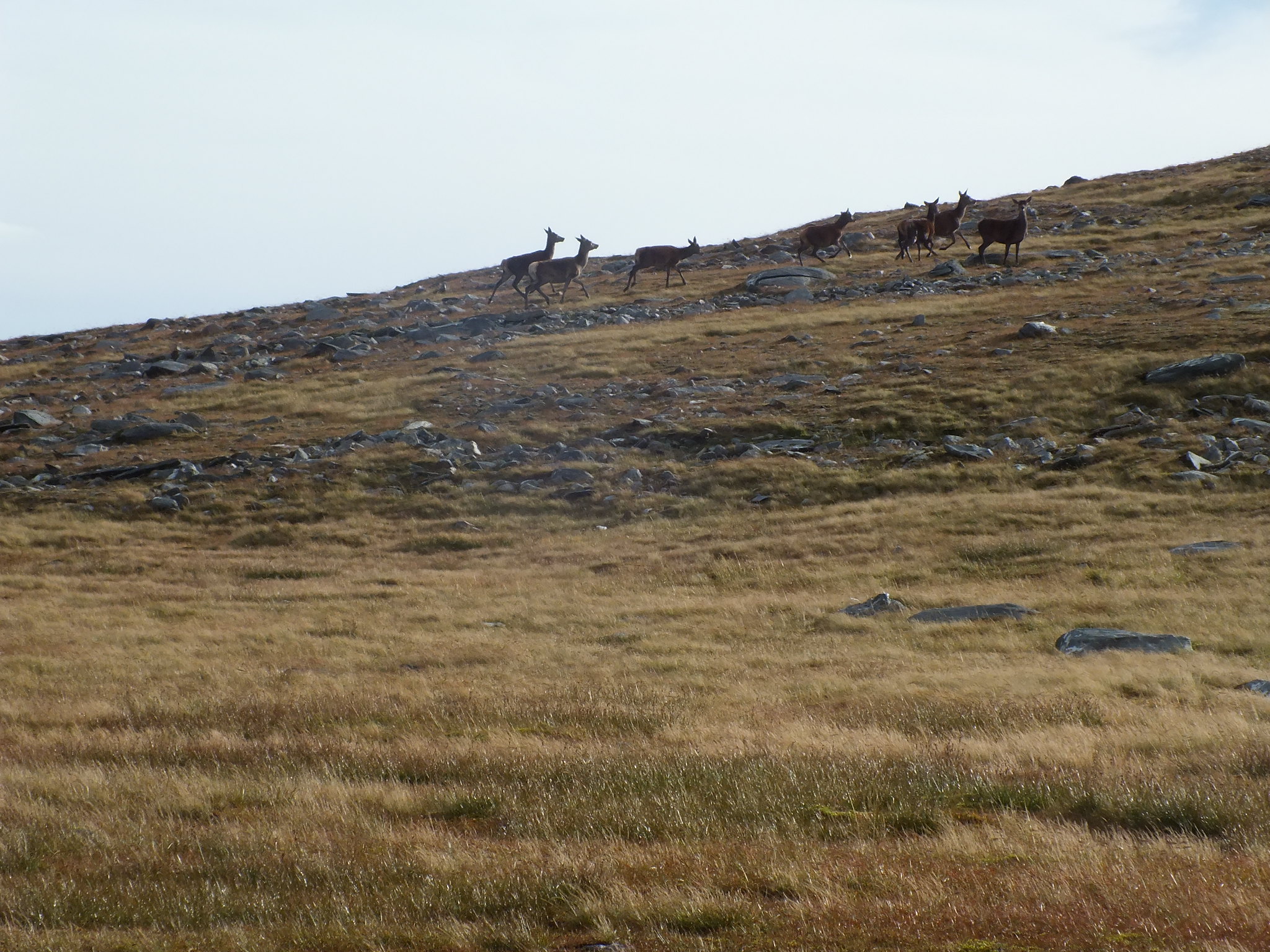 Time to move on

After a brunch bar I set off trying to pick up a path down, I could see a faint one going up the other side so I headed in that direction. Once down in the dip of the bealach the wind eased off quite a bit and I was able to take a layer off. I knew the approach to the next summit would be the most interesting and once I reached the ridge Eagan Tuill Bhig the views especially to the south were stunning. There is a good path across the ridge that weaves in and out of the rocky bits. When you first see the ridge you immediately think how are we going to negotiate that? 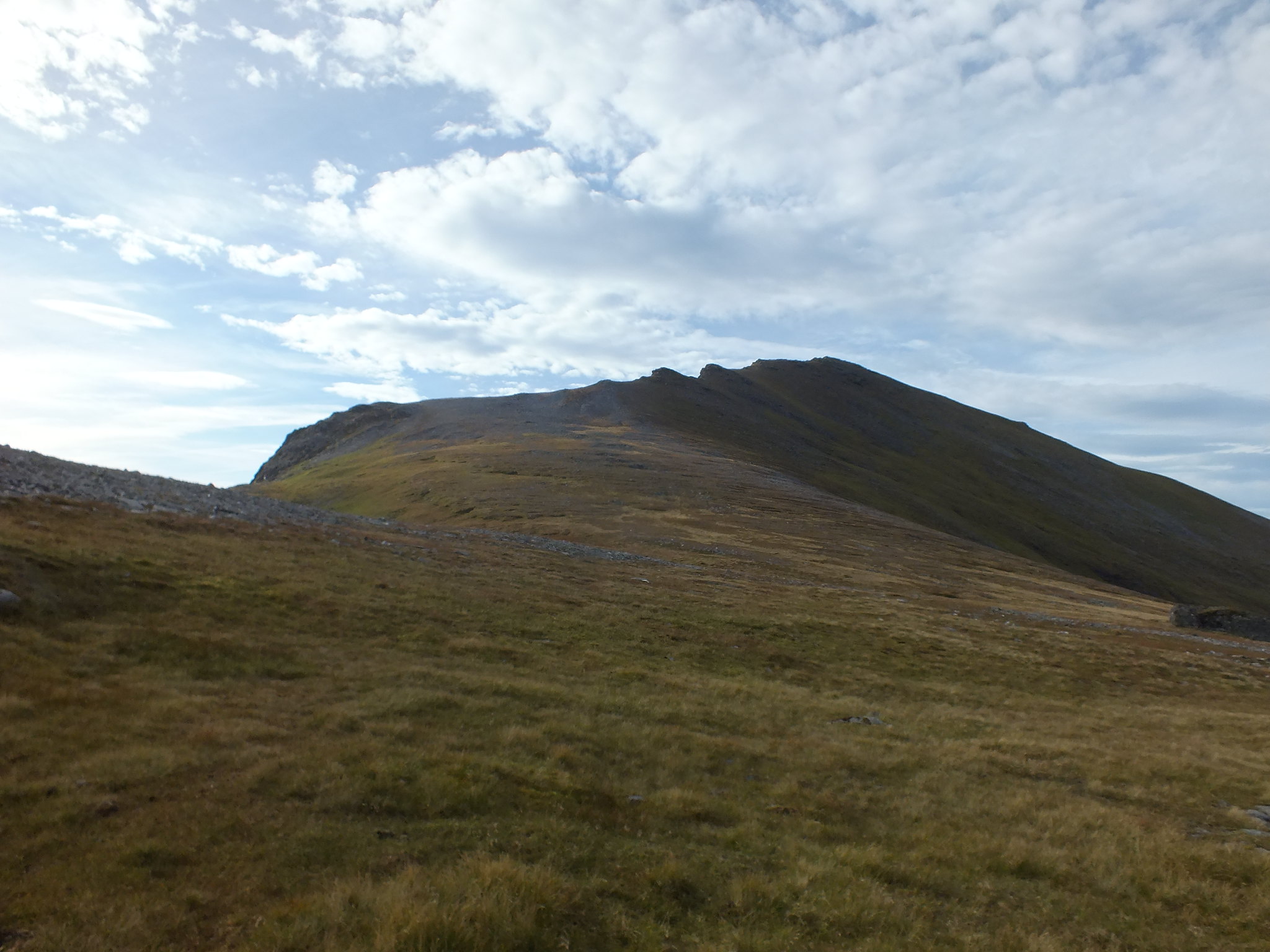 Looking up from the bealach 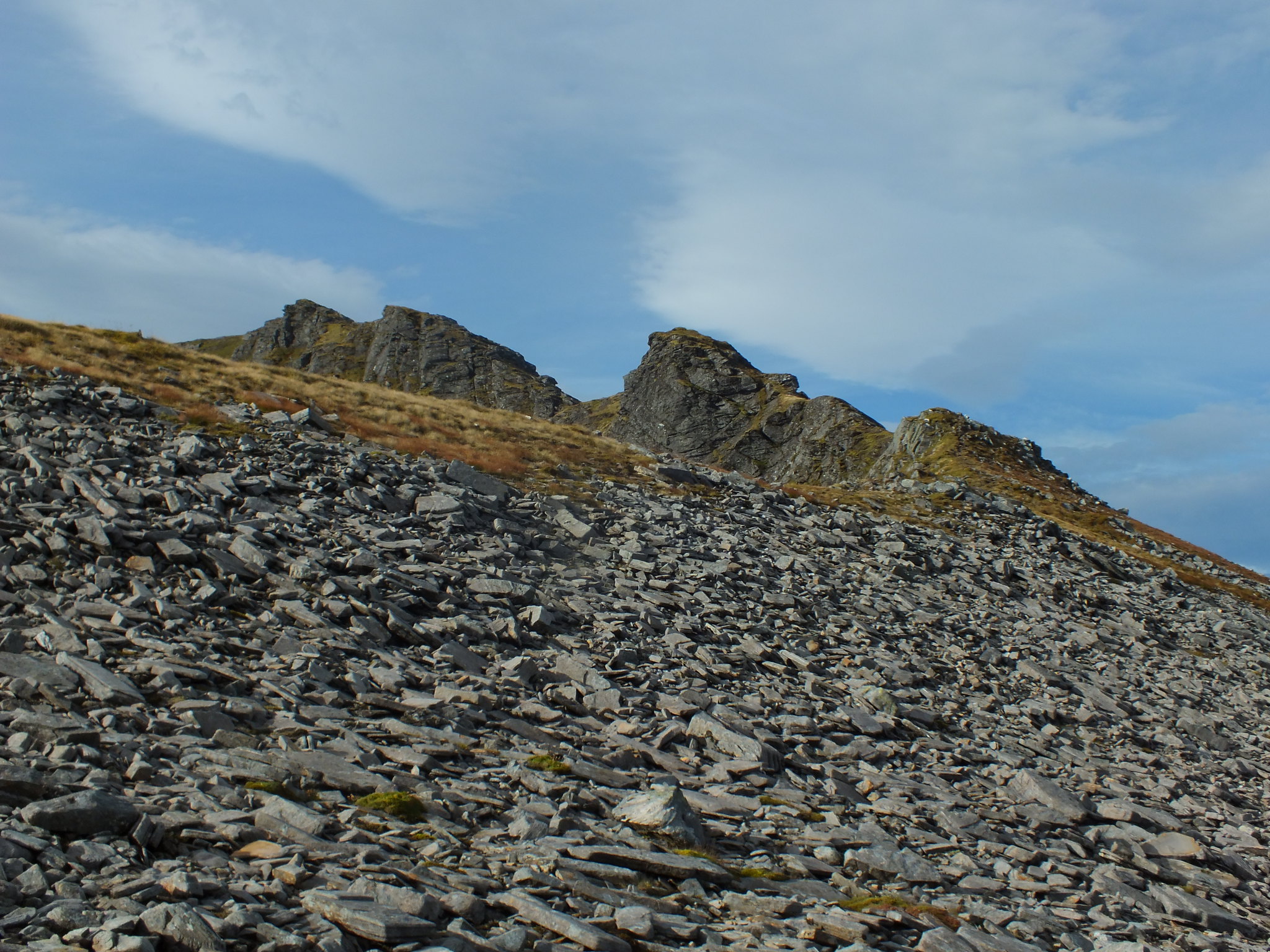 First glimpse of what lies ahead 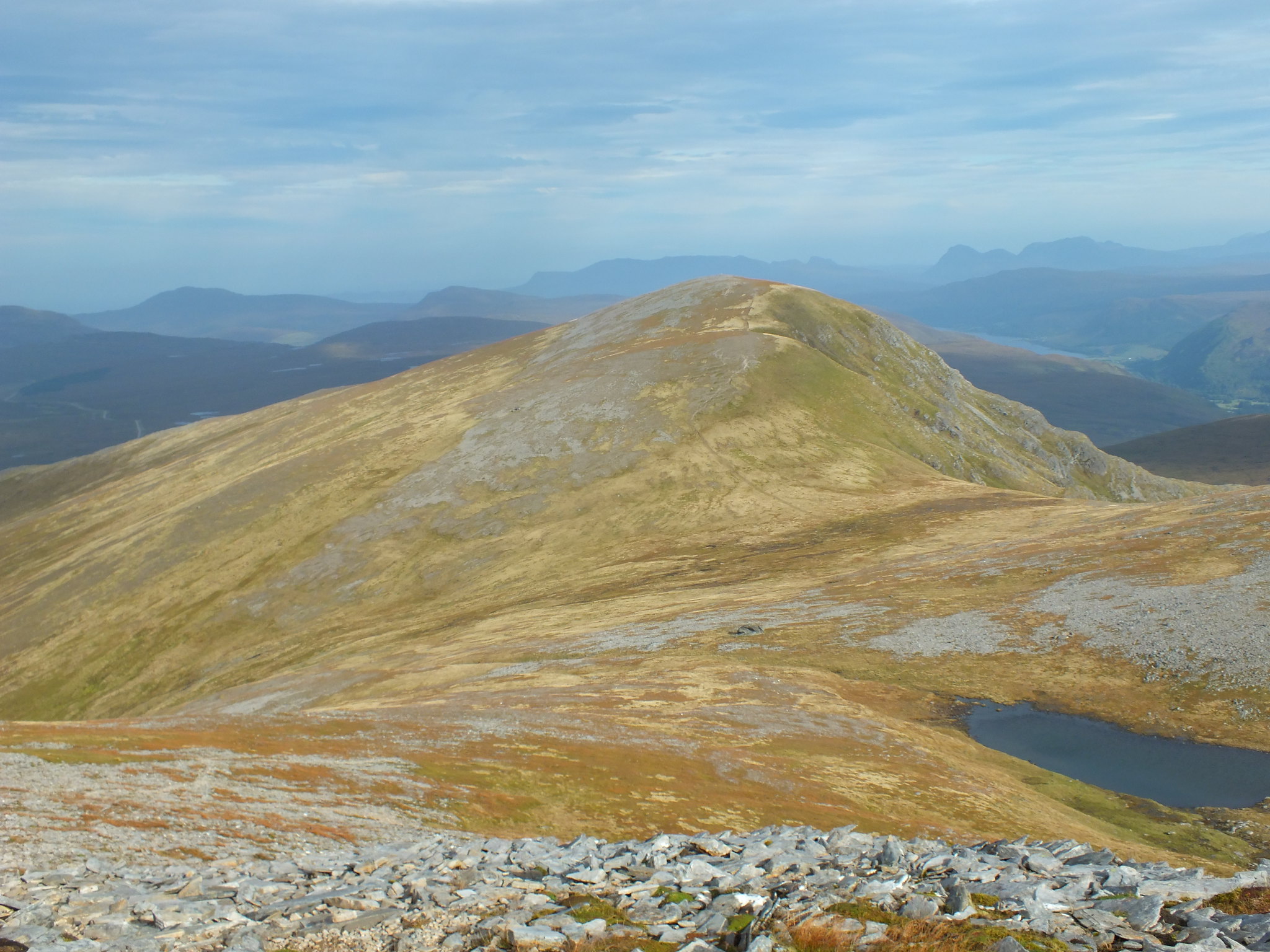 Looking back to the rounded summit of Meall a' Chrasgaidh

Once you reach the ridge there is a really well defined path that even I couldn't lose, no need to put the poles away as there is no scrambling. The view to the south down Coire Mor' was superb and along way down 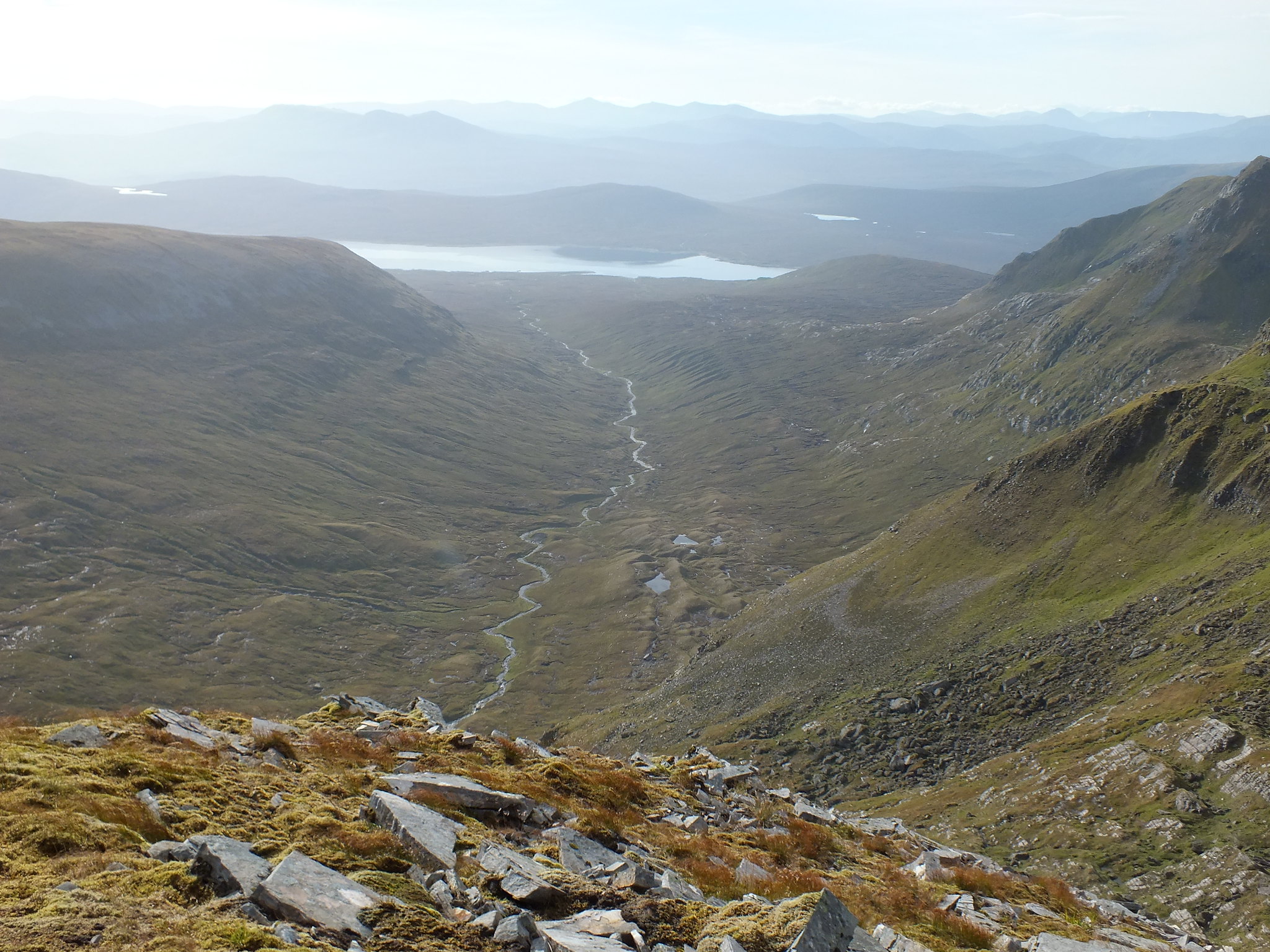 The view to the south 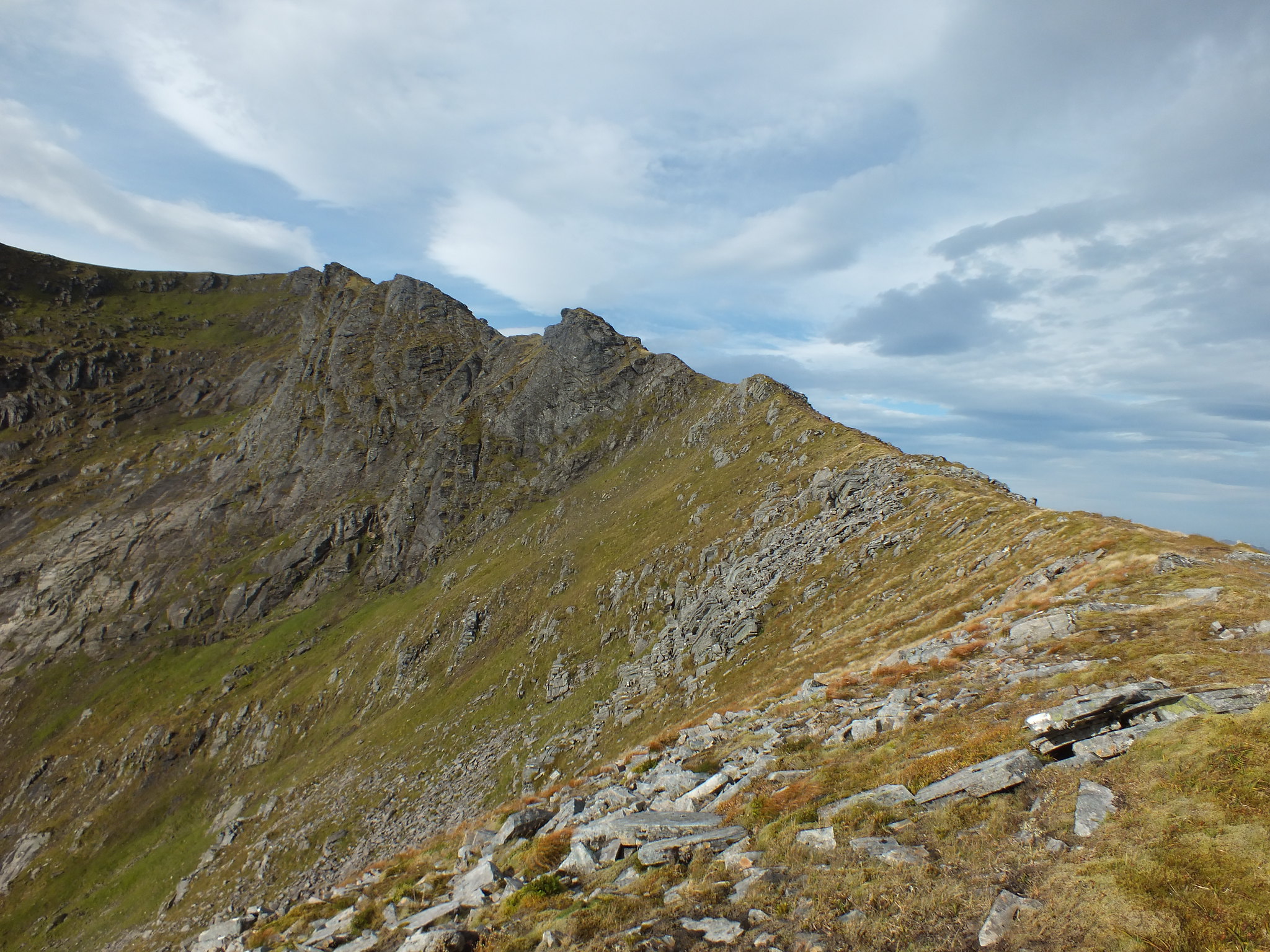 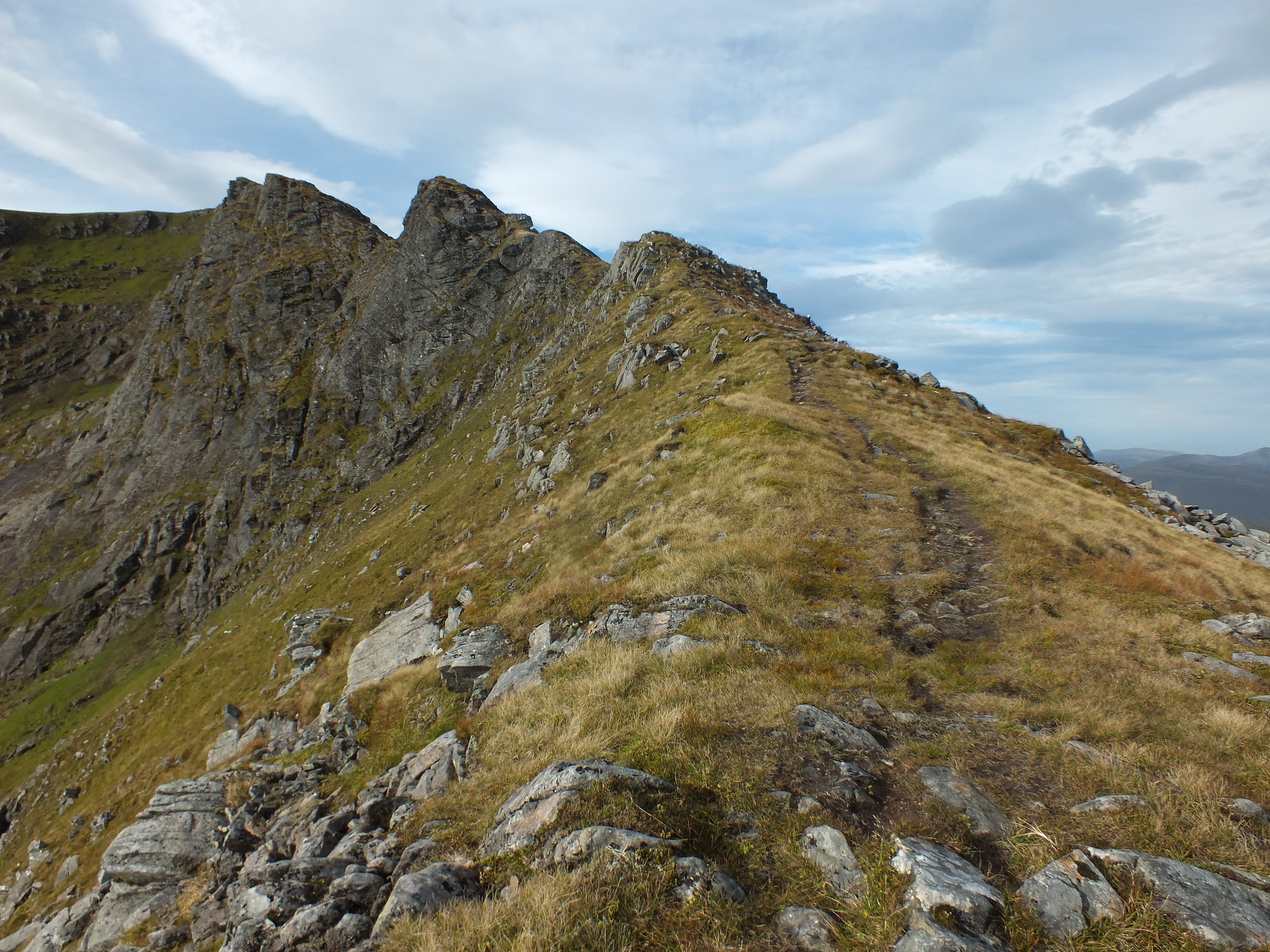 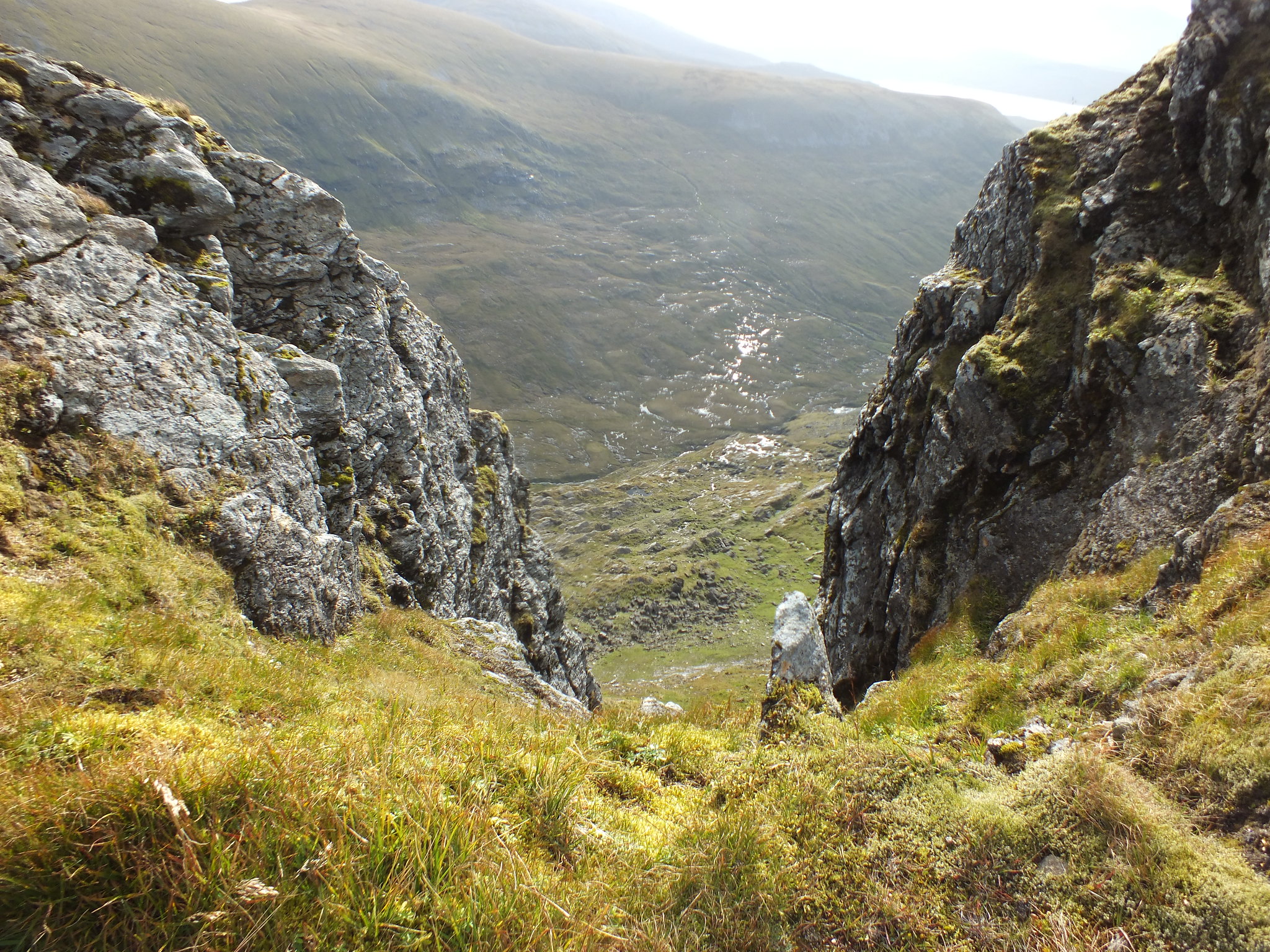 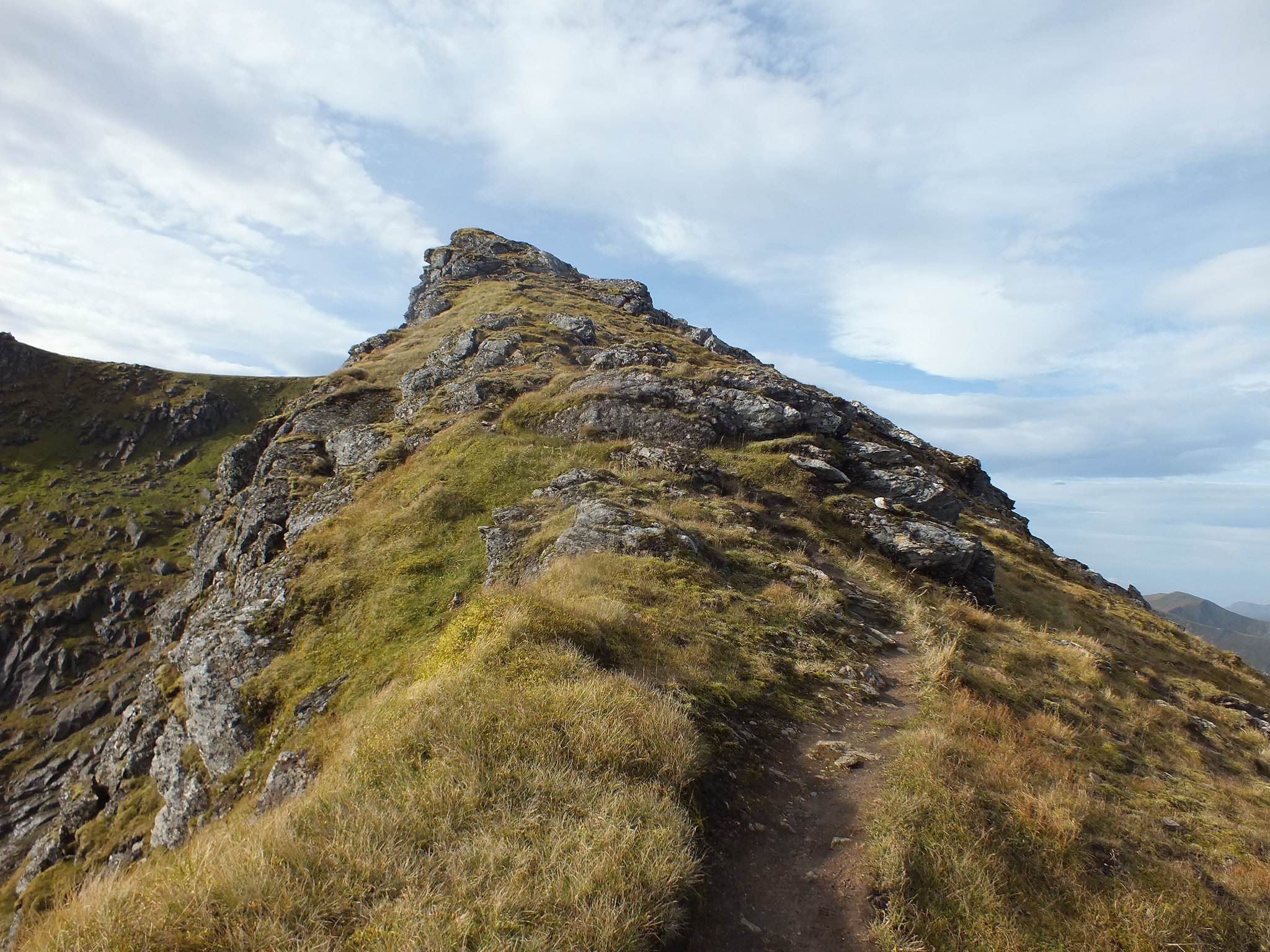 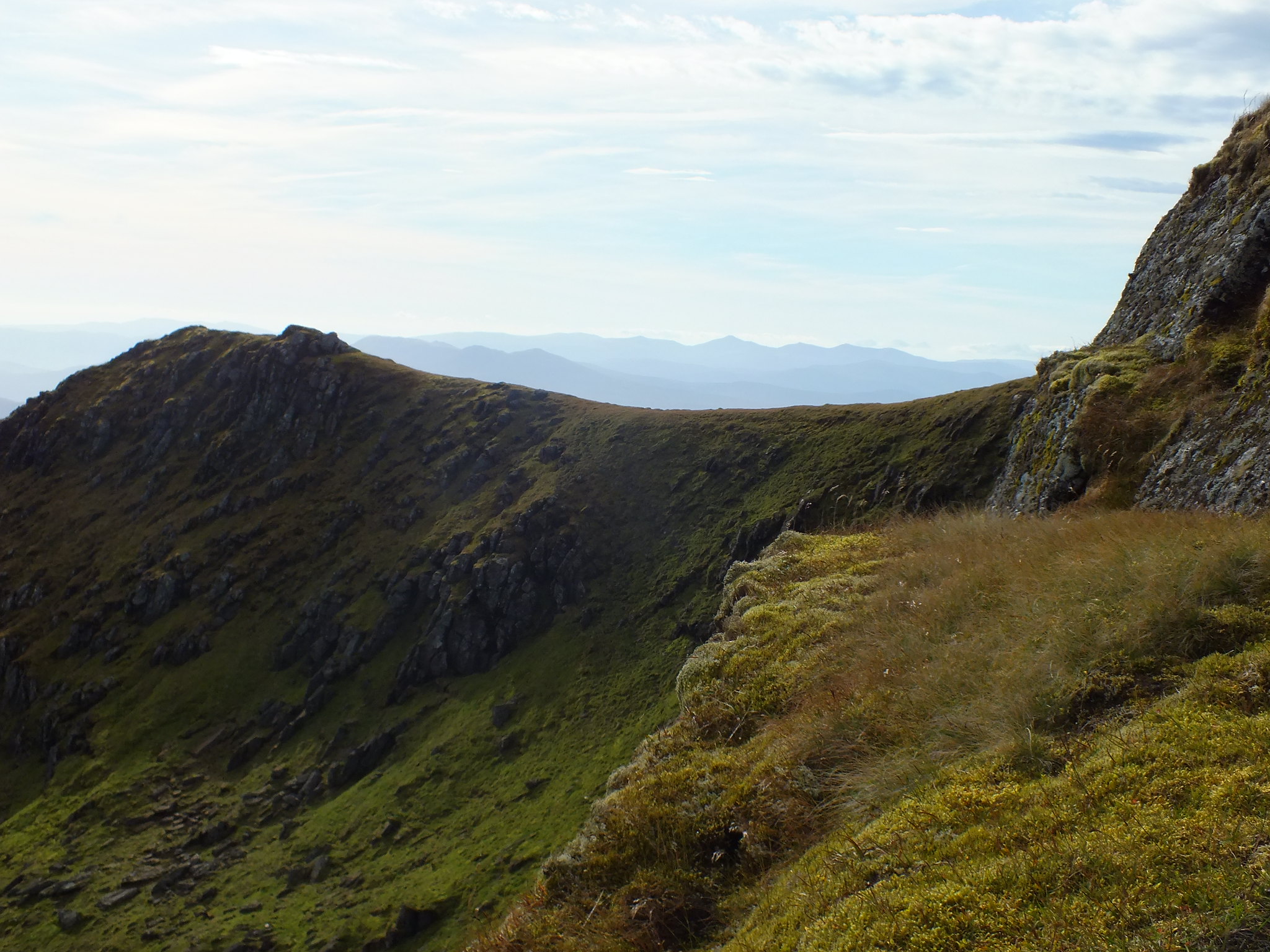 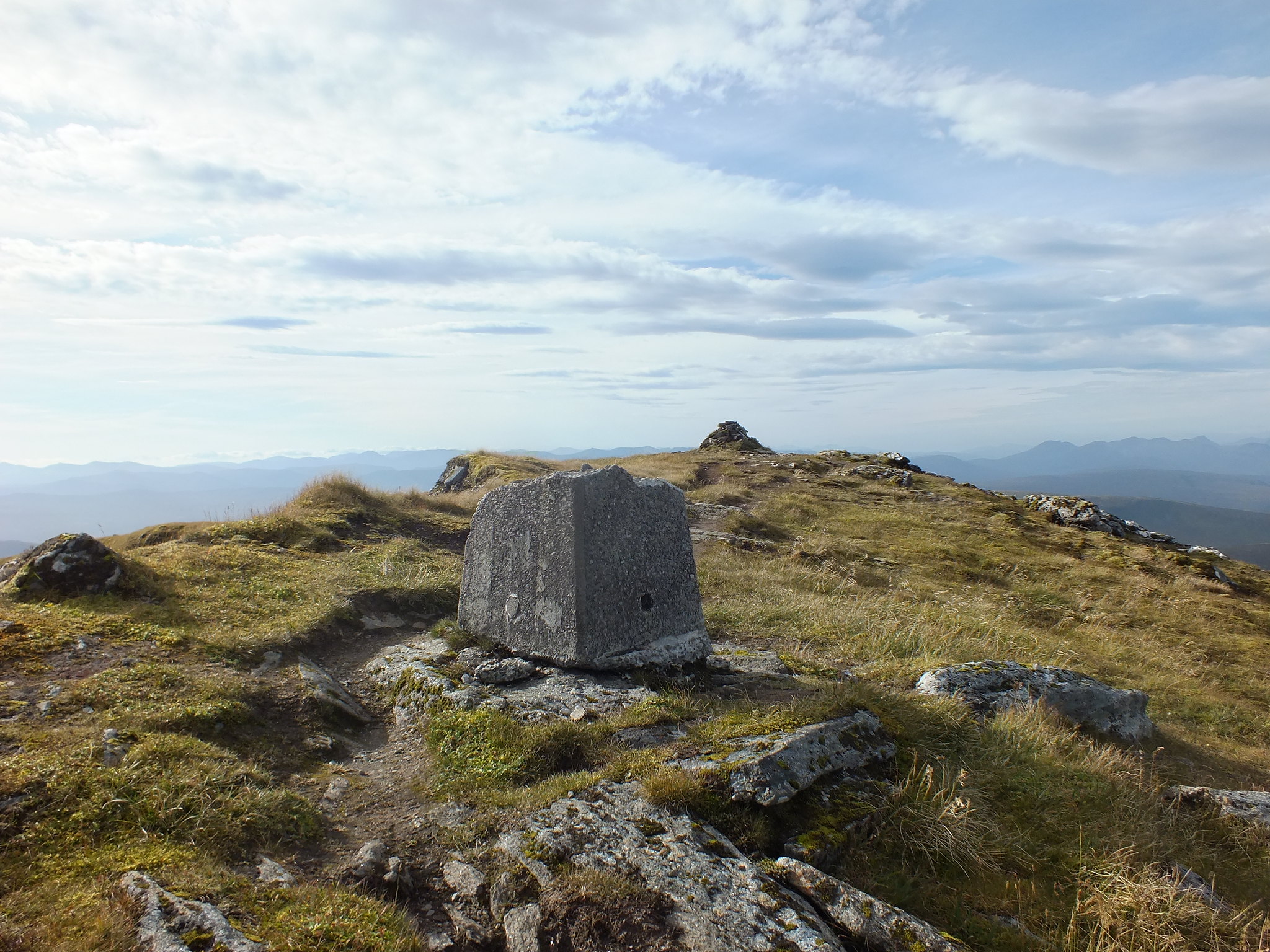 The summit of Sgurr nan Clach Geala, note the distance between the cairn and the trig

Once on the summit of Sgurr nan Clach Geala this is the highest point of the day, on the summit there is half a trig and about 15 yards away a small cairn. To amuse myself I decided to try and take a few selfies by using the 10 second timer on my camera

The camera was carefully placed on the cairn, then I had to turn into Usian Bolt and get myself across to the trig to pose 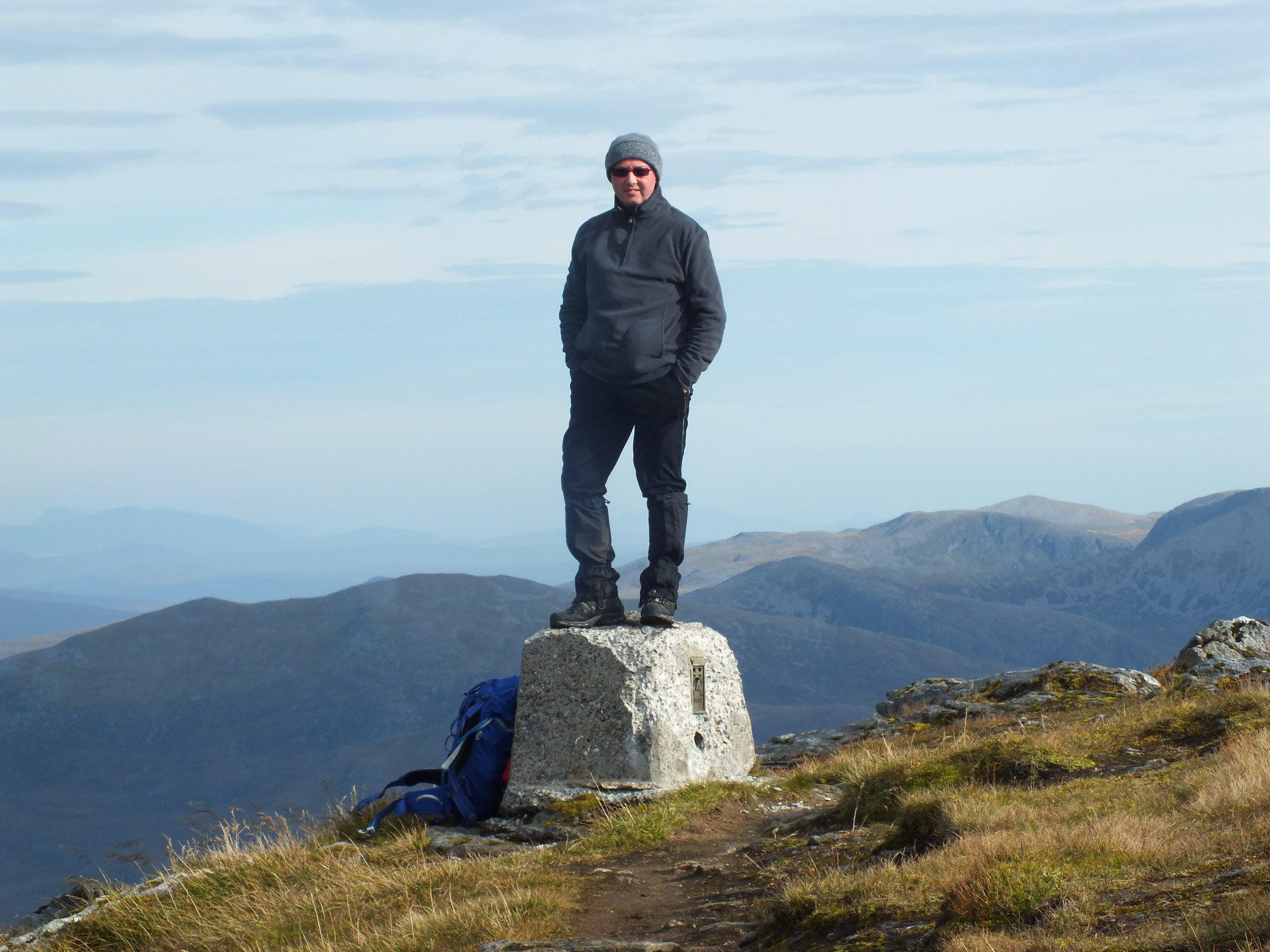 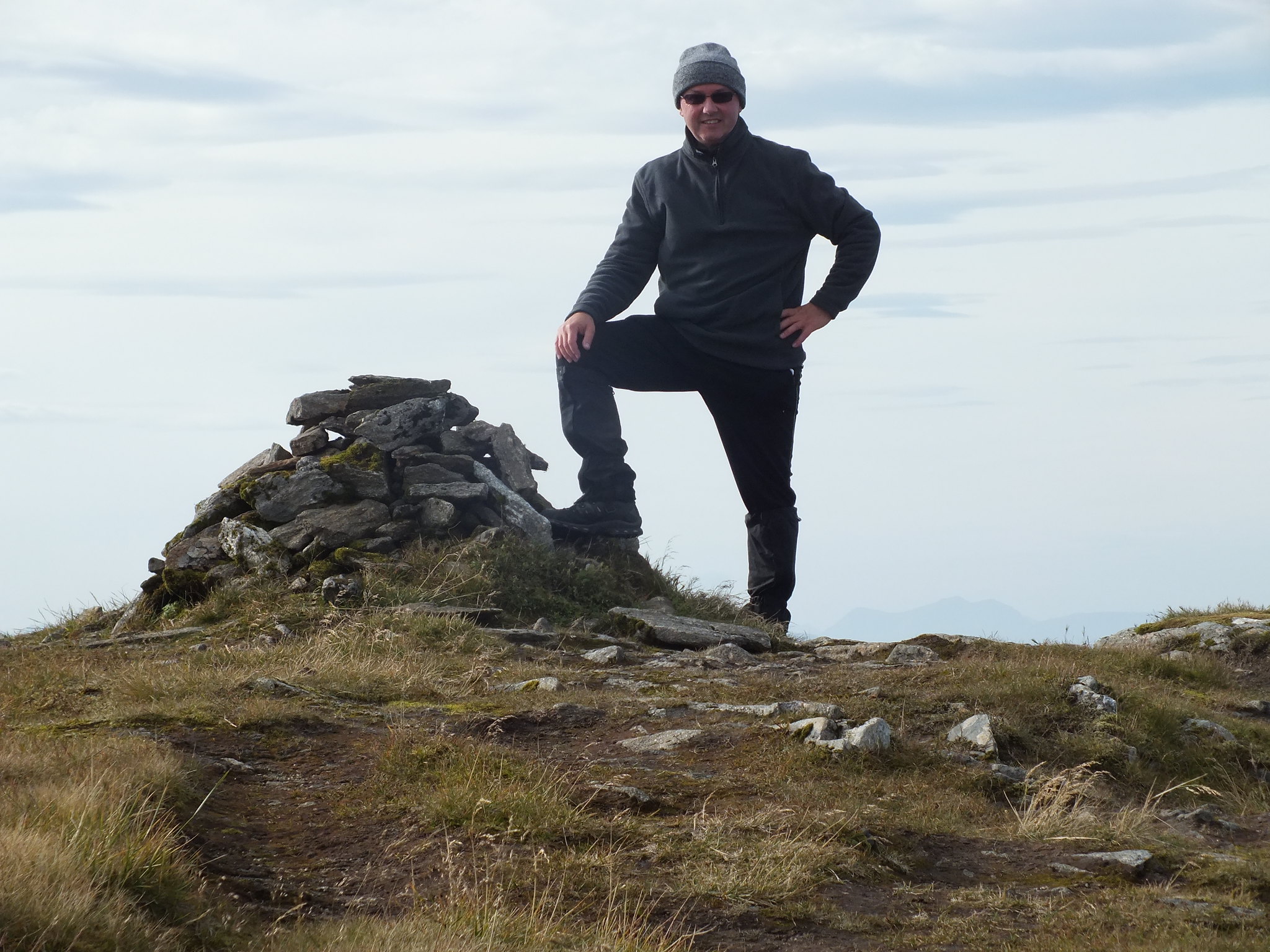 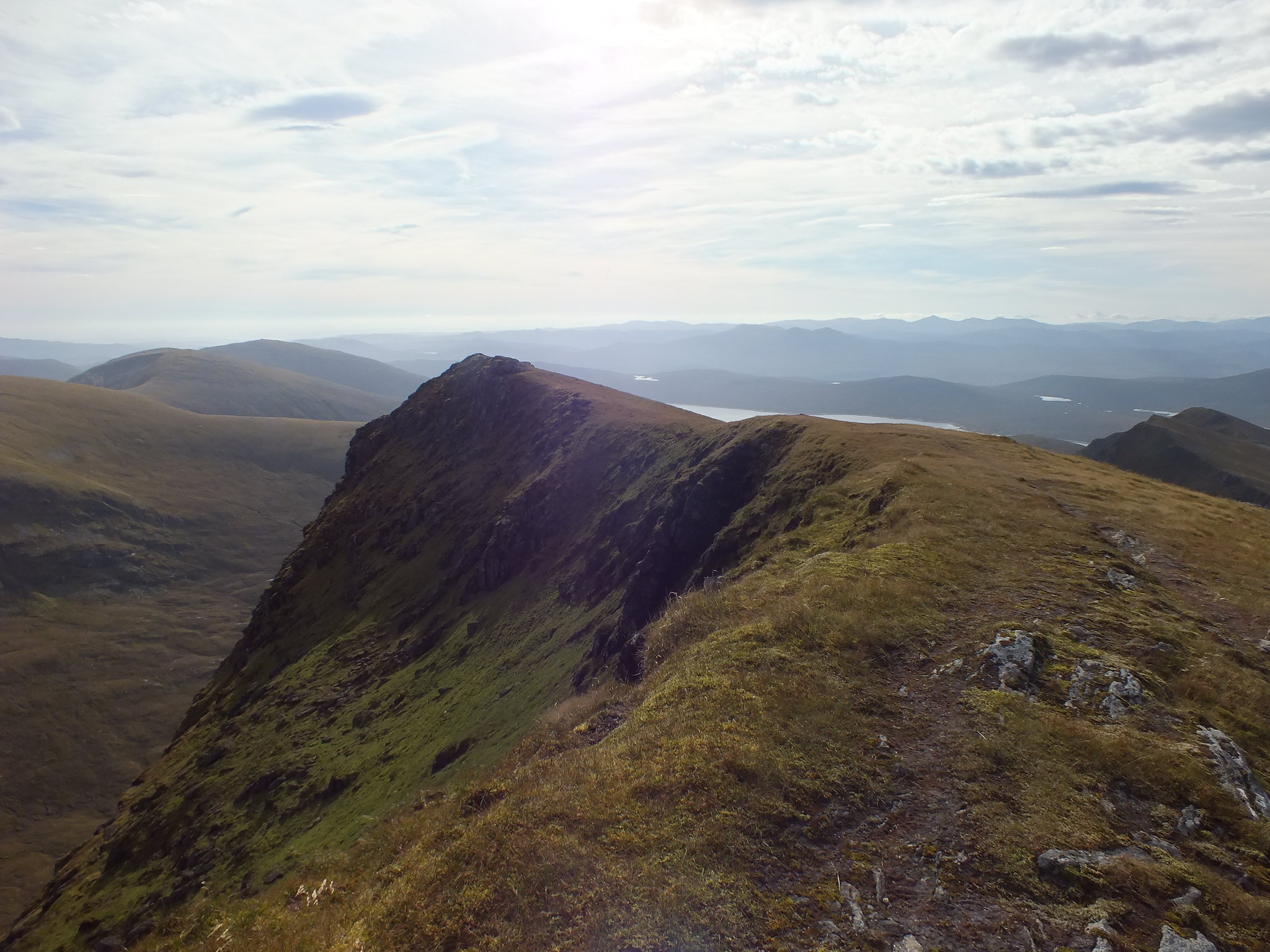 The next port of call 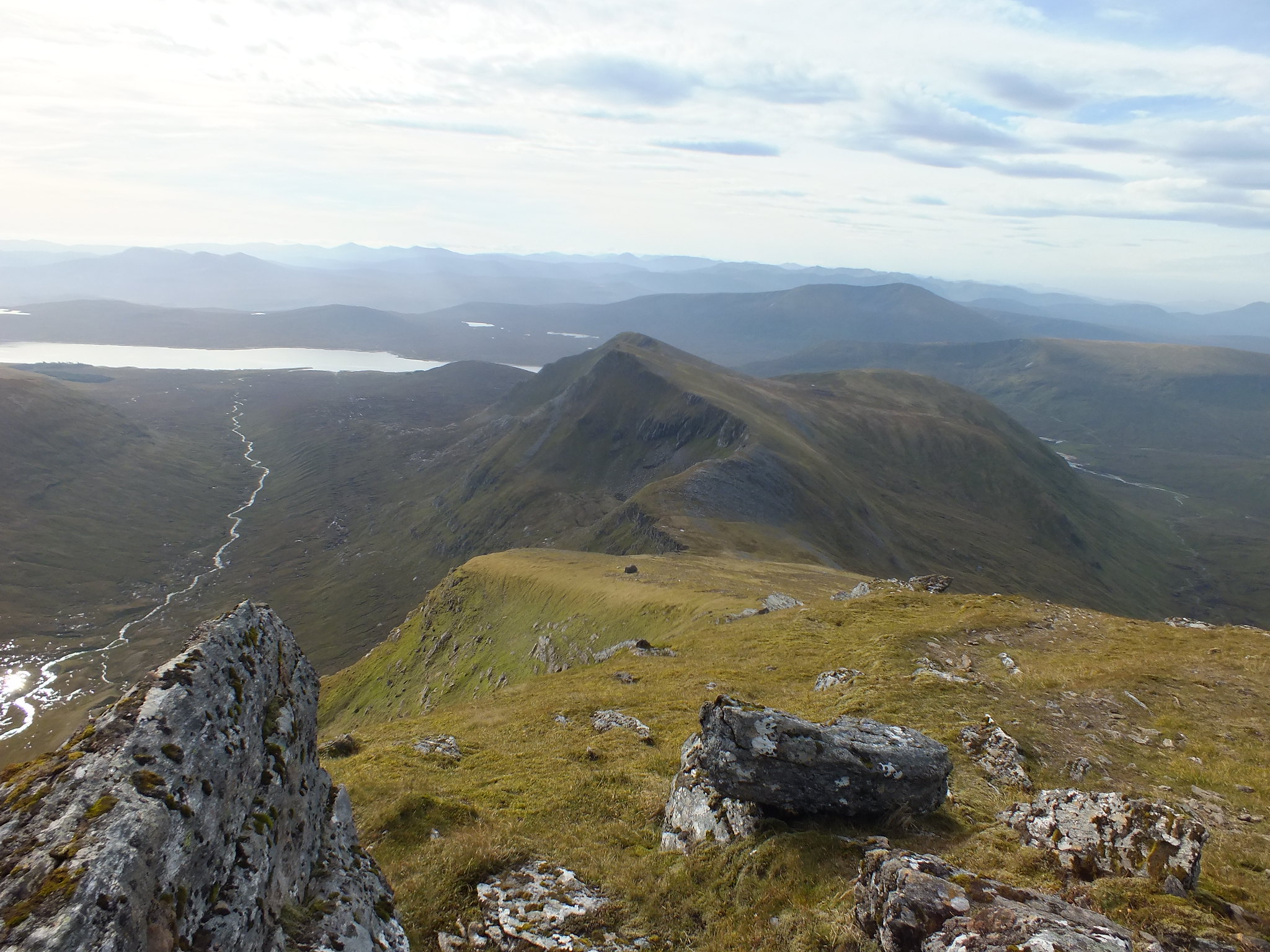 The final summit in the distance, looked kind of wee 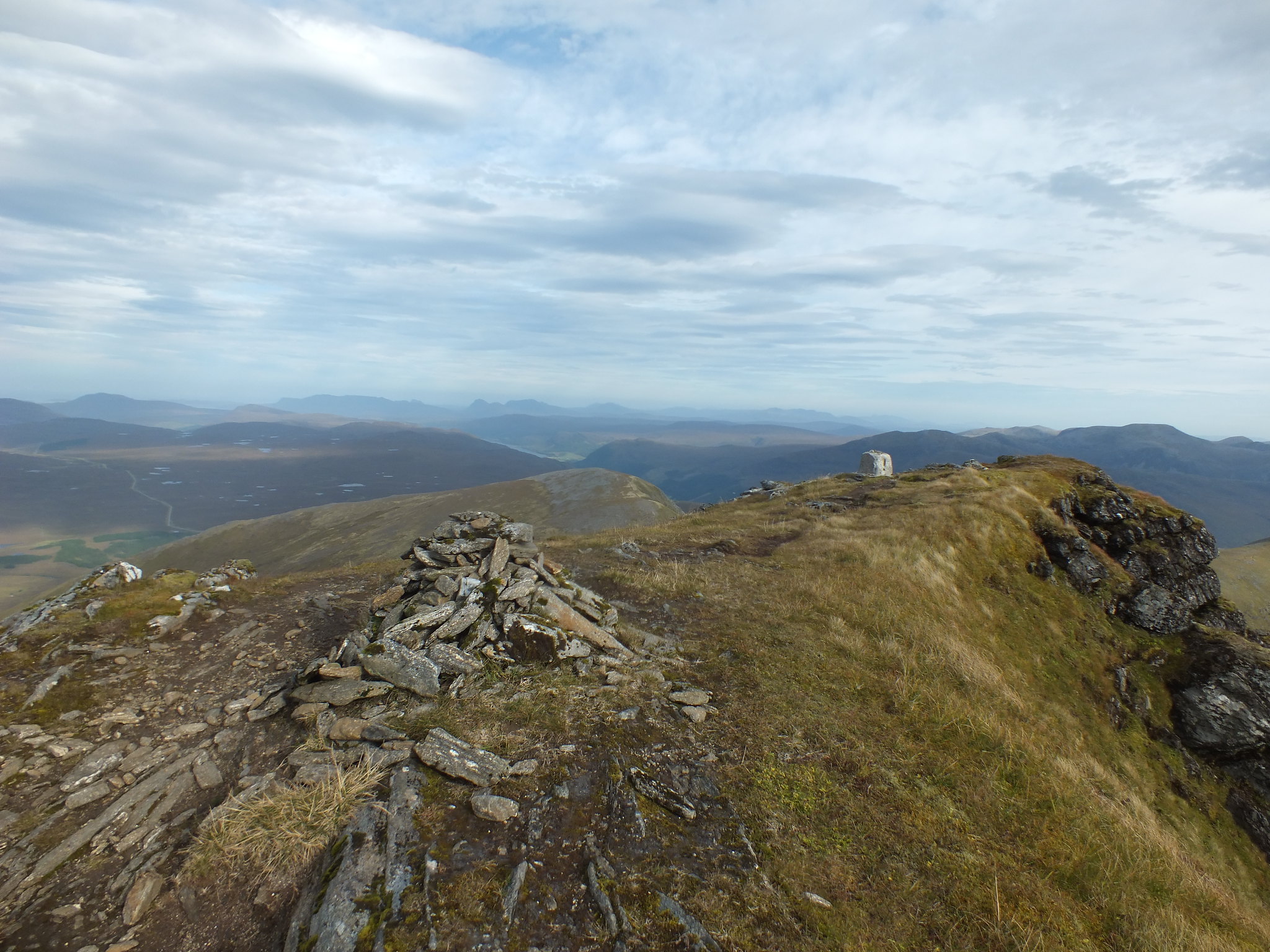 The descent off Sgurr nan Clach Geala was straight forward and just a matter of following the path zig zagging down to the bealach. There is a cairn at the bottom of the descent indicating the route down, once the final summit had been tackled. I decided to leave my rucksack near the cairn as the summit of Sgurr nan Each didn't look too far away and it only took 10 minutes 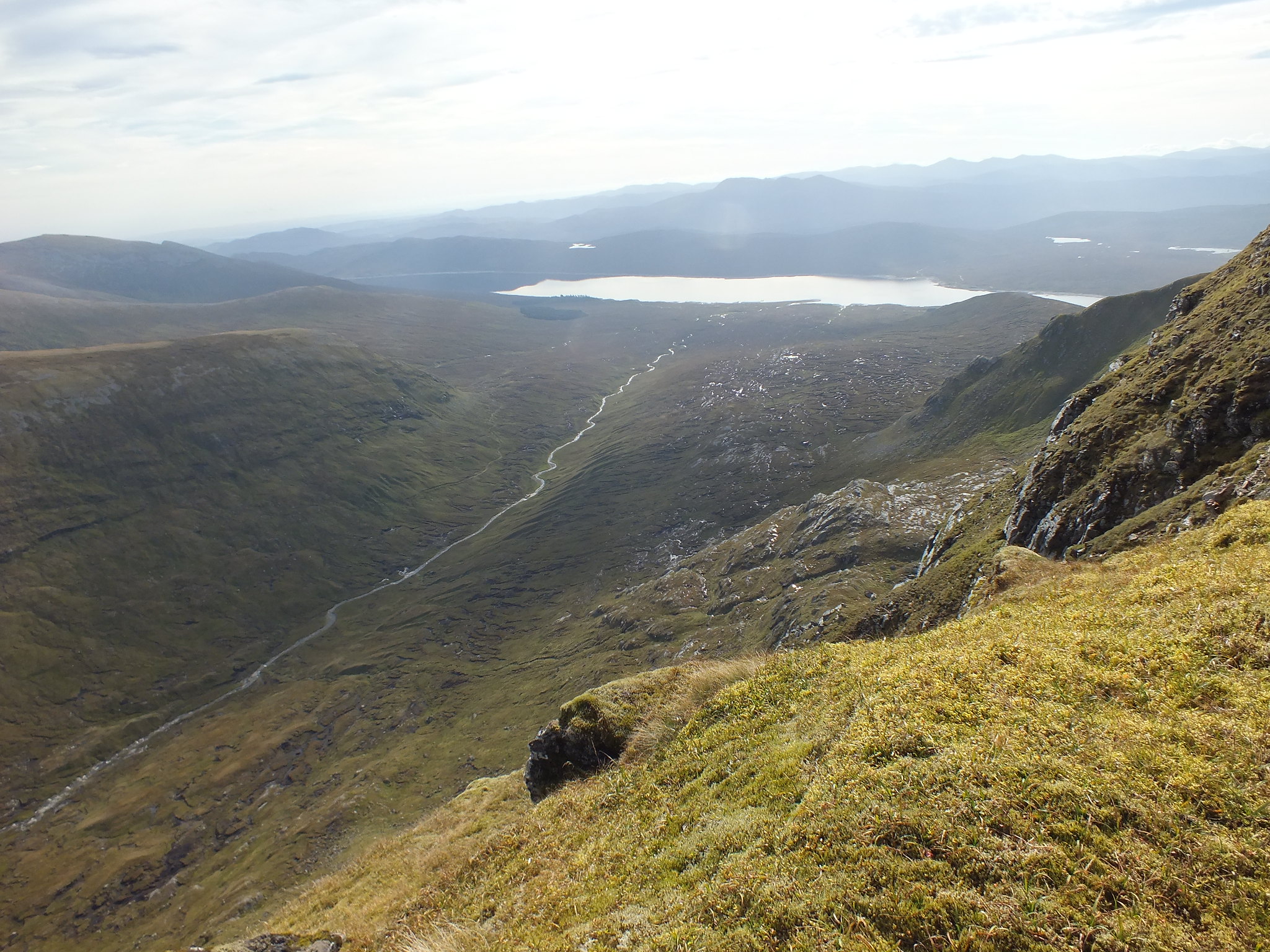 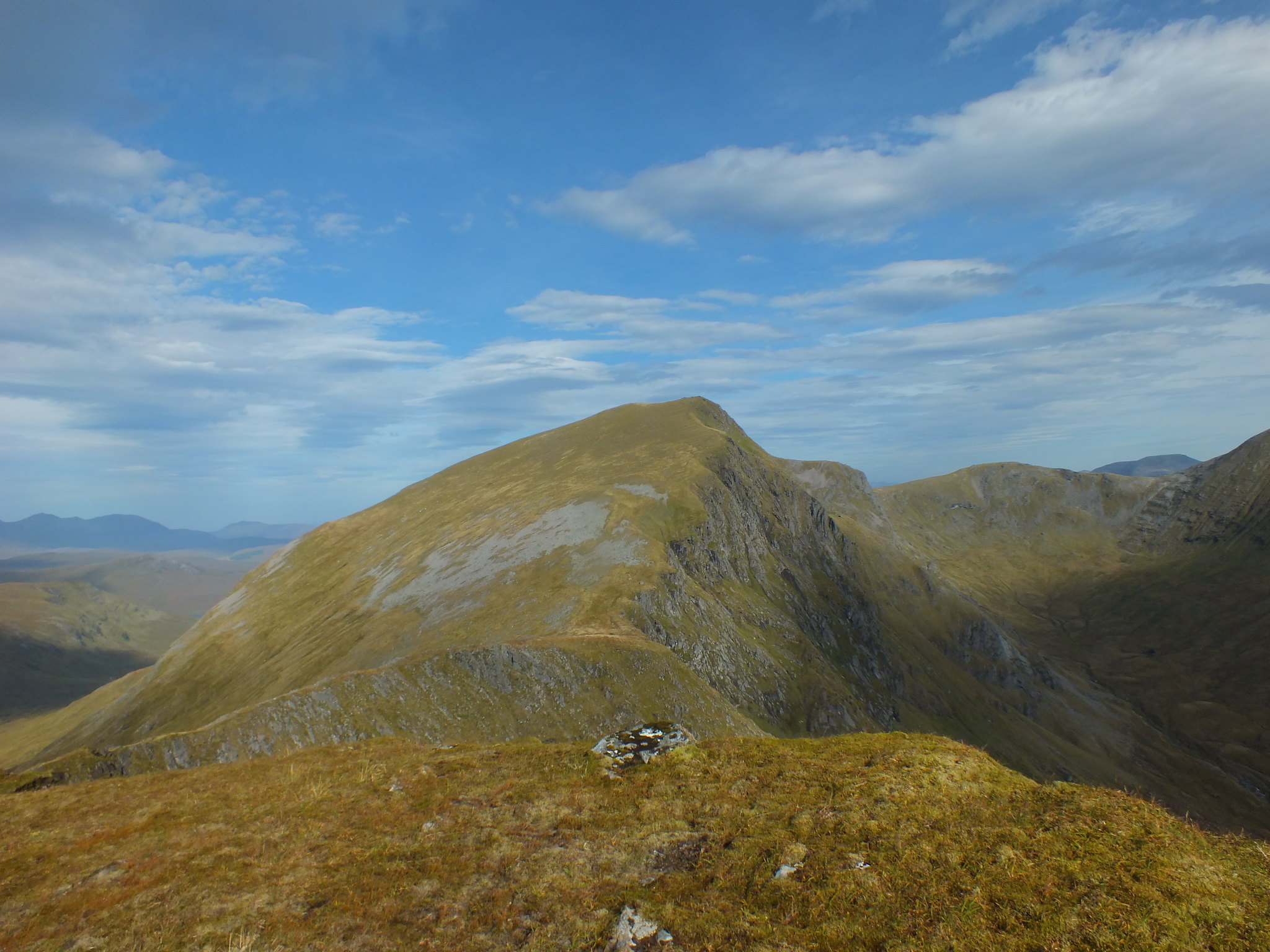 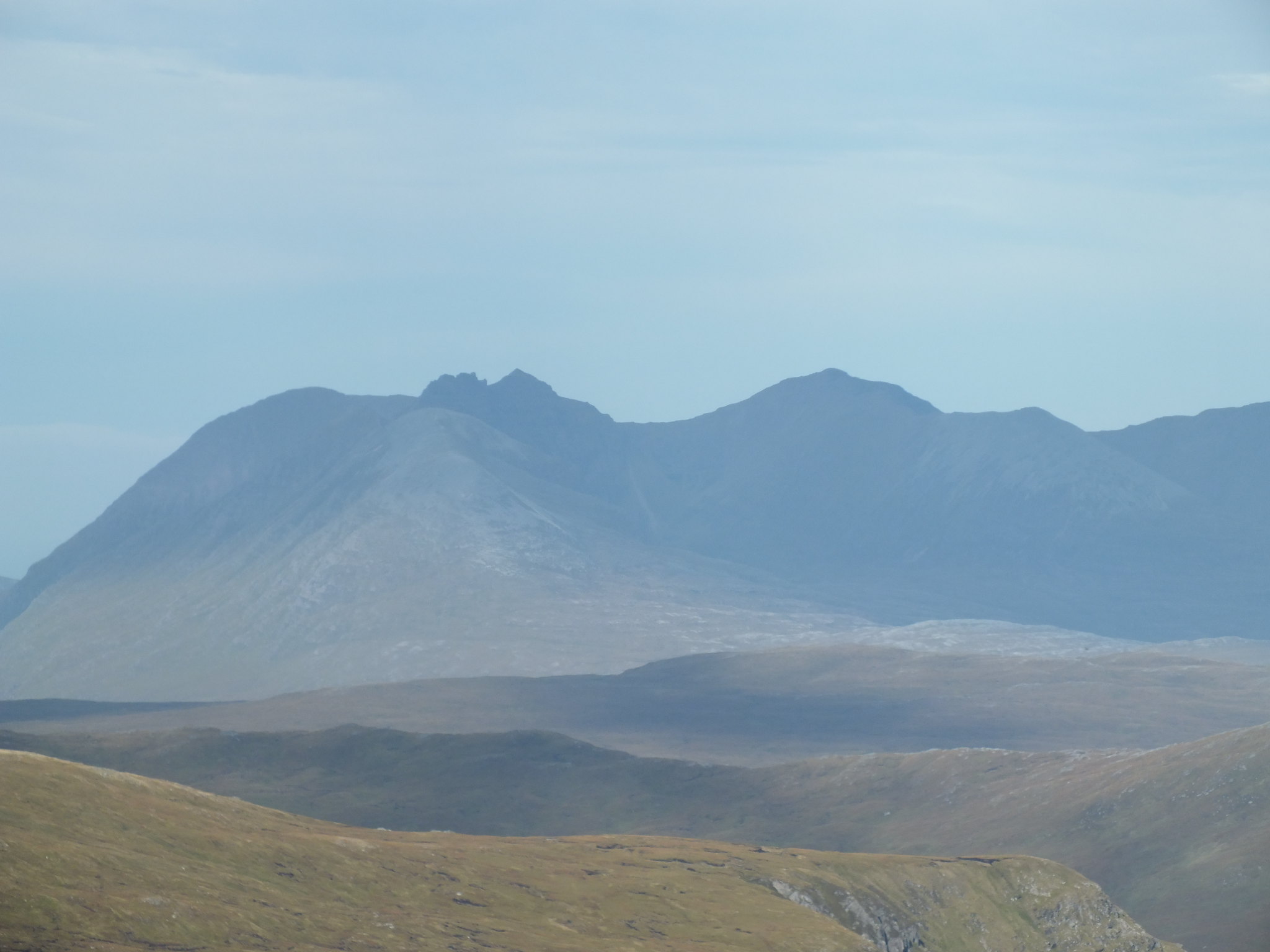 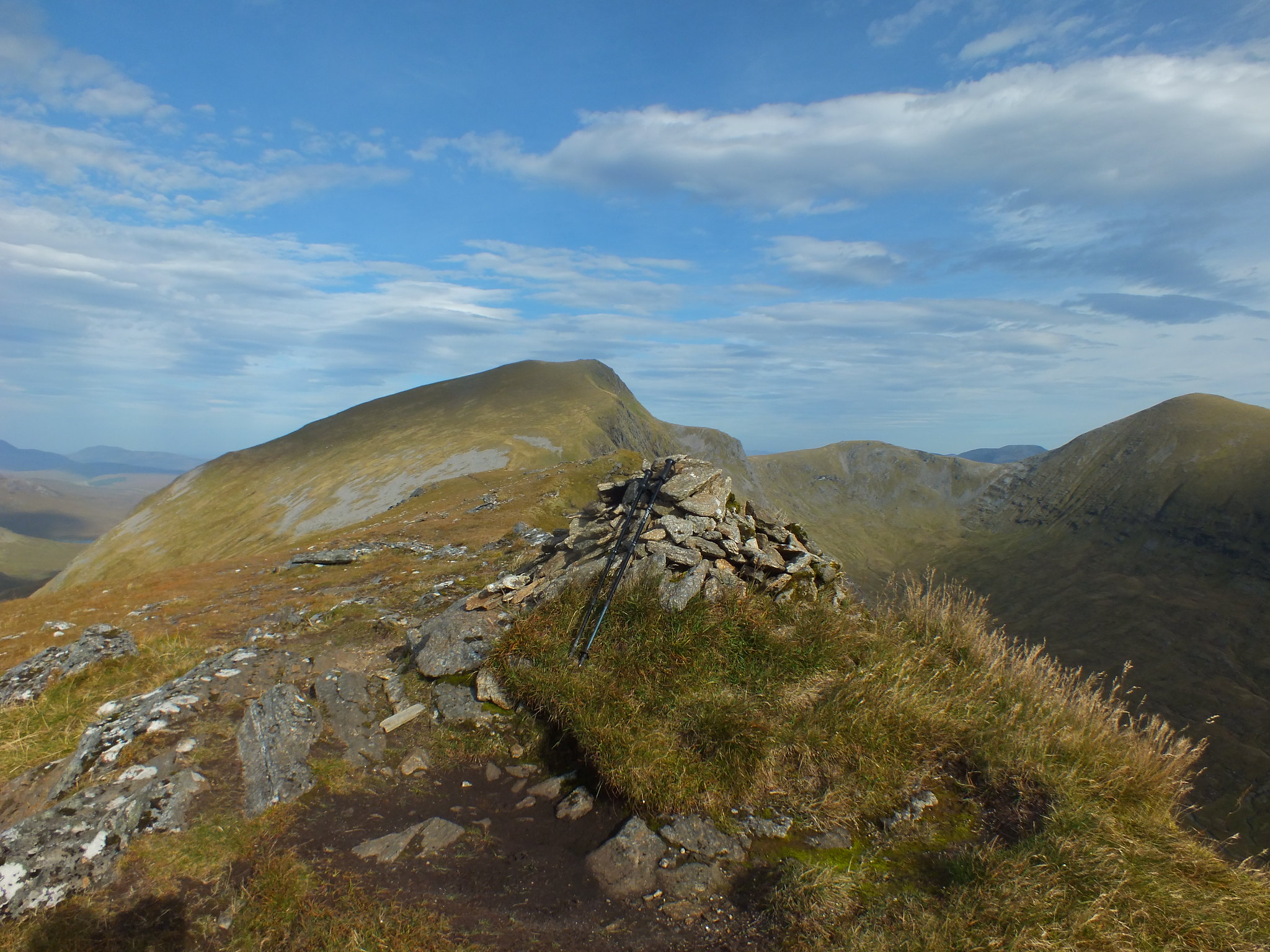 Now for the return journey, uplifted my rucksack and surveyed the way down. There was a faint path initially, I started to follow it but it looked a bit damp further down, which didn't look too inviting so as I occasionally do, I decided to go my own way. I opted to traverse downhill and as the main path could be seen in the distance it was just a matter of picking the best way down.
Once on the main path progress was good and all was going well until I reached the burn again. The cairn on the side of the burn was indicating the crossing point, but I decided to continue on the east side and judging by the trampled grass plenty of other walkers had made the same choice

Whilst walking alongside the burn I was constantly looking for a crossing point but in the end gave up, as I knew there was a rickety bridge further on. The problem with staying on the east side of the burn was the underfoot conditions were a tad damp, but my boots were doing a great job and keeping my feet dry

It is not everyday you can beat Naismith's time

Really pleased to finally nail the Central Fannichs and especially as I reached my end of year target of 230, so every hill now is going to be a bonus

The forecast for the coming week is attractive and I am heading out again on Wednesday, the NW beckons again

Some great clear views on that walk, fantastic! Just noticed your munro count...I better pull the finger out

Nice one Martin, looks like you had good conditions for a solo day out, shame about the wind tho'.
That magic 282 is getting closer, hopefully you'll be celebrating sooner than planned.
Fingers crossed