What's going on at the top of Sgurr an Airgid?

What's going on at the top of Sgurr an Airgid?


As instructed by Rodmiester we were keeping this one for a clear day so we could get the views. For that reason it had been lurking around near the top of the list with the forecast for the west never looking as good as we wanted on the days we were able to go. Then things got more urgent as I was eyeing it up as a potential walk for an all age group from my church including a 4 year old. Last summer he had climbed a good part of the way up Ben Wyvis - but that was on a solid and well drained path. The blurb says the path up Sgurr Airgid is good but the only way I could know would be to try it out. There was only one day Moira and I were both free in the time frame so we just went for it despite not being as confident about the forecast as we'd have ideally liked to be.

We parked in the car park for the Clachan Duich burial ground and crossed the road to the so called kissing gate on the other side. We walked through a clump of trees and over a burn and it was quickly clear this path is not as well drained as the Ben Wyvis one and after recent rain there was a lot of water lying. I could imagine the wee chap falling flat on his face in the mud, getting soaked and the parents having to turn back with him rather quickly. That wouldn't go down too well after the long drive over. Within about 10 minutes I concluded this was not a suitable walk for small children and I would have to think again about a suitable hill. But in the end the weather wasn't playing ball anywhere and we cancelled the plan to climb a hill and did something else.

When we left the car there was a lot of low cloud about which we hoped would lift and by the time we were nearing the Allt na Ruaraich it had obligingly cleared. 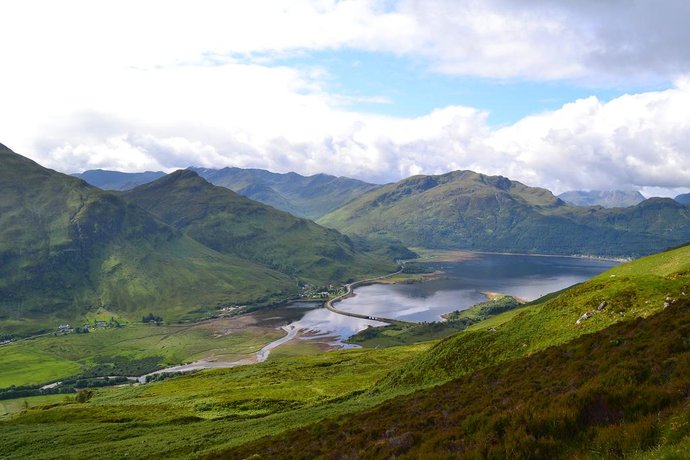 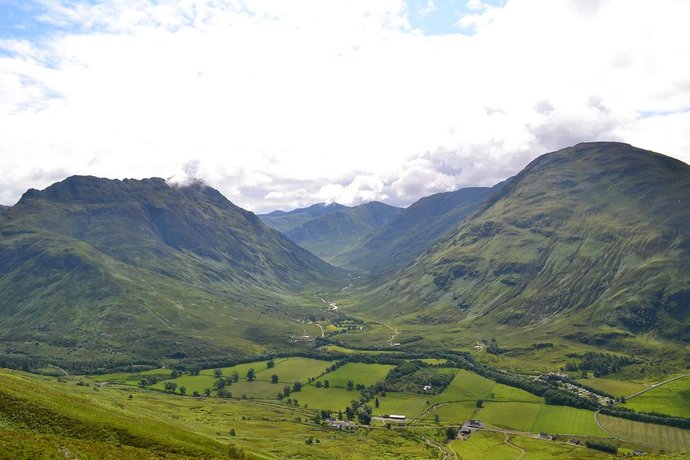 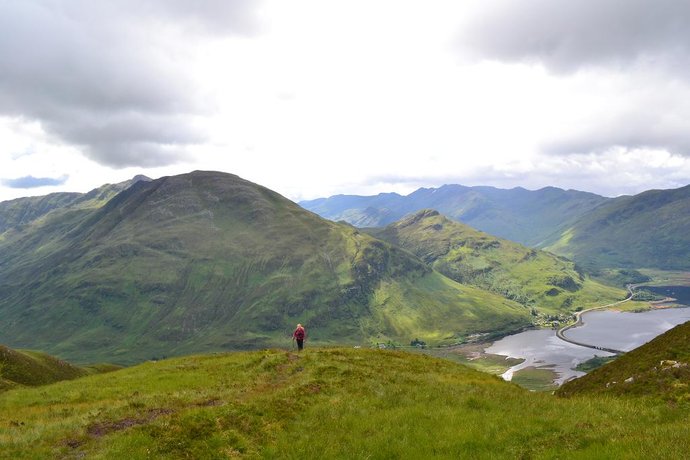 The path zigzags nicely so the gradient is never steep and soon it hugs the side of the ravine of the Allt na Ruaraich with a steep drop to one side and once again I thought this is a route where care would be needed with small children. We met an American man and his teenage daughter on the descent. They were on holiday in the area and had left early to walk up to the cairn on the ridge to get the view. When he said they turned back at the cairn I wondered why anyone would go that far and not continue to the summit but when I got there I could see why as the summit of the hill is quite a distance beyond the cairn at the top of the path. 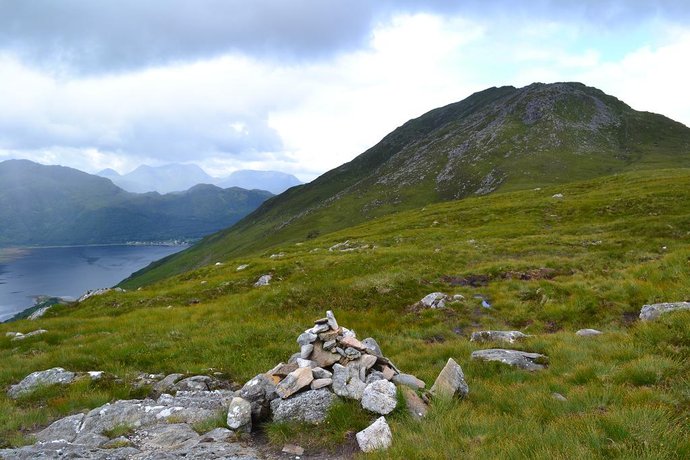 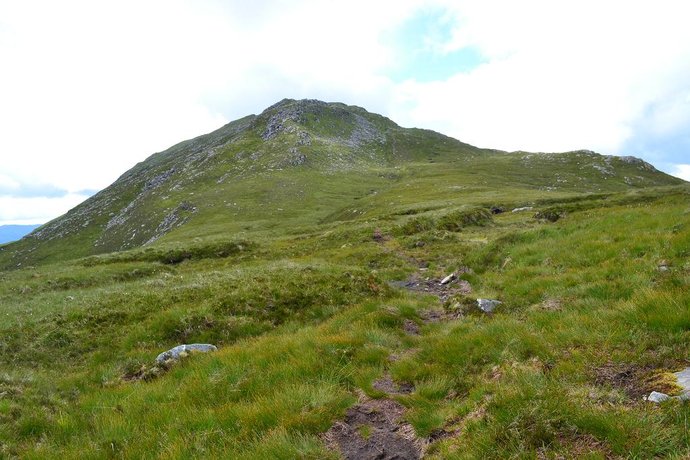 It turned colder so we donned jackets and were surprised to meet a lady coming down from the summit in a vest top. She had been in the lee of the hill in descent but even so this was one hardy lady. The path at this stage was much drier than lower down and the next part of the route would have been fine for the kids if I could just organise for a helicopter to drop them off at the bealach.

After the steep section the path is less distinct but we were able to follow it all the way to the summit. It winds its way through rocky knolls and over a few false summits to the final short rise to the trig point summit. The views on every side are breath-taking.

Zoomed to Ben Sgritheall and Rattagan village at water's edge 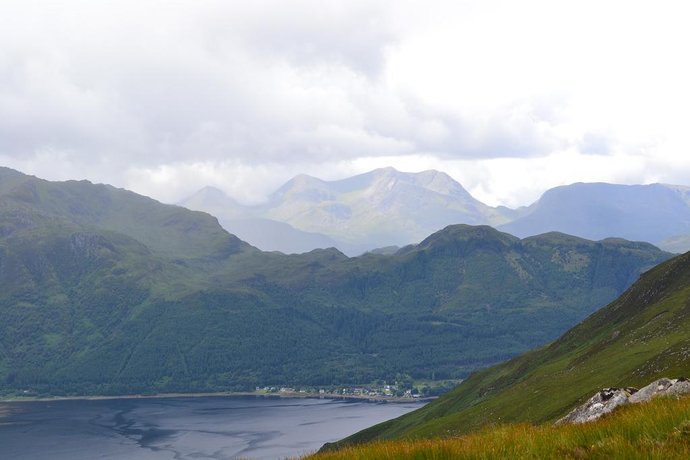 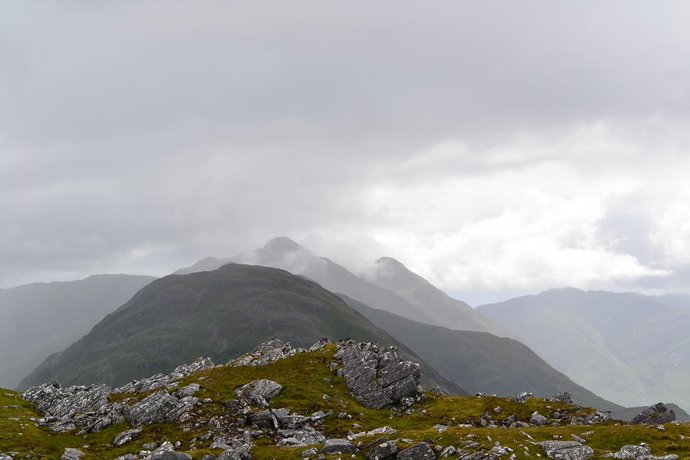 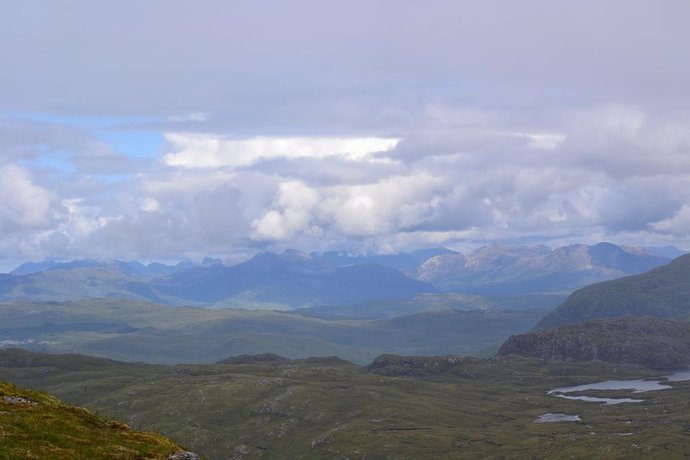 West from summit towards Skye 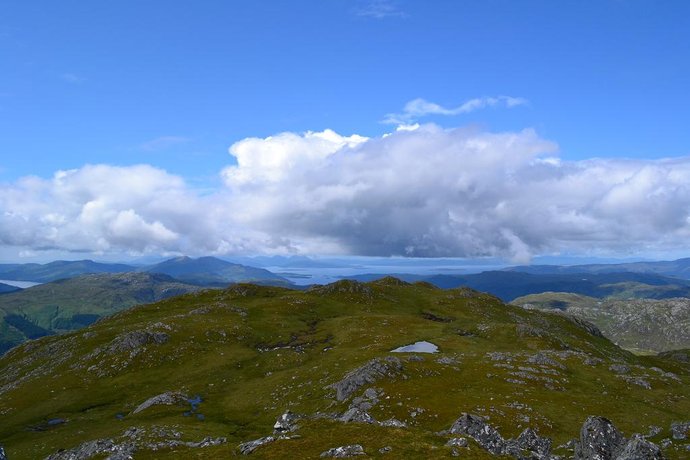 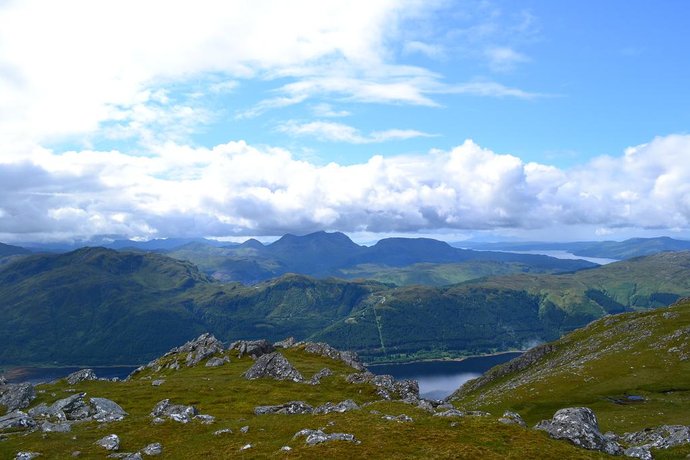 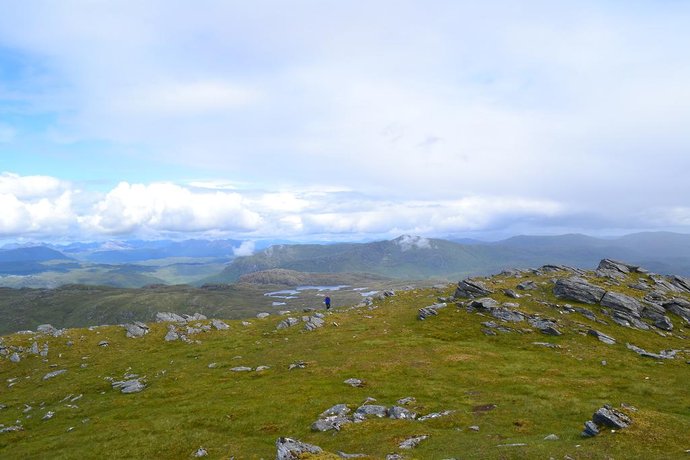 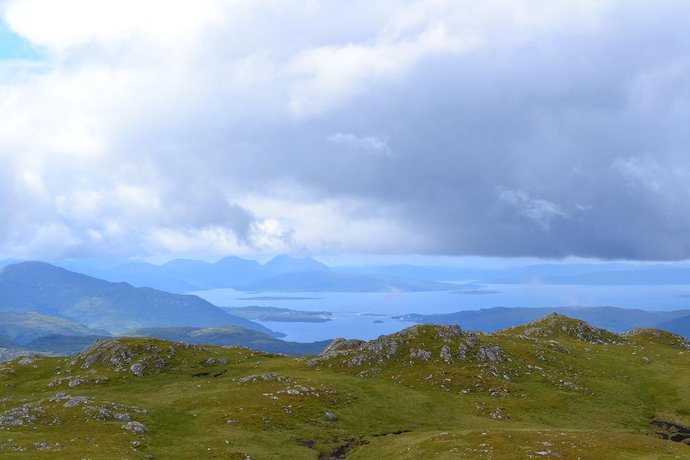 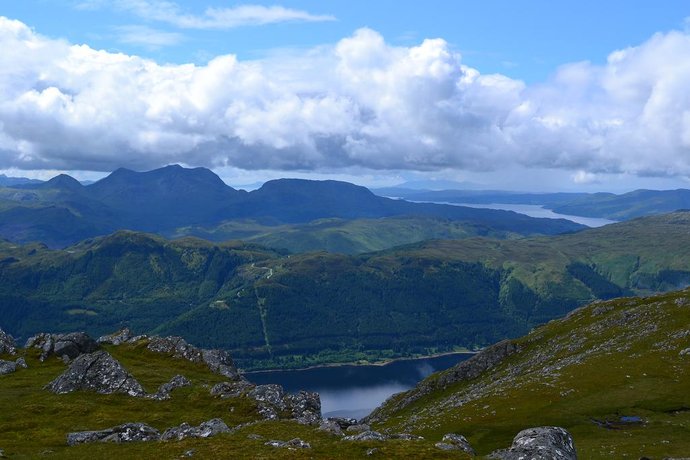 The cylindrical Ordinance survey trig point has been broken and a long wooden stake wedged into it. Not sure if this is for any practical purpose like protecting from lightning strike - or for the look of it. But to my eye it would look better without it. It's unlikely some random walker just happened to have a long plank with him which he decided he didn't need - so more likely to be intended than an impulse thing. It wasn't like this when Annie MacD was up last November. Any ideas anyone? 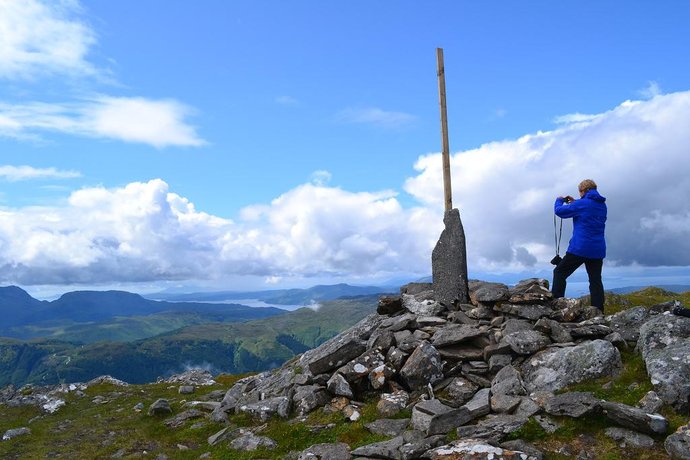 We sat on rocks at the foot of the trig for ham rolls, homemade shortbread and coffee and soaked in the views to the west. Life doesn't get much better than this. There wasn't a soul about, despite this being an easy to climb hill with outstanding views in a popular tourist location on a Saturday in July! Such a contrast with the hills around Keswick (where we were a couple of weeks earlier) which were heaving with folk everywhere you went. We sat so long we were suddenly aware the cloud was drifting in like puffs of white smoke below us. 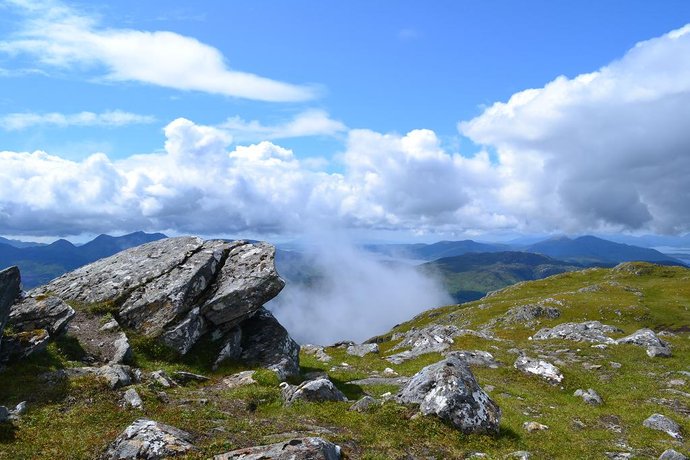 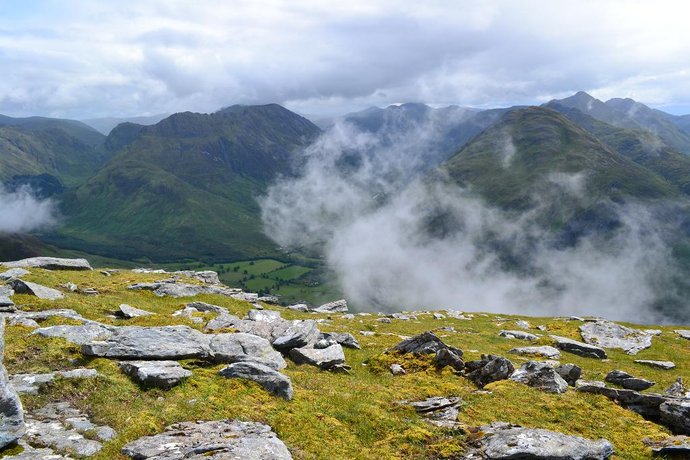 I had folk arriving to stay and needed to be home to feed them so we reluctantly tore ourselves away and began the descent. We'd only walked about 5 minutes when we came across a family sitting on a large flat rock having a picnic. They weren't sure how much further it was to the top so we reassured them they hadn't much further to go and encouraged them to keep going to get the views.

Applecross hills from the descent 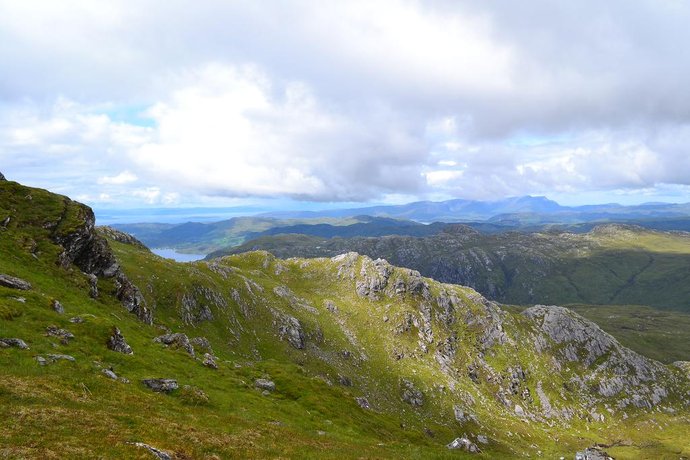 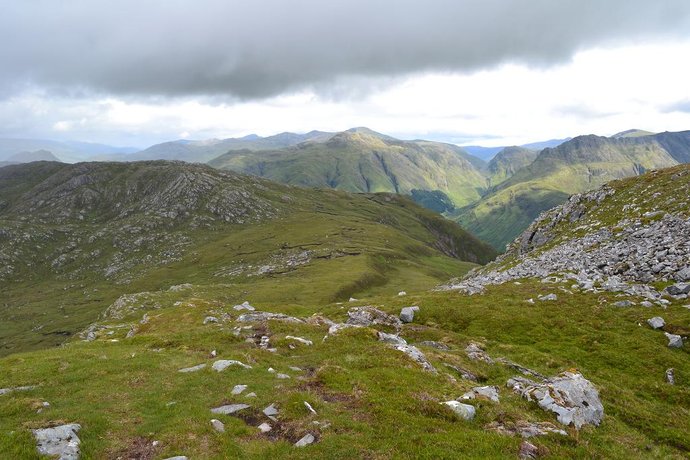 The path is easy to follow and leads to the cairn at the start of the descent down the side of the Allt na Ruaraich. 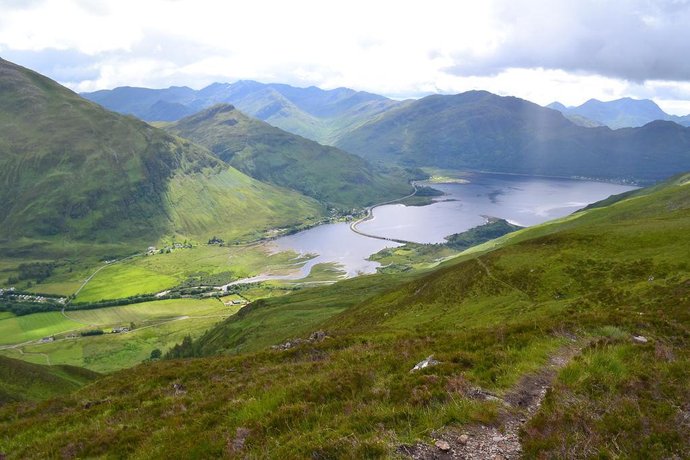 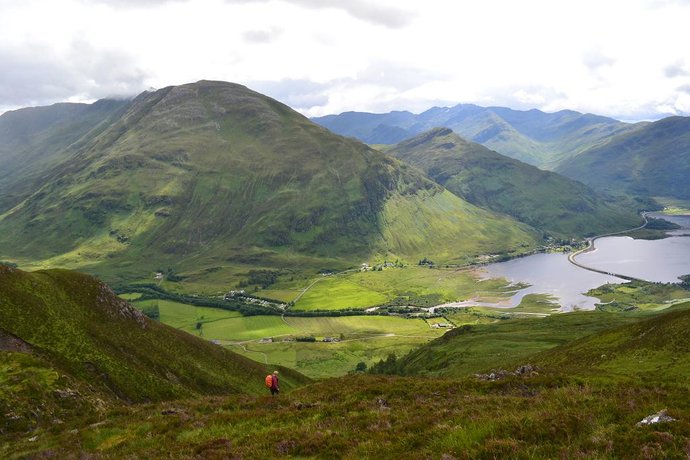 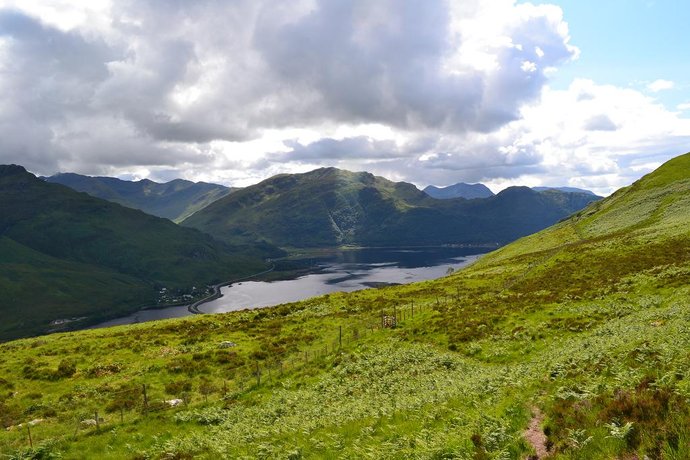 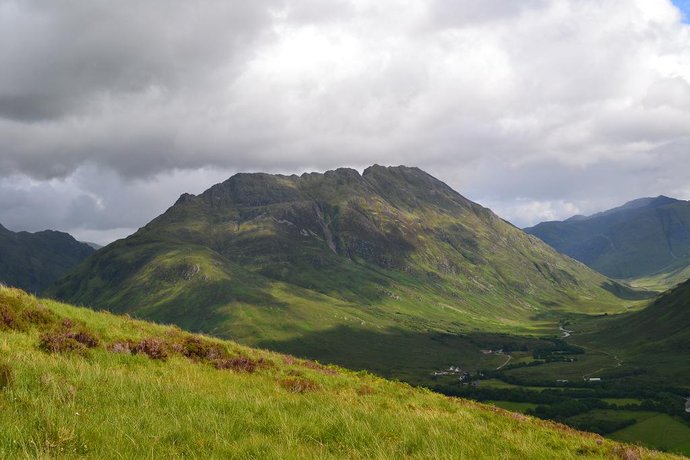 The path passes between remains of old shielings 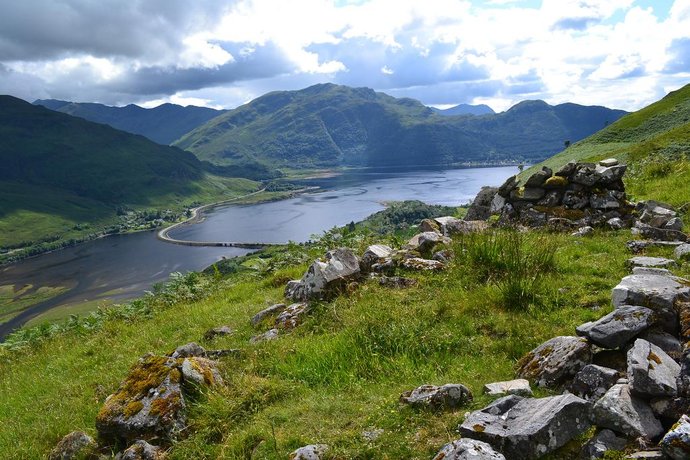 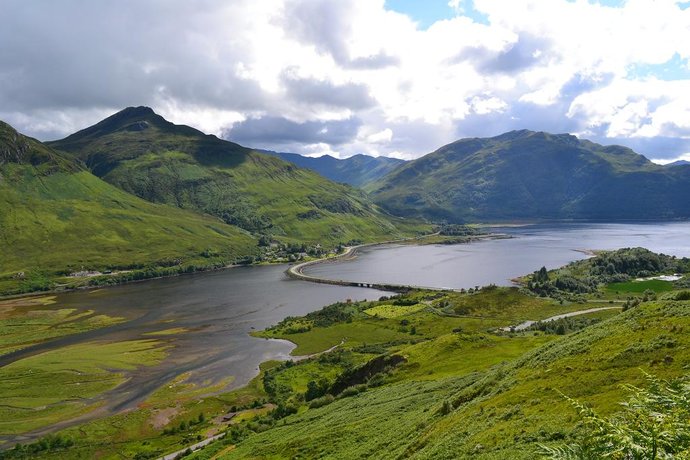 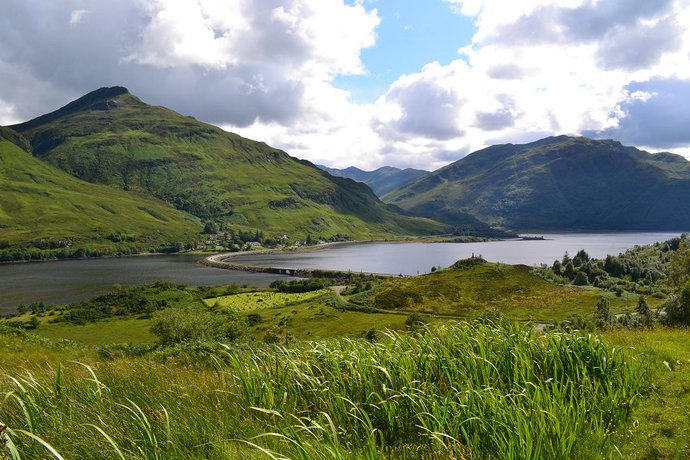 Overall verdict on this hill? It's a gem of a hill which lived up to its reputation for superb views and ease of access. But on the day we went the path was very wet and would have posed difficulties for small people who don't have the experience or length of stride to deal with mud. Maybe after a long dry spell I could take them as I'm sure they would love the winding path and the rocky knolls at the top - and hopefully when I do the trig will be without its protruding stake!

Looks like a nice day for it - one due a revisit from me as I did it on a wild winter day and practically had to crawl the last few yards to the top!

The damage to the trig point could well have been done by a lightning strike, but the piece of wood is weird....

SaA looks superb in autumn colours! One to revisit on a good day, we did it in winter, cloud came in and we never saw the full extend of the views.

Strange thing about the trig point, maybe a caber tosser was training on the summit and left his big stick behind?

That looks like a lovely walk. Definitely one to be saved for a good day for the views!

And lucky you, you still get to recce another walk for your church group!

Glad you enjoyed the views, pity about the Summer we have just had otherwise the path might have been a bit drier. Funny old stick at the trig point, not there when I climbed it

jmarkb wrote:
The damage to the trig point could well have been done by a lightning strike, but the piece of wood is weird....

I thought the same.

Soon most of them will be gone....no maintenance of the Trig points now....most of us will miss these summit, well mostly on summits,

indicators. Although a recent report from a trip to Goatfell shows that perhaps some of these are being well looked after...privately?
The Trig on Sguman Coinntich was on shaky legs ten years ago...maybe no longer still standing? 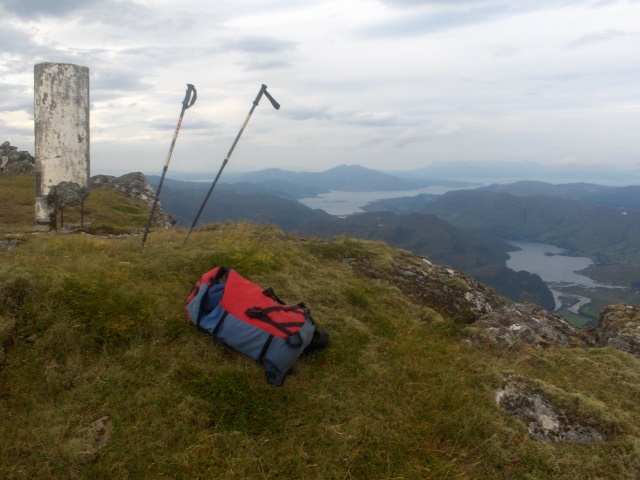 It was still standing in February 2013, but it lost more of its base part, comparing to your photo: I like the trig points, they are useful as little tables to serve your sandwiches on

BlackPanther wrote:
Strange thing about the trig point, maybe a caber tosser was training on the summit and left his big stick behind?

Silverhill wrote:That looks like a lovely walk. Definitely one to be saved for a good day for the views!

And lucky you, you still get to recce another walk for your church group!

Doing the recce is one of the perks - and someone's got to do it!

The Rodmiester wrote:Glad you enjoyed the views, pity about the Summer we have just had otherwise the path might have been a bit drier.

For a Scottish hill it was par for the course - just not the best idea for small children.

gaffr wrote:Soon most of them will be gone....no maintenance of the Trig points now....most of us will miss these summit, well mostly on summits,

Useful for balancing cameras on except when a gust of wind blows them off to smash on rock below which happened to Moira's camera on Glas Tulaichean.