Our glorious return to the hills the previous week was followed by another re-visit to a local Corbett. This time rather than east, we went north to Glen Calvie. The classic Carn Chuinneag approach seemed a good route for Kevin, to break him back into the more serious walks. It's on a good path most of the way and not too steep. Distance, less than 20km, could easily be walked in daylight with plenty of time to spare.
Three years ago we enjoyed a wintry day on this hill, views were lovely but it was so cold we couldn't really enjoy them for too long. We took a few pictures on the summit and quickly ran back down

Yet I enjoyed this shy little Corbett very much and as it is not far away from home, I put it on the list to re-do some time, preferably in warmer conditions!
Now the day has arrived and the morning saw us crossing River Carron. Lucy was with us again, all excited about her new 13th Corbett 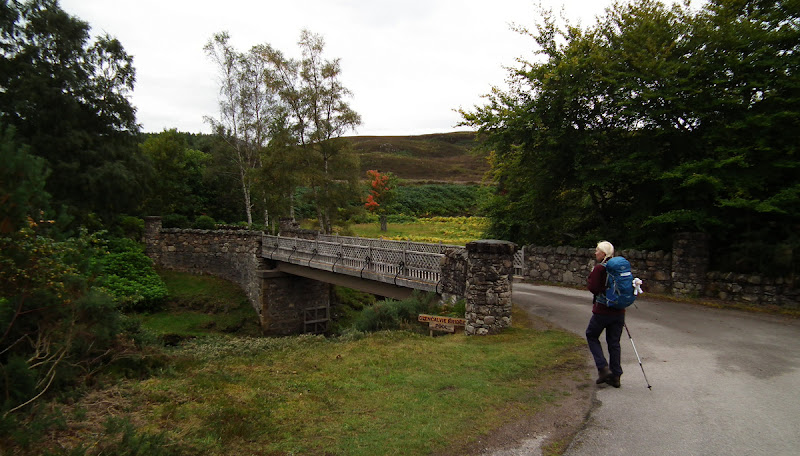 it is always worth to stop on the bridge for a few seconds and listen to the humming sound of the water... So relaxing 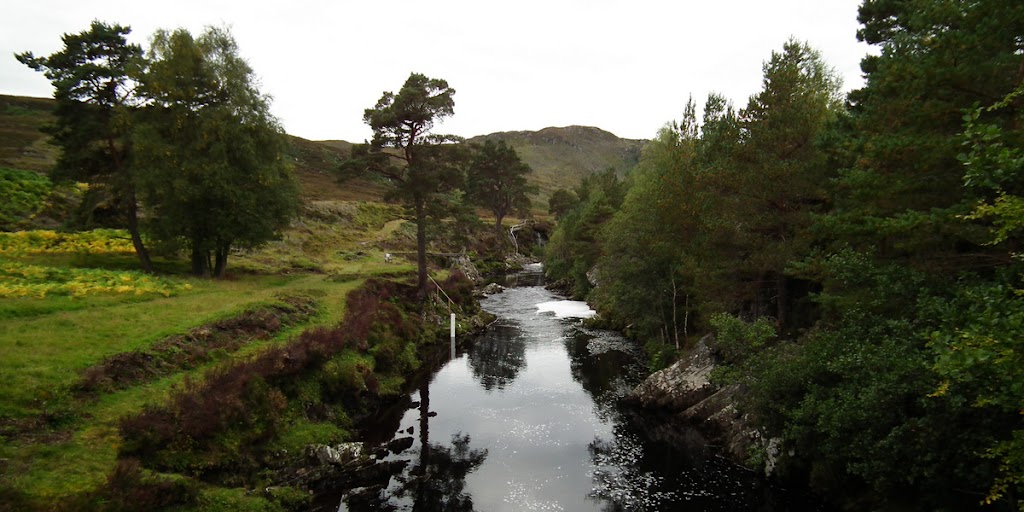 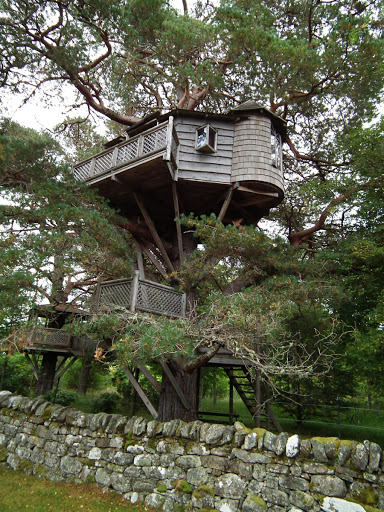 Our route was the standard one for Carn Chuinneag, taking in both tops (we missed the lower one the previous time):

Track_ARDGAY 26-09-15.gpx Open full screen  NB: Walkhighlands is not responsible for the accuracy of gpx files in users posts
Just past the lodge we met local stalkers setting off... All right, we expected they would be about, it's the peak of the shooting season. Now, they might chase us off the mountain, Kevin was concerned. I made a sweet face and asked politely, where they were going to stalk and if it was all right for us to do the walk up the Corbett? Either my charms worked or the guys were not as bad as my husband thought, they told us it was OK as long as we stayed on the path/main ridge of CC. They were going east towards the Graham, Carn Salachaidh. Everything very friendly, with smiles. Can we be civilized? Yes, we can!

We continued on the track south towards the mountain and past Diebidale Lodge, soon the mountain was looming in front of us. I wrote "looming" but it didn't really feel that big the second time... Did Carn Chuinneag shrink or did my confidence grow? I had similar feeling when re-doing Ben Wyvis and Beinn Eighe, maybe it has something to do with the fact, that I knew what was awaiting me up there... 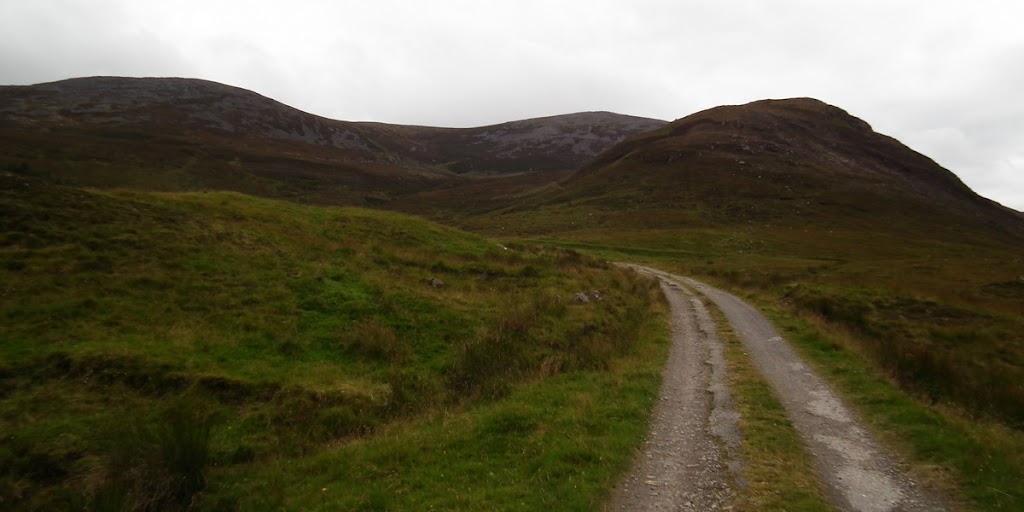 The start of the stalker's path is obvious if a bit wet, generally the first 200m up were rather boggy, but that's probably because it had rained the previous night and water was coming down the slopes... Not too bad a bog though 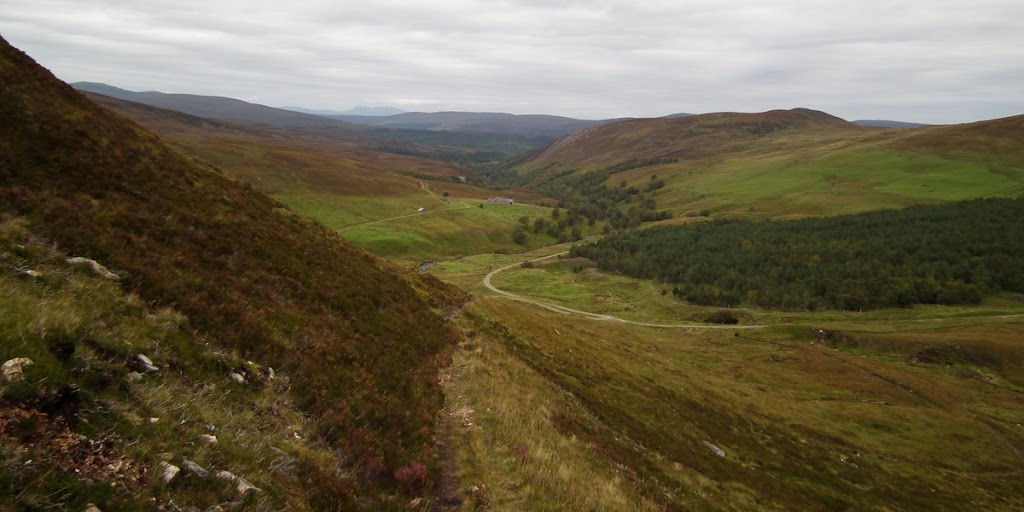 Higher up the path dries out: 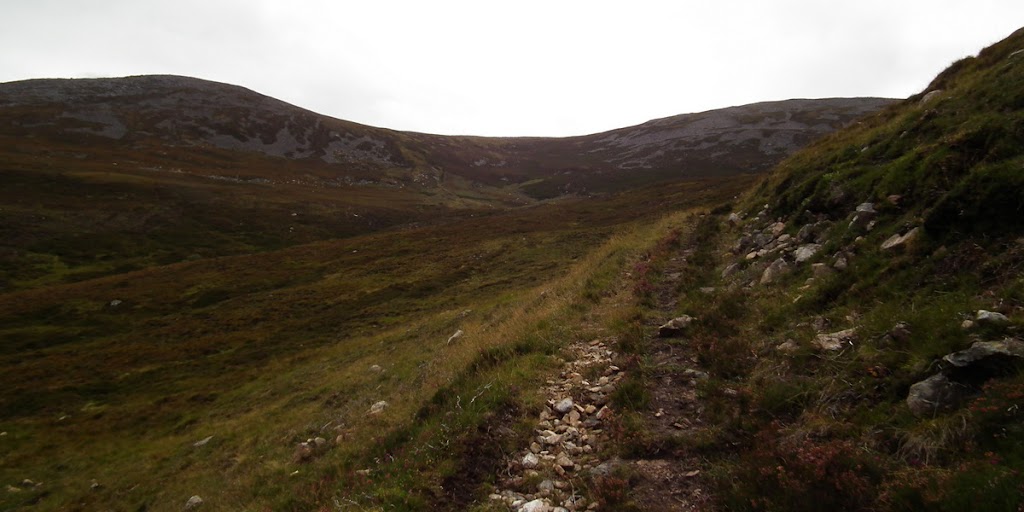 We took a short break on the height of 450m where the path evens out for a short distance. Not that we were tired, but after such a long break in hillwalking it felt superb to be back again and breathe in the quiet solitude... 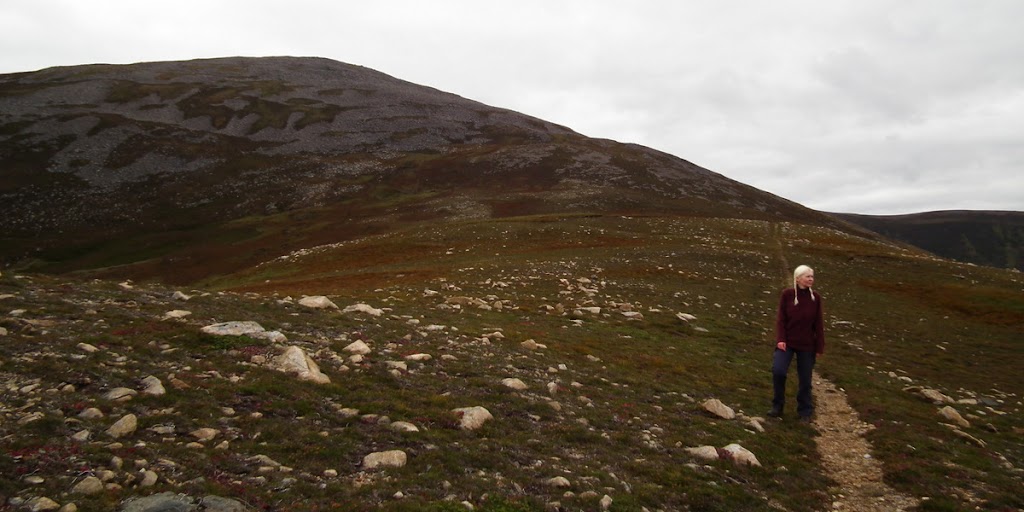 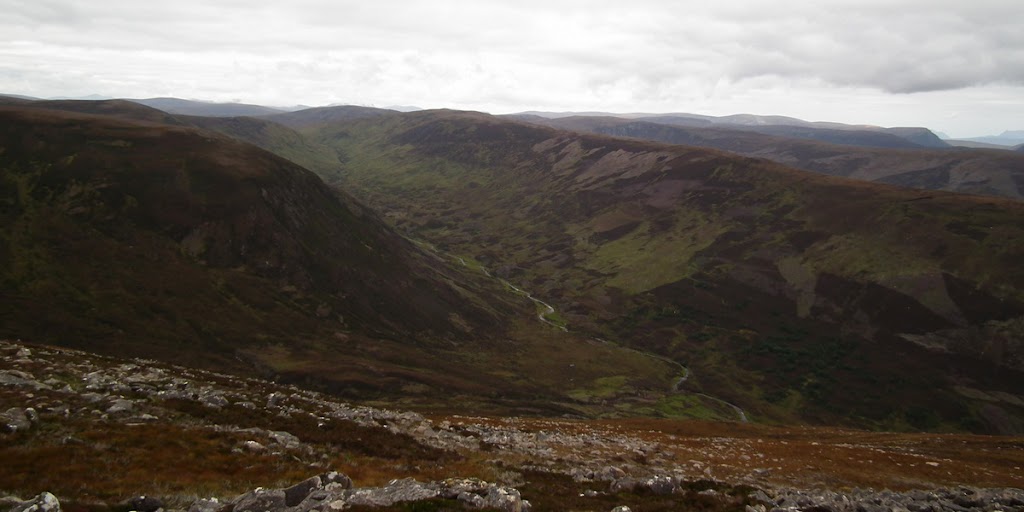 The more distant views were a tad hazy, but with the cloud well above summits, I could easily recognize familiar shapes of Assynt hills. Conival/BMA for example:

The path zigzagged up and then traversed just below the lower top of the Corbett, heading for the main summit. Next to our hill, a local Graham still on to-do list, this one preferably after the end of stalking season: 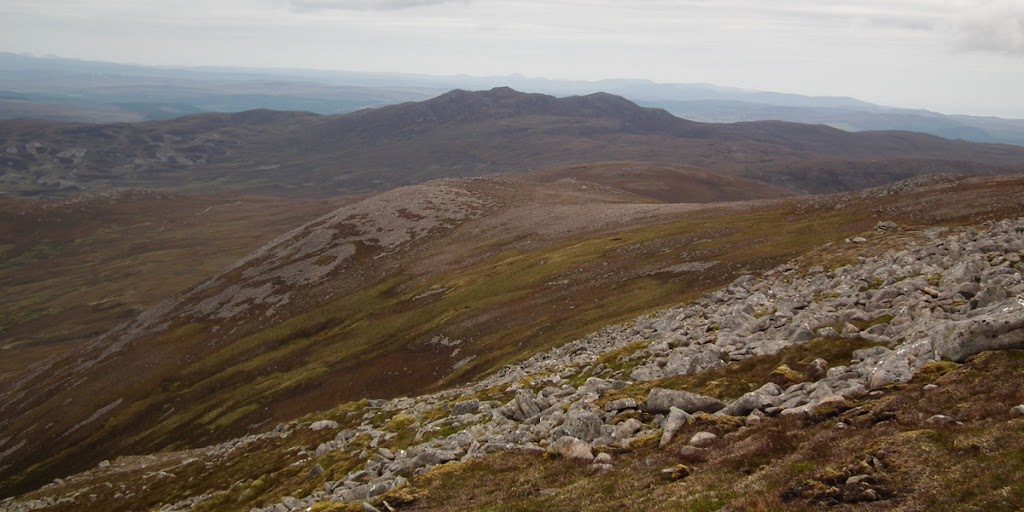 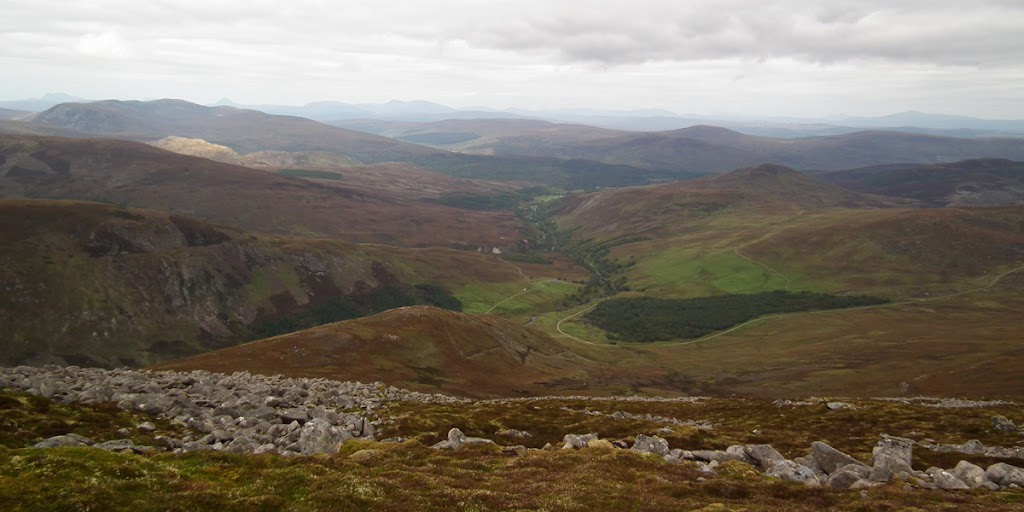 The path bypasses the main summit, but it's only a short climb up grass and flat boulders: 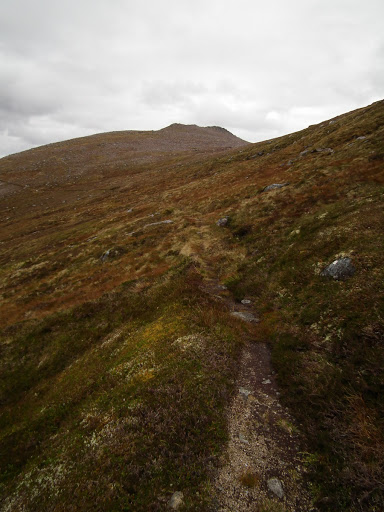 Behind me, Ben Wyvis: 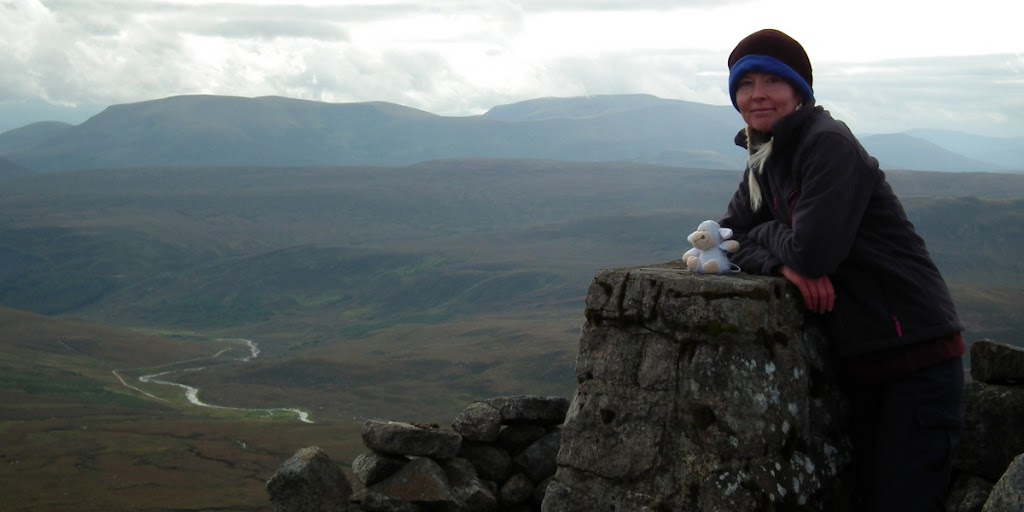 The summit was a wee bit windy but nowhere near as cold as the previous time. OK, views are always better on a crispy winter day, but this hill has them in abundance and in every direction! It was time to play hill spotting...
North-west to the breathtaking Assynt pano. Very few mountains are such a good vantage point to the weird shapes of the far north! 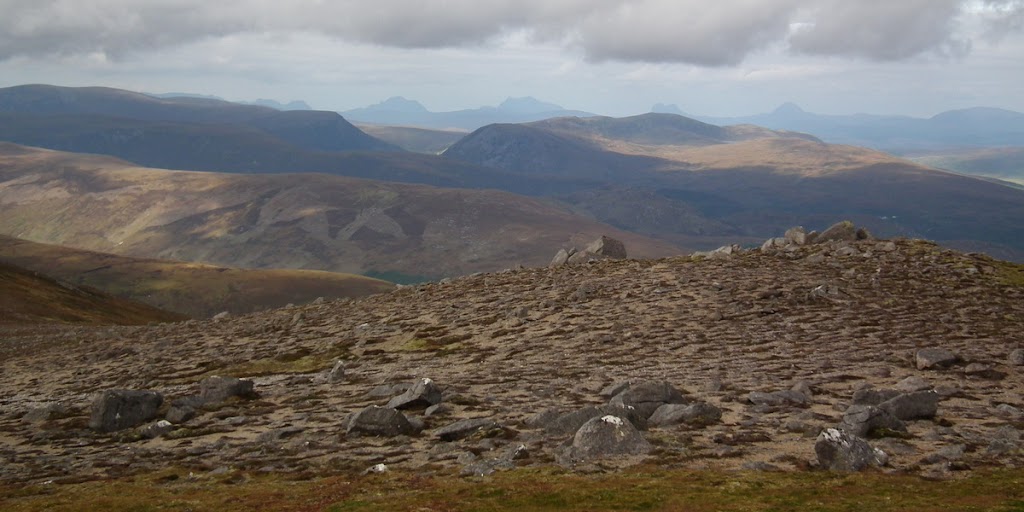 North-east from the summit, Carn Salachaidh, and to the right, the distant Dornoch Firth: 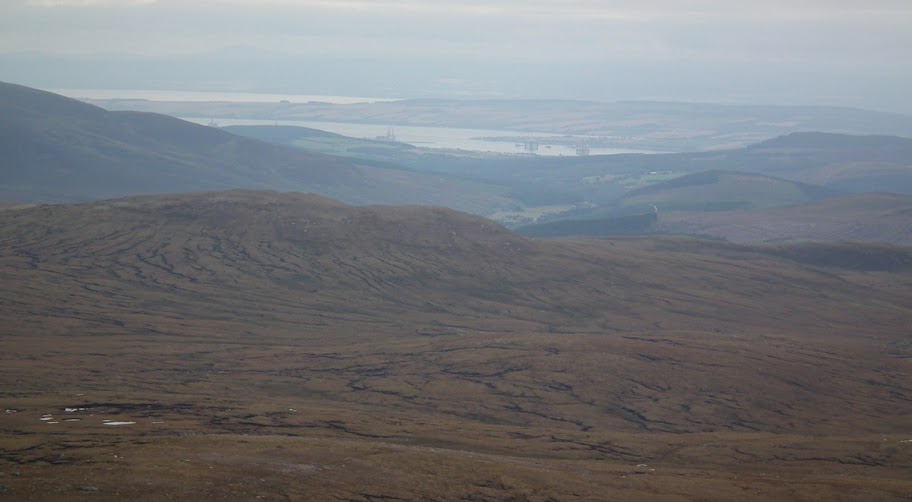 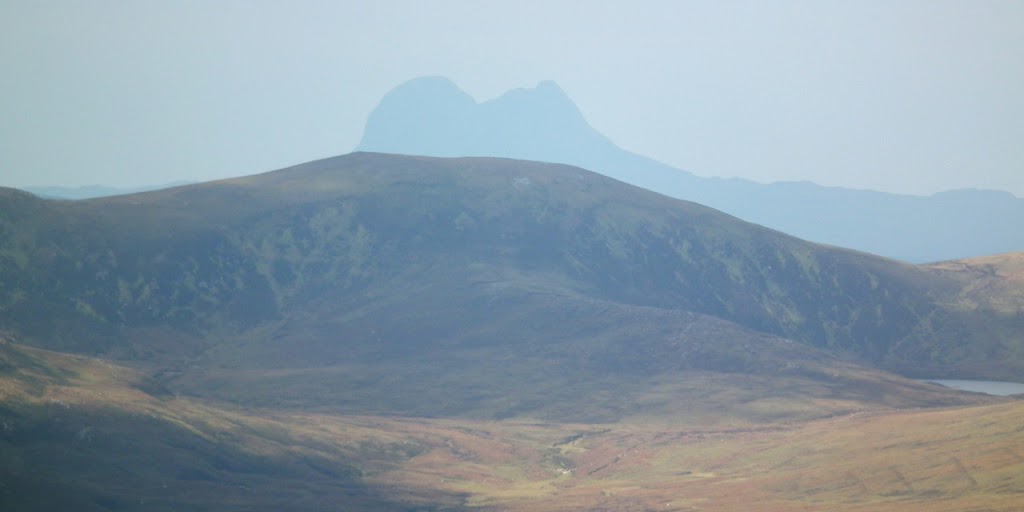 The trig point and Wyvis: 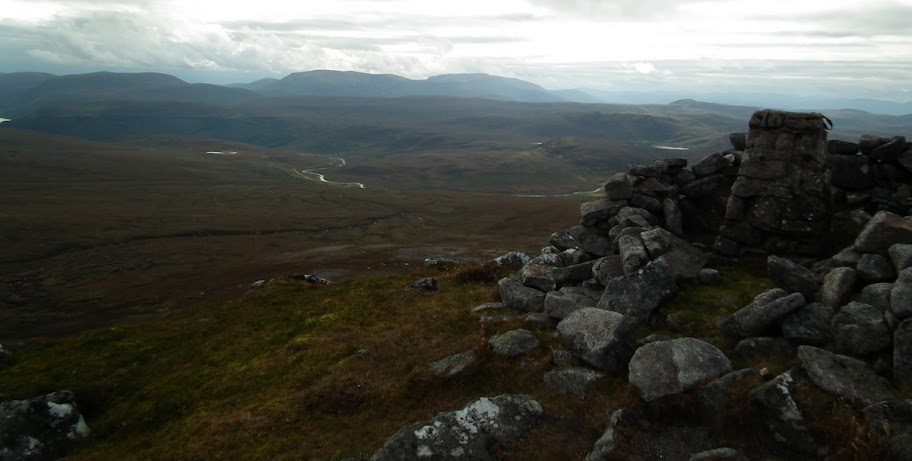 Arghhhhhh! Of course there always has to be a widfarm somewhere!!!!!

Chuffed to be out and about again! Actually, I lost half a stone since August (it shows, believe me! Hillwalking clothes are always too baggy) and Kevin was beginning to worry I was heading towards depression... 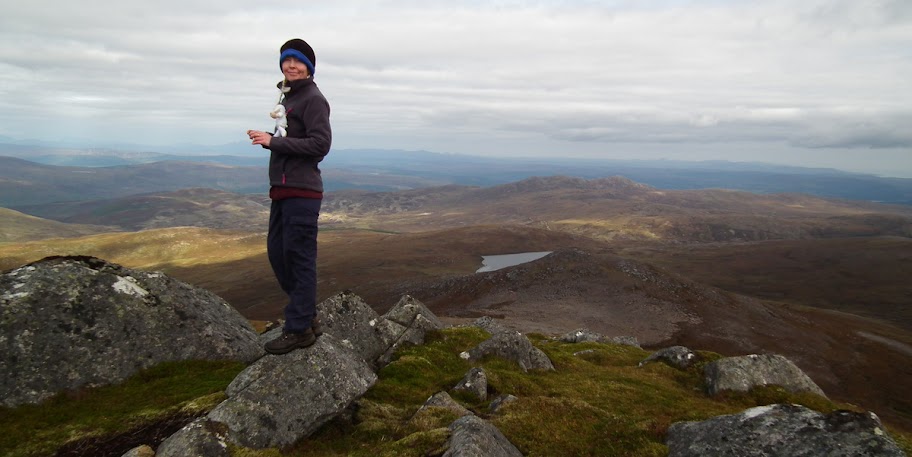 Looking west from the summit, with Beinn Dearg group and the Fannichs on the horizon:

He is back for good! I was glad to see him enjoy the great outdoors! The grimace was due to cold wind 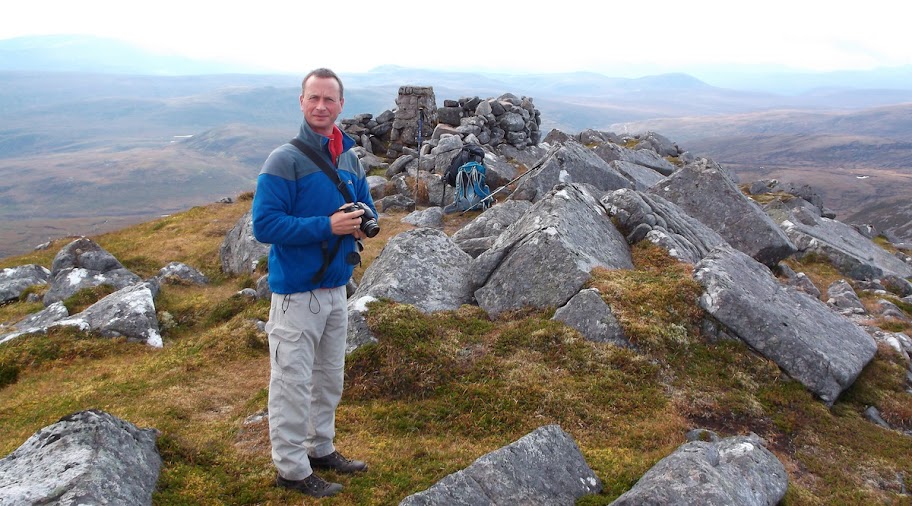 We descended a few metres and found a sheltered, flat rock where we could sit down, have a hot cuppa and stretch our legs all the way to the North Pole

We discussed our route options for the Graham Carn Salachaidh, it was impossible to add it to today's walk because of stalking, but it seems a nice little mountain to visit in winter conditions, walking up a stalkers path from Gruinards Lodge.
Eventually we left the summit and headed for the lower top. A small cairn is NOT on the highest point of this ridge so we didn't bother visiting it. Kevin busied himself with measuring the exact height of different spots on the ridge (a man and his GPS are best friends forever! )

I spotted something moving on a large rock: 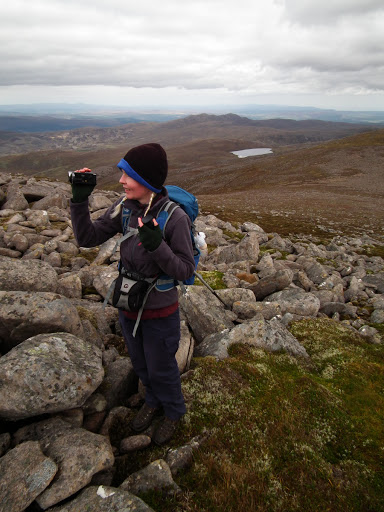 It was a ptarmigan, watching us intensely! 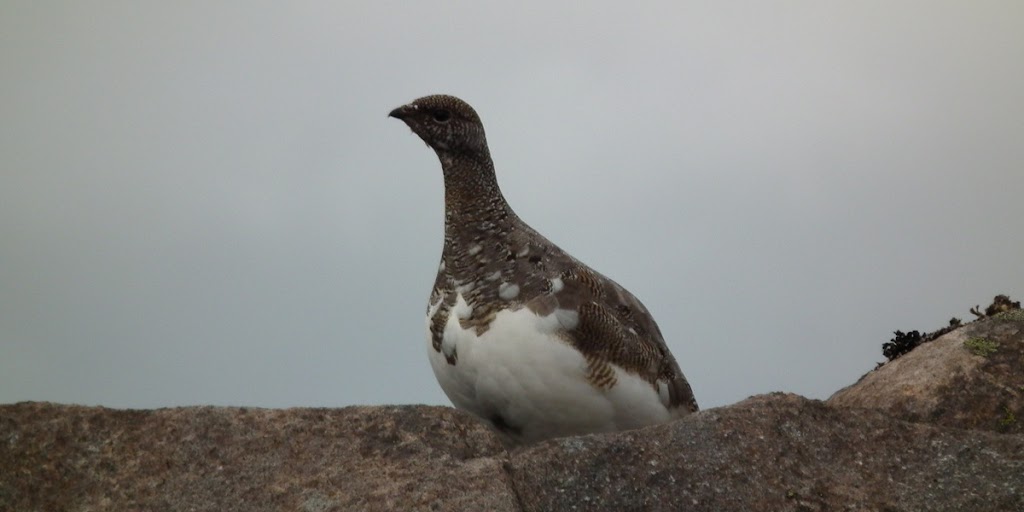 The summit of Carn Chuinneag and the panorama of Easter Ross: 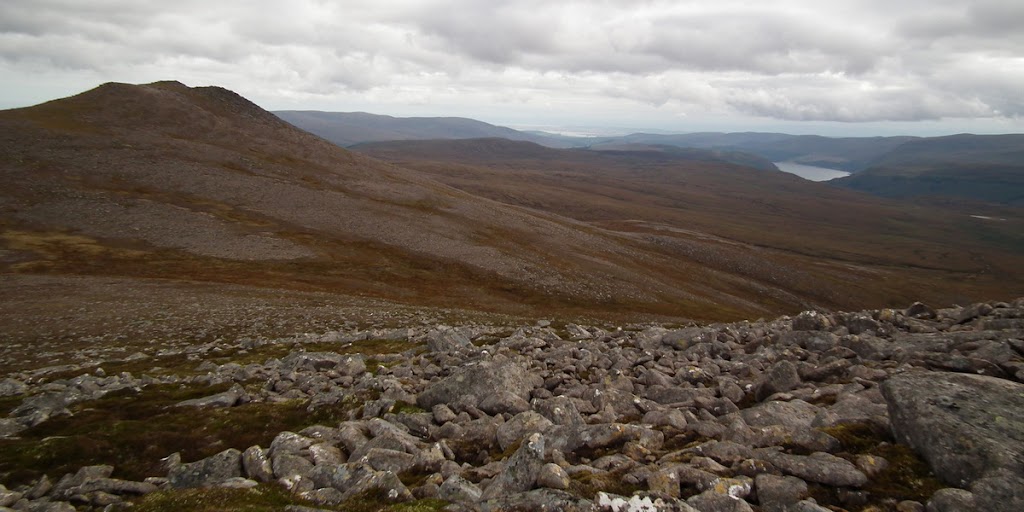 On the lower top, gazing in the distance, with Wyvis in the background...

A few more snapshots. The lower top is a better viewpoint to the west, with the mighty Beinn Dearg stealing the show (I'm sure you'll spot it!):

Assynt weirdos again. The hill in the foreground is an obscure Graham called Carn a' Choin Deirg, which can be done from the same starting point as Carn Chuinneag. One more target to look forward to!

Beinn Dearg group zoomed. Notice the sharp ridge peeking out from behind - it's An Teallach!

One last look at the stunning panorama, before we began descending towards the stalkers path:

We followed WH's suggestion by descending south-west towards the flat bealach. It was easy to begin with, soon we encountered a few bouldery fields, which slowed us down a bit. We hopped and jumped down the slope, a good balance training, especially that many rocks were loose and unstable. In icy conditions or with heavy layer of snow, it would be safer to retrace steps back east to the col between the two tops.
Near the bealach we spotted the path... 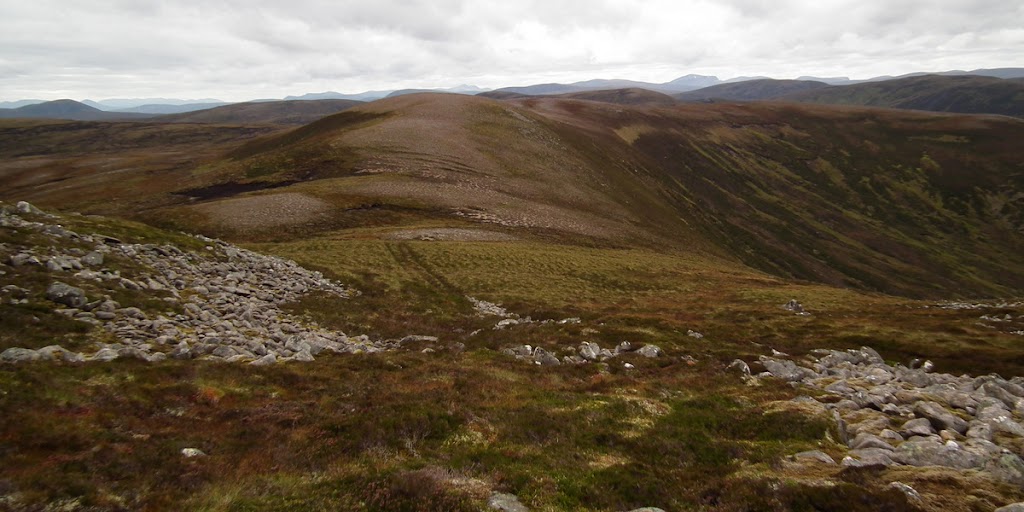 ...and the ruined shelter mentioned in walk description. The path passes just below the ruin: 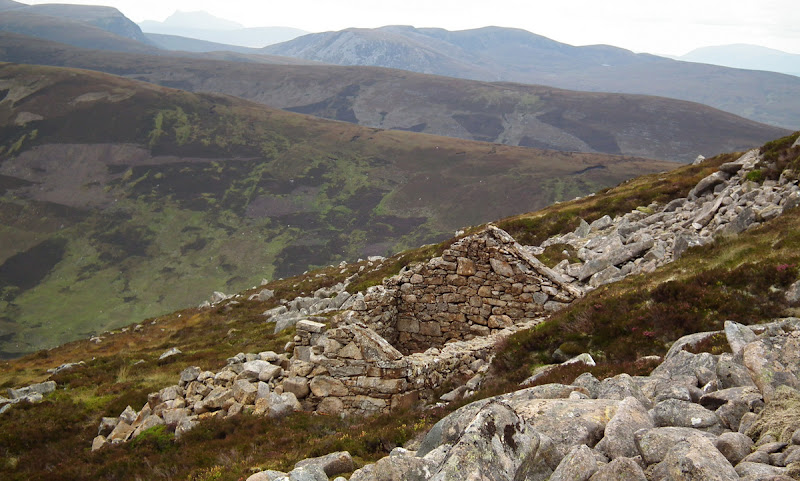 We picked the path and simply followed it back down. We took a slow pace, enjoying the day, as long as this lovely autumn spell lasts...
Once back in Glen Calvie, we were brutally attacked by a swarm of keds

They tried to wriggle in our hair, attach to our clothes, what a nuisance! A few of them hitch-hiked home with us

Summing up, a fantastic outing and an easy one! It took us about 6 hours to do it and that at a lazy pace. Out of the stalking season, one could walk a longer circuit, adding Carn Salachaidh. But even by itself, Carn Chuinneag is a little gem, well worth a bit of advertising. Highly recommended

Looking forward to doing this one now, hopefully very soon, thanks for posting looks well worth little effort, but it's a walking hill no Noddy on that track

Hi BP - I don't know this hill at all but from the reports I've seen on it, it looks good.

Hi BP
My son Cameron and I are going to attempt this little gem tomorrow, Monday 12 August. Thx for posting your pics and fun report.

I did this hill a couple of years ago in freezing conditions - to the extent that even the river right at the start of the walk was frozen! Really enjoyed it though, the views were good in clear weather and it was a nice winter walk. At the time I thought I'd go back and do some of the adjoining lower hills /ridge walks close by, but still haven't .... your report will hopefully act as a prompt for me to get back there! (Maybe after the stalking season though for the "off piste" routes?! It seemed a well maintained estate, so I'm guessing it must be quite popular with the hunting set come this time of year??!) 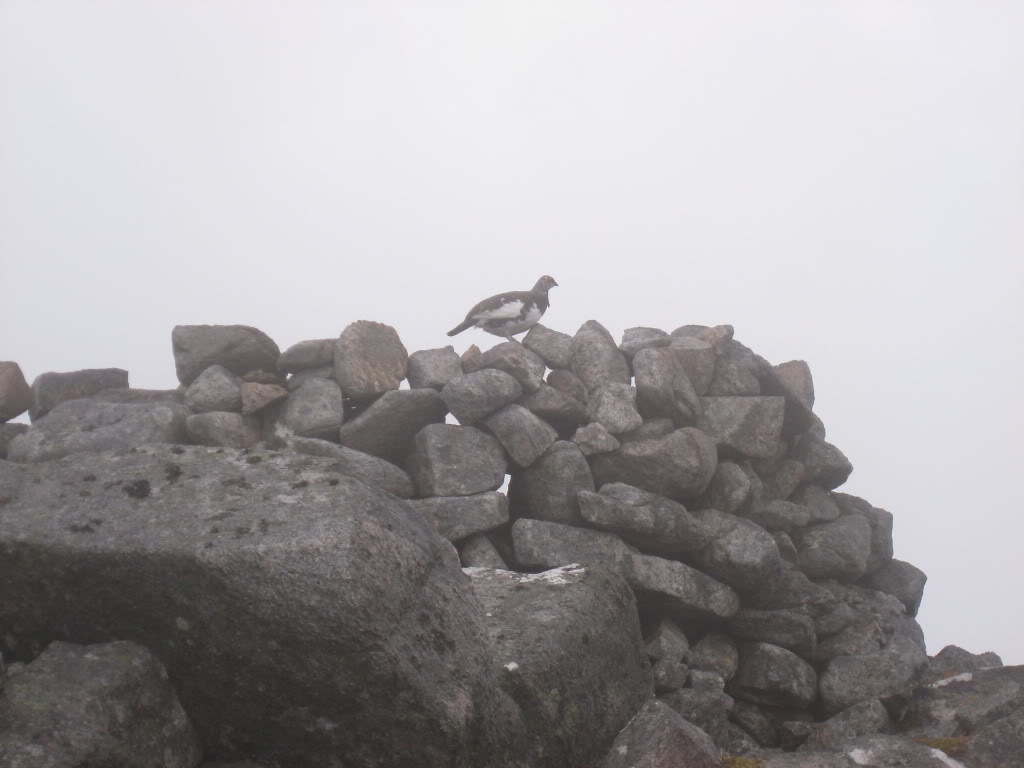 Aah, I was away from WH for a couple of days and here I see my old report bumped up

Glad to be of help, nice to know my stories help other hillwalkers plan their outings!

Re: off-piste routes. There is another very good circuit over a less known Graham, starting from the very same car park by Glencalvie Lodge. We walked it last year. Maybe not for stalking season, but it's a superb walk over two lovely long ridges, nothing too steep or too boggy. The Graham is called Beinn Tarsuinn, link to my TR:
https://www.walkhighlands.co.uk/Forum/viewtopic.php?f=9&t=75084