Friday 2nd July 2010 - Summer Holidays started at 12.02 precisely and I was out of school faster than a very fast thing. I decided to body swerve the traditional end of term visit to the pub and head straight home to prepare for my long awaited assault on the high level circuit around Loch Lyon starting and finishing in Tyndrum.

I had been well and truly bumped, Kev having called off during the week due to his presence being required on the Saturday at a funeral up in Keith and Darren having called off on the Thursday evening due to work commitments. I had also farmed the dog out to my parents to give my wife a dog AND husband free weekend, and I didn't want to spoil things for her calling off myself and staying home!

The plan was simple (or maybe not so simple if you think about it and consult the map too much!) - I was going to start by going over Beinn Odhar then beginning my circuit around the loch and over the Corbett and Munro summits in an anti-clockwise direction. Next destination after Beinn Odhar would be Beinn Chaorach, then onto Cam Chreag before heading to the Munros of Creag Mhor and Beinn Heasgarnich. From there I would continue east to the Corbett Meall nan Subh before heading around the dam at the east end of Loch Lyon and up onto Sron na Coire Cnapanaich, before heading back west over Meall Buidhe and Beinn Mhanach before finishing over Beinn nam Fuaran and Beinn a' Chaisteil, heading back out under the railway viaduct and onto the West Highland way for the few kilometres south back to Tyndrum. Simple!

I knew this was going to be a big undertaking with three and a bit days of pretty constant ascent, descent and re-ascent ahead of me, mostly in wild terrain with no paths or tracks, little chance of any other human company for most of the time and (at least to start with) a full and heavy pack. Still, I felt confident and in good sprits as at 4.15pm I left Tyndrum and headed between the Green Welly Stop and the little convenience store and onto the WHW track towards Bridge of Orchy. The sun was shining and although heavy, the pack felt good on my back. I was in shorts and short sleeves and it was the very beginning of the summer holidays. What could be better? First sighting of Beinn Odhar with Beinn Dorain in the distance About to leave the WHW and take to the slopes

The WHW is predictably busy but when I cross the railway bridge after about 1.5km and begin to climb the broad south ridge of Beinn Odhar, I'm suddenly all alone. There initially seems to be a faint path but this very quickly fades to nothing and it's just a case of picking the best looking line up the shoulder. The grassy slopes soon give way to an extensive boulder field, and the views open up behind me across towards Ben Lui and her neighbours and south east towards the Crianlarich hills. Back down to Tyndrum - Beinn Dubhcraig, Ben Oss and Ben Lui behind Ben More and Stob Binnein from just below the little lochan

As I reach the small lochan on the Argyll/Stirling boundary line just below the summit, the sky is really starting to fill up with menacing looking clouds and the wind is beginning to whip up, with a few spots of rain thrown in for good measure. I stop at the lochan for a breather and to put on some waterproofs, and think what a great place it would be to pitch the tent, but I know I've got to get a fair bit more distance under my belt tonight before calling it a day. Tyndrum from above the lochan

Shortly after this I top out at the large summit cairn where the western end of Loch Lyon and a good number of the Corbett and Munro objectives of the trip come into view to the north and east. First view of Loch Lyon amidst a jumble of hills Sun on Heasgarnich in the distance but dark clouds rolling in

The wind is really beginning to whip up now so I don't hang around too long at the summit before dropping 450 metres down the steep eastern slopes past the small lochan to the Allt Cumhang. There's a light on-off drizzle now keeping me company as I slog up the greasy grassy slopes of Beinn Chaorach and although it is still relatively early on an early July evening, things give the impression more of a autumnal evening with darkness about to close in. I had decided from the summit of Beinn Odhar that I would do Beinn Chaorach then descend to the broad col connecting it to Can Chreag and camp there for the night. However, a short distance below the summit of the former, I come across a decent flat looking spot for a campsite and decide to call it quits for the night. 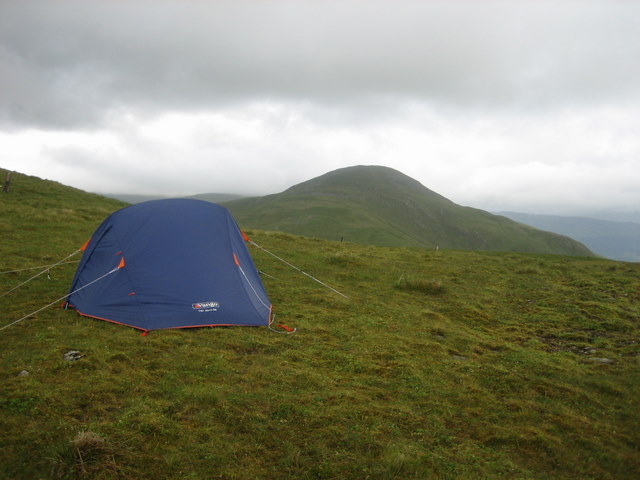 By the time I've reheated and scoffed the paella and washed it down with a mug of red wine, I can't be bothered taking a little stroll up to the summit trig point. Never mind, it'll still be there in the morning and it can't be any more than a couple of hundred metres distance - not exactly taking me too far out the way in the morning.

This really translates to me as the calm before the storm. I suspect day 2 wasn't as 'mild'. In anticipation, Graeme...

Hi Graham,
Thats a brave round you have planned and with a big pack too. Well done on getting out anyway. As Kev says its sounding like the calm before the storm. Its a bugger when the weather turns against you. Look forward to the next installment.

Try and get the reports in soon, im sure the sunday pics and report will be very very interesting indeed.