This was meant to be the Glen Strathfarrar Munros, but we felt it was simply not a viable proposition to get around in 9 hours (ish) and get out of the estate by 8.00 pm. Maybe next year.

Neill and I had long wanted to do Seana Bhraigh. Not under the pressure of time; on good paths all the way (we thought); with only 1100m of ascent; we felt that his was do-able given our ‘steady’ pace.

Suitably covered in Autan we started. Was raining so started in full waterproofs which were soon shed as it stopped raining about 0.5 km up the forestry track. Then up the zig-zags, onto and over Druim na Siobhaide to follow Allt Gleann á Mhadaidh. Neill, huffing and puffing a bit, but otherwise all OK. 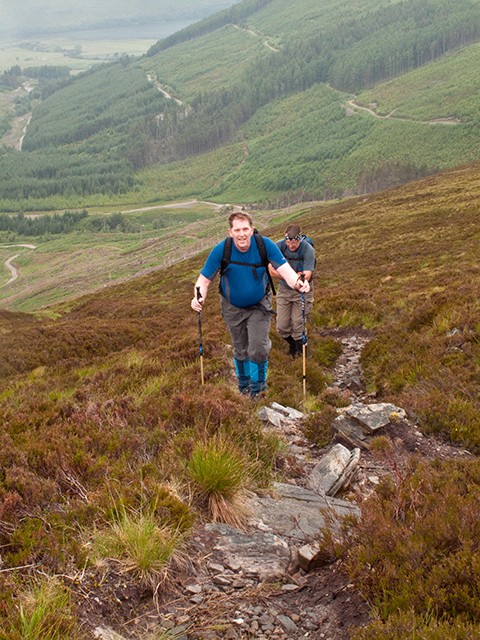 From there followed the excellent stalkers’ path towards Coire an Lochain Sgeirich and first lunch, or second breakfast (take your choice) at the first of the little lochans – lovely spot and no midges despite the calm, humid conditions. 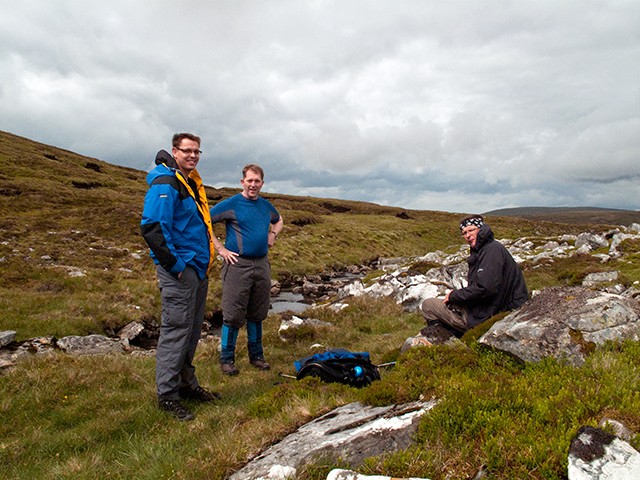 On to the plateau. Deciding when to turn N-NE away from the cairned path (running roughly W – E) would definitely be a problem in poor conditions. The path now all but disappears – footprints only obvious when the way forward is dictated by the ground. We reached the Gate of Ca’-derg (appropriately Middle Earth – expected to see Gollum pop up and show us the way). I could see the look of disbelief on faces. 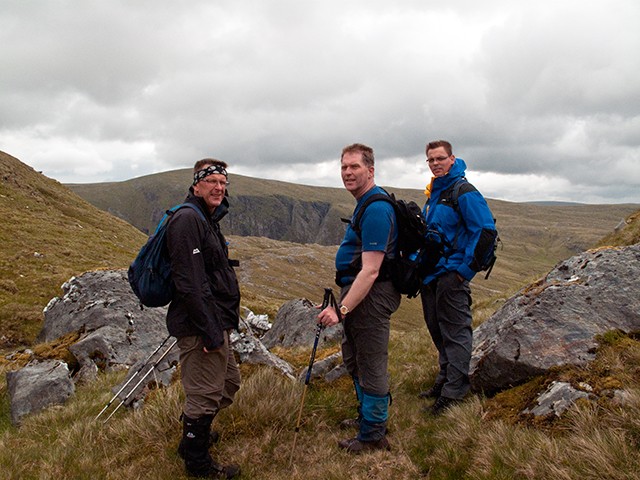 Is it still that bloody far away! 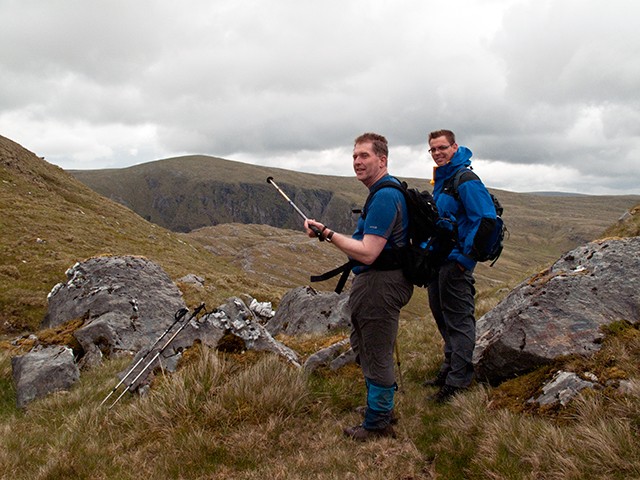 Definitely not a question and to add to the collective woe we had to lose quite a bit of height. This is definitely the least best bit of the walk; descending (and don’t forget the re-ascent on the way back) the steepish ground to the rim at the head of Gleann á Chadha Dheirg. A path can now be clearly (ish) seen. It was then a steady rise towards Seana Bhraigh and second lunch. But what views! The pics don’t do it justice. Truly in the middle of UK nowhere. Met a couple from Yorkshire (judging from the accents) on the top – they had cycled up Strath Mulzie and ascended from the N. We would see them again on Wednesday.

After a sumptuous lunch we headed back knowing what lay before us – always a problem on walks like this. However, most was down hill apart from the ascent to the Gate of Ca’-derg.

It had taken us around 6 hours to get there and 4½ to get back (including 45 mins for rests,food and pics), by which time we were fairly cream-crackered. By unanimous vote it was fish & chips at The Chippy in Ullapool, washed down by pints of AnTeallach (orange juice + water for me - driving) from the Seaforth. Heaven on earth.

Now just had the drive back to Beauly.

A long, but great day and a major achievement for the Essex and Suffolk boys (misnomer for 3 out of the 4). How would we feel tomorrow?

Great report and pics - other books warn of navigation difficulties after Coire an Lochain Sgeirich so really helpful and reassuring to see pics and hear comments on route and navigation.

Looks a fine Munro - so remote. I'll 2nd ScotJamie with reference to the helpful pics

Fine images of the plunge into Cadha Dearg and of the view from the summit towards the Creag an Duine ridge. I have visited this top from both directions and enjoyed both. The hill can be approached from the North from the top end of Ullapool and an ATB used to get quite close to the base of the hill. The Duine ridge can be used to reach the summit area and a descent made via the broad ridge with the wee lochan, in one of your images, to get back to the 'parked' velo.

Great hill - will always bring happy memories back for me as it was my final Munro:
http://www.sat.dundee.ac.uk/~arb/photos/durc/malcolm-final-munro/cIMG_4603.jpg

Did it from the N, which seemed more interesting, but must return and try it from the Inverlael side sometime. Have never really got a proper view down into the Cadha Dearg before.

Are you still able to drive up from Strath Oykel and park just below Corriemulzie Lodge ?
Did this a few years ago ,2004 I think, for my third time on Seana Braigh (+ corbett Carn Ban)
Gets you a lot closer to the hill but sure does take away the feeling of remoteness
(First time from Gleann Beag - second time was following same route as TR)
Last edited by magicdin on Wed Jul 07, 2010 9:54 am, edited 1 time in total.

We drove up in September 2006 - I assume it is still possible. Still a bit of a walk to the hill, but you're right, it makes it less remote. Handy for the Coiremor bothy though, which is a really good one these days (the MBA one is a bit of a dump, but there is a memorial one maintained by a private group right next door).

malky_c wrote:(the MBA one is a bit of a dump

No scrub that - you mean Coiremor

Yep, Coiremor. Both bothies are actually joined together, but it appears that prior to 2002 (I think) half of the building had no roof. Some group came along and renovated that half, and I would imagine the MBA side has deteriorated as no-one uses it anymore.

I'm sure I remember someone telling me there were two bothies up at Glenbeg as well? Mountain biked up that way last autumn, but didn't actually get as far as the bothy.

Copied this from MBA re Glenbeg
"The bothy is the traditional stone cottage and the corrugated iron hut nearby is also available."

It was the stone cottage I slept in

28 km seems a bit short - looks like you started from Inverlael like me? My walk was 22 miles - granted I did Ceapreachain first, it's top and the next Munro (Eilidh) and then went across to Seana Braigh and back by your route I think... I got good weather for a change which was great, although it seemed a long time to be out in very hot sun!

Did you see the black and white mountain goats who live there?

I was lucky on the day as I found a great pair of sunnies and there was only one other group on the hill... I asked if they'd dropped them and they hadn't so now I've got a great new pair (my others were knackered anyway)

Did the Beinn Dearg group last summer, brother Neill did them years ago; so was there and back along the same route which meant it was shorter. There was no way we'd got the energy to do anything else.

I've tried all sorts of training to get 'hill fit': walking with a pack full of water; walking on soft shingle beaches; the gym; running (slowly). It seems that nothing prepares you for Scottish hills like walking on Scottish hills. This is a bit of a problem if you live in Essex.

Ugh! walking on soft, sandy beaches! I once walked a mile on Harris across a beautiful (but soft) sandy beach - the next day I couldn't use my knees at all!! I wasn't saying you guys weren't hill fit though... I thought your kilometerage seemed a bit low for how far you'd gone - did you get it off a GPS or something?

mountain coward wrote: I thought your kilometerage seemed a bit low for how far you'd gone - did you get it off a GPS or something?