An Caisteal and Beinn a'Chroin - summertime at last!

An Caisteal and Beinn a'Chroin - summertime at last!


To be fair, I've only had a few days walking in Scotland this summer, and the weather's been ok for me, but my understanding is it's been a pretty miserable summer generally.

, and having to book time off work many weeks before a trip up north, it's always a gamble weather-wise, but this week it's come up trumps.!! 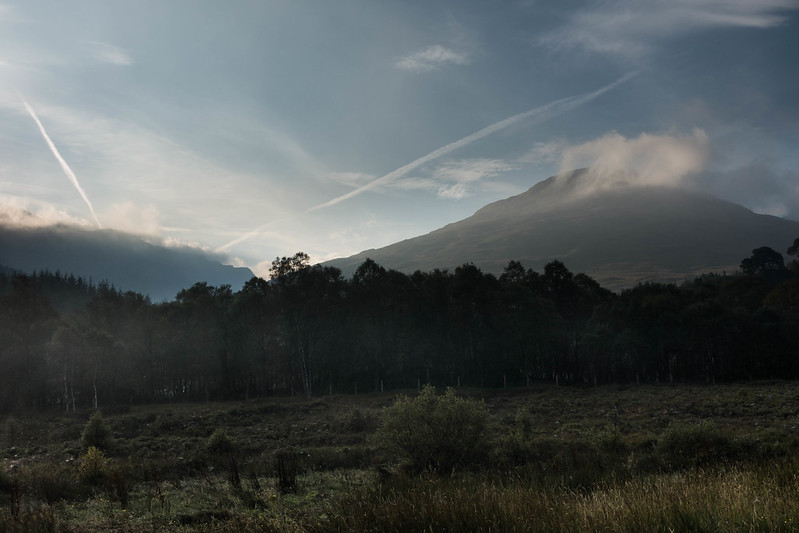 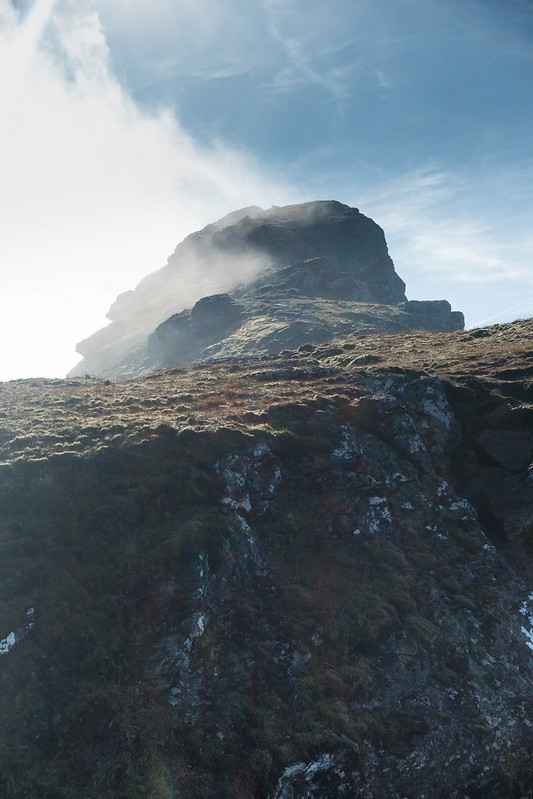 Today was for the Crianlarich pair of An Caisteal and Beinn a'Chroin. Now, is it just me, or is it surprising that hills so near centres of population and which provide fine walking are often deserted? It's been the case for me so for on all the Crianlarich hills, generally walked in fine weather, generally total solitude. Never mind, just thinking out loud.
Anyway, parking is easy in the big lay-by next to the hydro works, and a new path across to the railway underpass gets you off to a good start. I dutifully followed the WH map and left the track about 1km and made way across an essentially pathless bit of hillside, up to a pleasantly rusty, tetanus-filled barbed wire fence, which I struggled a bit to get through... 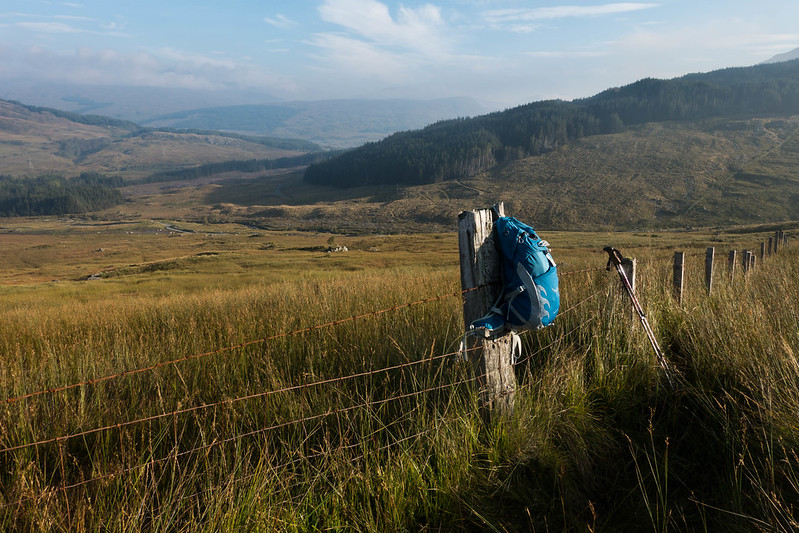 A point to note, if you're planning this walk, carry on up the hydro track to the gate, go through, and set off up the hill just past the barbed wire fence, avoids it completely.
I don't mind saying that the slog up to the ridge through boggy grass was a bit of a lung buster, having only had one day on the hill since June, I felt seriously rubbish. However, once on the ridge of Twistin' Hill the path and ground underfoot generally was excellent, the views spectacular and morale rose considerably, it was an excellent ascent to the summit, via the castle.
The ridge upwards: 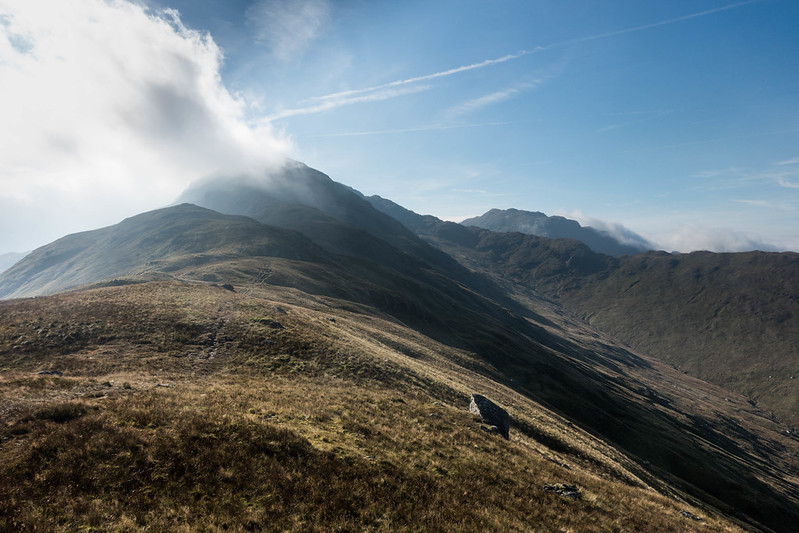 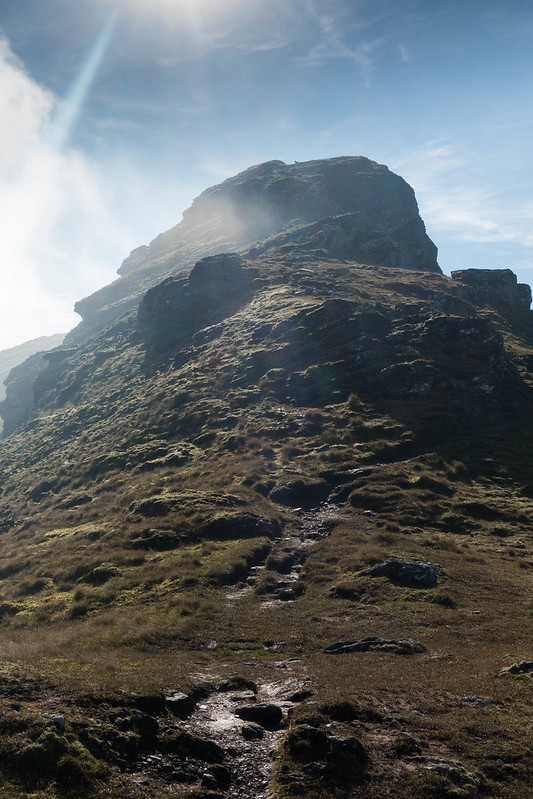 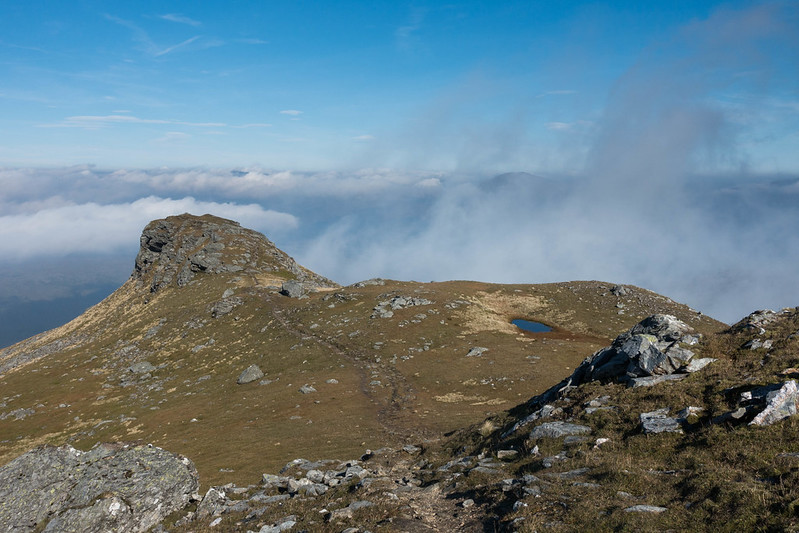 I was lucky enough to get some inversion stuff going on, particularly to the south, with Bens Lomond and Vorlich strutting their stuff through the cloud.
An Caisteal summit: 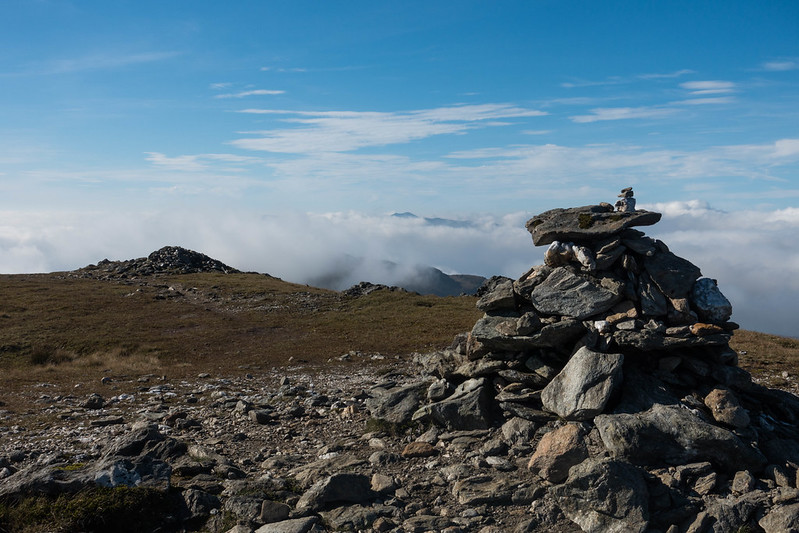 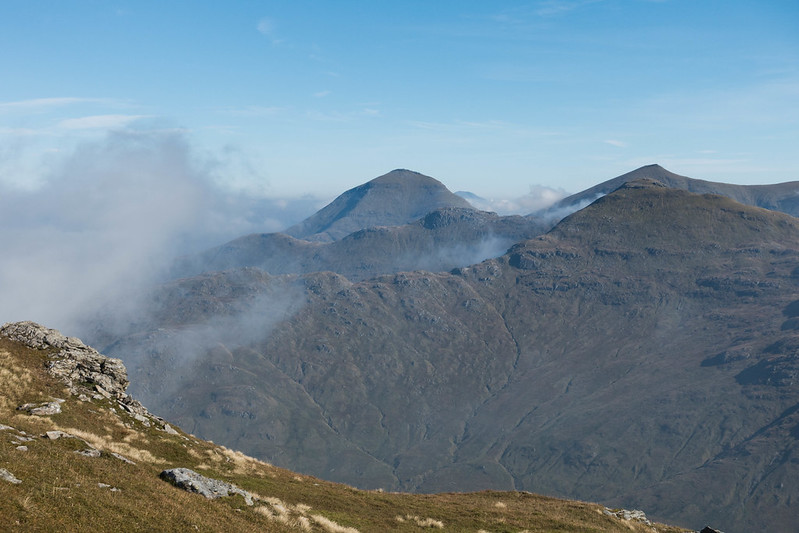 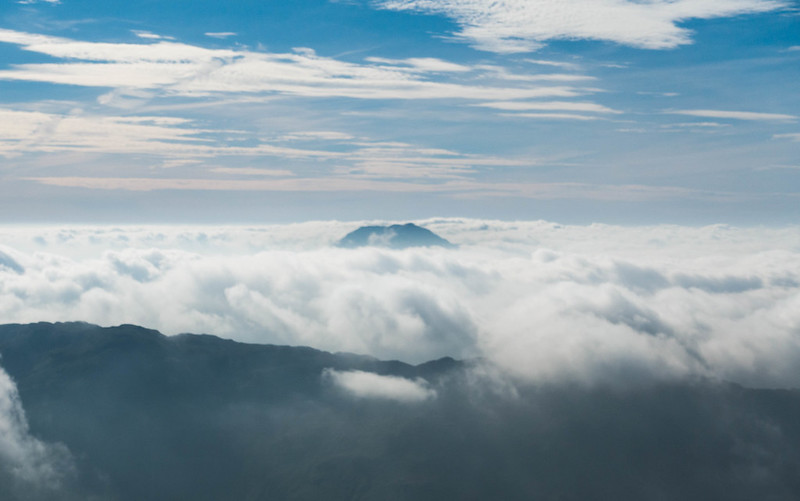 Beinn a'Chroin across the bealach: 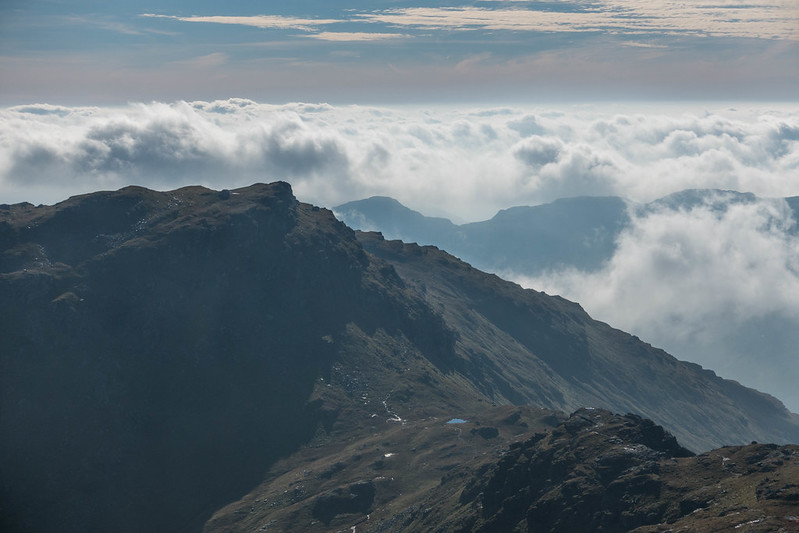 The descent to the bealach required some concentration, particularly as my legs were somewhat jellied with the sudden onset of exercise. The path twists and turns through (and over) rocky outcrops, I occasionally managed to follow it correctly. Down to the bealach, Beinn Chabhair to the right: 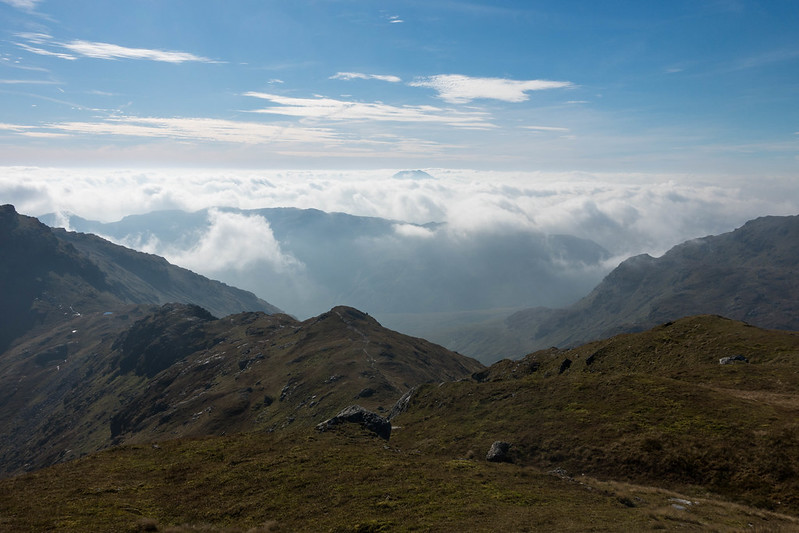 I note that some heroic types nip across to Beinn Chabhair and back on this walk, all I can say is what doesn't look too bad on the map looks very hard on the ground, a long way down and up again with no obvious lines. Not for the likes of me ...

The view ahead to Beinn a'Chroin lives up to the hype, thinking "how do I get up that?".

Luckily the path does all the thinking for you and leads off up to the right, steep at times and a bit of a mud chute at others, until taking a left switchback up to a rocky step, which proved a little challenging for the more compact, fuller-figured walker. ... but by extending my reach to get a good firm handhold I was able to get my leg over (ooh err missis), and even managed to avoid using my knees - keeps the purists happy. I wouldn't like to come down that way though ...

After that the difficulties were over and the summit(s) area of Beinn a'Chroin was quickly reached. Essentially there are three summity bits spread across a sort of hillocky plateau, and It seems that lots of chaps with beards and pipes have debated which one is the true summit, eventually deciding on the middle one. There is even a path by-passing the eastern summit, a whole 2m less in height, but requiring a drop to a small bealach and then a bit more (minimal) ascent on the other side! I guess it's where the whole Munro thing can get a tad silly, I can't see the point in getting all the way up there and missing out on the whole summit ridge experience. The far summit gives excellent views, and is well worth the extra effort in my opinion. And the lunch is excellent, best to bring your own as the facilities are limited (Trip Advisor please note

).
Looking back to An Caisteal from the "main" summit: 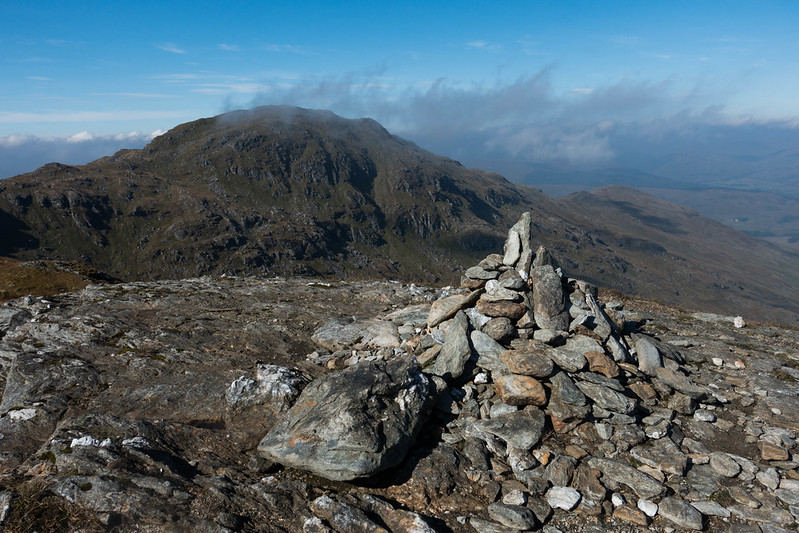 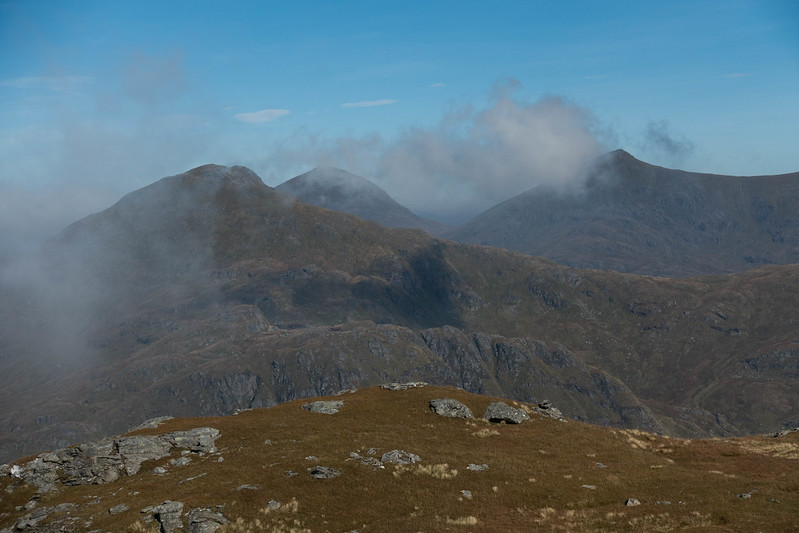 Descent by the north ridge was straightforward overall, steep and muddy in parts, but does the job, depositing you into the bog of the glenn below.
The route back: 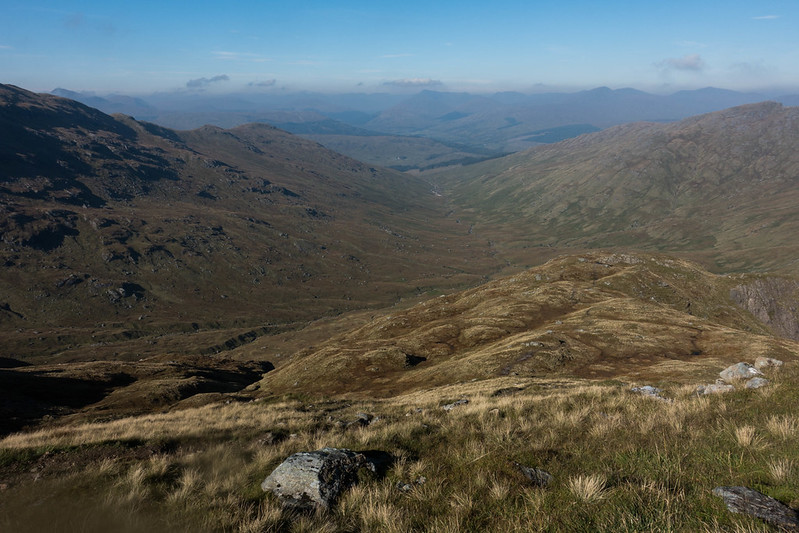 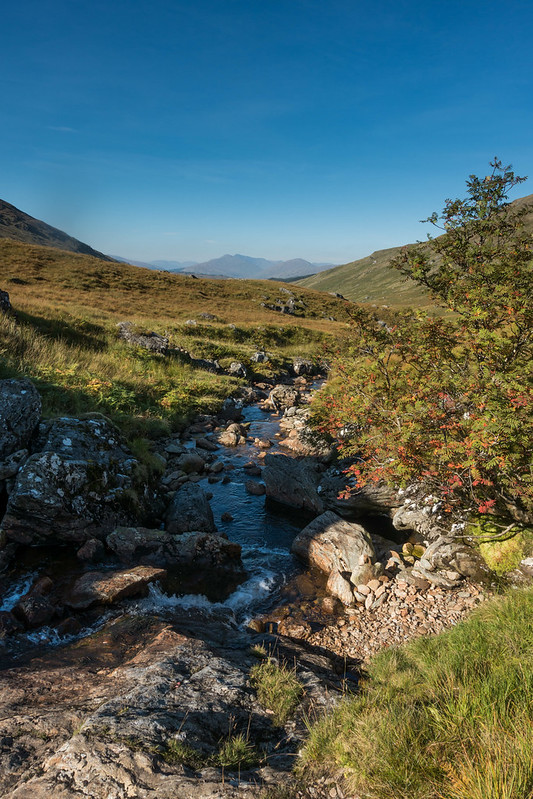 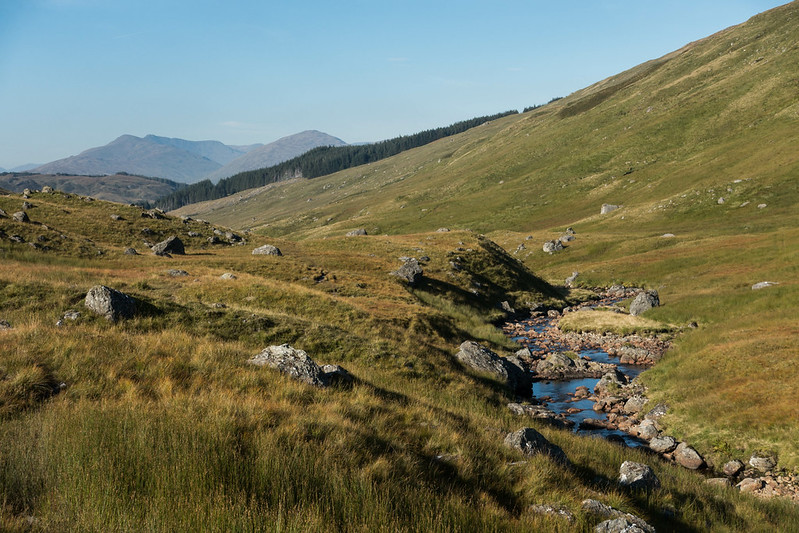 Crossing the river led to several kilometres of foul bog and mud until the hydro works were reached, from where the track took me back to the car in a bog-free manner. At the hydro works a couple of hard-hatted chaps asked me where I'd been and were quite surprised when I pointed out the route high above them, obviously thinking I was daft. All very pleasant banter though. They were the only people I met on the whole round (see whimsical thoughts above).

All in all a grand day out again for me, tickled by the lucky stick with the weather, just the realisation that I was going to have to do something about my fitness!

iv been avoiding these two because of the bog factor,but your pics make me want to give them a go.nice one well done.

The bog is no worse than Beinn Chabhair or Ben Challum, or the descent through the Caledonian Forset off Beinn Dubhchraig, just a bit tedious at the end of an otherwise great walk, but that's the joy of Scotland! Still a great walk.

2manyYorkies wrote:The bog is no worse than Beinn Chabhair or Ben Challum, or the descent through the Caledonian Forset off Beinn Dubhchraig, just a bit tedious at the end of an otherwise great walk, but that's the joy of Scotland! Still a great walk.

Even if you go to the "correct" gate at the start, it' still a tough climb and I've been out every weekend this year, and it's still a lung buster as well.

Sounds like your negotiation of the rocky step may have been a similar style to mine but it was worth it for the walk along the tops of Beinn a'Chroin.

I had read a few reports about the boggy end to this walk and had built it up in my mind to the point where I thought one wrong move and I could go under and never be seen again. In reality, I didn't think it was that bad.

Lucky you to arrive just in time for summer! Great pictures with the inversions! I agree with you about the far summit of Beinn a’ Chroin, it's definitely the best!